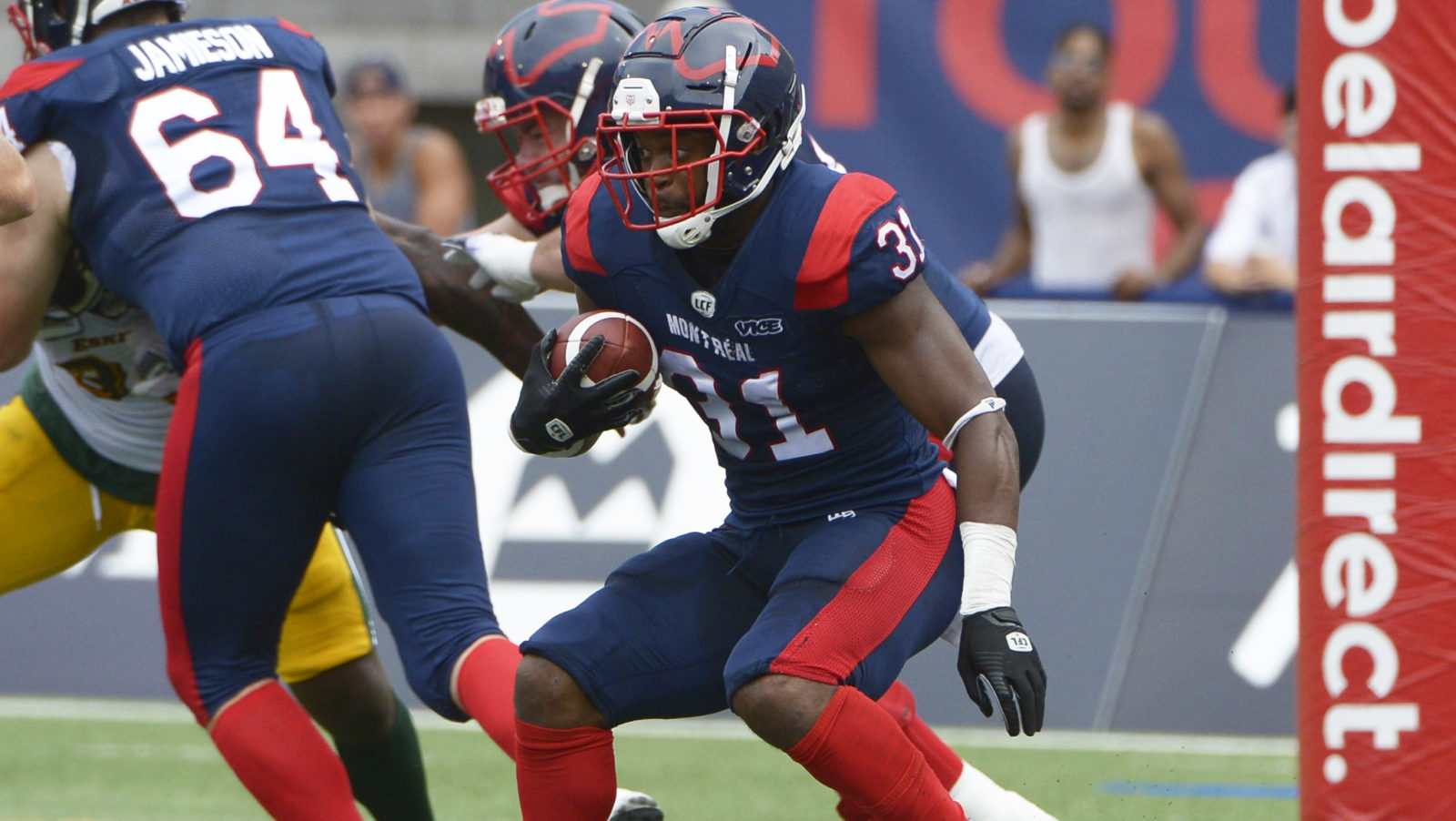 The Bombers remain without top receiver Darvin Adams ($6,712), who will miss his third straight game against the Lions on Thursday night. Chris Matthews ($3,961) continues to line up in his spot.

Despite dealing with a sore ankle, Mike Reilly ($10,155) practised this week and will start Thursday in Winnipeg. Reilly suffered the injury in the second half of last weekend’s loss to the Ticats.

Lions running back Brandon Rutley ($4,236) will sit for a second straight week. With Ryan Lankford ($4,387) handling returns and John White ($8,154) holding down the top running back spot, Rutley seems to be without a role right now in BC.

After returning to practice on Monday, James Wilder Jr. ($8,781) is listed as the backup to Branden Burks ($2,805). There’s a chance Wilder will be a scratch this week, but with a crowded backfield in Toronto, he’s a risky play either way.

Argos quarterback James Franklin ($7,118) returned to practice during the bye week but will not be on the roster for Week 10. The team’s opening day starter, who played two games before injuring his hamstring, has an uncertain future in Toronto.

McLeod Bethel-Thompson ($6,665) will get another start for the Argos in Week 10. His hold on the No. 1 job is tenuous, especially with Zach Collaros ($4,686) and James Franklin ($7,118) in the wings, but Bethel-Thompson is coming off his best game of the season.

Argos receiver Llevi Noel ($4,857) will miss a second straight week after being placed on the six-game injured list. The 28-year-old had 23 catches for 209 yards before being injured.

Recently-acquired Zach Collaros ($4,686) is not yet ready for game action for the Argos, according to Chris O’Leary. Collaros took in practice during the bye, wearing his new No. 1, but did not have a helmet on.

The injury to Llevi Noel ($4,857) should keep Rodney Smith ($2,500) in the lineup for the foreseeable future. Smith scored a touchdown and caught six of seven targets against Winnipeg and is a sneaky low-cost play vs. Edmonton.

Shaq Cooper ($5,253) is out of the lineup again for the Eskimos in Week 10. Cooper had a limited role last week but with C.J. Gable ($8,051) firmly entrenched as the Eskimos’ workhorse, opportunities elsewhere will be difficult to come by.

Returner and running back Christion Jones ($2,820) could have an expanded role on offence this week as Shaq Cooper ($5,253) sits. With his return abilities, Jones is a bargain option at running back this week.

Receiver RJ Harris ($6,263) will return to the REDBLACKS’ lineup in Week 10. Harris was Dominique Davis’ top target before being sidelined following Week 5.

Mossis Madu ($5,774) is back in the lineup at running back for the REDBLACKS as regular starter John Crockett ($4,642) won’t play in Week 10. Madu could have a chance to put up big numbers against a suspect Hamilton run defence.

Ottawa RB John Crockett ($4,642) is out of the lineup this week for the REDBLACKS. He reportedly missed practice time this week and will be replaced by Mossis Madu ($5,774

After sitting out Week 9, Caleb Holley ($2,966) is back in the lineup this week. The REDBLACKS released Noel Thomas and are also without Rafael Araujo-Lopes ($2,500) and DeVonte Dedmon ($2,581) this week so Holley’s role could be elevated.

Returner/receiver DeVonte Dedmon ($2,581) will not play vs. Edmonton in Week 9. Dedmon had an electrifying start in the CFL but reportedly had to undergo testing after being injured last weekend.

Rookie receiver Rafael Araujo-Lopes ($2,500) will be sidelined this weekend when the REDBLACKS take on the Ticats on Saturday. He caught six passes for 57 yards in his CFL debut vs. Edmonton.

American running back Cameron Marshall ($4,922) is expected to start a second straight week for the Ticats. Injuries to Maleek Irons ($4,500) and Sean Thomas Erlington ($4,873) have opened the door for Marshall to become the team’s full-time back.

Rookie running back Maleek Irons ($4,500) is likely to remain sidelined for the Ticats this week. He was placed on the six-game injured list following Week 8, leaving the Ticats’ backfield to American Cameron Marshall ($4,922).

Bo Levi Mitchell ($9,069) will not play in Week 10. Nick Arbuckle ($6,054) will get a seventh start after handling many of the reps in practice this week, though Arbuckle was also reportedly nicked up.

The Stamps will have running back Don Jackson ($5,514) back in the lineup this week. He’ll play along with Terry Williams ($5,553) in the Stamps’ backfield.

Despite returning to practice this week, Ka’Deem Carey ($5,500) will not return to the lineup in Week 10. Don Jackson and Terry Williams will handle running back duties for the Stamps when they take on Montreal.

The Stampeders reportedly fear the worst for Romar Morris ($2,716) after the running back suffered what they believe to be an Achilles injury in Week 9. If true, Morris would be sidelined for the rest of the 2019 season.

Alouettes starter Vernon Adams Jr. ($7,315) will return to the lineup this weekend. Adams left the team’s Week 8 contest after suffering an injury that forced him to sit out Week 9.

According to Didier Orméjuste, Antonio Pipkin ($6,420) has been demoted to third-string quarterback. Pipkin was replaced by Matt Shiltz during the Alouettes’ loss in Week 9.

Injured receiver DeVier Posey ($5,785) has been activated from the six-game injured list and will return to the lineup vs. Calgary. Posey’s return is welcome news for the Als following an injury to B.J. Cunningham ($5,759).

Jeremiah Johnson ($5,422) will make a second straight start for the Alouettes this weekend. William Stanback apparently can’t go due to a heel injury. Johnson should see plenty of touches against the Stamps in Week 10.