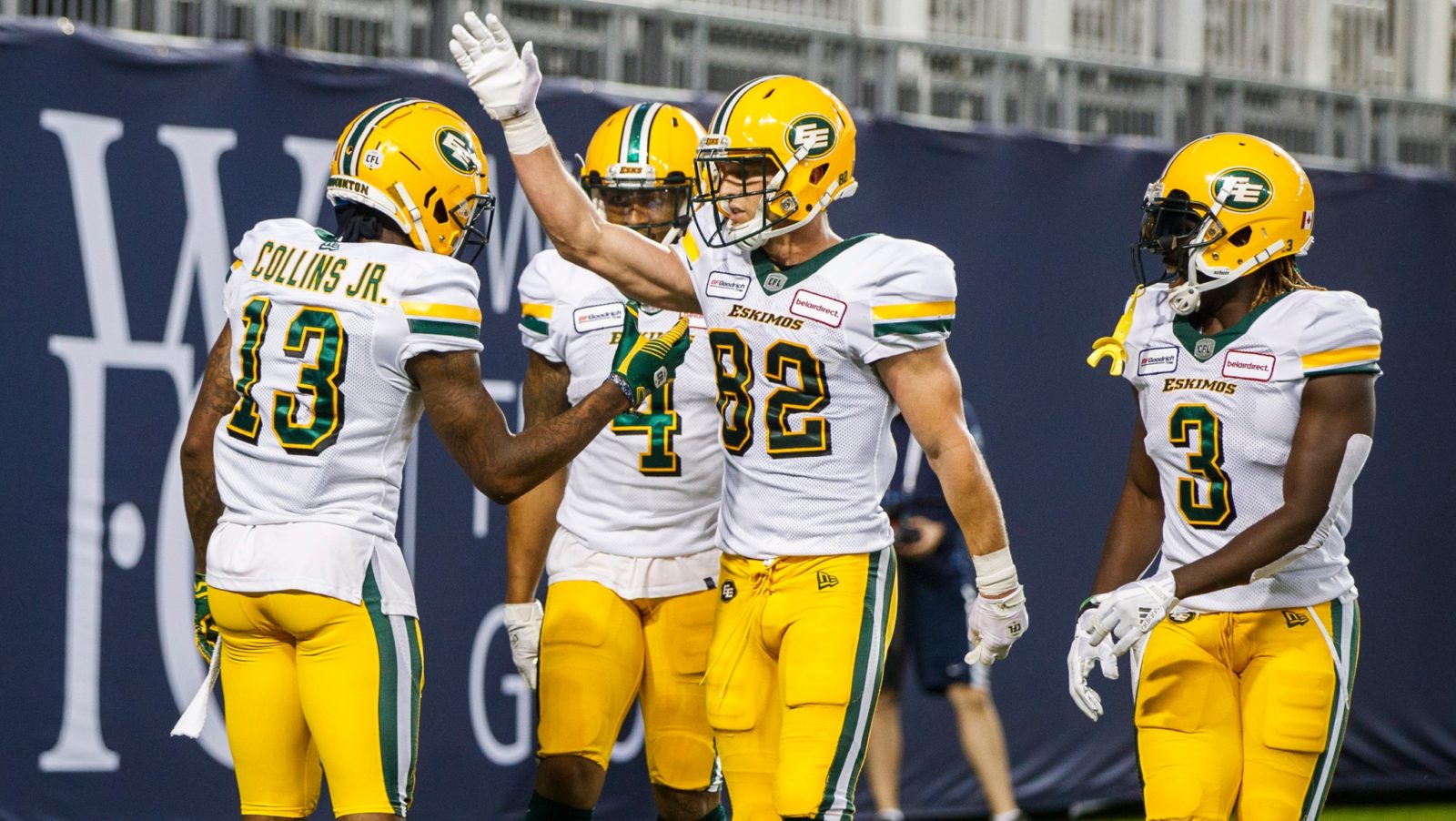 TORONTO — Trevor Harris passed for 420 yards and three touchdowns as the Edmonton Eskimos claimed a 41-26 road win over the Toronto Argonauts on Friday night. Receiver Greg Ellingson came through with a huge performance for the Esks, catching 10 passes for 170 yards and two touchdowns.

The Esks made the most of their offensive opportunities in the first half by scoring a touchdown on each of their first three red zone trips, while their defensive front stepped up with key sacks to force four straight field goals from the Argos. Edmonton added to its league-leading sack total with four sacks in the first half.

Toronto’s offence began to find the end zone in the second half, and the Argos managed to battle back and make it a one-possession game in the fourth quarter after McLeod Bethel-Thompson threw his second touchdown pass. Edmonton put an end to Toronto’s comeback attempt with Harris’ second rushing touchdown of the game.

Harris continued his strong season by throwing for 243 yards and accounting for three total touchdowns in the first half alone. The 33-year-old quarterback finished the game with five total touchdowns while completing 28 of 41 passes.

DaVaris Daniels stepped up with his biggest game of the season for Edmonton, racking up 155 receiving yards on just five catches.

The Argos were driving down the field on their opening possession after a big 29-yard run from Brandon Burks got things going, but Edmonton’s defensive front got to Bethel-Thompson for two straight sacks to stall the drive and force a field goal. Tyler Crapigna knocked the 27-yard kick through to give Toronto an early three-point lead.

Edmonton responded on the next drive with a seven-play, 75-yard scoring drive that saw Harris move the sticks with multiple accurate throws to Ellingson. Ellingson made an outstanding over-the-shoulder grab to reel in a 33-yard pass from Harris that brought the ball into scoring range, and the receiver followed it up by catching a four-yard touchdown. Sean Whyte kicked the extra point to give the Esks a 7-3 lead.

The Argos made it a one-point game later in the first quarter after an exciting 48-yard kickoff return from Chris Rainey set up a 42-yard field goal from Crapigna.

Upon getting the ball back, Harris stretched the field and sparked more momentum with a 59-yard strike to Daniels deep down the right side of the field. Daniels accelerated past Argos defensive back Jonathan Dowling to get open for the catch, and the big play led to a one-yard rushing touchdown from Harris. Whyte added the extra point to put Edmonton up 14-6 heading into the second quarter.

A few solid runs from Rainey and a 15-yard rush from Bethel-Thompson had Toronto moving the ball on the next drive, but defensive end Kwaku Boateng brought Bethel-Thompson down for Edmonton’s third sack of the half to force yet another field goal. Crapigna hit the 20-yard kick to make it a 14-9 game.

Edmonton extended its lead before half-time with another touchdown drive. Daniels displayed tremendous skill by securing a 16-yard sideline catch, and Harris followed it up with an accurate four-yard touchdown toss to receiver Ricky Collins Jr. Whyte kicked the convert to put the Esks up 21-9 with just over three minutes left in the half.

Bethel-Thompson had Toronto driving before half-time by throwing completions to receivers Derel Walker and S.J. Green before following it up with a 20-yard run, but the Esks’ defence dismantled the promising drive with a big sack from defensive lineman Jesse Joseph. The Argos opted for a 32-yard field goal from Crapigna to cut into Edmonton’s lead.

But Edmonton was not done there, as Harris found Daniels again deep down the field for a 57-yard connection that set up a field goal in the final seconds of the half. Whyte knocked the 15-yard field goal through the uprights to give the Green and Gold a 24-12 lead heading into the third quarter.

The Argos began to get things rolling offensively after the half, with Bethel-Thompson leading a nine-play, 83-yard scoring drive. Burks got things started with a 16-yard run before receiver Rodney Smith came up with a highlight-reel grab to put the offence in scoring position.

Smith stretched out as far as he could to make the 25-yard catch, and Bethel-Thompson capped off the drive with a one-yard touchdown pass to Green. Crapigna added the extra point to make it a 24-19 game.

Edmonton answered back right away on offence, with Harris orchestrating another efficient scoring drive through the air. Harris connected with Ellingson for a 19-yard gain before the receiver scored his second touchdown a few plays later on an incredible diving catch in the back corner of the end zone. Whyte added the convert kick to put the Esks up 31-19.

The Esks extended their lead in the fourth quarter with a 13-yard field goal from Whyte after the Argos got a defensive stop in the red zone. Toronto’s offence capitalized on the opportunity after getting the ball back, with Bethel-Thompson putting together a quick two-play scoring drive that saw Armanti Edwards catch a 33-yard pass and Burks catch a 27-yard touchdown. Crapigna added the extra point to make the score 34-26 with under ten minutes to play.

But Harris added his second rushing touchdown of the game down the stretch to seal the 41-26 victory for Edmonton.

Week 11 will see the Edmonton Eskimos host the Winnipeg Blue Bombers next Friday, while the Toronto Argonauts will face off with the Montreal Alouettes at home next Sunday.