That’s a wrap on Thursday Night Football for the 2019 season – and what a summer it was! I travelled across the country for 10 weeks this summer, attending every Thursday game to be a part of the TSN broadcast. I got to show fans at home the highlights from each CFL stadium, all of the unique features that will make you want to get out to a game (or two or three) before the season ends! This meant hanging with you guys in the stands, checking out tailgates, swag and maybe most fun…food!

I got to watch a lot of football and meet a lot of you in person certainly the best parts of the summer, but what I also loved was getting to explore your beautiful cities. I went to Winnipeg three times, so I now consider myself a local – visiting favourite coffee shops and restaurants between the demands of work. I got to run along the Bow River in Calgary and the Sea Wall in Vancouver. Went to spin class in Montreal and got tacos in Edmonton. Getting to visit your cities is such a privilege as a Canadian and it’s given me a window into the similarities that bind us all and the unique differences that make our country and our league special.

I went back through my pictures today to select a few highlights from the summer that I wanted to share below. I hope you enjoyed Thursday Night Football this summer and I sincerely hope you go buy a ticket and get out to your local stadium this season. The fan experience has never been better, I mean this. 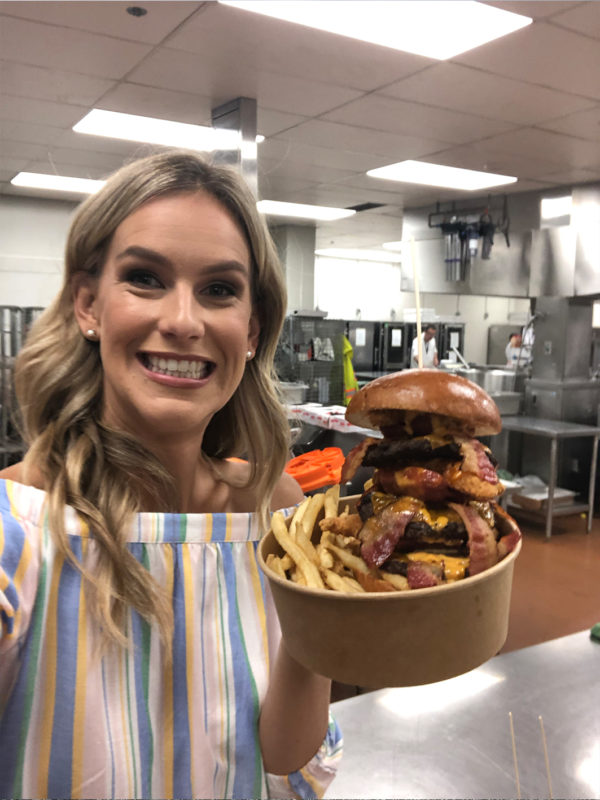 The Outrageous Burger in Vancouver! These segments are actually tough because we only have about a minute to build the burger and as you may appreciate once it’s built there is no un-doing it and it’s live. In the case of this burger it’s really hard to make believe it or not. It’s a tower of food so I let the chef handle this one once I realized the burger I was building alongside him was quickly falling apart. This Instagram worthy food was a huge trend this year and I was always on the hunt for the most selfie worthy food out there. 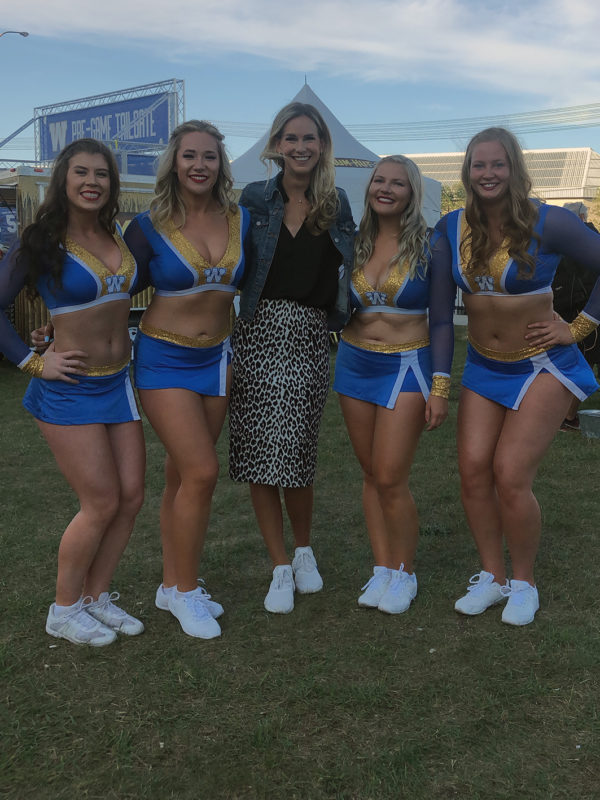 I didn’t get a picture of this segment in action but these incredibly strong and athletic women LIFTED ME UP like a cheerleader, live on TSN, while I did my segment on the Bombers tailgate. It was the idea of the camera operator I was working with that day and I just went with it. I never did any cheerleading as a kid so I had very little idea of how challenging/terrifying it is and I was basically shaking as I was hoisted high into the air. These ladies were so kind and made me feel comfortable and strong and I think you guys liked this one based on feedback on social media. 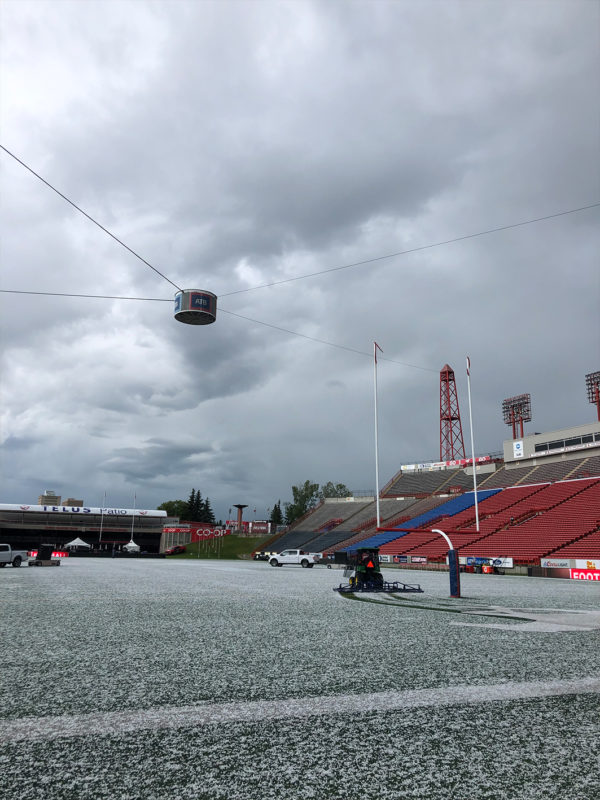 Oh hey Calgary in July! Before the game the skies opened up and absolutely pummelled loonie sized hail from the sky. As a Canadian I felt like I had seen it all weather wise but this…was something I had never experienced. It caused a few complications getting the field cleared of the hail as well as delaying the rehearsal for the Thursday Night Football band that week the Northern Pikes – but the team made it happen. 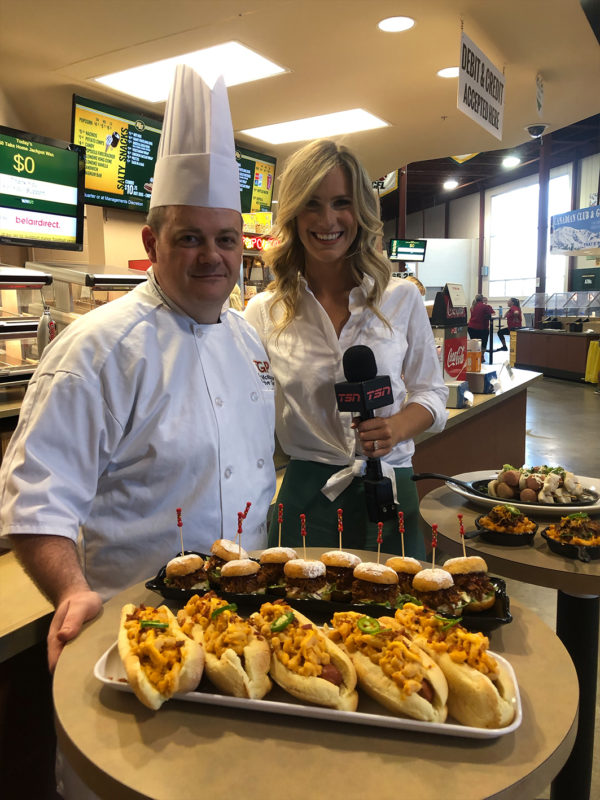 This was one of the most impressive spreads of food of the season! Typically we pick one item to highlight but in Edmonton’s case they had so many cool items to chose from I asked if we could show them all and look at this lineup. From pulled port on donut buns to Ukrainian skewers with sausage and pirogies it was one of the most unique food segments I got to do this season. 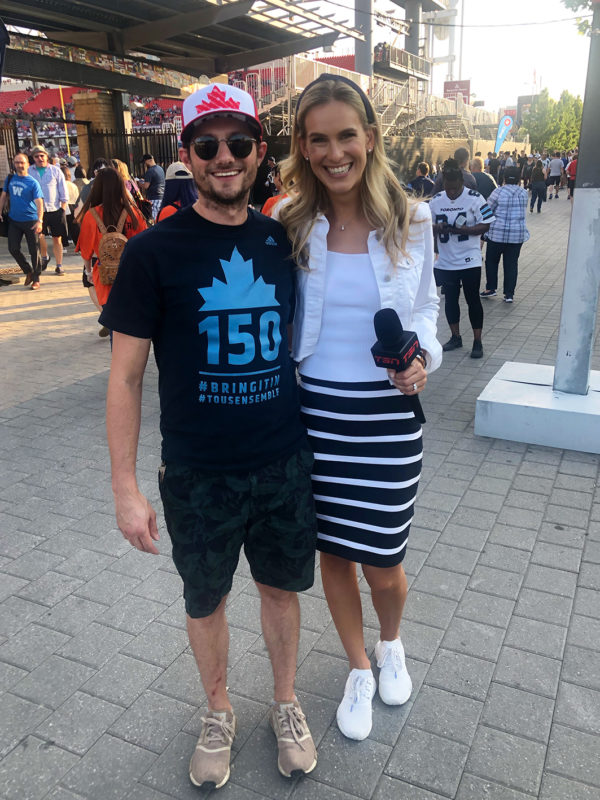 Aside from so much live football one of the best things about travelling was getting to meet new friends and spend time with old friends too. Ironically, I bumped into Max in Toronto (where we both live) but it felt like the old days getting to catchup at a CFL game. Max was a long-time CFL employee who I am sure you all remember. Seeing friends like Max and fans who are now friends across Canada was such a treat. 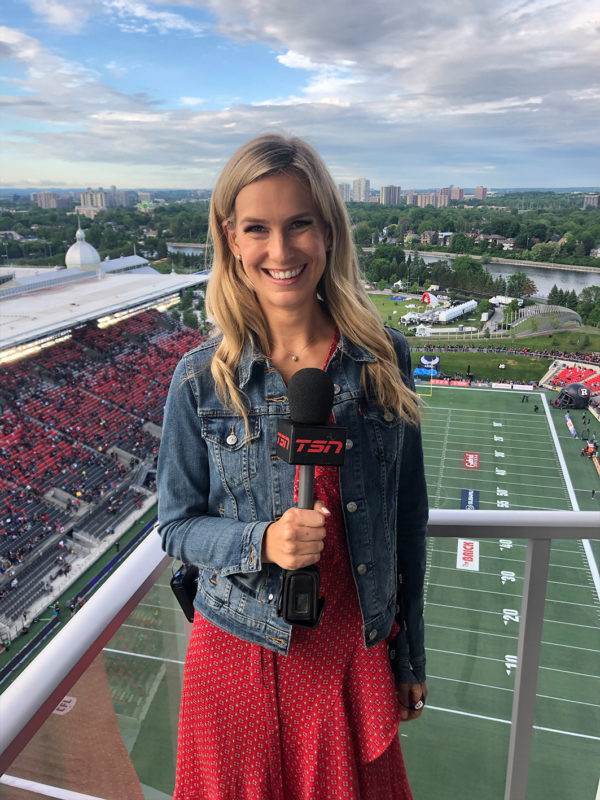 Some fans even…welcome you into their home for a TSN segment! I bumped into Rider fan Susan in Hamilton who told me she would be in Ottawa the next week watching from her friends condo above TD Place. I had always been curious about those condos so I…invited myself to the viewing party and stood on a balcony for one of my favourite segments of the season. This would never have happened is Susan hadn’t introduced herself, friendly CFL fans everywhere you make my life and job so much fun! 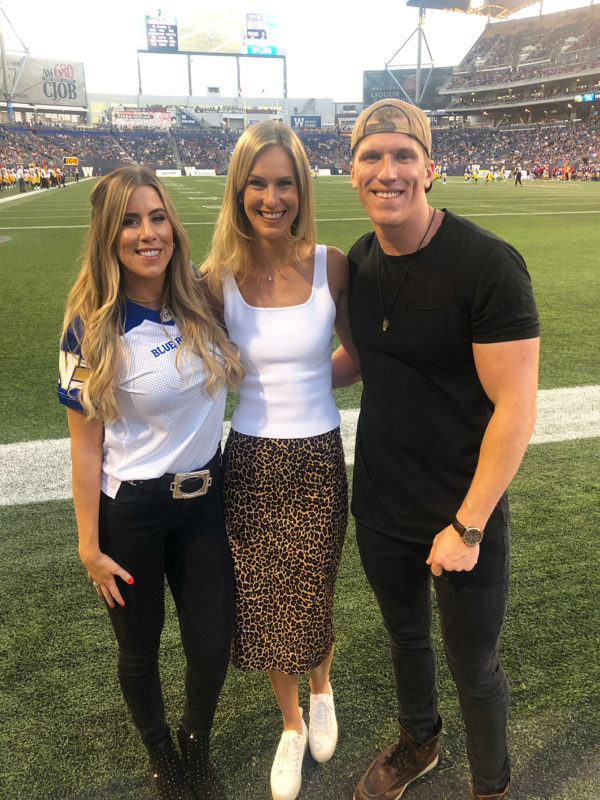 Long live the night! The beloved Thursday Night Football theme song was finally performed live this season at IG Field by these wildly talented and equally kind people. The REKLAWS have skyrocketed to the top of the country charts since we saw met them last season and their performance was long awaited after they were rained out during the season opener last year. 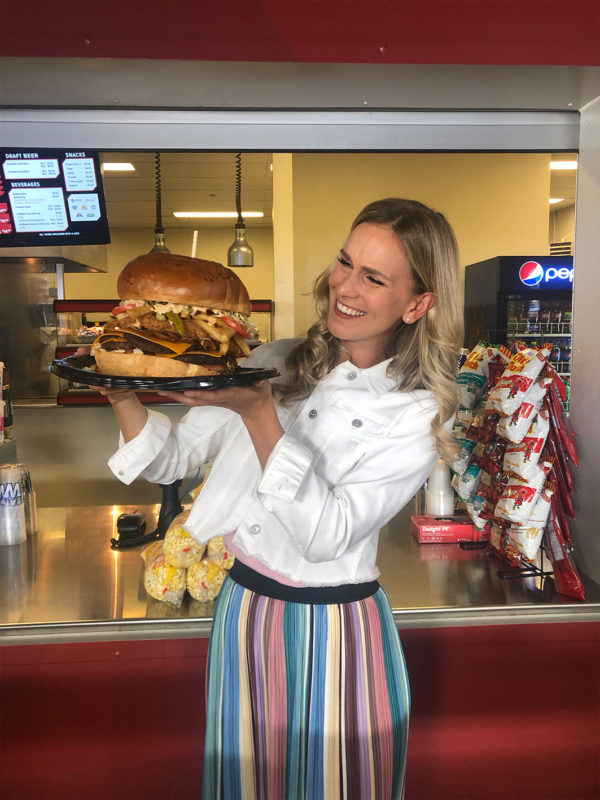 Other highlights from Winnipeg include the most ridiculous item on any menu across the league – the 5.5lb Walby burger – this one was actually too big to build on camera, it took too long so we had to just talk about it…and then hoist it up for scale. This segment was the last night of the summer and a very fitting way to end Thursday Night Football this season!