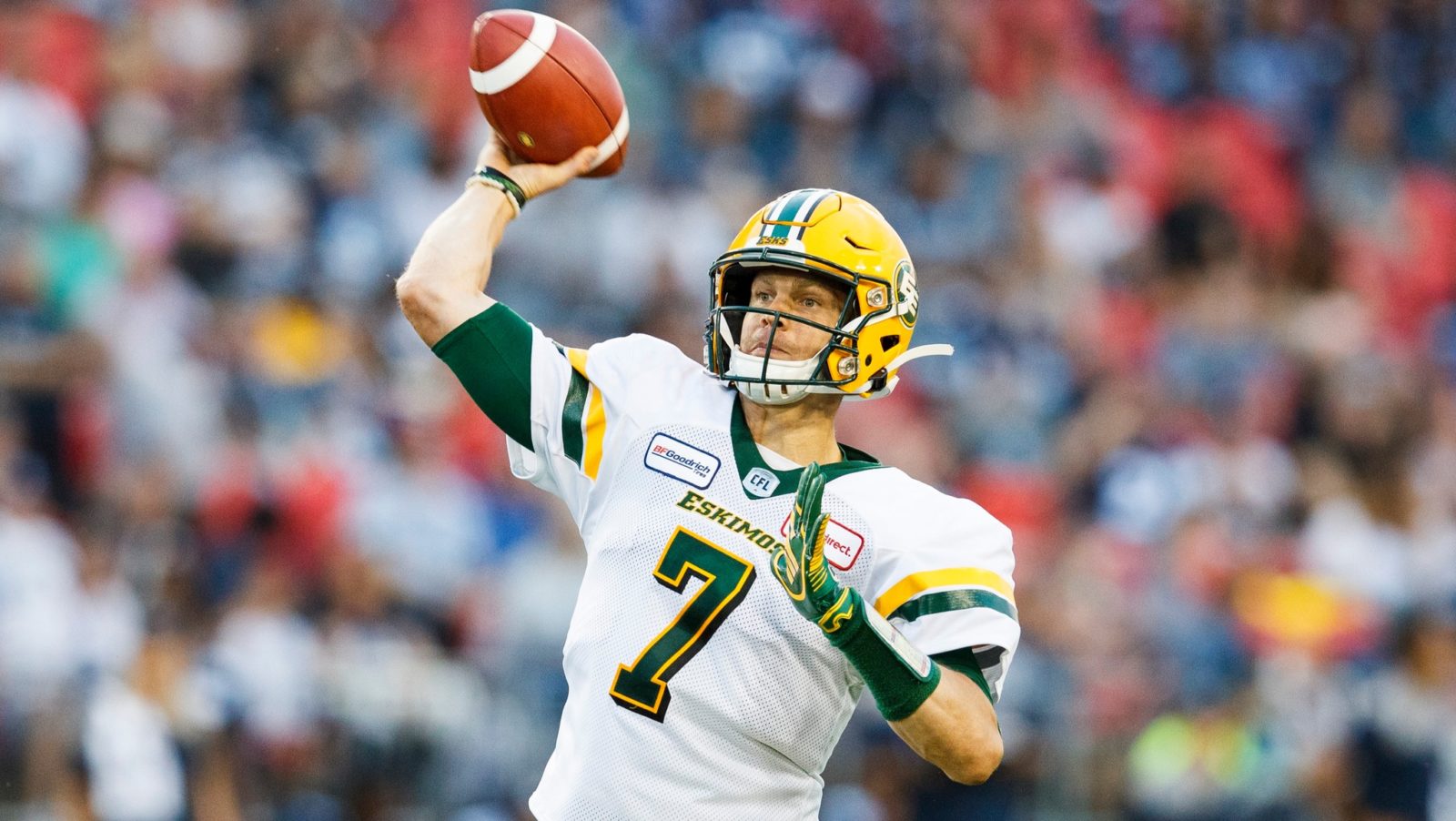 TORONTO — Trevor Harris and the Edmonton Eskimos’ passing attack put on an impressive show in the team’s 41-26 road win over the Toronto Argonauts in Week 10. Receivers Greg Ellingson and DaVaris Daniels combined for 325 receiving yards and two touchdowns while Harris went over 400 passing yards for the second time this season.

The 33-year-old quarterback has now passed for 3,051 passing yards on the season to go along with 13 touchdowns against just two interceptions. Harris is also near the top of the league with a 72 per cent completion rating despite leading the league in pass attempts by a significant margin with 361. Harris also added a pair of rushing touchdowns in the win over Toronto to bring his season total to six.

“He did a great job,” Head coach Jason Maas said after the win. “He was commanding the offence the way it needs to be commanded. There will always be stuff to improve upon, but man when he’s directing our offence the way he was tonight, it’s going to be hard to stop.”

Daniels had his best game since signing with the team, putting up 155 receiving yards on just five catches. Harris displayed both accuracy and arm strength by connecting with Daniels on a 59-yard pass in the first quarter and a 57-yard pass in the second to stretch the Argos’ defence and set up scores.

“I think he should be in the conversation for MOP right now,” Daniels said. “I think that he’s elite, man. He’s the leader of our team. We follow his lead, and he’s been balling ever since he got here. I think he’s a man on a mission, and I think everyone is seeing it now.”

Ellingson was also instrumental in Edmonton’s potent passing performance, catching 10 of 14 targets for 170 yards and two key touchdowns. Ellingson has now caught 50 passes for 690 yards and four touchdowns this season.

“We’ve been working on that since Week 1,” Daniels said. “That’s the type of team we want to be. We want to be aggressive, play fast and get the defence on their heels a little bit. I think tonight we finally have shown the glimpses of what we can be, and I’m excited for it.”

“We finally offensively played up to our capabilities for most of the game,” Maas said.

Next up for the Esks is a home matchup against the league-leading Winnipeg Blue Bombers. The Bombers defeated Edmonton by just a touchdown back in Week 3, and the Esks are eager to get another shot.

“It’s a big time game at home,” Maas said. “It’s big because it’s Winnipeg; it’s big because they got one on us already. We need to go out and defend our turf.”

The Esks and Bombers will square off at Commonwealth Stadium on on Friday, August 23 at 9:00 P.M. EDT.