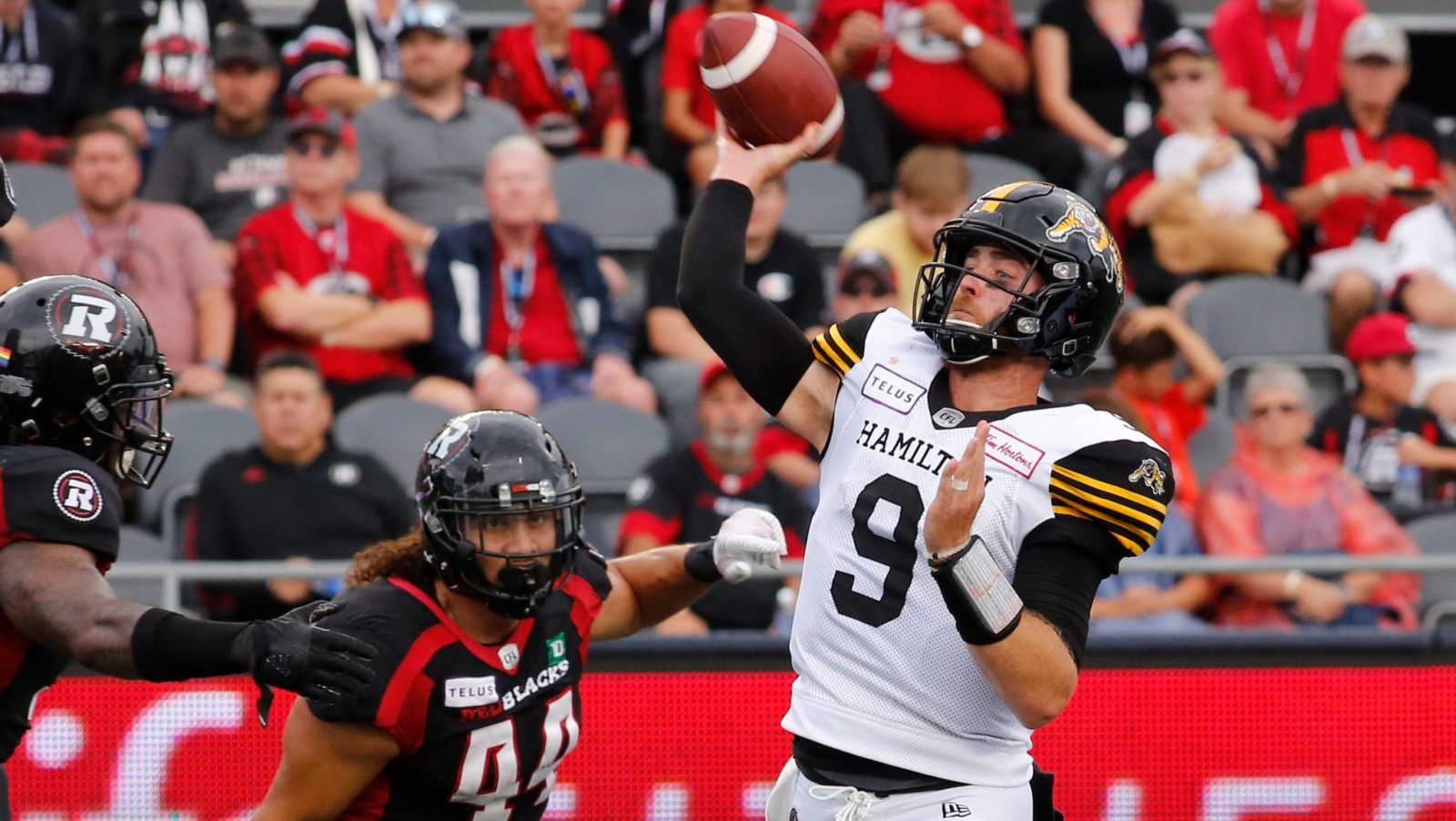 OTTAWA — The Hamilton Tiger-Cats battled their way to a 21-7 road win against the Ottawa REDBLACKS on Saturday, improving their record to 7-2 while establishing an eight-point lead in the East Division.

Dane Evans threw for 299 yards and a touchdown while completing 24 of 39 passes, and Bralon Addison led the way for Hamilton with eight catches for 100 yards.

Both teams traded single points after missing field goals in the first quarter, and a tight defensive battle continued after that with defensive back Antoine Pruneau intercepted Evans in the end zone later in the quarter.

Hamilton took the lead in the second quarter on a short field goal from Lirim Hajrullahu, and David Watford crossed the goal line on a quarterback sneak in the third quarter to help extend the lead to ten points. Lewis Ward kicked a 26-yard field goal later in the third to bring Ottawa closer and make it a one-possession game, and the REDBLACKS notched another end zone interception after that when Anthony Cioffi picked off Evans.

Ward added a 40-yard field goal in the fourth quarter that cut Hamilton’s lead down to just four points, but the Ticats answered back with a long scoring drive that ended with an 11-yard touchdown pass from Evans to Jaelon Acklin. The Ticats extended their lead with Hajrullahu’s second field goal of the game, and the defence came up with a stop on third-and-goal late in the quarter to shut down Ottawa’s late comeback attempt.

Cameron Marshall had a solid game on the ground with 12 carries for 92 yards, while Luke Tasker added 83 receiving yards on six catches.

RELATED:
» Ticats continue to find ways to win
» Images: Tiger-Cats at REDBLACKS
» By the Numbers: View Boxscore
» Watch: Ward gets standing O after streak comes to an end

The Ticats got a spark on their first drive when Frankie Williams returned a punt 36 yards, but the offence was unable to move the chains from there and opted for a 43-yard field goal attempt from Hajrallahu. But the kick went wide to the right and ended up in the hands of Stefan Logan who took a knee to concede the single point.

The REDBLACKS added a single of their own later in the quarter after Ward’s 31-yard field goal attempt went wide and Tunde Adeleke conceded the point for Hamilton. The missed kick saw Ward’s historic streak of 69 consecutive successful field goals come to an end.

Hamilton’s offence began driving down the field upon getting the ball back, with Addison showcasing his game-breaking speed on a 38-yard catch-and-run. Marshall then broke off a 17-yard run to bring the ball into scoring position, but The REDBLACKS’ defence stepped up to slam the door shut in the red zone, as Pruneau picked off Evans while covering Brandon Banks in the end zone.

The Ticats took the lead early in the second quarter on a 12-yard field goal from Hajrullahu after Ottawa cut the drive short with a key second down sack from defensive lineman Michael Wakefield.

Hamilton scored the first major of the game in the third quarter after a five-play, 44-yard drive that ended with a one-yard quarterback sneak touchdown from Watford. The drive was aided by a successful Ticats challenge for defensive pass interference, resulting in a costly penalty against Cioffi that placed the ball at the one-yard line.

Logan returned the ensuing kickoff 37 yards to give Ottawa’s offence good starting field position, and receiver Dominique Rhymes followed it up with an incredible 47-yard catch. Rhymes beat defensive back Jumal Rolle deep down the right side of the field before coming back to the ball and reaching up high to make the catch. But Hamilton’s defence continued its stingy play by forcing the REDBLACKS to settle for a 26-yard field goal from Ward, making the score 11-4.

Ottawa’s secondary came up with another big red zone interception later in the third quarter when Cioffi intercepted Evans in the end zone. The pick was initially erased due to a pass interference penalty against Cioffi, but a successful challenge from Ottawa overturned the call.

The Ticats were about to add to their lead near the end of the third quarter with another field goal, but the kick attempt was unsuccessful after the snap went high and was mishandled.

Ottawa further cut into the Ticats’ lead with a 40-yard field goal from Ward that made it an 11-7 game with just over twelve minutes to play in the fourth, but the Ticats responded after that with their second touchdown drive of the game.

Hamilton drove down the field on an eight-play, 74-yard drive that saw Marshall break free for a 20-yard run before Acklin came through with a 20-yard catch and an 11-yard touchdown grab. Hajrullahu added the extra point to give the Ticats an 18-7 lead.

The Ticats extended their lead to 14 points later in the quarter on a 21-yard field goal from Hajrullahu.

The REDBLACKS had a promising drive going with under four minutes to play after Brad Sinopoli came up with a big 26-yard grab, but Hamilton’s defence shut the door on third-and-goal to force a turnover on downs and ultimately seal the victory.

Both teams will be action again next Saturday, with the Ottawa REDBLACKS travelling on the road to face the Saskatchewan Roughriders at 7:00 p.m. EDT, and the Hamilton Tiger-Cats facing the BC Lions in a road game at 10:00 p.m. EDT.