Jones on Als’ Comeback: ‘I saw people leaving the stands’ 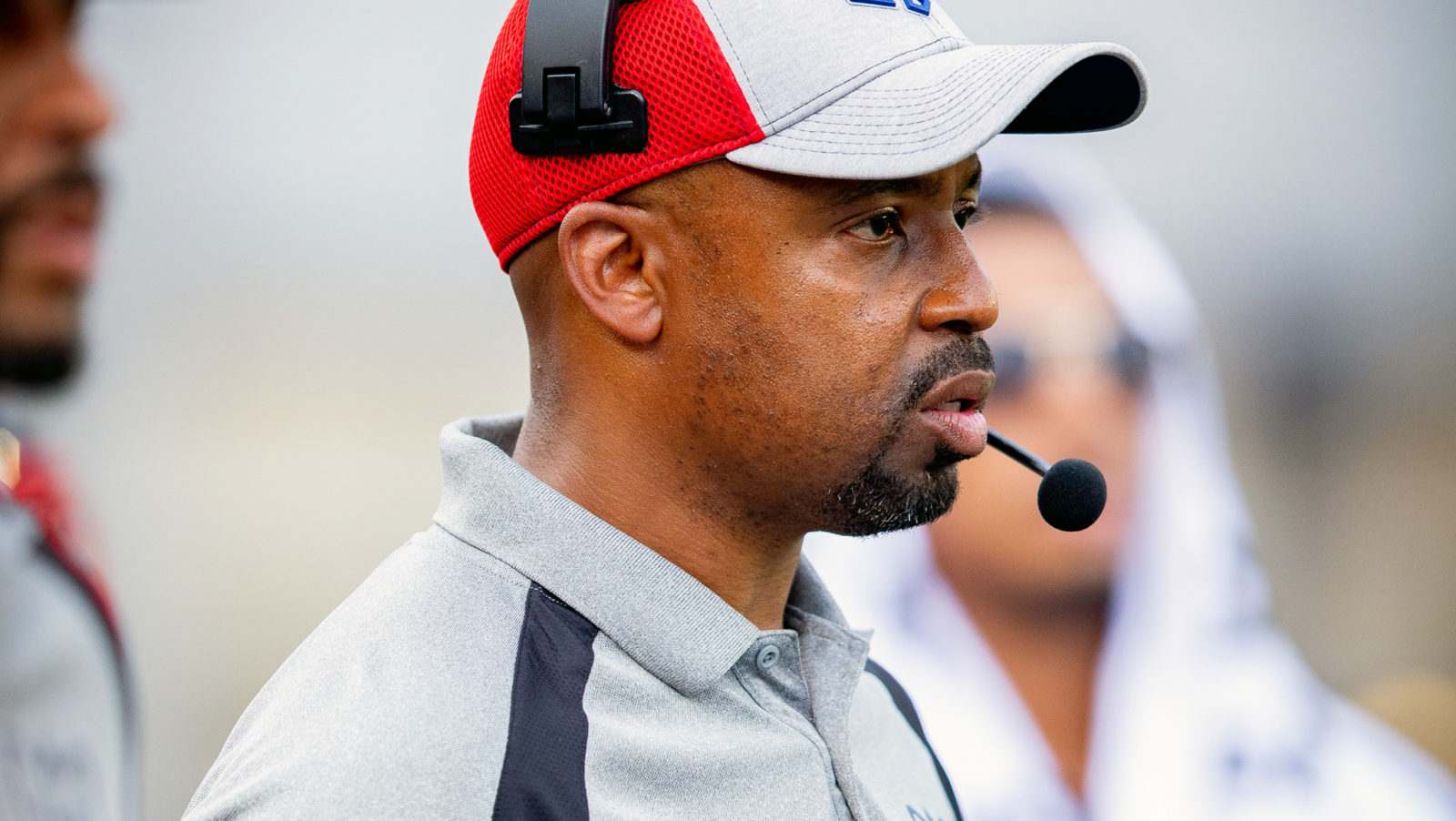 Jones on Als’ Comeback: ‘I saw people leaving the stands’

CALGARY — With time running out and his team down two scores, visiting Montreal Alouettes head coach Khari Jones looked at the crowd and saw some fans heading for the exits.

Perfect, he thought. As it turned out, Jones and the Als had the Calgary Stampeders right where they wanted them.

“I saw people leaving the stands and that excited me because I thought they were going to miss a good comeback and miss a good game, and fortunately they did,” Jones told CFL.ca after the game.

Trailing 28-17 with 1:40 left in the game, Vernon Adams Jr. drove the Alouettes 84 yards on seven plays to pull them within a field goal. After Eugene Lewis recovered Boris Bede‘s onside kick, the Montreal kicker forced overtime with a 27-yard field goal.

In the extra frame, Adams Jr. scored twice on quarterback sneaks, while a last-gasp toss from Nick Arbuckle to Eric Rogers was ruled incomplete after one toe touched out of bounds on a split-second call. The play was automatically reviewed and upheld, clinching a Montreal win.

What started as a defensive battle turned into arguably the most entertaining game of the season, helping the Alouettes end a two-game losing streak while moving into second in the East at 4-4.

“I can probably count on one hand, maybe one finger how many games like that [I’ve been a part of],” Jones said after the game. “It was pretty special for these guys to win a game like that at this point in the season and I think it’ll go a long way in the future.”

But while those who left early will be shocked to hear the result, it comes as no surprise to the Alouettes, a team that’s starting to believe in itself.

“I like this team. I’ve said it before, I think they have fight in them,” said Jones. “They just battled. We weren’t perfect but we made enough plays to win.”

“We believed in ourselves, I don’t think it was crazy at all,” added Adams. “We went down and we got it and we earned it, that’s just how it is. We knew they were the defending Grey Cup Champs, we know how hard it is to win in Calgary. It feels awesome, it feels great.”

With B.J. Cunningham out long-term and William Stanback having to wait at least one more week to return, the Alouettes received much-needed contributions from DeVier Posey and Eugene Lewis.

Posey had a game-high 181 yards on 10 catches in his first game back from injury. Lewis, who was bumped down in the lineup just a few weeks ago, thrived in a bigger role, also making 10 catches for 114 yards, a touchdown and a two-point conversion, in addition to the key onside kick recovery.

Jeremiah Johnson rushed for 107 yards on 13 carries to go with four catches, while the Alouettes racked up 558 yards of offence, combining with Calgary for 1,023 in the game.

Adams, coming off an injury that sidelined him in Week 9, was hobbling with an apparent leg injury in the fourth quarter, but toughed it out to score twice in overtime.

“Coming back from throwing a couple of interceptions in the first half and not having a great start to the game, he just kept battling. He’s a fighter. He made plays when we needed them.”

The first rushing score might have come by the hair on a chin, and on third down in overtime no less.

“I trusted that we’d get an opportunity to make a play and he did,” said Jones. “It was tough. We put a lot of trust in the sneak and they were good, we probably got it by a few inches but we got it.

“Coming back from throwing a couple of interceptions in the first half and not having a great start to the game, he just kept battling,” Jones added of his quarterback. “He’s a fighter. He made plays when we needed them. Just super proud of what he did out there.”

The Montreal win overshadowed a brilliant performance by sophomore quarterback Arbuckle, who got the start in place of injured quarterback Bo Levi Mitchell. After learning late this week that he’d get the start, Arbuckle completed 31 of 36 passes for 370 yards and four touchdowns.

Meanwhile, all four of his touchdowns were to Reggie Begelton, including two in the fourth quarter and another in overtime. The young pass-catcher finished with 173 yards on eight catches.

For the Alouettes, it was their first win at McMahon Stadium since the Grey Cup in 2009 against the Saskatchewan Roughriders in the infamous ’13th man’ game.

And while the Als weren’t making any bold statements post-game, their play on the field said some pretty strong words about this team’s ambitions in 2019.

Next stop for the Alouettes will be a rare one-off in Moncton, N.B., where they’ll take on the Argos in the CFL’s Touchdown Atlantic game.

“It was big for us, big for the organization,” said Jones. “I just found out we haven’t won here in 10 years and to win that game like that, being down in the fourth quarter and making the plays that we had to make, I’m really proud of those guys in there.”

The win may not have come without a cost, as star safety Taylor Loffler was forced to leave with what Jones described as an apparent knee injury. The Alouette coach said after the game he remains hopeful it won’t keep him out long term.