Argos are all business ahead of Touchdown Atlantic 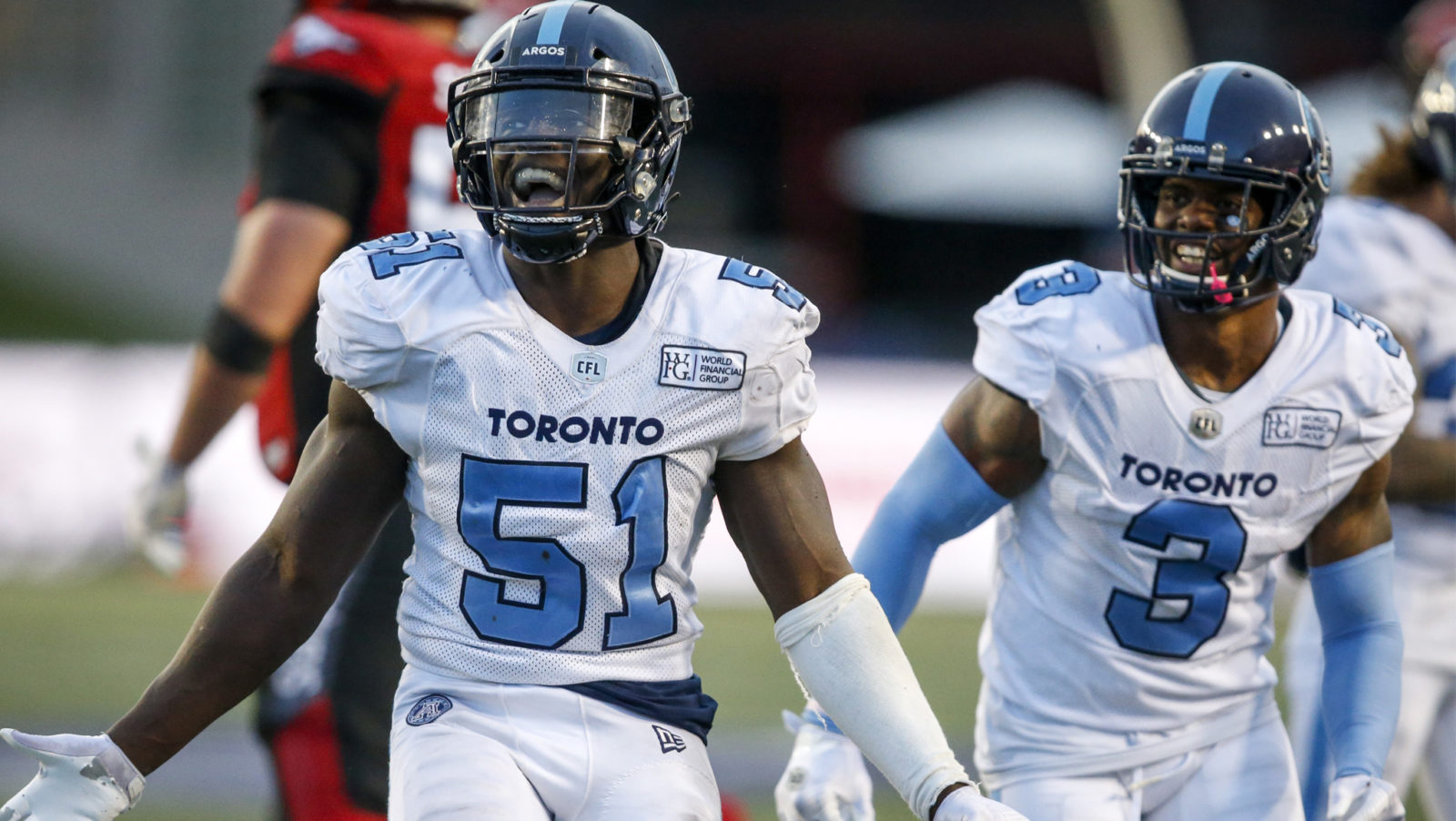 Argos are all business ahead of Touchdown Atlantic

TORONTO — At the halfway point of the 2019 campaign, Toronto Argonauts head coach Corey Chamblin is looking for his team to continue to build on what they’ve done over their first eight games.

Toronto opened the season 0-6, with that run being bookended by a 26-0 shutout defeat in Edmonton. Things looked bleak for the double blue. But they put in one of the best efforts by any team this year in a comeback victory in Week 8 against the Winnipeg Blue Bombers.

They squared off with the Eskimos again in Week 10 and were on the wrong side of a 41-26 final, but despite the loss, they took positive steps forward. With the East Division still wide open, there’s a chance for the Argos to get back into the hunt.

That begins this week, and with the Montreal Alouettes waiting on them to arrive for their Week 11 showdown in Moncton, N.B., Touchdown Atlantic could be where the Boatmen start to close the gap on the rest of the East.

“I feel like we have improved but it’s about being better,” Chamblin said following practice on Thursday. “… It’s really just about being better than our opponent. Names, faces, whoever it may be, it doesn’t matter. There’s an opportunity to make it to the playoffs and the reality is that you have to win, and that’s our biggest focus.”

One of the visible changes over the last two weeks is the efficiency of the offence. During that initial six-game losing skid, they scored just 75 total points. Over the last two games, however, they have put up 54 points against two of the best teams that the league has to offer. McLeod Bethel-Thompson is getting into a groove and finding his top targets — Derel Walker, Armanti Edwards, and S.J. Green — more often.

The question going into this game is who we’ll see feature predominantly out of the backfield. James Wilder Jr. hasn’t suited up since Week 6, but he returned to practice a week ago and should be ready to go full-tilt in Week 11. In his absence, Brandon Burks and Chris Rainey have formed a solid committee that has contributed in both the run and pass game.

For Rainey, he’ll play a big role for the Argos in this game as both a kick and punt returner. In what has been called the “Year of the Returner,” Rainey has played a big role, taking a punt back against his old team, the BC Lions, earlier in the year and coming close to hitting pay dirt on a number of other occasions.

He acknowledged that he must be doing something right in order to have a chance to make an impact in so many different aspects of the game. If he’s not scoring, he’s still flipping the field and giving the offence great starting field position. When it comes to returning a kick or punt return, Rainey breaks it down into a simple formula.

Like all of his teammates, Rainey is less focused on personal accolades and is now looking to help them get out of last in the East.

“At the beginning of this year, we went through every obstacle imaginable. I’ve never seen that happen in my career,” he said. “Sometimes, some people get the bad end of the stick. Unfortunately, we were one of them so we’re just trying to build and get out of that hole.”

For many of the Argonauts, this trip to Moncton will be their first taste of the Maritimes. Rainey is included in that, as is Micah Awe.

The 25-year-old is no stranger to neutral site games. The Texas Tech graduate played in one every year of his collegiate career, as the Red Raiders and Baylor would face off in a yearly showdown at Cowboys Stadium.

“It’s going to be awesome,” Awe said of the opportunity to play in front of the fans in New Brunswick. “I keep on ending up on teams that do these neutral site games and it’s awesome. I’m excited. It’s going to give a new feeling and it’s going to be a different feeling than usual, but at the end of the day, we’ve got to kick Montreal’s butt.”

Awe currently leads the Argos in tackles with 42 on the year. He also has a sack, an interception, and a pair of forced fumbles. He added that this is the first time in his career that he’s put up numbers in so many different areas, and while it’s been a great start to the campaign, he’s far from satisfied.

“I have that competition within myself and I see the other linebackers. I see (Cory Greenwood) and he’s leading the league in tackles by a lot. I’m always working to be better and I know that there’s always someone looking for my position.”

Toronto will go from facing arguably the best quarterback in the league to facing a pivot who’s proving to be one of the CFL’s breakout stars in Vernon Adams Jr. The Als’ signal-caller led an amazing fourth-quarter comeback against the Calgary Stampeders in Week 10, leaving everyone in shock.

On top of Adams, The Als also have a pair of solid running backs in William Stanback and Jeremiah Johnson as well as DeVier Posey and Eugene Lewis in the passing game.

The Argos will be arriving in Moncton on Saturday, but instead of treating themselves to a lobster dinner, Awe and the defence will be zoned in on getting after Adams and the Montreal offence.

“Then it’s going to be a battle and we’ll see who’s ready to win.”

This will be the second time that the Argonauts participate in a Touchdown Atlantic game. They played in the first regular-season game in Moncton back in 2010. Unfortunately for them, they lost 24-6 to Edmonton. Their sole focus when they take the field at 12:00 p.m. ET on Sunday will be to come head back home with their second win of the campaign.