Bethel-Thompson: “These next three games are our season” 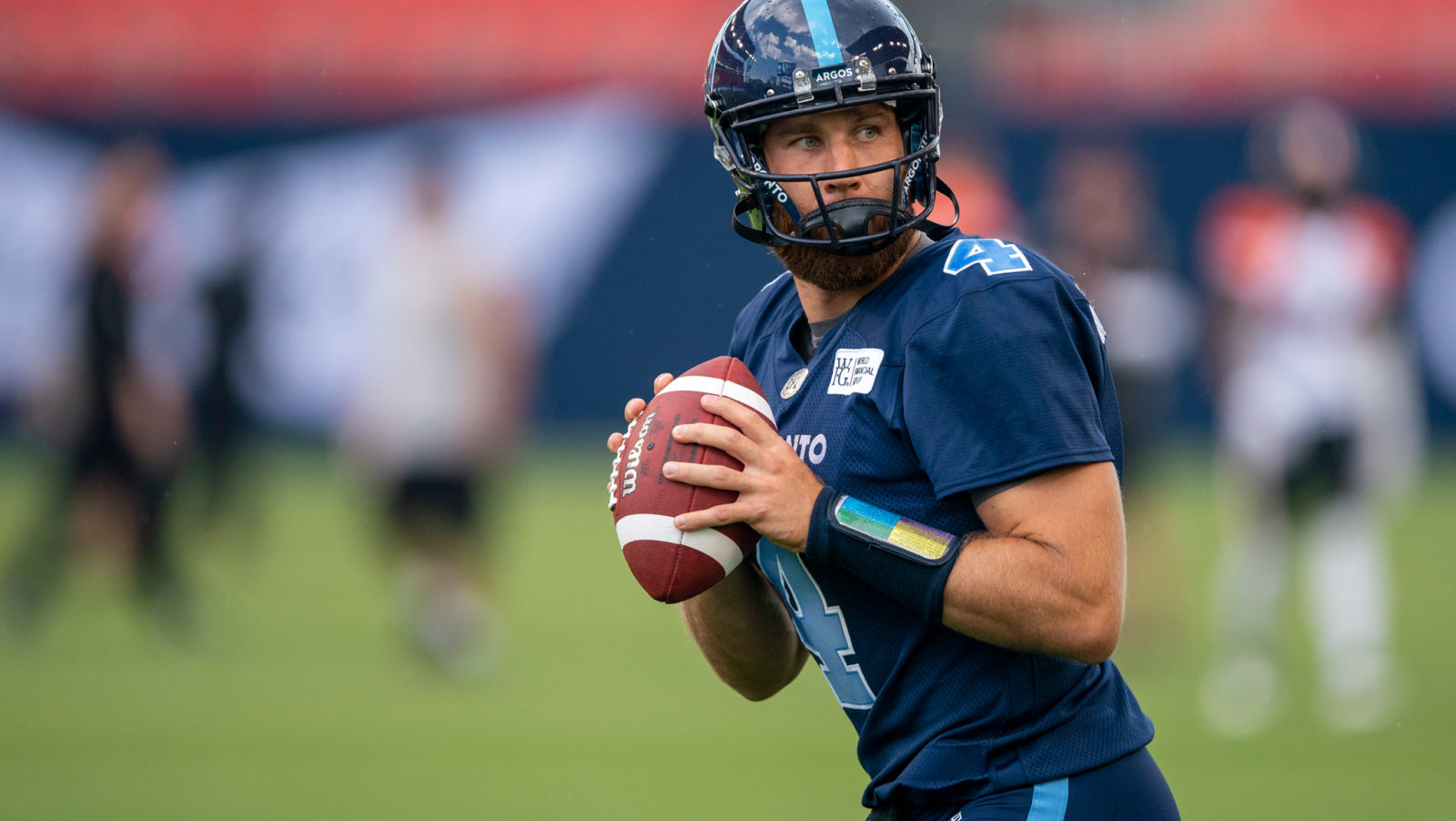 Bethel-Thompson: “These next three games are our season”

MONCTON — As the Toronto Argonauts touched down in Moncton on a windy Saturday afternoon, there was a certain urgency in the air that just couldn’t be avoided.

Sunday’s Touchdown Atlantic will be special for many of those in attendance at Stade Croix Bleue Medavie Stadium at the Université de Moncton, where the Argos will take on the Montreal Alouettes in the first regular season game in the Maritimes since 2013.

For the Boatmen, the designated home team for Sunday’s matchup, there’s no question what’s at stake.

“This is the game,” said Argos quarterback McLeod Bethel-Thompson. “These next three games are our season and this is the game we start it.”

Despite starting their season 1-7, a win on Sunday would find the Argos just two games out of second place in the East, with a half of a season of football left to play.

Coming off a comeback win over Winnipeg and a hard-fought loss to Edmonton, considered two of the CFL’s top contenders through 10 weeks of the season, there’s reason to believe in a turnaround.

“I’ve seen a lot of growth in our football team,” said Head Coach Corey Chamblin. “We’ve gotten a lot better over the last couple of weeks in a lot of areas. Now it’s time to be better in the second half of the season.”

There’s no sugar-coating it, the Argos have been the worst team in the CFL in 2019, not just in the standings but throughout several major statistical categories. Yet counting a team out entirely, especially at this point in the season, might be a mistake.

As we know well in the three-down game, the Argos wouldn’t be the first team in history to flip the script and go from chump to champ, all in the same season.

While Chamblin references the 2011 Grey Cup Champion BC Lions — “They were 1-7 and they turned it around and ended up 10-8″ — linebacker Micah Awe offered a more recent example that many in the Argos’ dressing room can relate to.

“Two years ago, when I was with BC, we were playing Toronto the first game, came in here and beat Toronto, didn’t think anything about it,” recalls Awe. “Next game we played them was the last game of the season and they just won six or seven straight and then won the Grey Cup. So our 0-6, 1-7 start, it didn’t mean anything because to me, this exact team has already done it.”

The Argos’ recent play has given the team hope. Over the last two games they’ve combined for 730 net yards, while Bethel-Thompson has thrown five touchdowns and not a single interception.

James Wilder Jr.‘s demotion has provided a potential distraction, with the running back rumoured to be on the trade block, but Chris Rainey and Brandon Burks have been a productive tandem out of offensive backfield.

Opening day starting quarterback James Franklin is back from the six-game injured list after injuring his hamstring and, according to Chamblin, is expected to see the field as well.

As Sunday caps off the first half of the 2019 season, it appears Jacques Chapdelaine’s offence is starting to take hold.

“You can talk about the new system and us being acclimated to it, you can talk about the fact that we left big plays on the field and didn’t capitalize on them,” said receiver S.J. Green, who played in the last regular season game in Moncton as a member of the Montreal Alouettes.

“I think it was just a matter of locking in to what we do mentally and Jacques allowing us to do what we do best. Over time we’ve definitely gotten better and hopefully we can continue to put some success on the field this week.”

“We’re not getting in our own way, that’s the big thing,” added Bethel-Thompson. “We’re playing efficient football, especially on first down. We have so many talented athletes and so many good players so it’s just me getting out of my own way and me getting the ball in their hands and letting them make plays.”

Soon, however, hope must translate to action. The Argos must start winning games now if they’re going to salvage their season. Otherwise, they’ll be playing for next year.

“We understand where we are,” said Chamblin. “I don’t get into the standings as much but those guys understand it. There’s nothing cliché about us winning one game at a time, it’s just about us doing the things we need to do. We’ve been close in several areas and I’m confident with the roster we have it’s time for us to get in the win column.”

A tailback with an arm

Doubling as the Argos’ head coach and defensive coordinator, Corey Chamblin is tasked with finding a way to slow down Vernon Adams Jr. Chamblin described Adams as a running back with an arm.

“When you look at those guys, you look at their backfield with [William Stanback, Jeremiah Johnson and Vernon Adams], those are three tailbacks and just one of them happens to have an arm,” said Chamblin. “It’s very difficult to prepare for a team like that and the things they can do with the options.”

Adams, still just 26 years old, has become one of the league’s biggest breakout stars in 2019, his fourth season in the league. Argos defensive back Alden Darby — who went to high school in Pasadena, just 30 minutes from Long Beach where Adams attended high school — says Adams’ success was anticipated.

“I’ve known Vernon since high school so for me it’s no surprise what he’s doing right now,” said Darby. “Just like any player you just need an opportunity to showcase your talents and abilities.

“He’s a guy people rally around. His vibe, his energy, his personality, his character. Outgoing individual, great guy, very friendly, very helpful. A good character guy, somebody that you want to be friends with and be around for sure.”

All four of the Alouettes’ wins this season have come with Adams behind centre, including last week when he led two late scoring drives to force overtime, followed by two rushing touchdowns to give Montreal a thrilling comeback win over Calgary.

“When you look at a guy like Vernon Adams, he’s able to get the ball out quick,” said Chamblin. “They’re doing a good job of making sure you don’t get to him as much, and if the coverage holds up then he’s able to use his legs.

“You have to have a plan for a guy like that knowing he can run, whether it’s called as a design play or him just reading the defence.”

With a new offensive system and plenty of new faces on both sides of the ball in 2019, Chamblin says he believes the Argos’ roster is finally settled. It appears that includes receiver Rodney Smith and Canadian tackle Jamal Campbell, who have become regular contributors on offence.

Campbell was viewed as a long-term project for the Argos when they drafted him in the third round in 2016, and it appears the wait has paid off after starting his first game vs. Edmonton last week.

“He’s such a phenomenal athlete,” said Bethel-Thompson. “He’s a big man with little man ankles. He moves so well and we see him at practice and get out in space and cover a lot of ground. It’s exciting to see his potential.”

Campbell and his quick feet caught a touchdown pass this season in a goal line set, but it appears the Argos may have a ratio-breaker after moving him into the starting lineup.

“He’s still learning week in and week out, so we know he’s getting better each week which is the exciting part but we see his potential and we see his upside.”

Smith is another recent contributor, moving into the lineup after Llevi Noel was placed on the six-game injured list. His leaping catch was one of the highlights of Week 10, while his chemistry with Bethel-Thompson from their time in the NFL has shown.

“Rod’s phenomenal, I was in Minnesota with the Vikings with Rodney and we absolutely torched the first-team defence when we were on scout team together,” said Bethel-Thompson. “We have chemistry from before. He’s a big body but he has clean hands and he runs clean routes which is rare.

“You can have those big guys that are teetery or aren’t good with their feet, but he has it all. He runs clean routes, he can go up and get the ball over people, he can catch the ball in traffic and he’s strong and he’s good with the ball in his hands after the catch. He’s the total package and it’s really comforting having him out there.”

With his 6-foot-5, 235-pound frame, Smith has been targeted 19 times in four games, converting those into 131 yards and a touchdown.