Riders capitalize on turnovers to down REDBLACKS 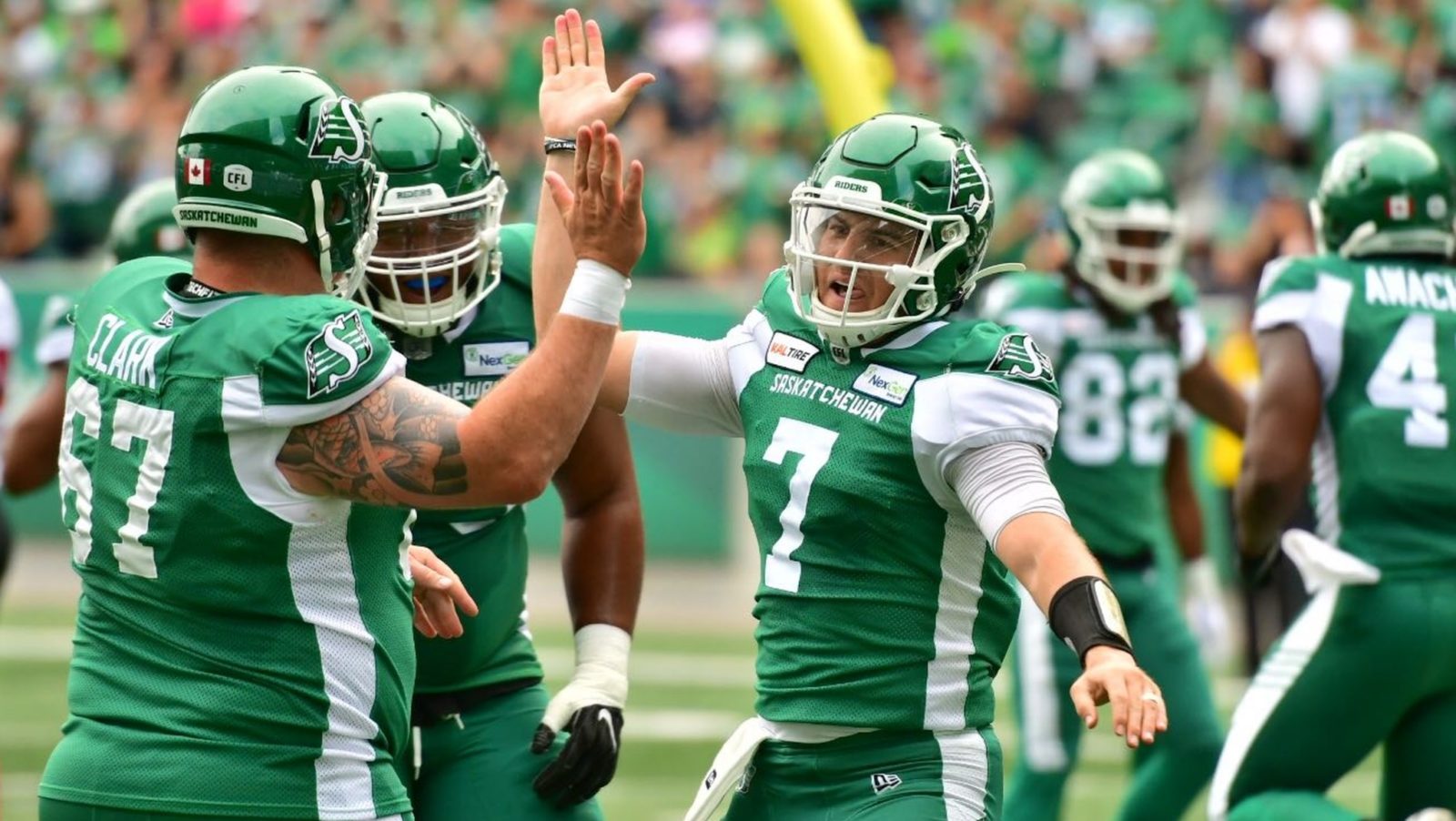 Riders capitalize on turnovers to down REDBLACKS

REGINA — The Saskatchewan Roughriders scored 24 points off five turnovers to claim a 40-18 win against the Ottawa REDBLACKS on Saturday night. The Riders now hold a 6-3 record after winning five straight.

Saskatchewan’s defence stole the show early on with three straight interceptions on the REDBLACKS’ first three possessions. The takeaways led to 17 points on two rushing touchdowns and a field goal, and Jonathon Jennings replaced Dominique Davis at quarterback after that.

Jennings helped lead Ottawa to a pair of field goals before throwing a 75-yard touchdown to Dominique Rhymes late in the second quarter to cut Saskatchewan’s lead in half.

The Riders increased their lead to 16 points late in the third quarter after Cody Fajardo threw a 15-yard touchdown to Naaman Roosevelt, and a strip-sack from Loucheiz Purifoy led to William Powell’s second rushing touchdown of the game to seal the victory.

Fajardo passed for 241 yards while completing 24 of 36 passes and also added 38 rushing yards and a touchdown on five carries.

Jennings completed 16 of 26 passes for 208 yards in relief of Davis.

Riders defensive back Nick Marshall came up with a big interception to put an end to the REDBLACKS’ opening offensive drive. Marshall read Davis’ eyes the entire way and picked off the pass intended for receiver Brad Sinopoli on an out route. Marshall returned the interception 22 yards into Ottawa territory, and the turnover led to a four-yard touchdown run from Powell that put the team up early.

Saskatchewan’s defence kept rolling on the next drive when defensive back L.J. McCray picked off Davis for his first career interception. Fajardo and the Riders’ offence capitalized on the second turnover by putting together a four-play, 39-yard drive that ended with Fajardo scoring a 14-yard rushing touchdown. Brett Lauther kicked the extra point to give the Riders a 14-0 lead in the first quarter.

The Riders’ defence stepped up again on the very next drive with their third interception of the half, as linebacker Derrick Moncrief made a brilliant read over the middle before accelerating and jumping the route for the pick. The interception led to a 46-yard field goal from Lauther, and Jonathon Jennings came in to replace Davis under centre.

Lauther added a 43-yard field goal early in the second quarter to extend the Riders’ lead.  Jennings had the REDBLACKS driving later in the quarter, but a sack from linebacker Cameron Judge on second down forced Ottawa to settle for a 36-yard field goal from Lewis Ward.

Ward knocked through another 36-yard field goal to further narrow Saskatchewan’s lead, but the Riders added a single point when a dead ball was declared in the end zone after a 51-yard punt from Jon Ryan.

Jennings gave Ottawa its first touchdown score one play later with an accurate deep pass to Rhymes for a 75-yard touchdown. Jennings displayed impressive touch to place the ball where only his receiver could make a play, and Rhymes gained 38 yards after the catch to reach the end zone.

Saskatchewan added another field goal before half-time on a 49-yard kick from Lauther, giving the team a 24-12 lead heading into the third quarter.

The Riders added to their total again in the third when the REDBLACKS conceded a single point after a 56-yard punt from Ryan. Ottawa cut into Saskatchewan’s lead with a 44-yard field goal from Ward later in the quarter, but Fajardo responded with a seven-play, 75-yard touchdown drive.

Fajardo moved the chains for four first downs with completions to Shaq Evans, Emmanuel Arceneaux, Roosevelt and Kyran Moore before finding Roosevelt again for a 15-yard touchdown. Fajardo displayed his athleticism by spinning away from defensive lineman J.R. Tavai to evade the pass rush before throwing the touchdown strike to Roosevelt near the left sideline. Lauther added the extra point to put Saskatchewan up 32-15.

Jennings helped lead the REDBLACKS to a 32-yard field goal early in the fourth quarter to make it a 14-point game, but the Riders added another point after Lauther’s 32-yard field goal attempt went wide to the left and out of bounds.

The Riders’ defence notched their fifth turnover of the game late in the quarter when Purifoy got to Jennings to force the fumble and recover the ball, and the offence capitalized once again with a 23-yard rushing touchdown from Powell on the next play to seal the victory.

The Saskatchewan Roughriders will host the Winnipeg Blue Bombers in Week 12 action next Sunday, while the Ottawa REDBLACKS will be off until they host the Toronto Argonauts in Week 13.