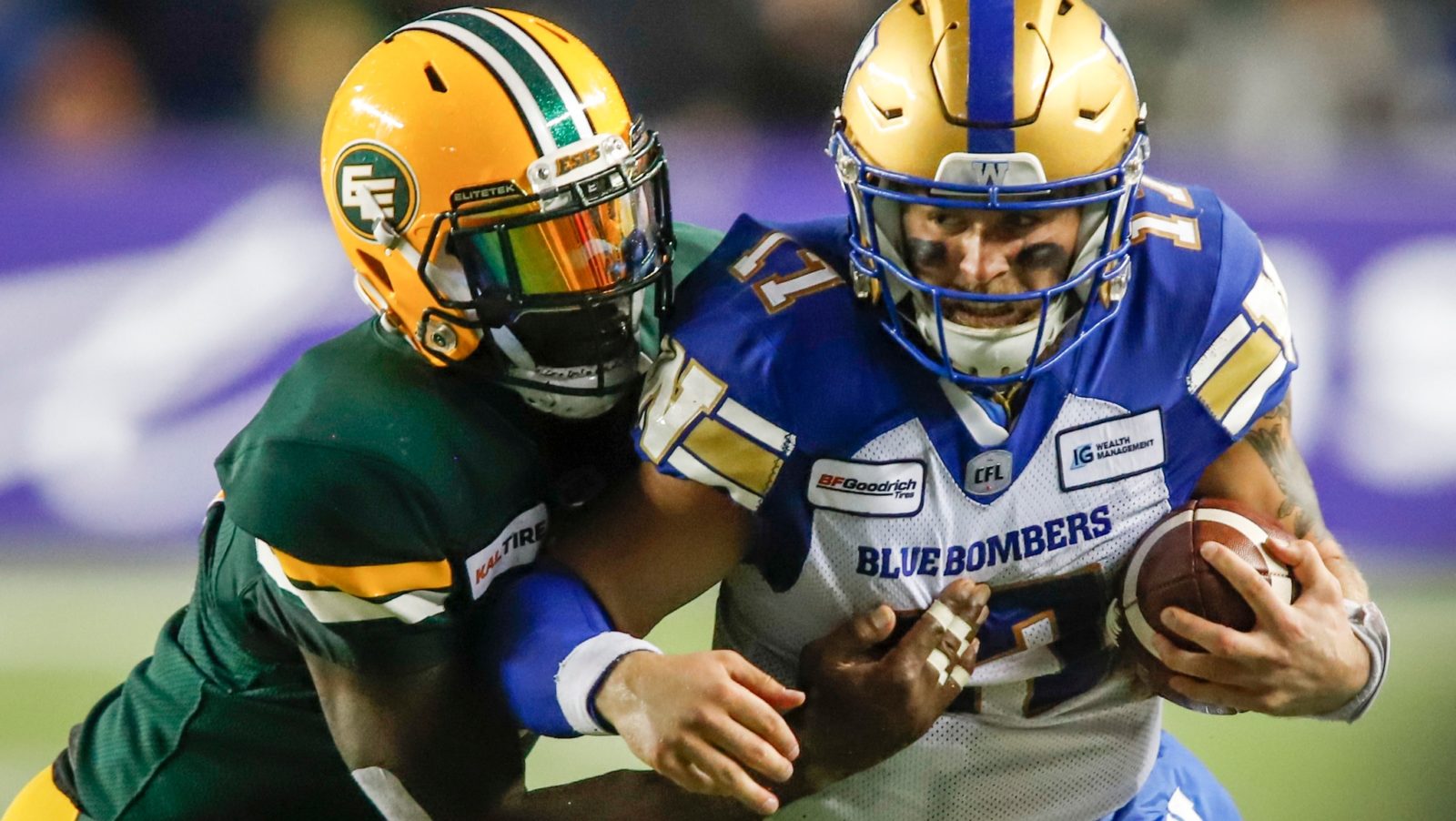 EDMONTON — The Winnipeg Blue Bombers now hold an 8-2 record after their 34-28 road win against the Edmonton Eskimos in Week 11, and once again the team relied on key contributions from all three phases to seal the victory.

“It’s important as we can continue that we get better in all three phases, but I think they understand the importance of all three phases contributing,” Head coach Mike O’Shea said after the win. “And if we get a game where it’s not working out for one phase, the other guys expect their phase to step up and make a difference, so good complimentary football.”

A pick-six and two fumble recoveries on defence combined with a pair of rushing touchdowns and four field goals to lead Winnipeg to its third straight win.

“I think all three assets of the game made big plays when they needed to,” Quarterback Chris Streveler said. “Defence made so many great plays, special teams kept us in great field position all night, Medi (Justin Medlock) making so many kicks, then offensively I felt we put some good drives together when it was crucial in the game.”

RELATED:
» Bombers defeat Esks on road to claim eighth win
» Images: Blue Bombers at Eskimos
» By the Numbers: View Boxscore
» Watch: Rios dives for the INT and takes it to the house

Streveler got the start under centre for Winnipeg with Matt Nichols out with an upper-body injury, and while the 24-year-old quarterback only completed 7 passes for 89 yards against the Esks, his solid rushing performance helped sustain drives and lead the Bombers to key points.

Streveler showed toughness and determination while carrying the ball 14 times for 95 yards, and he scored a six-yard rushing touchdown to give Winnipeg a two-possession lead with under three minutes to play.

“I feel great about his effort, and I know he’s going to get better,” O’Shea said. “And I just know that that’s who he is and if he played anything less than courageous he’d be disappointed in himself.”

Andrew Harris continued his strong season by gaining 89 rushing yards and a touchdown on 13 carries against Edmonton. Harris leads the league with 908 rushing yards while averaging 6.4 yards per carry.

“Willie was awesome, he was all over the place. ” O’Shea said. “I’ll say it again, and you can ask me again the next game and the next game, you can really tell out there how much he loves to play football. He just loves the game.”

The Bombers’ defensive front created problems for Trevor Harris and the Esks’ offence all night. Along with Jefferson’s standout performance, defensive end Alex McCalister also made a crucial play by tipping a Harris pass that ended up being intercepted by defensive back Marcus Rios and going the other way for a pick-six.

“It was just a relentless effort from everybody on the defensive line,” Jefferson said. “We came out here and executed the game plan to the tee, except for that last touchdown. You can really just give it to coach Rich (Richie Hall) for the game plan. All week we just wanted to make Trevor move around and not be comfortable in the pocket, make it hard for him to get to his first and second receivers off the read. So we did that and had a good game. ”

The Bombers will look for their ninth win of the season when they travel on the road to face the Saskatchewan Roughriders in Week 12 action next Sunday.