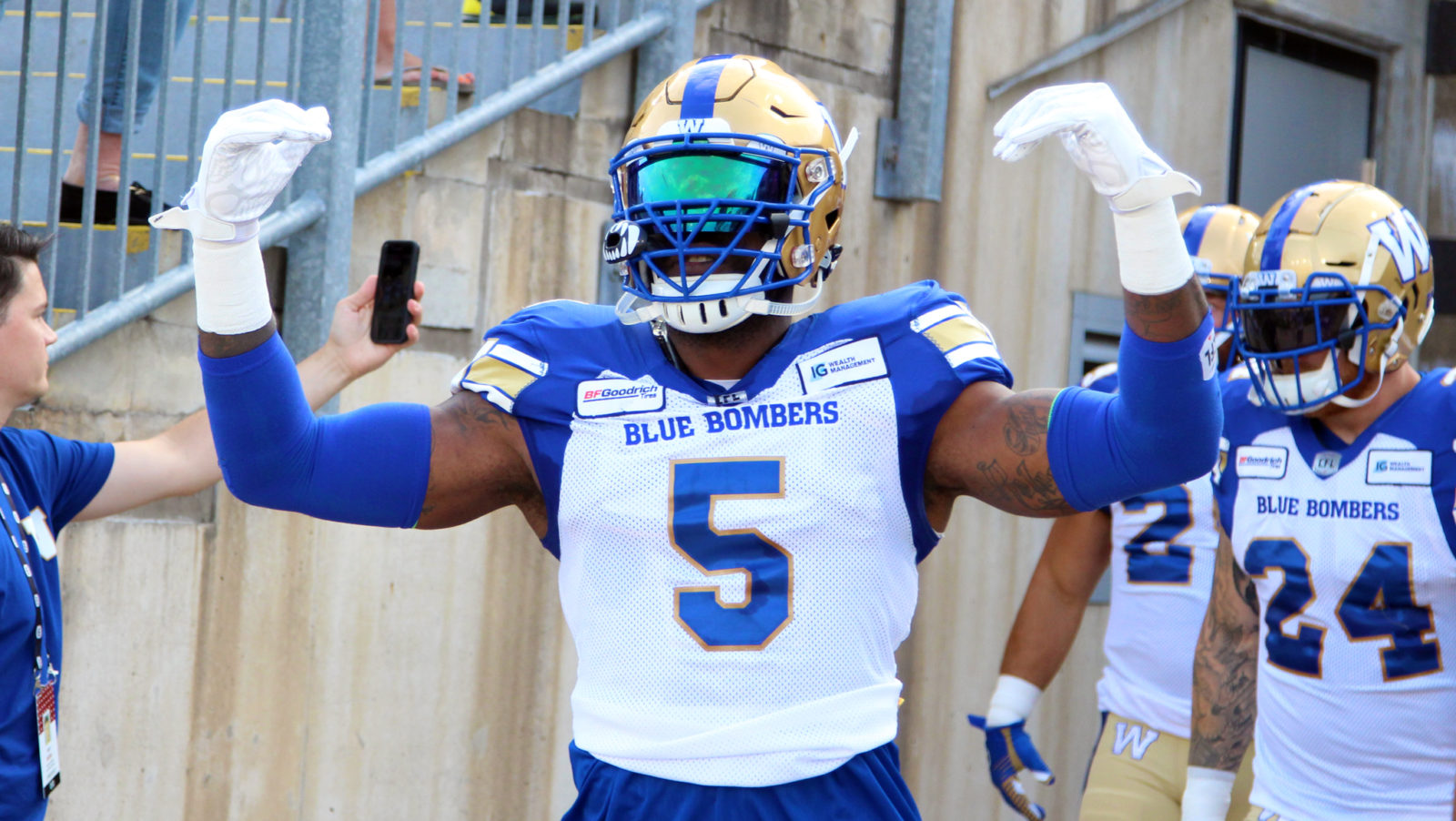 Hello, Willie Jefferson. Nice game. But if you think, for one second, that this takeaways column is gonna be dominated by you the way you dominated Friday night’s game, you’ve got another thing coming. You’re not in my head. Don’t bother.

Here are this week’s Willie Jeffersons.

Four tackles. Two tackles for loss. Three sacks. Two forced fumbles, a fumble recovery and a knockdown. Going airborne to swat a perfectly placed onside kickball out of bounds. Oh, and one kick for a single point, really.

The legend of Willie Jefferson is already incredible, and it’s growing. Here are some things about him you may not have known. But every single one of them is true:

For breakfast, Willie Jefferson pours boiling hot water into a bowl filled with roofing nails and then just chugs the whole thing.

Scientists recently discovered that most of the craters on the surface of the moon were caused by the impact of footballs that were swatted away by Willie Jefferson.

Willie Jefferson taught Bruno Mars everything he knows. But he didn’t teach him everything WILLIE knows.

Willie Jefferson built a time machine out of things he found in his garage, just so he could routinely go back in time and sack every quarterback who’s ever played the game, while they’re in their prime.

Once, while on vacation, Willie Jefferson singlehandedly straightened the Leaning Tower of Pisa. Locals complained, saying he’d ruined an incredible tourist attraction. So he bent it back.

Willie Jefferson once bull-rushed a rhinoceros just so he could sack the giraffe standing behind it.

Willie Jefferson can look into an offensive lineman’s eyes and see the future.

Once, on a trip back in time, Willie Jefferson composed “Hey Jude” during halftime of a game in 1966 (sacked Joe Zuger). Then he anonymously mailed it to Paul McCartney.

Willie Jefferson’s clothing line is by far and away the best seller back on his home planet.

Awesome sauce is made simply by liquefying Willie Jefferson game highlights. It’s a complicated distillation process done by a series of one-of-a-kind machines invented, built and perfected by Willie Jefferson.

It is a scientifically proven fact that solar eclipses are caused when Willie Jefferson raises his hand to answer a question.

Willie Jefferson once knocked out Dwayne “The Rock” Johnson by throwing Jason Statham at him.

Willie Jefferson will constantly ask you to pick a number – any number – between one and a million. But you will only ever be able to say “five.”

Willie Jefferson once laughed a belly laugh so powerful that every dog in North America (and portions of Central America and the Caribbean) hid under the bed.

For decades, Willie Jefferson was a superhero in the Marvel Universe but he quit and left it when it became “too mainstream, man. Too mainstream.”

BONUS TAKEAWAY: Willie Jefferson once had a rap battle against Drake. Before Willie had spit even his second bar, Drake laid down on the stage, curled up in the fetal position, and repeatedly whimpered “it’s gonna be okay, Aubrey. It’s gonna be okay,”

Four tackles, three sacks. Had another dominant game from the inside and was the ringleader of Hamilton’s seek-and-destroy missions on Saturday night, in Vancouver.

Add a knockdown in there somewhere, force a fumble… and you’re in Willie territory.

But only if I can wrap my head around those Chippendales-type sack dances that you do. And I’m not sure I can do that, my friend.

BONUS TAKEAWAY: Chandler Fenner’s post-knockdown celebration dance? Now, THAT’S something I’m definitely looking to perfect in time for my next appearance at a wedding reception.

BONUS BONUS TAKEAWAY: Willie Jefferson likes to relax before games by writing novels. You may know him by his pen name: J.K. Rowling.

3. THE REDBLACKS CONTINUE TO CEMENT THEIR REPUTATION

A couple of weeks ago, I mentioned that Edmonton’s Vontae Diggs let the world know how much he disliked the Ottawa REDBLACKS and how he put them in the same category as the Calgary Stampeders.

Looks like you can add the Saskatchewan Roughriders to those who have a healthy dislike of the team from The Capital.

The Riders got the win on Saturday night, despite the REDBLACKS getting to them in a game that saw Saskatchewan take sixteen penalties for 186 yards. Four were for roughing, with defensive back L.J. McCray getting ejected.

“Ottawa’s a physical team,” said Riders’ Coach Craig Dickenson, after the win. “And their O-line’s a nasty bunch. I say ‘nasty’ as a compliment. They’re pushin’ right to the whistle and sometimes a little bit past the whistle.”

You don’t see Ottawa at or near the top of too many league-wide categories right now.

But they do seem to be the leaders in one area: Getting under their opponent’s skin.

BONUS TAKEAWAY: Willie Jefferson’s first step on a pass rush has been known to halt the earth’s rotation completely. Then he restarts it again on the next play.

4. IT DON’T MEAN A THING IF YOU AIN’T GOT THAT BLING

Looks like we’ve got a brilliant new tradition coming out of Saskatchewan and I don’t just mean “brilliant” as in it’s nice and shiny. Which it is.

Roughriders’ receiver Manny Arceneaux brought in an ostentatious hunk of jewellery to share with his teammates last week; A big Roughriders pendant attached to a gold chain. A chain rugged enough to give you traction in a hip-deep prairie snowdrift.

During the team’s win over Ottawa, players took gleeful pride in hanging it around each other’s necks after great plays had been made. Arceneaux’s contribution to team unity impressed his head coach.

“He brought this chain idea that really, I think, bonded our team this week,” said Dickenson.

The pendant also carries the phrase “boycott average,” in big letters, under the logo. I’m not taking that personally unless otherwise informed.

BONUS TAKEAWAY: Willie Jefferson can shoot lasers from his eyes. But he chooses not to. Because that wouldn’t be fair.

5. KHARI JONES HAS ACCESSED HIS CREATIVE SIDE

Like an overstuffed lobster roll, Touchdown Atlantic was just jammed with goodness.

The tastiest morsel of them all was Montreal’s stunning touchdown play, in the third quarter.

It was comprised of a hand-off, two pitches, and then a beautifully placed bomb by Vernon Adams, capped by a marvellous grab by receiver Quan Bray at the back of the end zone.

BONUS TAKEAWAY: Willie Jefferson went over Niagara Falls in a barrel when he was just seven years old. Plus, he didn’t actually use a barrel. Also, he wasn’t seven, he was three.

All work and no play makes…