O’Leary: Thoughts from an unforgettable weekend in Moncton 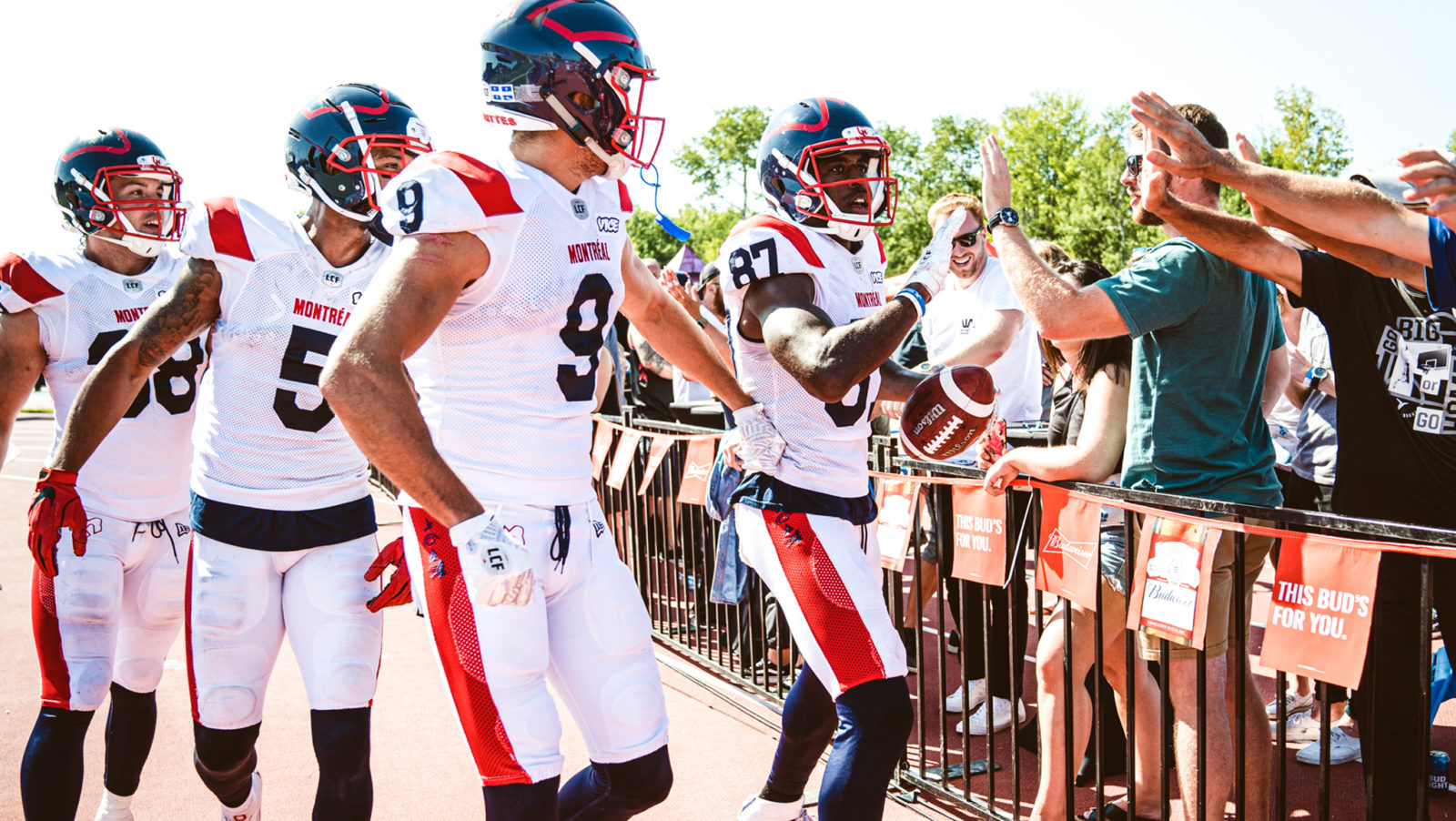 O’Leary: Thoughts from an unforgettable weekend in Moncton

There was a 16-0 Toronto lead, then a 20-0 Montreal run. Then the two teams in the Touchdown Atlantic game essentially traded punches through the second half, giving the 10,126 fans in Moncton a thrilling finish, with Greg Reid knocking a would-be touchdown out of Armanti Edwards’ hands in the end zone with no time left on the clock to preserve the Alouettes’ win.

Sitting at the midpoint of this season, Sunday’s game deserves to be in the conversation for one of the best this year.

Before we start to dive into Mark’s Labour Day Weekend games, I wanted to run through a few thoughts from this weekend in Atlantic Canada.

The CFL and Moncton have a history, with Sunday’s game being the fourth time the league has visited the city in the last 10 years. The coaches and players that may have been there in the past — like Khari Jones — might know what to expect when they make the trek into the Maritimes, but for those of us — myself included, until this past weekend — that have never been to a game out there, it lives up to every good thing you might have heard about it.

It starts with the people. There’s a warmth that you get from people in the Maritimes. Sometimes, it’s just a smile on the street from a passing stranger. Other times it’s someone going out of their way to hold a door for you, or how two random people in a coffee shop sitting near each other will start chatting. As someone that’s Newfoundland-born and Alberta-raised, with a ton of relatives still out east, I can vouch for the day-to-day friendliness of the Maritimes. We’re an inherently nice country, I like to think. Out east, they take it up a notch.

As game day inched closer this weekend, that spirit shifted into a noticeable buzz around the city — or at least in the downtown area that the CFL crew stayed — for the game and the chance to host an event.

With the Atlantic Schooners hosting the event and their logo on the field, the idea of them officially joining the league as its 10th team was always an idea floating in the periphery of Sunday’s game. While stadium specifics are an ongoing process in Halifax, the thought has always been there that Moncton could fill in as a temporary home during construction. Personally, I’d love to see what a year in Moncton would look like for the Schooners. It’s about a 2.5-hour drive from Halifax and Prince Edward Island is about 90 minutes away. If it worked out that way, it’d be a great opportunity for the organization to grow its brand in the region.

Before the pre-game activities in Moncton, I spent a day in Halifax for a story you’ll be seeing here this week. Talking with people in Halifax and some of the Maritimers that have made it as players to the CFL, they acknowledge that football in the Atlantic provinces doesn’t have the same perception, or garner the same amount of respect that it does in the other regions of the country. There are a lot of people out east that are investing a tremendous amount of their time and energy into growing the game. Seeing the development at the grassroots and high school age groups that are becoming available, you wonder what kind of effect that a CFL team could have on the region. The documentary “The Carter Effect” looked at Vince Carter’s impact on a generation of Canadian basketball players that followed his time in Toronto. What might football in Halifax and the Maritimes look like 10 years after a team started playing there?

THOSE STORIES THAT STICK WITH YOU

In my time working at newspapers and in my role with the CFL, I’ve had a lot of conversations with people about some very difficult things. When I called Dale Russell on Friday in Moncton, I didn’t know what to expect. Her 19-year-old son Triston Reece was murdered a month ago in Halifax. Police have no suspect at this point. What I got on the other end of that phone call was one of the most incredible, inspiring people I think I’ll ever encounter.

Dale did the coin toss to Sunday’s game. She wore Triston’s Citadel High School jersey. She had a dozen supporters with her on the field, some family members, others some of hers and Triston’s closest friends. What she’s going through could cause someone’s life to crumble and she’s been a rock through the past month. She’s publicly forgiven her son’s killer and encouraged them to turn themselves in and explain to her why they took her only child. Beyond seeing justice brought to Triston’s killer, she doesn’t want to focus on the last day of Triston’s life; she wants to celebrate and pay tribute to all of the ones before it. Sometimes through the darkest things that life can throw at us, people like Dale Russell find ways to shine through them.

HOW GOOD COULD THE ALS BE?

Despite their success with their backs against the wall, the Alouettes don’t actually enjoy being in those situations. They pulled off a miraculous comeback double OT win two weeks ago in Calgary and followed it up in Moncton by holding off the Argos in the game’s final play to win their second in a row. Montreal is second in the East at 5-4 and goes into the second half of the season above .500 for the first time in seven years.

Vernon Adams Jr. is establishing himself as a rising star in the league. Khari Jones got the head coaching job six days before the season started and looks like he’s been doing it his whole life. After years of being left out on the field for extended stretches, the Als’ defence doesn’t have to be leaned on for wins anymore.

I wonder how good this team could be. Not just next year and beyond, but this year. The Als were the league’s doormat for the last few years and went into this season with very little change expected from them. Hamilton is comfortably in front in the East, but Ottawa is struggling and the Argos are likely out of the playoff hunt. It’s been a long time since we’ve been able to say this, but if they keep winning games the Montreal Alouettes will be a tough out in the playoffs. A lot can still happen good or bad, but the Als are one of the best stories of this half-completed season.

At 1-8, the Argos are in a deep hole, one that may be too deep to dig out of. But if you watched them on Sunday, you saw a team that’s vastly improved from the start of this season. They were up 16-0 (their best start to a game this year) and they dominated the time of possession in the first half while stifling the Als’ offence. Had they not turned the ball over late in the first half deep in the Als’ end, they might have been well on their way to doubling their win total.

Sunday wasn’t their day, but I feel like the Argos are going to have their day sooner than later. A win in Hamilton on Labour Day would be something for Argos fans to rejoice over, but it’d be a tough task. A game to keep an eye on if you’re an Argos fan might be the one that comes after Labour Day. They’re in Ottawa on Sept. 7 to kick off a triple-header of action.

UNRELATED TO MONCTON BUT…

How about Willie Jefferson? Don Landry has already properly celebrated him so I’ll only say this: Willie Jefferson is the CFL’s premier defensive game-changer and we’re lucky to get to see him week after week.