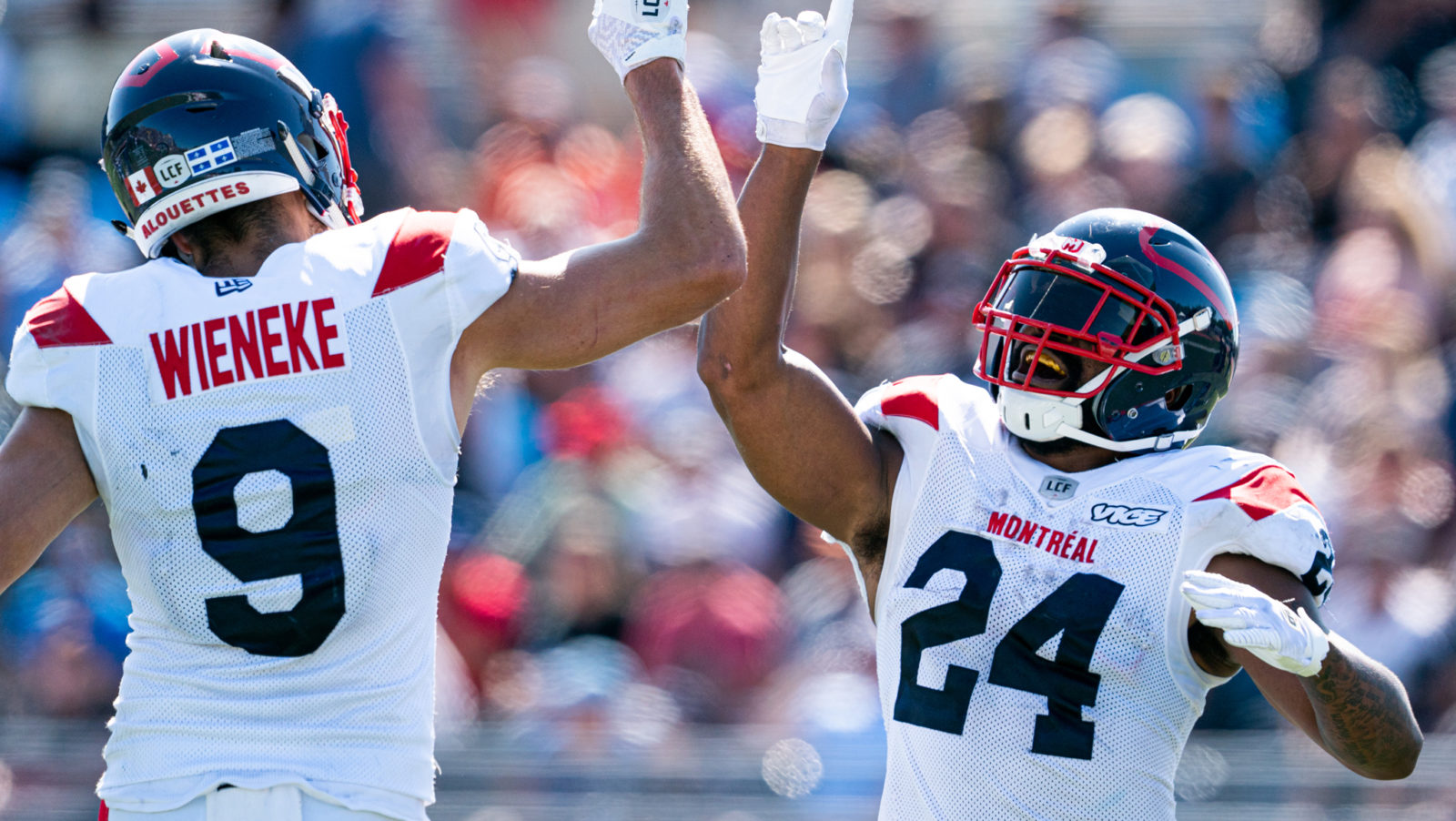 We’re more than halfway through 2019’s 21-week season and all nine teams have finished at least half of their schedule. Sure, it might be a little cliché and lacking originality, but let’s do some midseason awards, seeing as how that’s where we find ourselves. It’s always a good conversation starter, and there are some really good candidates thus far.

This might be the easiest of the bunch, to be perfectly honest. Coming off the best season of his career in 2018, Harris is on pace to set new highs a year later and looks as fresh as he ever has. Now in his tenth CFL season, Harris leads the league in rushing yards at 908; he’s averaging more than 90 yards per game and is clipping at 6.4 yards per carry. Harris has been consistent, dangerous, and explosive all season with no signs that is ending anytime soon.

RELATED
» Rewind: All the best highlights from Week 11
» O’Leary: Jones dips into TD Atlantic history books to get Als on track
» Riders capitalize on turnovers to down REDBLACKS

Harris is unlike any other tailback in the league, in that his team’s offence runs through him. Harris is the league’s most important non-quarterback and the gap to him and the rest of this year’s field is large, at least for now. Mike Reilly has struggled in BC, while Bo Levi Mitchell has only started two games; the pair have combined for the last three MOP awards. While Trevor Harris, Vernon Adams Jr., and Cody Fajardo have all had really nice seasons, Harris has been ahead of the rest on the CFL’s best team.

I was skeptical about the Alouettes coming into 2019, mainly because we were hearing similar refrains. We were hearing things like: this year was going to be different, and this was the year they returned to relevance. It turns out those things were true this time around, and the path they’ve travelled isn’t necessarily the routine one.

Montreal fired their head coach days before the start of the regular season. They really didn’t have a clear-cut winner for the starting quarterback job out of training camp, and the guy that did win was injured in game one. Then, after an 0-2 start, it looked like the Als were in line for another difficult season.

Head coach Khari Jones deserves a ton of credit, though, because he’s done an outstanding job. The aforementioned Adams looks like a viable, long-term starter, which is something Montreal has been craving for years. William Stanback is one of, if not the, most exciting players in the league. And they’ve got a defence that is really rounding into form.

I didn’t see it coming prior to the start of the season and I was even more skeptical after an 0-2 start. In hindsight, I shouldn’t have been, but that’s why we call them surprises, right? 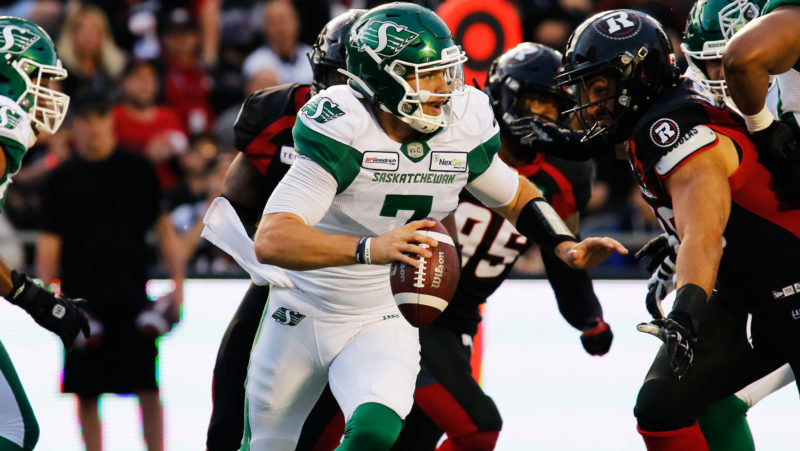 Cody Fajardo has surprised everyone with how well he’s played after taking over the Roughriders offence (Patrick Doyle/CFL.ca)

Boy did the Saskatchewan Roughriders have a lot of questions coming into 2019, but leading the way was the one at quarterback. Who was going to lead the Riders this season in the sport’s most important position? The answer has turned out to be one few would have picked, but Cody Fajardo has been outstanding this season.

Since taking over as Saskatchewan’s starter from Week 2, Fajardo has been one of the league’s most consistent and dynamic quarterbacks. He’s now 6-2 as a starter with the Roughriders and has taken huge strides from when we saw him starting games a few years ago in Toronto. Fajardo is more accurate and has done a great job limiting mistakes without sacrificing the athleticism that makes him dangerous.

That athleticism has been on display throughout the season; he’s averaging a nice tailback-like total of 5.5 when running the ball, something he’s done 57 times this season. When combining combine Fajardo’s average of six carries a game to a consistent workhorse like William Powell, you get a really dangerous rushing attack.

Fajardo has totaled 15 total touchdowns this season, eight through the air and seven on the ground. He’s thrown just four interceptions in eight starts and has one of the league’s best quarterback ratings. Fajardo and Adams were neck and neck for this nod, but it’s been slightly more of a pleasant surprise with the former.

I hate pinpointing a player’s accomplishment and then tying it to age. At the same time, though to see what Saskatchewan’s Hughes and Calgary’s Greenwood have done this season at this stage of their career is truly remarkable. In the former’s case, he’s been terrorizing opposing quarterbacks his entire career. The latter, on the other hand, has had a long and arduous road back to prominence.

Through nine games, Hughes leads the CFL with ten sacks, which is familiar territory for the veteran defensive lineman, now in his 12th season. Hughes has finished with double digit sacks seven of the last eight seasons; the lone exception was a year where injuries limited him to 11 starts. If that’s where he ends up finishing, it’ll be a fourth straight year atop the sacks table for Hughes and a fifth time in his career. 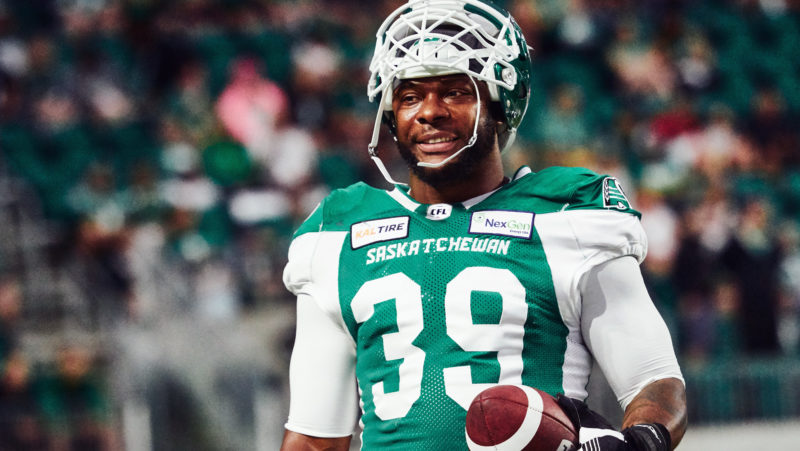 The crazy thing is, at the age of 35, Hughes is still as dominant and explosive as ever. It’s rare in professional football to see defensive ends play at such a high level for a decade plus, which is why cases like Hughes and John Bowman are so noteworthy. Much is the same for a mike linebacker like Greenwood, and when you take into account his road back to full time work, it becomes that much more impressive.

Thanks to a knee injury suffered on the first day of training camp in 2017, Greenwood missed the better part of two seasons as a result. After signing with the Stamps late in 2018, he took over from the departed Alex Singleton and just happens to lead the league in defensive tackles with 69. To do that at the age of 34 is impressive; to do that after missing the better part of 18 months of active duty is truly remarkable.