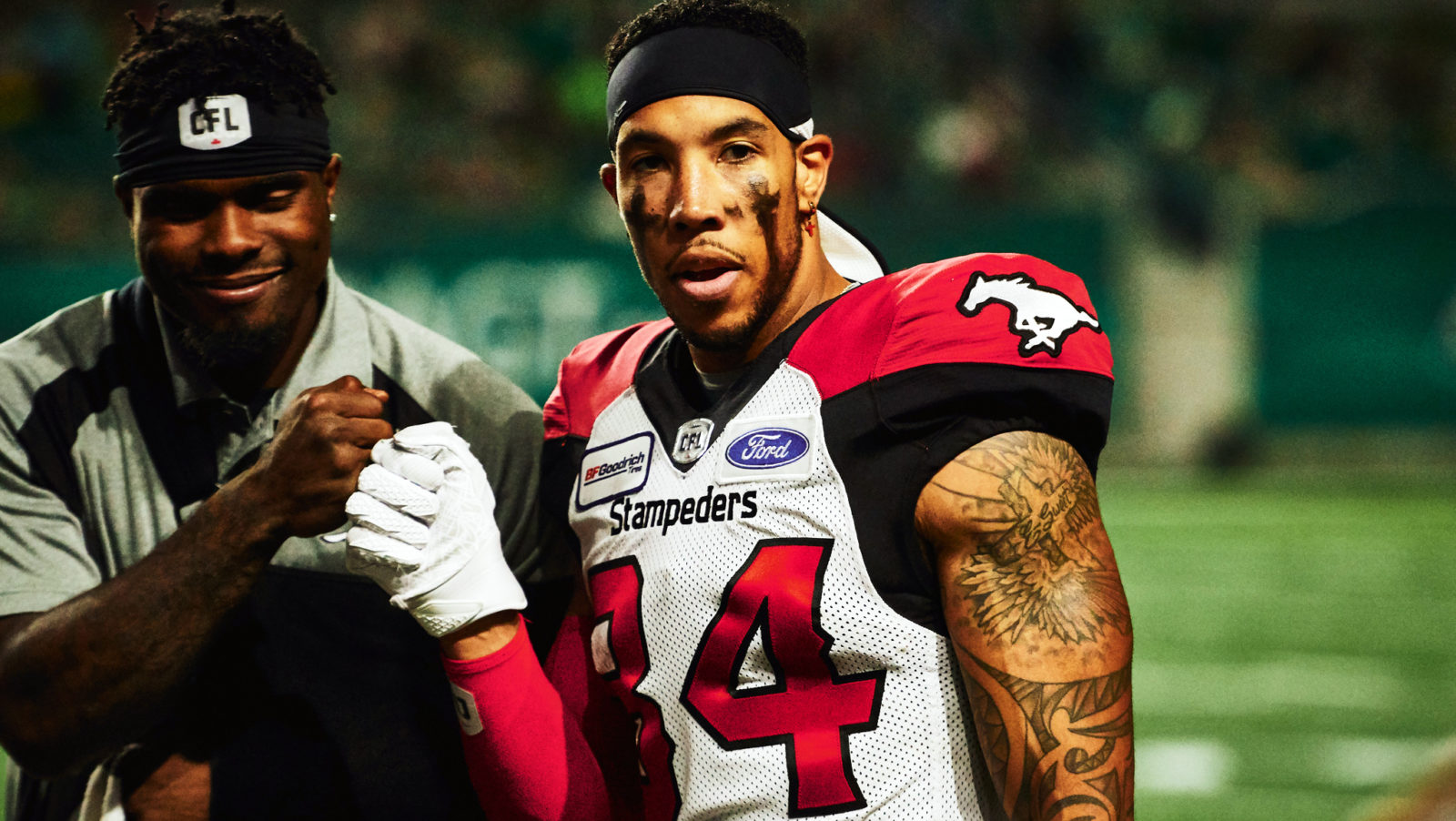 Brandon Banks is not the top receiver in Week 12 of TSN CFL Fantasy Football Presented by LeoVegas. Mind you, this is no fault on him. Speedy B is still a terror that makes defensive coordinators jump up in the middle of the night screaming at a defensive back who fell for a double move from Banks, but his output post-Jeremiah Masoli has been, well, not so good.

Take away Banks’ 34.7 fantasy points in the Week 9 Game of the Year candidate against BC, and his totals over the past four games are alarming. In the three other games outside of BC, Banks has a combined 22.7 fantasy points, or 7.6 FP per game.

At a steep $12,432, playing Banks against an Argonauts defence that has been mauled for a league-high 29 big plays sounds like a winner on the surface, but Ticats pivot Dane Evans ($5,485) has thrown just four majors since replacing Masoli and has yet to record a game of better than 20 fantasy points.

Obviously, the landscape at running back is altered by the suspension of Andrew Harris ($10,740), making the position more challenging in a three-game schedule.

PLAY CFL TSN FANTASY
» Sign up and set your lineup for Week 12!
» The latest from the CFL Fantasy Podcast

Trevor Harris ($12,117) bids for a third straight 400-yard game. Yes, it’s the Stampeders he’s facing, but keep in mind Harris owns three of the five completions of better than 30 yards allowed by the Calgary secondary this season, and he has red-hot DaVaris Daniels ($7,996) looking to show up his former teammates on Labour Day.

It’s time to give McLeod Bethel-Thompson ($9,061) his due as a fantasy workhorse, having thrown for 1,007 yards and seven majors in his last three games. The air raid sirens will be on in Hamilton against a Ticats defence ranked eighth in opponents big plays allowed, including 12 passes of 30+ yards. Cody Fajardo ($7,710) looked solid in Week 11 but is a bit of risk going against a Winnipeg defence that must double down without Andrew Harris controlling the clock on offence. Fajardo has not thrown for multiple majors since Week 6.

Nick Arbuckle ($7,244) had just 9.6 fantasy points from his passing in the first meeting against the Eskimos. Potential users will pin hopes that the Arbuckle who lit the Alouettes for 370 yards and four touchdowns in Week 10 will show up — there’s always the chance of a Bo Levi Mitchell appearance, but it’s 50-50 at best.  It’s put up or shut up time when it comes to Evans as a viable fantasy option. Hamilton’s elite receiving corps is suffering from lack of production, although rookie Jaelon Acklin ($2,989) is becoming a name to watch. Somehow, it wouldn’t be a shock if Chris Streveler ($6,840) rushes for over 100 yards against the Roughriders.

William Powell ($9,363) has at least one rushing major in four of his last five games. Even against Winnipeg’s stingy run defence, Powell should keep his touchdown streak going, especially if the passing game asserts its will early. Don’t be surprised if C.J. Gable ($8,436) gets the bulk of his fantasy points as a receiver. There’s upside if the Eskimos could ever solve their offensive allergies near the goal line. With James Wilder Jr. ($9,312) and his playing time a $64,000 question, Chris Rainey ($5,961) is the best of the Argos’ backs. Rainey’s earned his spot, having racked up consecutive games of at least 200 all-purpose yards. We saw a different Don Jackson ($6,303) in Week 10. Count on the same against the Eskimos.

Anthony Coombs ($3,841) may get the start against the Argos, but it feels like he’s more of a set-up man for closer Cameron Marshall ($5,407), who out-touched Coombs 13-5 last week. Johnny Augustine ($4,500) becomes the latest man up for the Blue Bombers, but don’t sleep on the back with a 6.9 yards per carry average in his brief time. A lot will change if the Argonauts get Wilder back on the field. As lethal as the Toronto passing game has become, it goes into another level if Wilder is lined up next to Bethel-Thompson.

Bralon Addison ($6,077) scored three majors in a Week 2 rout of Toronto. He’s yet to score since. Shaquelle Evans ($6,339) and Kyran Moore ($6,493) will remain the top targets in Saskatchewan, but keep an eye on Naaman Roosevelt ($5,296), who finally scored his first major of the season last week and is due to finally eclipse the 80-yard mark.

It’s tough to choose a top option for Winnipeg. The Roughriders will do all they can to force Streveler to throw north of 25 times, but who’s the best option between Nic Demski ($4,588) and Lucky Whitehead ($3,700)? Perhaps Drew Wolitarsky ($3,653) makes an appearance after catching just four passes in the last three games. Kenny Lawler ($2,500) brims with upside and could be a sneaky option for anyone willing to roll the dice.

Saskatchewan ($5,616) has produced 36 fantasy points in their last two games and will go all-in toward harassing the Winnipeg backfield in a bid for a third straight. That said, the Bombers ($6,094) also have 36 FP the past two games, and with both D’s recording two touchdowns each in that span, chances are strong a Pick- or Scoop-6 will occur.

After recording double-digit fantasy points in five of their first six games, the Stampeders ($5,336) have a combined seven points from their unit in the past three games. Calgary, which allowed more than 30 points just twice last season, have given up at least 30 four times this year.

The Eskimos ($4,424) need a reset of their turnover machine. Edmonton has just three turnovers in their last three games. Hamilton comes off recording a season-high seven sacks against the Lions. They’ll get an Argos O-line that’s allowed 24 sacks. Toronto ($3,200) has scored at least eight points just once from their defence this season.