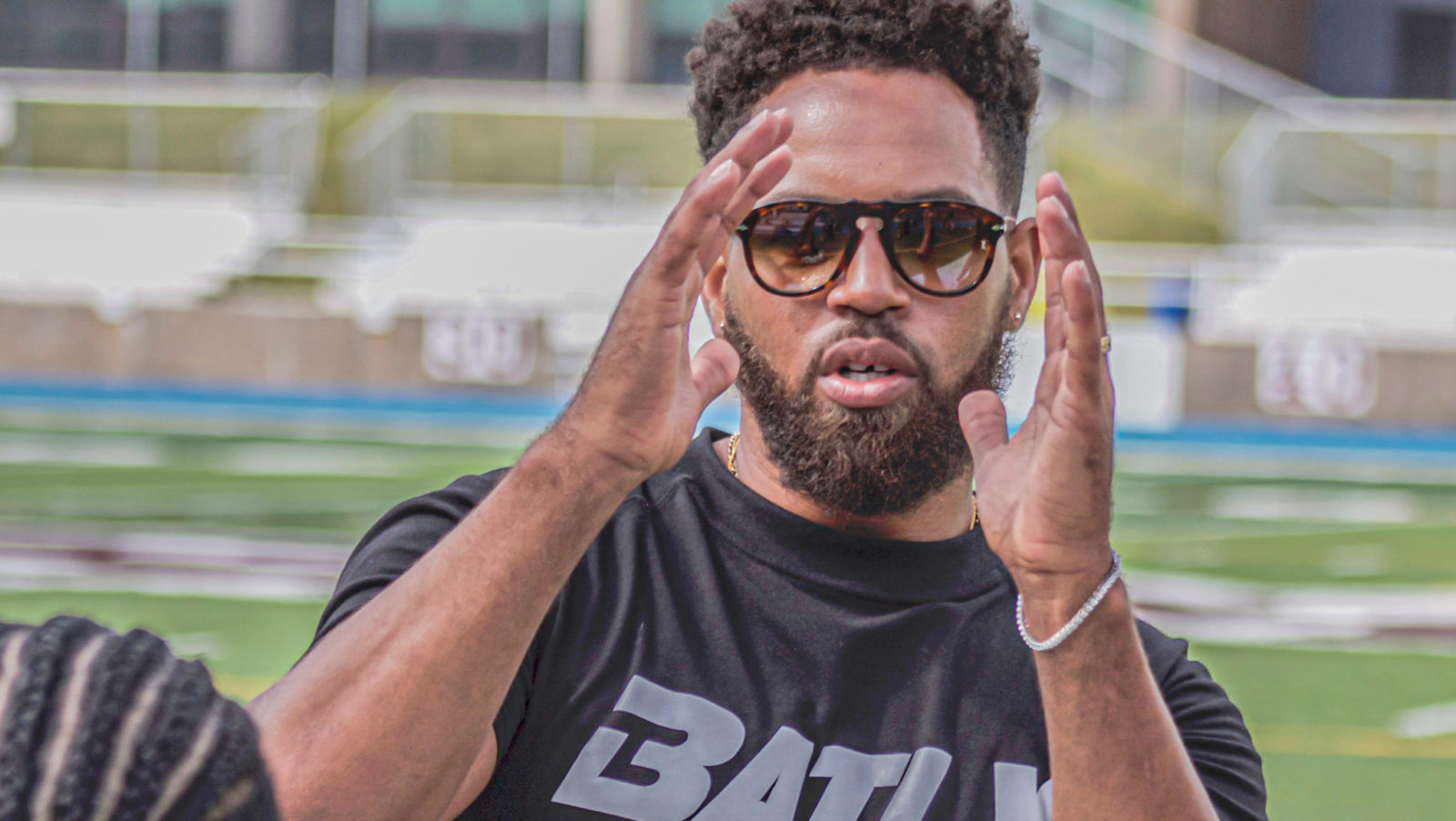 When Micah Brown was growing up in Tampa, Florida, there’s no way he could have known that the football he was throwing to his teammates would double as a passport and shape his life the way that it did.

He played at St. Paul’s College before making his way across the border to play for the Saint Mary’s Huskies, in Halifax. At SMU he met his wife, Kelly, setting up what would eventually be a home base for them after he’d complete a pro career that would take him through multiple countries.

He got his first pro opportunity in the German league in 2008, then had a brief stop with both the Hamilton Tiger-Cats and the Toronto Argonauts in 2009. When that didn’t work out, he went back to Europe. There were stays in Switzerland, Germany, Poland, Finland and Italy. He also put in time with the U.S. national team and played with a pro indoor team in Texas.

He and Kelly got back to Halifax and despite Brown having a master’s and two bachelor degrees, he was struggling to find a job. They laid awake talking about it one night and he decided to follow his passion.

“I told Kelly, ‘You know what, I’m busting my ass trying to find a job that’s going to pay me nothing.’ I told her that I’d rather bet on myself,” he said.

RELATED
» Punt pass kick paving new ways to football
» LeBlanc, Schooners hope to make the most of TD Atlantic
» Thoughts from an unforgettable weekend in Moncton 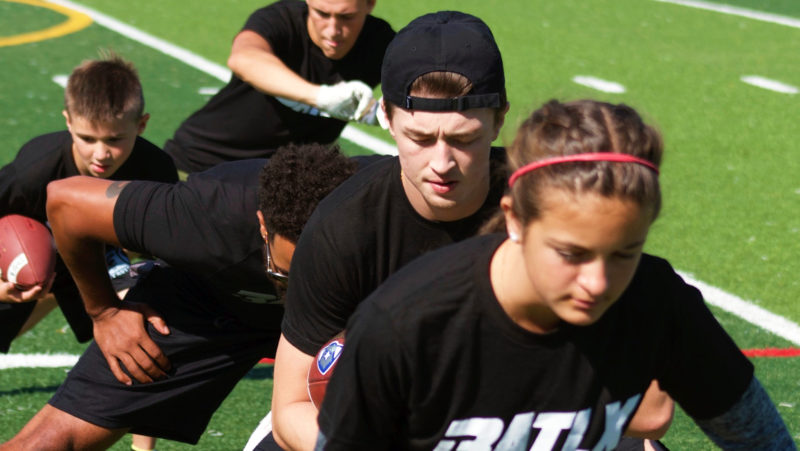 So Brown started training athletes. He started with where he was most comfortable, training quarterbacks, and his client list grew to other positions. Eventually, he and Kelly formed a company, BATLX. As his high-performance training company grew, Brown began to realize that where he was struggling to find an opportunity with football, he could just create it himself. While he’s been an assistant coach at St. Francis Xavier University and is currently an offensive assistant at St. Mary’s, he wanted a team of his own to coach. So he built one. The Halifax Harbour Hawks have now completed their second season, playing in the Maritime Football League.

The Harbour Hawks are a developmental team for players 17 and up.

Using his experience as a well-travelled football player, what Brown is building up two very interesting things. First, he’s getting younger football players the extra practice time outside of their seasons at school that benefited him and the players he grew up around in Florida. That’s leading to an increase in scholarship offers for the kids he’s training, both within Canada and with NCAA schools.

For the athletes he’s coaching and training that are in the midst of university or are postgraduates, they’re having doors opened at the pro level. Gregory Hutchins, a kicker from Bedford N.S. and former Harbour Hawk, recently re-joined the Edmonton Eskimos after attending the team’s training camp in May. The Harbour Hawks have sent two of their players to the German Football League and one to Finland.

It’s coincidental that as Brown’s passion projects have taken off, the CFL has put its focus into the same things, with its #TryFootball campaign and CFL 2.0, where the league has partnered with a number of international football leagues to grow the game. That Brown’s work is all happening in Halifax, where Schooners Sports and Entertainment is continuing to try to establish the CFL’s 10th team brings a number of the CFL’s long-term goals together at once.

We’re seated in a meeting room on the SMU campus, a few days before the Touchdown Atlantic game in Moncton. Micah and Kelly would make the 2.5-hour trip to see the game and Micah would be able to reconnect with a few familiar faces. He grew up playing against S.J. Green and knew James Wilder Jr. in Florida. Kimi Linnainmaa, the Argos’ global wide receiver, was a teammate of his in Helsinki.

There’s a handful of other people in the meeting room with us, most of them SMU players. Jared Melnyk, a first-year linebacker for the Huskies, sits across from two redshirt freshmen quarterbacks, in J.J. Stairs and Dylan Patterson. Lucas Brocklehurst, a soon-to-be senior quarterback at Auburn Drive High School in Coal Harbour is in the room as well, joined by his mother, Natasha Szeto.

All of them have trained under Brown through BATLX and played for the Harbour Hawks.

Melnyk is returning to U SPORTS football after committing to the Carleton Ravens in 2014 but losing his passion for the game, Hutchins was his roommate and got him back into it.

“I thought I was done with football. And then (Hutchins) dragged me over to the Harbour Hawks and it completely restarted it for me,” he said.

“As soon as I started playing again…I realized how much I love it. The two seasons I spent with the Hawks reignited the fire and I just needed to play. And obviously now I have an opportunity to play football while getting an education. So it’s perfect.

“I’m here playing for SMU because of the Harbour Hawks. It wouldn’t have ever crossed my mind to come back to football.”

Stairs and Patterson were both athletes but didn’t have much experience at the quarterback spot. They both joke now that when they started out, they were no good.

“I sucked,” Stairs said, getting a big laugh out of his teammates.

“He came to me and said, ‘I want to be a quarterback and I want to train I want to get better,’’ Brown said of Stairs. “So we put in the work and four years later he had a (scholarship) offer from St. Mary’s and some other schools.” 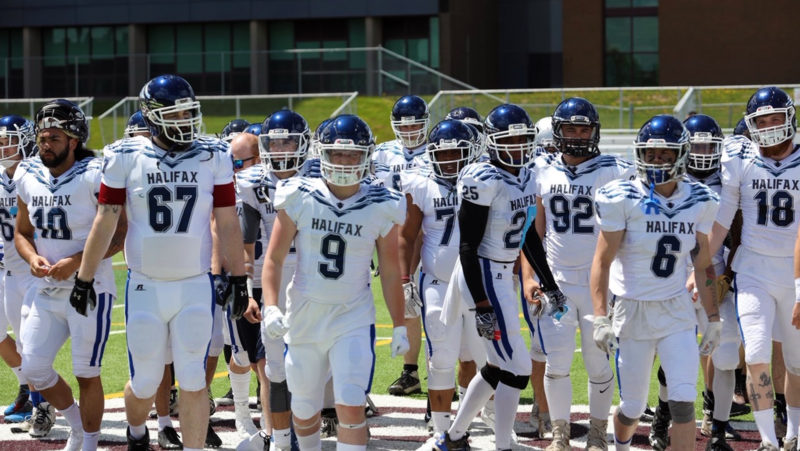 Patterson is the second QB in his family to go to the U SPORTS level. His brother, Duncan, also trained with Brown and plays at Acadia.

“They’re pretty…I can’t even say pretty competitive. They’re at each other’s throats,” Brown said. “And I love it.”

Brocklehurst is an interesting case with the team. At 17, he was too old to play on a provincial team and but not old enough to join an 18-plus men’s league team.

“He would have been out of football for an entire calendar year,” Brown said.

“To be better at football, you have to play football. Where I’m from, in the States, in Florida, we have spring football. In addition to our fall, we summer football, we have camps, we have seven-on-seven tournaments. Football’s year-round for us. Here, you don’t have that luxury because of the weather and some of these rules.”

Brown got approval from Maritime Football League — and from Brocklehurst’s mom, Natasha — to have him join the Harbour Hawks.

“So we were able to help a guy like Lucas come in at 17 years old, with another year of high school (ahead of him) playing with grown men…playing against guys that play or currently play university or played university.”

Brocklehurst said it was intimidating at first, going in as the youngest of the group, but he was accepted and quickly improved going up against bigger, faster players.

“It’s definitely a big jump in terms of the game,” he said. “I was playing against current and former university players, so it’s definitely more of a challenge. And it was definitely a great opportunity to better myself in football and as a person.”

Josh Chrvala is the defensive coordinator for the Harbour Hawks and with Brocklehurst’s Auburn team in Coal Harbour. He grew up in Halifax and played defensive lineman for SMU and Mount Allison. As a coach, he’s found opportunity through Brown’s programs as well.

“I was in a situation from the coaching standpoint this past year where I was with a team that was super established and they did their thing a certain way,” he said.

“When you come in and you try to bring new school thought processes or anything that’s kind of different, or (introduce) anything that they’ve been doing in the States for a couple of years and bringing up here it’s kind of shunned and looked at like, ‘Why? Why are you trying to change what we’re doing?’”

With the Harbour Hawks, Chrvala’s gotten freedom and experience.

The third part of the equation for the growth of football in the Halifax and Maritimes region is the one that only exists in theory right now for the players and coaches in that room. Schooners Sports and Entertainment will make its stadium pitch to Halifax city council this week. If it all comes together, they all agree that the game will be in a position to blossom like it never has out east.

“I think having a CFL team would just encourage more youth to get into the sport early,” Melnyk said. “It would encourage more camps to be around and lead to better development. It would make (Brown’s) job easier to get people into (training gyms) and to just raise awareness of football.

“SMU is the biggest football we have in Halifax. It’s a high level of football but it’s not the CFL. I just think it would encourage a lot more people to get into the sport and bring a lot more attention to the sport around here.”

“(With a CFL team) more people are going to want to come here because it’s like, ‘Oh, they have a CFL team there. I’m going to be exposed to the community of the CFL, the same way I would if I were in Winnipeg or Calgary. It’s all the same at that point.” 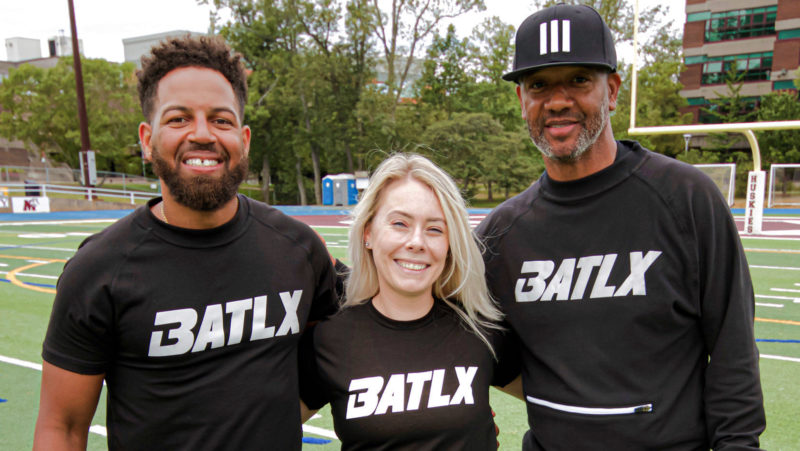 They’re excited about the possibilities that a CFL team could bring, but also open now to a literal world of opportunities that football brings its players. Brown, who says he’s gone through four passports over the last 10 years or so, is the walking, talking proof of that.

“It taught me a lot about myself. I had to really be independent, I had to figure out things on my own. I had to learn to develop social skills,” Brown said of his time in Europe.

“I was lost in Greece. I was lost in France. I don’t speak a lick of French or Greek. Trying to navigate and find your way through. That’ll teach you a whole lot.”

He’s working on taking the Harbour Hawks abroad next season. Plans of a game in Iceland fell through this year, but there’s optimism around going to Germany in April of 2020. The hope would be that given the CFL’s partnership with the GFL, that the game could be played with Canadian rules. It would be the first time Canadian football was played outside of North America.

He’d also like the Harbour Hawks to follow a European club model and be able to take kids through the lower levels of the game and develop them through to a men’s division.

“Our first season we had 21 guys and they had to play all three ways. And we were competitive,” he said.

“So we went from 21 guys in Year 1 to 53 guys in Year 2. Now, the guys that have given word of coming back (next season)…is around 70-plus guys. We’re seeing the growth in football.”