Jim Popp sat next to his latest signing, engaged deep in conversation with him.

Darius Raso looked up at him while the camera shutters clicked, blinked a few times and gave a short answer.

Popp weighed the possibilities. Raso wore a No. 7 jersey. Maybe special agent No. 7? Agent Darius Raso? Without anything concrete nailed down, Popp shrugged.

“Well, you’re our lucky charm,” the GM told him.

There has been no shortage of running back signings in Toronto this year, but none of them are like Raso. 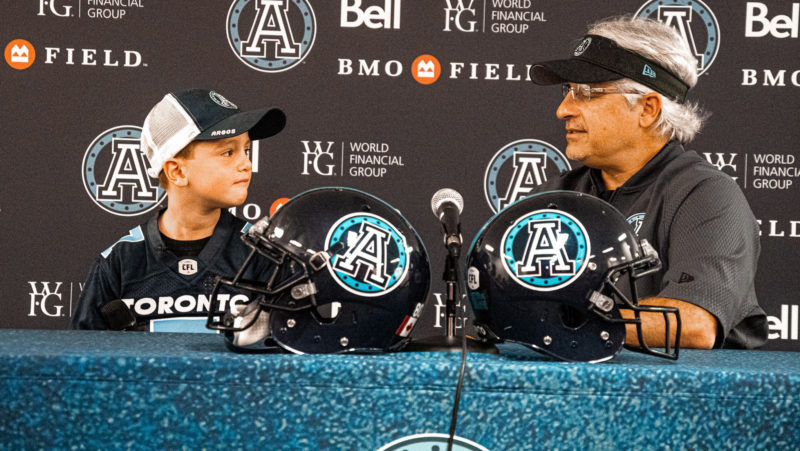 The Argos held a Thursday morning press conference to announce they’d signed the seven-year-old to a one-day contract. Before the pen had met the paper of his contract, he’d already sat in on some meetings and addressed his new teammates.

Raso has been battling acute lymphocytic leukemia for the last year. He undergoes chemotherapy regularly, juggling his treatments with all of the normal day-to-day parts of a seven-year-old’s life, like baseball practice, hanging out with his four-year-old sister Alyssia and his two-year-old brother Marcas and going to Jays and Argos games.

He’s met some big names in Toronto sports over the last year. Mike Babcock spent some time with him, as have some of the Jays players, Darius’ father Marc Ruso said. He’s just getting to know the Argos organization, after first making contact with them on Aug. 1.

Marc brought Darius to BMO Field that night and they held a sign over the railing at field level that said: “Hey Argos, I’m beating cancer so beat the Bombers.”

The winless Argos did just that, stunning the top team in the league with a comeback win. Darius factored into that game. Argos’ staffers saw the sign and had legendary QB Damon Allen come over to meet them. Allen brought Darius down onto the field in the pre-game. Later, Darius would meet another Argos legend, in Michael ‘Pinball’ Clemons.

As the Argos mounted their comeback against the Bombers, injured running back James Wilder Jr. brought Darius onto the sideline to stand with him to watch the conclusion of the game. Wilder is Darius’ favourite player.

“Honestly, it was surreal,” Marc said of that night.

“Meeting Damon Allen and Pinball led to getting picked to do the Tim Horton’s trivia thing (the in-game contest on the big screen) and winning 100 bucks. He treated his brother and sister just (Wednesday) for donuts.

“Then (James) Wilder came and grabbed him and brought him onto the field. After the game, they brought him to the locker room. No one planned this, I didn’t call anyone. It was nice.”

As he explained that night and took in what was happening during the press conference on Thursday morning, the emotion bubbled under Marc’s words. He and his wife Cassandra found out Darius had leukemia on July 4 last year. It was Marc’s birthday. It was a day before Darius’ sixth birthday. Before the diagnosis, doctors were scrambling to figure out what was wrong with him. He couldn’t walk and was in a wheelchair. Marc was about to take a job in Vancouver but had to keep their family in Toronto, where he works in sales, to keep Darius closer to the Sick Kids hospital. Darius is now a year into a three-year treatment.

Hospital days are still tough, Marc said. There’s chemo that goes into the spine, then up to the brain. He’s on a lot of steroids to strengthen his body. But when he’s out of the hospital, they try to get things as normal as possible. He’ll play in his baseball league’s all-star game on Saturday.

“He couldn’t do much last summer. So to see what he’s doing now is nice,” he said.

Like most seven-year-olds in front of an audience, Darius was short on words on Thursday morning. Marc said that he was a little more chatty behind closed doors with the Argos. He told the team that he was there for their first win of the season and that he thought they could beat Hamilton on Mark’s Labour Day Weekend and turn their season around.

Matt Black, the former Argos defensive back and now the team’s player relations advisor and football ops assistant, said that the speech got a huge ovation from the players.