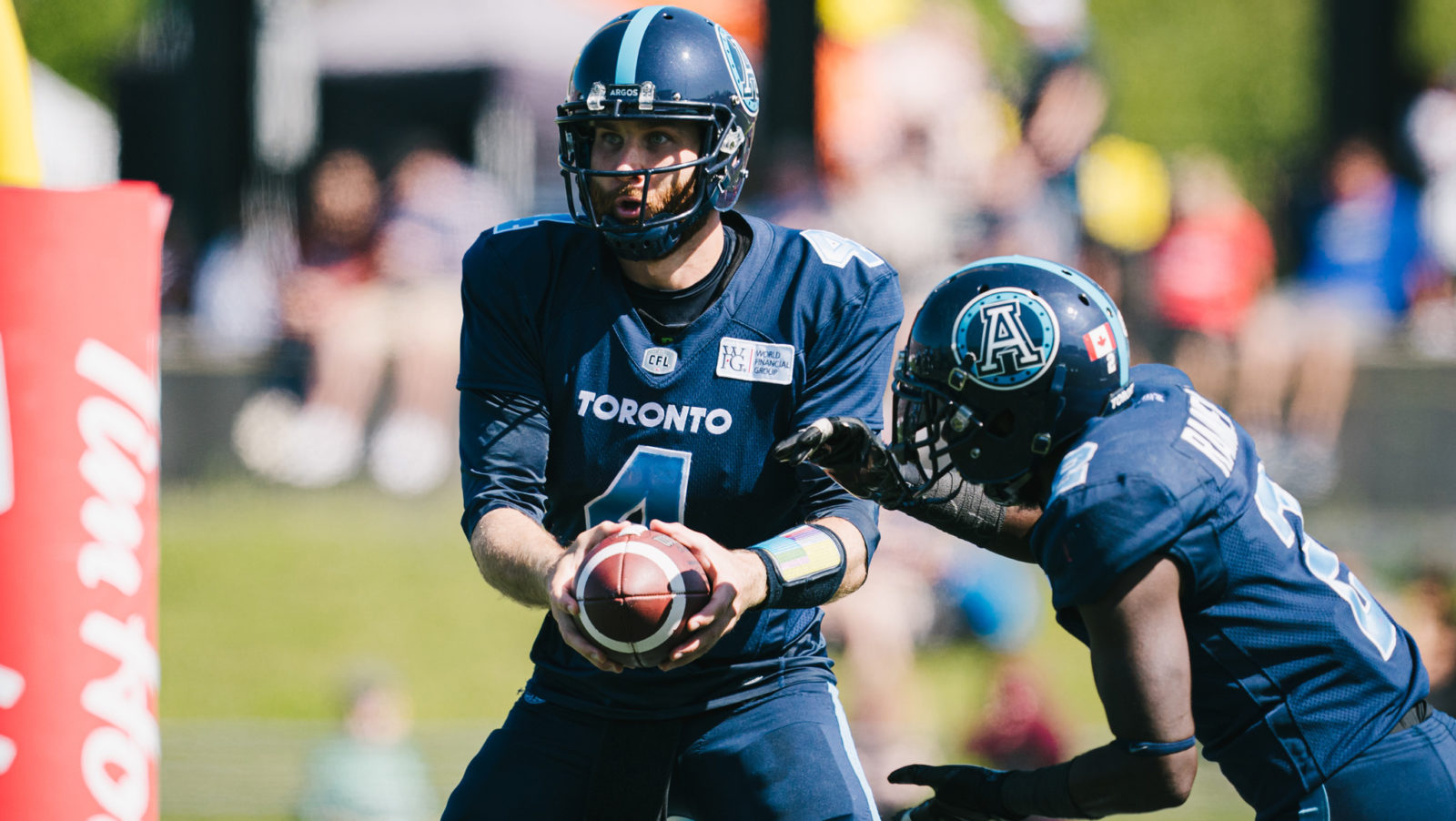 McLeod Bethel-Thompson won’t lie about it. Sunday was a very, very tough loss.

“That one sucked,” the Toronto Argonauts’ quarterback very frankly said after his team got back on the field on Thursday.

“I think we’re still getting over it. It’s going to take this whole week. We’re going to put this work in and it’s going to take more practice and getting back on the football field for us to really get over it because they compound right?”

This Argos season, now standing at 1-8, is one that’s been laced with miscues. Plays that have come down to fractions of inches, or a split second longer needed are common for any team through a season. They just seem to have almost entirely gone against the Argos this year.

The latest came in Sunday’s Touchdown Atlantic game, when Bethel-Thompson marched his team to the three-yard line, down six and had 0.3 seconds to make something happen. His looked to his first read, receiver Armanti Edwards, cutting into the end zone. Ten thousand-plus fans in Moncton held their breath. The ball was knocked out of the receiver’s hands by Montreal defensive back Greg Reid. Game over.

“Now we’re eight-deep and that was probably the hardest one we’ve been through,” Bethel-Thomson said.

“So it’s tough. It’s tough to kind of (pick) yourself up. But we’ve got a great opponent and a great opportunity on Monday. This week, once we get back on the field again, fleshing it out, we’ll be ready to go.”

Lost in the woes of this season is the improved play the Argos have gotten at quarterback. Bethel-Thompson was plagued by turnovers when he took over starting duties from James Franklin in Week 4, throwing eight interceptions in a four-game span. Over his last three games he’s kept a clean sheet while throwing for seven touchdowns and passing for over 1,000 yards in that span. He’s now third in the league in passing, at 2,256 yards.

“I’ve been focussing on protecting the ball and protecting the team. Coach Chamblin always preaches that my biggest job is to protect the team and put them in a position to win and I’ve been trying to do that.

“It’s been growing as a quarterback and as a player each week.”

It would be easy, given the toll that tough losses piling up can take on athletes, for the negativity of the situation to take over. Bethel-Thompson isn’t living in an alternate reality. He knows where his team is and that realistically the window on their playoff hopes is getting tinier and tinier with each loss. But the 31-year-old is staying positive and wants to fight for his team’s season.

“You have two choices, right? I could go in and sulk and (say) poor me, but then I would bring that negative energy on me,” he said.

“The only thing we have in life is a choice. The choice to either choose negative or choose positive. To choose love or to choose hate. Every day I wake up and try to choose love. At the end of the day, I get to play football for a living and that’s all I’ve ever wanted to do.”

He talks about chasing the perfect game. He believes it’s coming and that he’s capable of catching it. He knows that the next game, playing in Hamilton on Mark’s Labour Day, is the biggest regular-season game on the schedule. A sold-out crowd will be waiting at Tim Hortons Field and on it stands a tough defence that Bethel-Thompson can’t wait to take a shot at.

“I love playing against a good defence because it’s the ultimate challenge,” he said.

“They’re playing really good, they’ve held opponents to very little points. I’m excited to go in and run it up and down the field against them.”

A win in enemy territory on Labour Day would go a long way toward erasing the pain he and the Argos felt in Moncton.