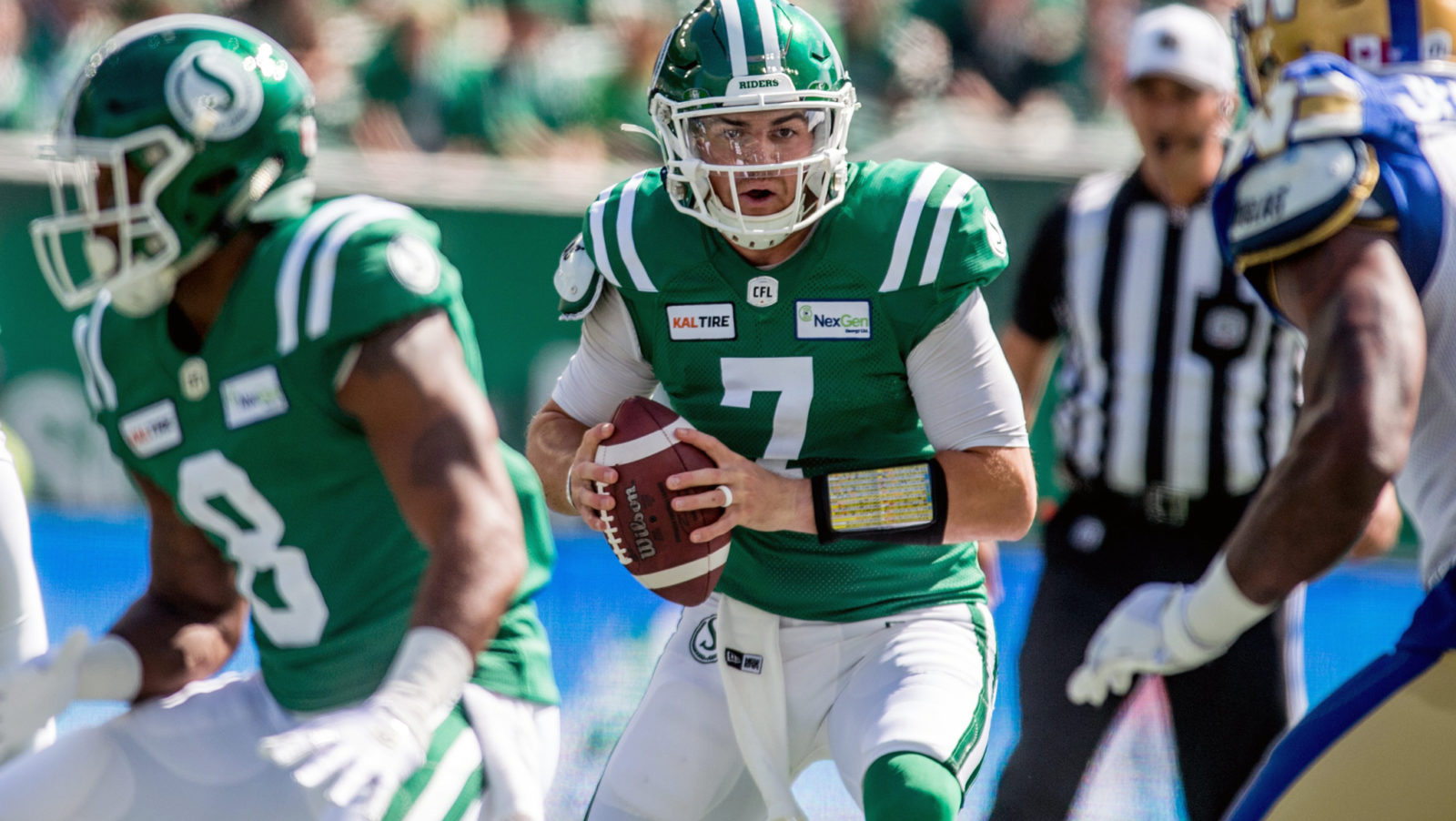 REGINA — Pinned at their own five-yard-line and trailing for the first time, there was plenty of reason to count out the Saskatchewan Roughriders on Sunday in Regina.

But with three minutes remaining, against the top-ranked Winnipeg Blue Bombers, Cody Fajardo passed his biggest test since becoming a starting quarterback earlier this year.

Fajardo led an 11-play, 87-yard drive, capped off by a Brett Lauther field goal on the game’s final play to win the annual Labour Day Classic.

“The huddle was dead silent and everyone was just calm, and I said look, we’ve got a great opportunity here to go down and win the game,” said Fajardo after the win. “The guys just believed and as we started driving, we just felt a sense of calmness. It felt like we were at practice.

“When you can get to that in a high-pressure situation like that, you know you’ve got a pretty special team.”

The Riders and Bombers kicked off Mark’s Labour Day Weekend on Sunday in front of a soldout crowd at Mosaic Stadium, the first of back-to-back games. Saskatchewan led the contest almost from start to finish, until Bombers quarterback Chris Streveler scored on a quarterback sneak on third down with barely three minutes remaining.

On the ensuing drive, pinned at his own five after a holding penalty on the return, Fajardo completed five straight passes, eventually setting up Lauther’s 26-yard field goal with no time on the clock, sealing a hard-fought 19-17 victory for the home side.

“That was so cool for him in his second game back to kick a game winner in the Labour Day Classic,” Fajardo said of Lauther, who had missed time due to injury. “Any time as a quarterback you know you’ve got a kicker that’s nails like him, you just want to get the ball in that area.

“That factored into my head on the last drive,” he added. “I knew offensively we didn’t have to score a touchdown there. We’ve got a great kicker, we just have to get him past midfield, give him a great opportunity and he was going to go win the game for us.”

Fajardo finished with 300 yards on 25-of-39 passing with a touchdown and two interceptions. Shaq Evans scored the Riders’ lone touchdown, while William Powell also figured into the victory with two critical first down runs on the drive.

SAM linebacker Derrick Moncrief had a sack and an interception, while Loucheiz Purifoy also intercepted Streveler in a strong showing for the defence.

For spectators, a last-play, walk off victory is always a thrilling and unexpected outcome. For Jon Ryan, the Riders’ punter and holder on field goals, both he and Lauther had envisioned such a scenario before. After the successful kick, the teammates joined an elated home crowd in the back of the end zone.

“Brett just did his job and all week I’ve been telling him, we’re going to hit the winner in the north end of the field,” said Ryan, “and when we do, we’re running to Pil Country, so we ran straight to Pil Country.

“Every win’s a big win, but this one’s special,” he added, “especially for me being from Regina, growing up and going to Labour Day Classics — it’s definitely going to be a memory I keep with me for a long time.”

Fajardo, meanwhile, ran to meet his father, who was a spectator for the first time at Mosaic Stadium. The 27-year-old, who’s emerging as one of the league’s top up and coming stars, reveled in how far he’s come.

“I was frustrated at times early in my career,” said Fajardo, who started his career with the Argos before spending 2018 with BC. “I’m sitting there as [the third-string quarterback] and a lot of younger guys are getting opportunities before me. But it was God’s timing. To have things shape up for this and six straight wins, having a team I love and respect in that locker-room, it’s really special to be on this team right now.

“That was an incredible game, a game I’ll remember the rest of my life,” he added. “It was frustrating at times, it was a rollercoaster of emotions offensively, the good, the bad, the ugly. I just kept telling the guys, let’s have fun. I felt like my energy could have been a lot better but those guys picked me up.”

The Riders, victors of six straight, move to within two points of first in the division. Some would point out how the home-and-home with the top team in the West comes at a perfect time, with the Bombers missing both Andrew Harris (suspended) and Matt Nichols (six-game injured list).

For now, the Riders hold serve in the two-game series, taking a game many expected them to win. All six of CFL.ca’s writers chose the Green and White, while Saskatchewan has now won 14 of the last 15 games on Labour Day Weekend.

The Riders will certainly cherish the win before focusing on the rematch on Sept. 7 in Winnipeg, a challenge they know won’t be easy.

“Winnipeg’s a really good team,” said Ryan. “It’s always tough to beat a team twice in a row so it’s going to be a really good game again.”

“They were 8-2 for a reason, their defence is really strong,” Fajardo said of the Bombers. “It’s the best defence we’ve played. A win’s a win, I’ll never apologize for a win, we found a way and that locker-room’s really excited right now, we’re fired up.

“That’s what good football teams do, they find ways to win games when you’re not playing your best and that one was special.”