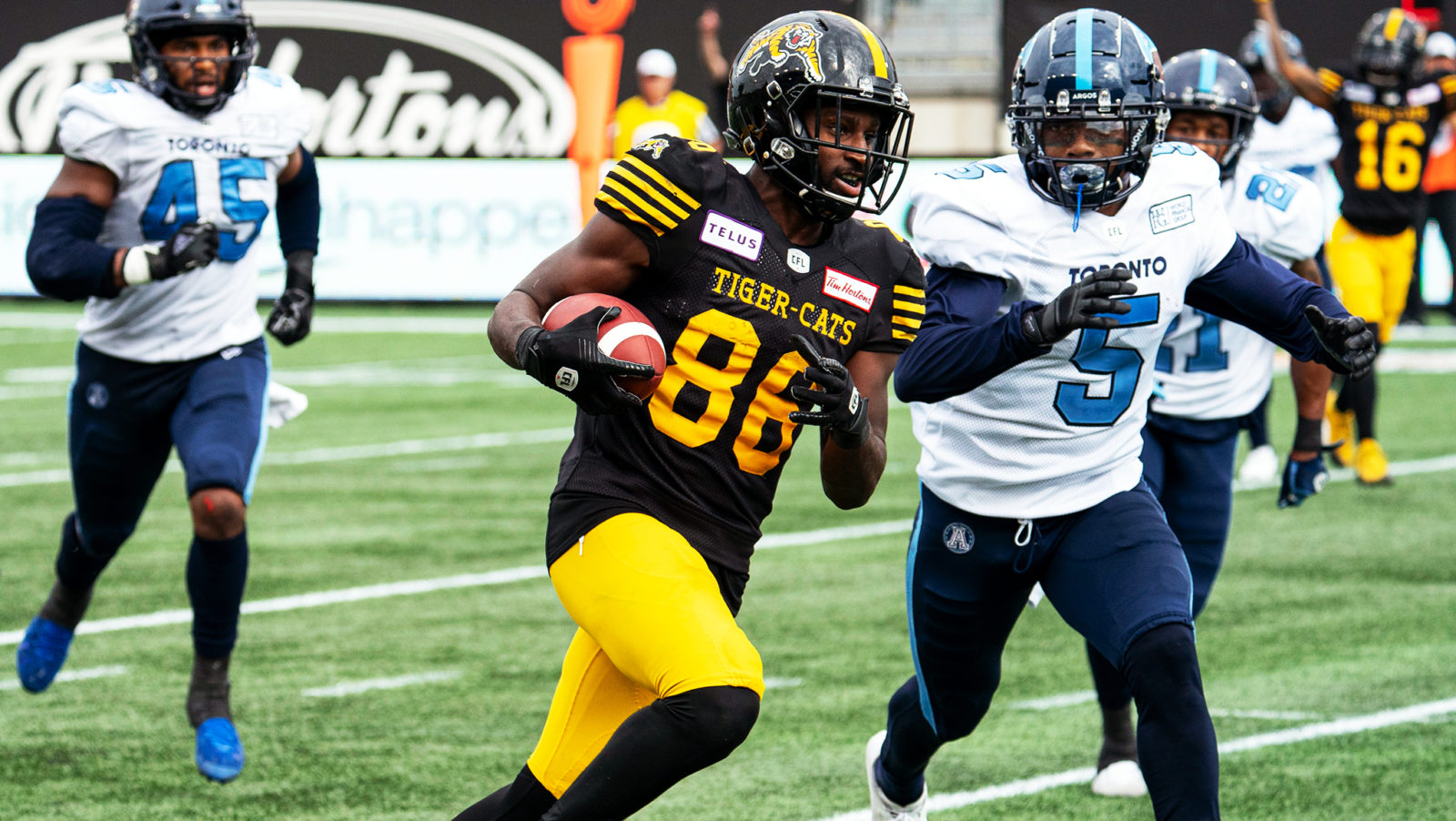 The reminders hang throughout the Hamilton Tiger-Cats’ locker room, a series of yellow practice jerseys along with one red that could serve as nails in their season’s coffin.

There’s defensive end Adrian Tracy; running backs Sean Thomas Erlington, Maleek Irons and Cam Marshall; there’s defensive back Delvin Breaux and another DE in Jamaal Westerman. Then there’s the red jersey, quarterback Jeremiah Masoli. All seven players are on the six-game injured list, most of them out for a season that many had thought could be the end of what stands at an 18-year Grey Cup drought in Hamilton.

The practice jerseys hang in the players’ stalls in their absence, while the active roster goes out on the field and plugs away, doing its part to try to end that drought.

On Monday, after turning a 24-11 halftime deficit into a 38-27 win in the Mark’s Labour Day classic, there were no signs of nails in a coffin. This patchwork version of the Ticats fought its way back for a win and notched the best record in the league, at 9-2.

Simoni Lawrence has played in eight Labour Day games, seven of them with the Ticats. This one was different, he said.

“This is one of the top (Labour Day games) because of our whole philosophy about adversity and how we know adversity is always going to hit us,” he said.

For the first 30 minutes of the game on Monday, adversity flew around the field like it was wearing one of the Argos’ retro helmets. When the Ticats scored on their first drive of the game, McLeod Bethel-Thompson came out and threw a 96-yard bomb to Derel Walker for a tone-setting touchdown. Ticats QB Dane Evans was sacked five times and threw two interceptions, while the Argos looked nothing like a 1-8 team.

Then the fights started. Three skirmishes broke out almost simultaneously, sparked by Lawrence and Argos’ running back James Wilder Jr.’s rumble at the bottom of a scrum. An official came flying out of that mess of humanity and eventually a helmet-less S.J. Green surfaced, enraged at what was happening. When the dust settled and the flags were picked up, the Ticats came out on the short end, losing defensive backs Tunde Adeleke and Frankie Williams to ejections.

“I thought (this year’s game) was awesome. When that little scuffle happened, up until the end result, that was not awesome. I don’t really know how that happens.”

A record-setting crowd of 25,093 fans at Tim Horton’s Field was livid and the Ticats went into halftime down 11.

Ticats head coach Orlondo Steinauer has played and coached in a combined 21 Labour Day games, either with Hamilton or Toronto. He said that the game exceeded what he expected from it emotionally.

“It’s an emotional game and it’s a fun weekend. The crowd was outstanding. It was a great atmosphere,” Steinauer said.

The crowd let its anger go as the third quarter moved along. Evans went from one of his most challenging halves of football to one of his best, making 19 consecutive completions at one point. He started finding his targets. Addison finished with a team-high 11 catches for 167 yards and two touchdowns and Brandon Banks pulled in nine passes for 109 yards.

Jackson Bennett, the team’s fourth option at running back, ran for 77 yards including a 25-yard touchdown at the start of the fourth quarter that let Lirim Hajrullahu’s convert give the team its first lead since 8-0.

“It was one of those games where everybody just kept believing,” said Lawrence, who had a team-high nine tackles.

“We were just a resilient group and we just kept playing football. That’s what we’re about.”

When training camp opened, this wasn’t the team that Ticats fans pictured playing on Labour Day, but they’re finding a way to succeed.

Evans is just 25 and in his second year in the CFL. Monday was just his fifth start. That he was able to shake off a bad half on the biggest regular-season stage of the year and lead the offence back into this game bodes well for him and his team. When they come back from their bye week they go on the road to face Calgary, Edmonton and Winnipeg. The tests will only get bigger and more difficult as the season moves forward.

“You’ve got to keep plugging,” Evans said. “If you go out every game and think you’re not going to throw a pick all season and you want to throw 100 touchdown passes, that’s not going to happen.

“You don’t want to be cocky or anything, but you got to have confidence in yourself. Really, just do what got you here. I was just doing what got me here, why the Ticats wanted to sign me. Just playing football like I was a kid in the backyard.”

This is the first time that the Ticats have ever been 9-2 in a season. There might be as much gone wrong for them in terms of injuries, as has gone right for them on the field. Monday’s game was almost a microcosm of their season. Take some punches, deal with some unexpected player losses, regroup and find a way to win.

“You only get two points for this one. No one’s getting crowned, nobody made the playoffs today,” Steinauer said.

“But to think we’re not going to enjoy it and that I/we are not proud, you’re mistaken.”

“If you had to give this team a label I’d say we were a bunch of fighters and that we’re not going to give up,” Evans said.

“Try not to get ejected doing it though.”