Accuracy Grades: Who was on target in Week 12? 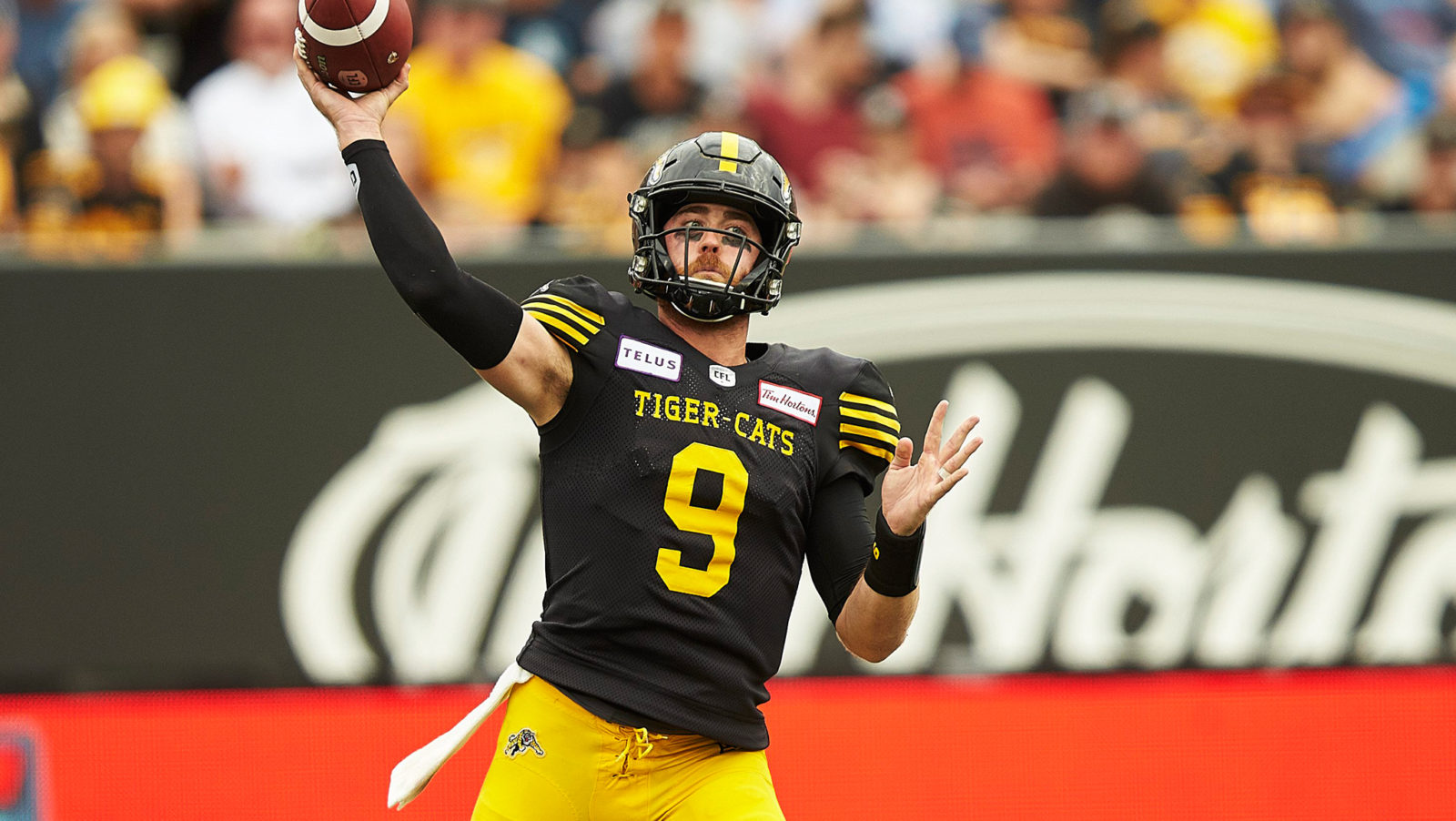 Accuracy Grades: Who was on target in Week 12?

Win lose or draw for your favourite team, the reality is the CFL had packed stadiums, great games and outstanding quarterback performances from the six men tasked with all the pressure of the last summer long weekend.

This week, CFL quarterbacks had the highest collective average of any CFL week in 2019 furthering the argument for how much fun it was to watch the CFL’s best do their thing in a marquee setting. 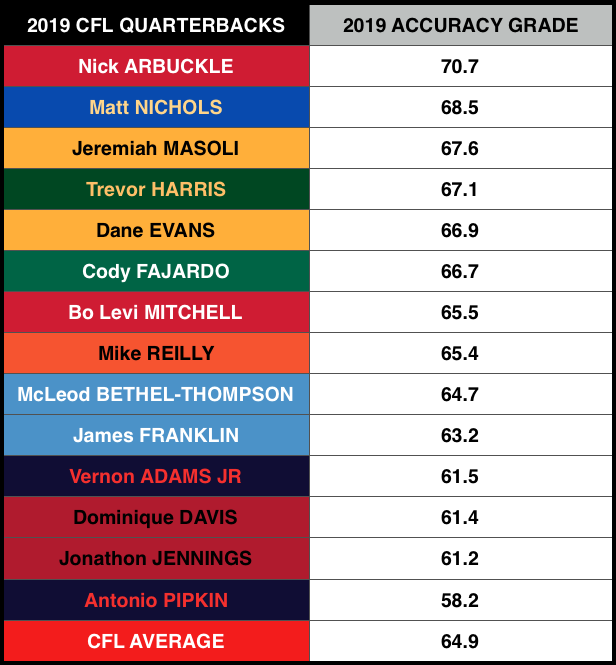 Argonauts quarterback McLeod Bethel-Thompson kicked things off in Hamilton with a thunderous explosion of a stutter-go to Derel Walker for a 96-yard touchdown but faded as the game went on and Hamilton pushed their way back into the ballgame. This resulted in Bethel-Thompson posting the lowest accuracy grade in Week 12, a first for the Argos main man.

Bombers QB Chris Streveler has been criticized for his passing in the last two weeks as – predictably – the Winnipeg offence flows best through quarterback run themed sets. Streveler is 0-7 with an interception so far in 2019 on passes of 25-yards or more in the air and will need to correct that before kicking off the Banjo Bowl this Saturday.

Against Streveler, Cody Fajardo shined yet again posting another weekly accuracy grade above the CFL average score as the Riders gutted out another close win at home. Let’s take a look at the top three for Week 12. 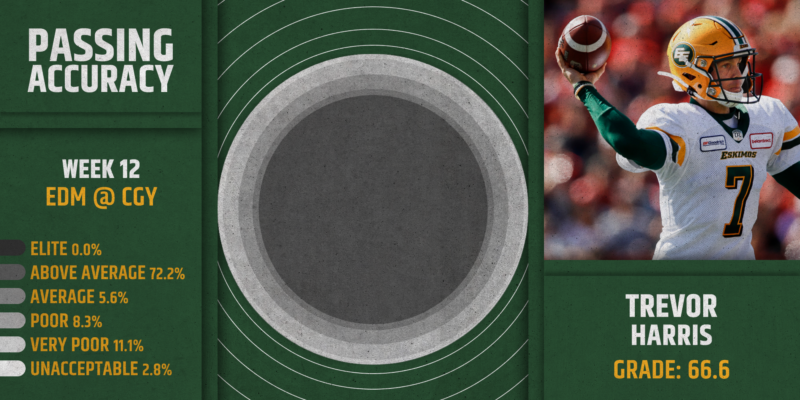 For Harris and the Eskimos, the score zone remains the main issue but Trevor answered the call Monday in his first Labour Day Weekend battle of Alberta to the tune of 27 completions just just eight misses. Had Harris been able to get the ball out in front of Ricky Collins just a bit more on his final throw of the day, Edmonton might have been able to make it an interesting one. 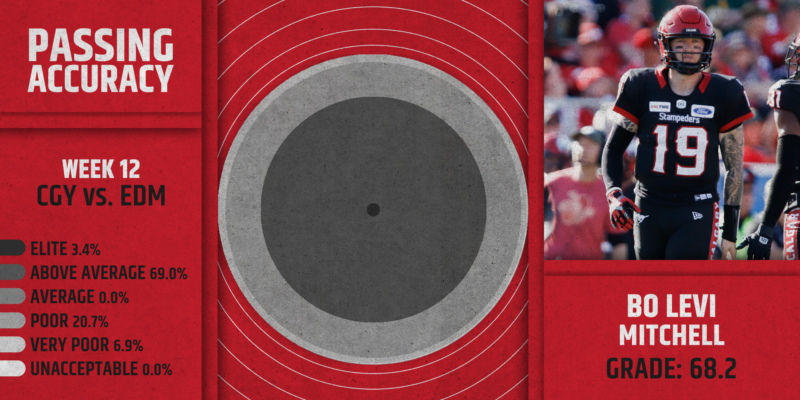 The king has returned. I saw Lion King this week and I’ll be damned if Bo Levi returning from a pectoral injury that derailed the first half of his CFL season didn’t feel like Simba returning to Pride Rock to reclaim the throne from Scar.

Don’t get the reference? Here’s all you really need to know: The guy is damn good at putting the ball where it needs to be and this is just him warming up and getting comfortable in the flow of game speed again.. 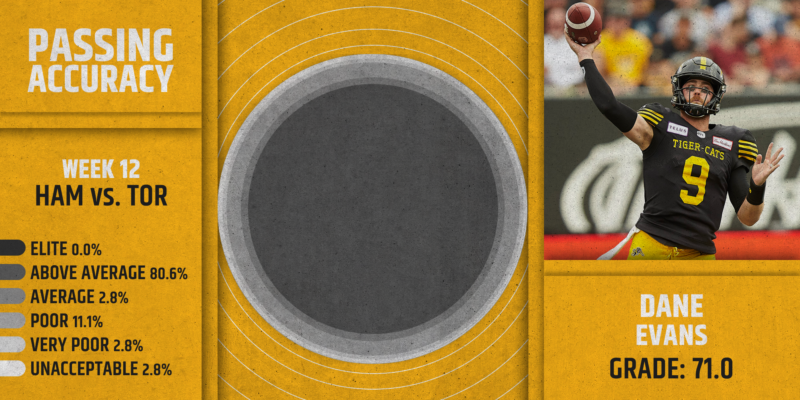 Whoa. 19 of 20 in the second half?! Nobody saw that coming for Dane Evans and the Ticats offence. Albeit for a couple of sprayed shots off target, Evans could have challenged for the single-game 2019 accuracy grade record set by Nick Arbuckle earlier this season, but he’ll have to settle for first place on Labour Day Weekend. 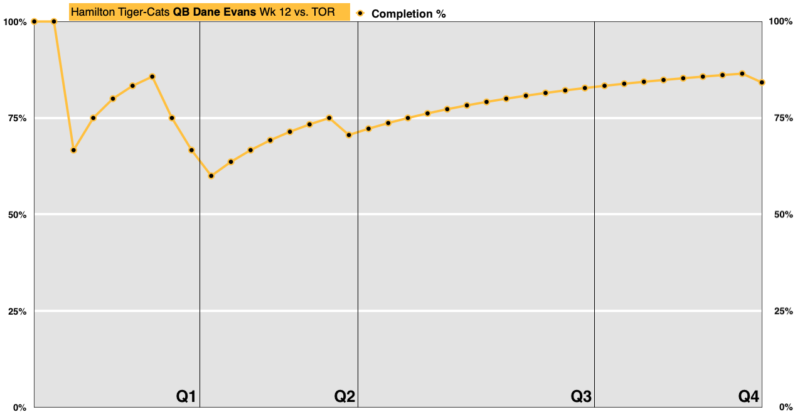 Often the underrated part of tracking the accuracy of CFL QB throws is the underlying question of what they’re being asked to accomplish.

For Evans, as the game progressed his down field passing aggression represented as Yards In Air (YIA) faded thanks to play calling and meeting the needs of each individual situation as the Ticats clawed their way back into the game. At the same time, the offensive skill position players around him started making plays all over the field resulting in a huge boost in Yards After Catch (YAC). 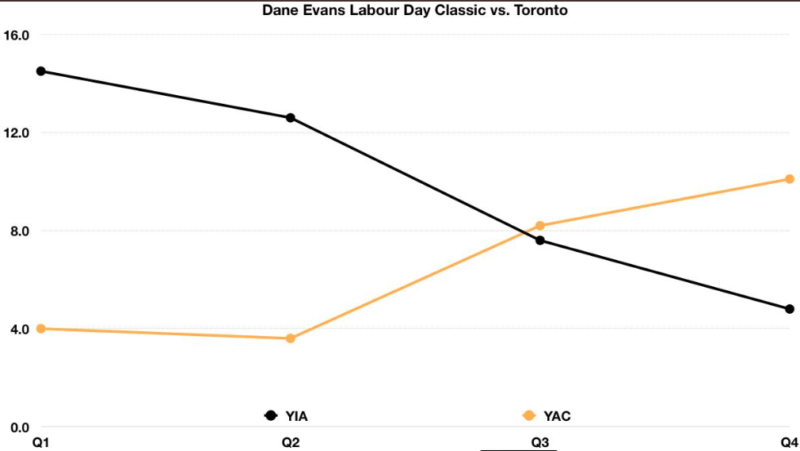 It was a memorable day for Evans brought about by extreme accuracy that was helped through halftime adjustments. All of it lead to the Ticats sixth-straight victory over Toronto in the Labour Day Classic. 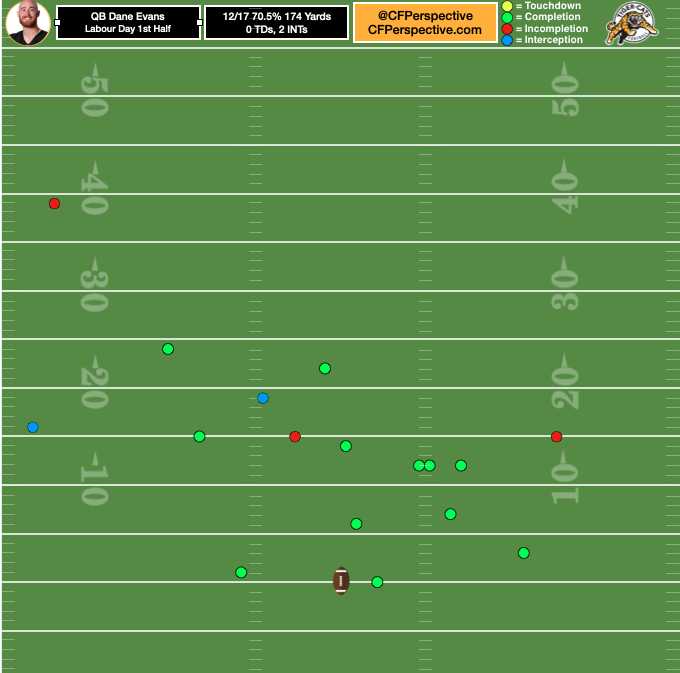 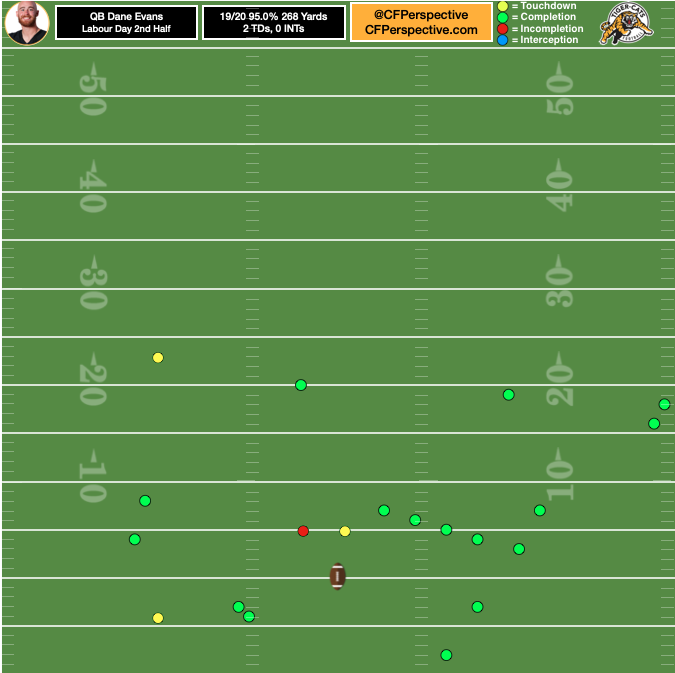 Now a look at the season standings: 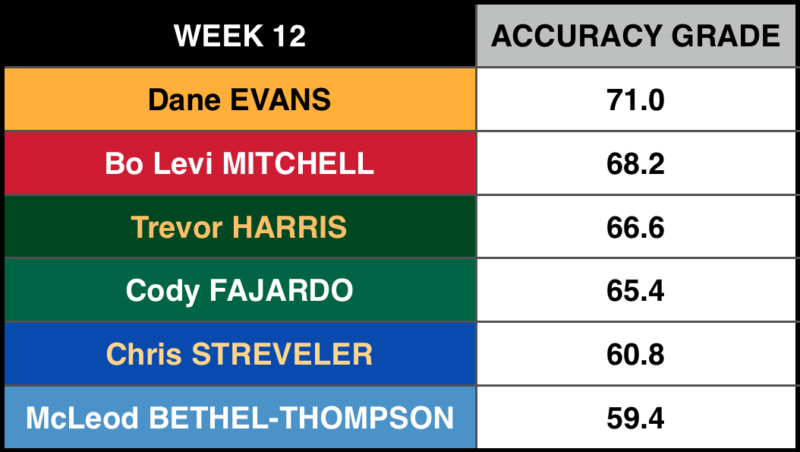 Evans and Mitchell both took leaps forward with many quarterbacks sitting idle as they put on shows for their home fans. With Mitchell jumping ahead of McLeod Bethel-Thompson in his return to game action, the bottom six accuracy grades in 2019 all belong to East Division quarterbacks.

Nick Arbuckle, Matt Nichols and Jeremiah Masoli will be tough to catch with stagnant season marks sitting atop the rest, but if anyone can do it I would imagine Bo Levi will be able to track them down week to week as we head down the stretch.