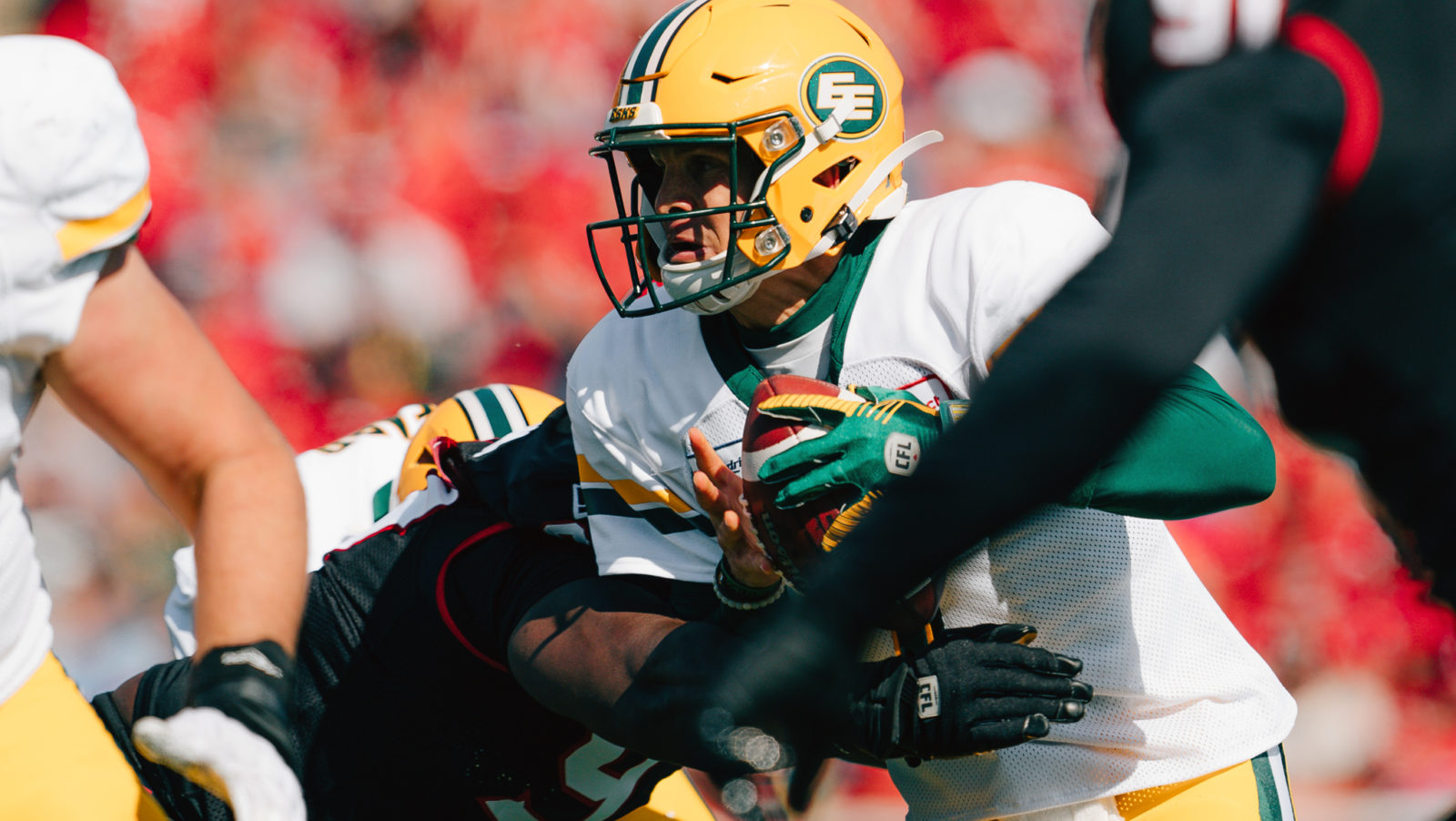 I imagine if most fans people had their choice they would love to see Hamilton and Toronto square off again considering we saw 65 points, nearly 1,000 yards of offence and several player ejections. It was a wildly entertaining game with Derel Walker, Bralon Addison and Brandon Banks making plays all over the field. Sadly there is no sequel to the Labour Day Classic; you’ll have to wait until the final week of the season for the final Battle of QEW.

The good news is one of the most compelling games of the season is coming this Saturday night and it does involve a Labour Day rematch. The Calgary Stampeders and the Edmonton Eskimos will meet up to conclude Week 13 in the CFL and the stakes could not be higher, especially for Edmonton.

I’m not going to bury the lead, this game should mean the world for Trevor Harris. Yes, I know every game is important, and one game does not make a season nor does it define a career, but this is such an important test for Harris and the entire Eskimos’ offence. Let’s start with the quarterback; did you know that Trevor has never beaten the Stampeders? Over his career Harris has a lifetime record of 0-8-2. No matter if he was playing for the Argonauts, the REDBLACKS or now the Eskimos, Trevor has yet to end up with a W taking on John Hufnagel’s monster of a franchise.

READY FOR THE REMATCH

To be fair, there aren’t many quarterbacks with a winning record over the past decade against Calgary, but the goose egg stands out considering how good Harris is. He’s put up some big numbers against the Stamps’ defence. In 2017 he threw for a combined 725 yards with five touchdowns and just one interception and was rewarded with a tie and a loss. He’s also had some stinkers like he did last year, throwing 51 times for just 228 yards and three interceptions in two losses to Calgary.

In 2019 Harris and the Eskimos have lost to both Nick Arbuckle and Bo Levi Mitchell. The Eskimos are in real trouble as they have lost twice in a row for the first time all year, have fallen from second to fifth in the Nissan Titan Power Rankings, and most importantly they are fourth in the West and in danger of going the crossover route come playoff time. Yes, it could be worse, they could be 1-9, but no crossover team has ever made it to the Grey Cup, and the way Edmonton is playing that streak will remain intact.

One of the biggest concerns for Edmonton ironically is the offence. That might sound like an odd statement considering they’re first in offensive yards generated, but so much of that yardage feels like empty calories. You know when you decide to put back a medium pizza after you’ve had a couple drinks and the next morning the only reminder that you consumed that caloric nightmare is an empty box? That scenario is a double whammy as you don’t remember the joy of the late night snack but your waist line sure does and you suddenly have put on five pounds. That’s kind of like the Eskimos’ offence.

Yes, 423 yards a game looks fantastic, especially when you consider that’s more than 50 yards better than the second-best team, the Hamilton Tiger-Cats. But what exactly do they have to show for all that real estate gained? Jason Maas’ team is fifth in offensive points scored and has fewer offensive touchdowns than the Montreal Alouettes, who have played two fewer games! The blame naturally goes to everyone on the offensive unit and the coaching staff, but the first place we look is at quarterback. Just comes with the job.

On a bigger level, the Eskimos’ 6-5 record looks like a paper tiger. Edmonton’s only wins within their own division have come against the 1-9 BC Lions, and their most dominant performances have been at the expense of the 1-9 Argonauts. They have yet to beat Winnipeg or Calgary, and still have two games against the Saskatchewan Roughriders. It is safe to say this version of the Edmonton Eskimos is still looking for a signature win, which brings me back to this Saturday. A win against Calgary could change much of this negative narrative that I have laid out.

Then there are the Calgary Stampeders. I’m guessing I am not the only one who thinks that the return of Bo Levi Mitchell will spurn Calgary onto a monster run to end the season. The counter argument would be that Calgary has to face Winnipeg twice, Saskatchewan and the Tiger-Cats, but the counter to that argument is an easy one: did you see Mitchell last week? Any concerns Stamps fans had about his pectoral injury must have been reduced watching his effortless deep pass to Richard Sindani in the second quarter to set up the Stamps’ first touchdown of the game. Then there was the beautiful touch on his 24-yard touchdown pass to Reggie Begelton to start the fourth quarter and end any chance for an Eskimos win. Mitchell not only beat the blitz on that throw but he wasn’t bothered by a hard charging Vontae Diggs who was bearing down on the Calgary quarterback. An impressive throw considering this was the first live game action for Mitchell since the end of June.

Edmonton was thoroughly outplayed on Labour Day. Their answer to that Begelton touchdown, trailing 25-9, was a two-and-out. In fact, the fourth quarter saw the Eskimos’ offence produce two punts and a turnover on downs. Their vaunted pass rush was held in check and they allowed Calgary to gain 200 yards on the ground. All and all this was a forgettable day for a team trying to prove it once again belongs in the conversation as a legitimate contender in the West. There is still time for the Eskimos to prove they should be taken seriously. A win in their home barn next week would not only exorcise some of the ghosts for Trevor Harris but it would be the kind of victory this group has been striving for. Looking forward to this week’s rematch.