The Weekly Say: Will the Grey Cup favourite please stand up? 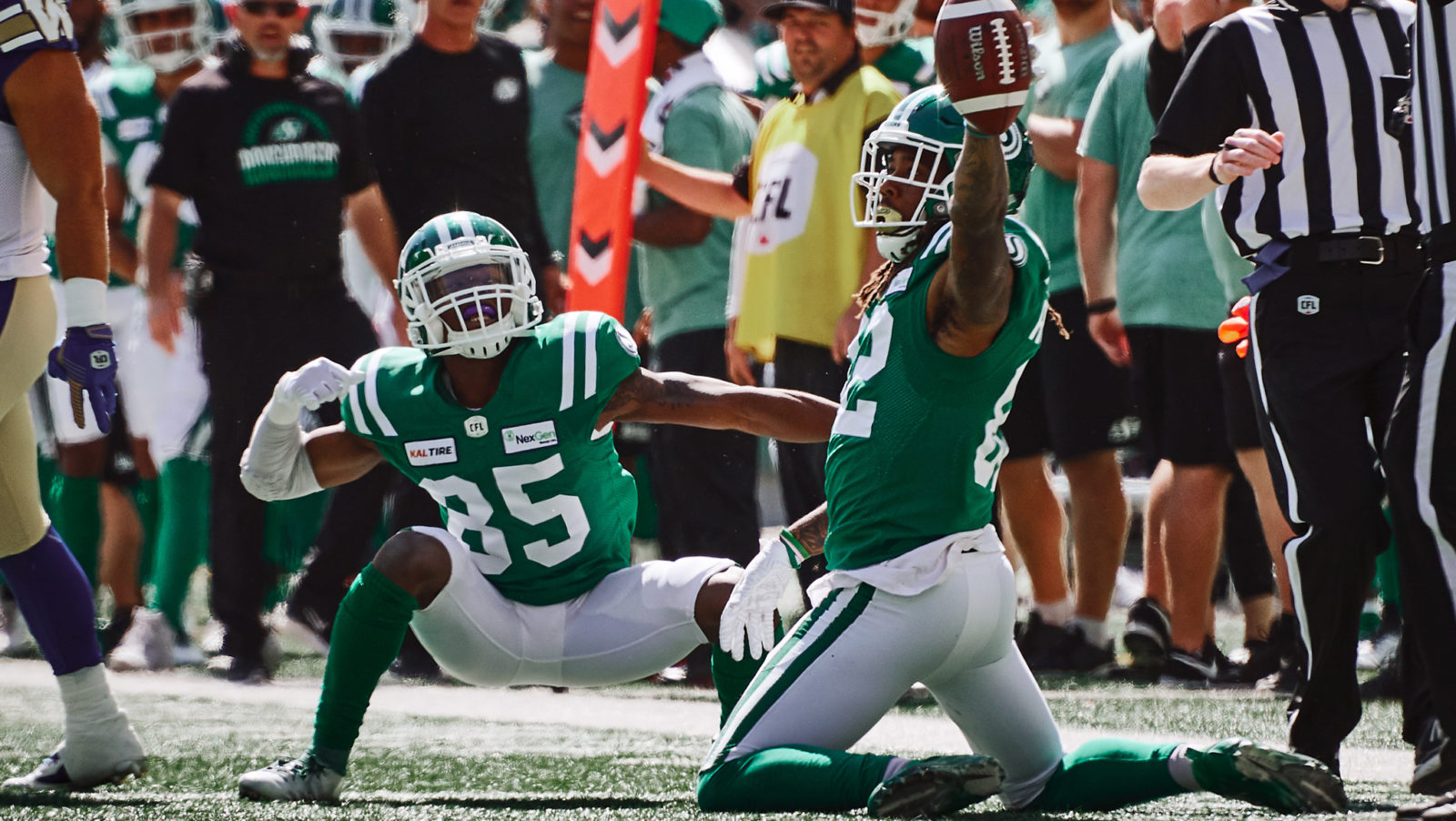 The Weekly Say: Will the Grey Cup favourite please stand up?

While the Riders are on a league-best six-game winning streak, there are plenty of teams worthy of the contender label as the second half of the season gets under way.

The Hamilton Tiger-Cats have the best record in the CFL, including a league-leading point differential of plus-119. In Calgary, the Stampeders are just getting the ball rolling with the return of reigning Most Outstanding Player Bo Levi Mitchell.

The Eskimos, boasting the CFL’s top offence and defence in yards per game, could make a run if they figure out their red zone offence, while the Bombers might have the most complete roster across the entire league under veteran coach Mike O’Shea.

Then there’s the darkhorse Montreal Alouettes, one of the most exciting teams around with Vernon Adams Jr. at quarterback.

Do the Riders deserve to be Grey Cup favourites? The debate is on in The Weekly Say.

The CFL Simulation lists the Riders as the Grey Cup favourite. Do you agree?

Brett Lauther celebrates after his game-winning kick vs. the Bombers on Sunday (Arthur Ward/CFL.ca)

Don Landry: I don’t. But I’d have them right on the heels of Calgary and Winnipeg right now, in lock-step with Hamilton, with the chance to really make me a believer over the next few weeks. A number of weeks ago, “Weekly Say” asked if I thought the Riders were even contenders and I answered “no.” But I added that they could change my mind by the time the Labour Day games rolled around if they performed. Guess what? They have. They deserve to be in the conversation. The stretch will determine whether they deserve to lead that conversation.

Matthew Cauz: I do not. I get why Saskatchewan would get so much computer love but I want to see how they do against Calgary in in Week 18. Last time these teams met the Stamps won by 27 and Bo Levi Mitchell is back and looks healthy.

Jim Morris: As much as it hurts me to say this, no. This year has shown anything is possible, but I don’t think the Riders are as good as their record shows. On their current win streak, two of the victories have been against BC, one over Ottawa, the win in Montreal has an asterisk beside it, and they are now playing a Winnipeg team without their starting quarterback and all-star running back. Saskatchewan still has to prove itself against Calgary and Edmonton.

Donnovan Bennett: No. It’s impossible to evaluate the Stamps because they played the first half of the season without the best player in the league. With Bo Levi Mitchell back the defending champs should be the favourites once again.

Marshall Ferguson: No. While getting the Bombers twice while weakened and having a win against the top team in the East is nice, every game is a one off and I think they are very much beatable

Is the Eskimos’ 6-5 record concerning? 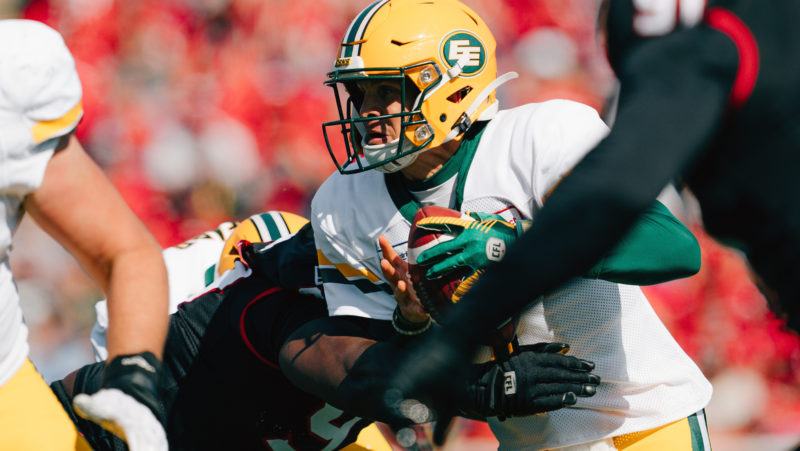 Trevor Harris looks to escape pressure during a loss to the Stampeders on Labour Day (Johany Jutras/CFL.ca)

Ferguson: Yes, they have too much talent to be around .500. This is such a well built roster in my opinion and they should be first in the West right now. To make matters worse their arch nemesis is back healthy down the road and trying to complete a season sweep this weekend.

Morris: Yes, it is concerning. On paper the Eskimos should be a better team than their record shows. The biggest problem Edmonton is facing is an inability to score in the red zone. Kicking field goals won’t win you games when the other team is scoring touchdowns.

Landry: Sure it is. Their six wins include two each over Toronto and BC and one over Ottawa. They’re stuck in a kind of field goal hell and while in no danger of missing the playoffs, they’ll be seen as a bona fide six seed if they limp to a crossover spot and should they continue to play this way.

Cauz: Absolutely. They have yet to register a win against a winning team in the West and while they have piled up a lot of yards it hasn’t translated into touchdowns. Calgary clearly was the better team on Labour Day.

Bennett: Kind of. I think Edmonton’s best chance at getting to the Grey Cup is via the East Division as the crossover team. So, from that standpoint, it’s not the end of the world. What’s concerning is that Trevor Harris has never beaten the Calgary Stampeders. To win the Grey Cup, Harris and Edmonton are going to probably have to beat Calgary at some point and that dynamic is what should worry the Esks the most.

Who should be starting at quarterback for the REDBLACKS? 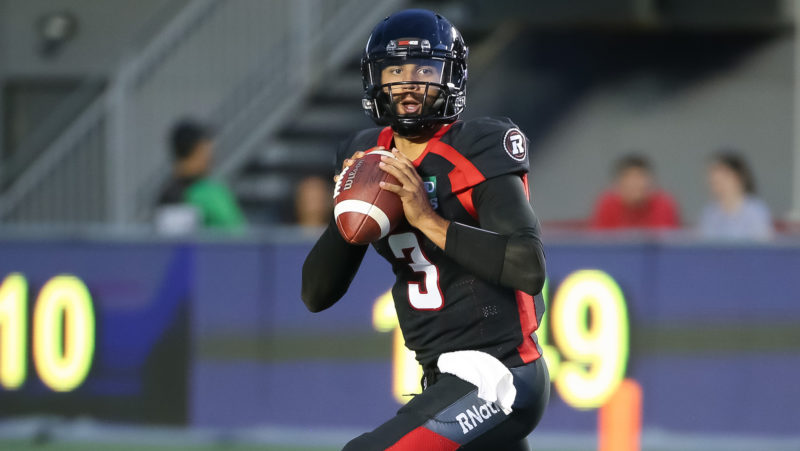 Ferguson: Jonathon Jennings has showed more flashes than Davis the past month. Both have their drawbacks but I say ride the lesser of the two evils right now.

Landry: After using the bye to really try to settle things down, and with time to really rep Jonathon Jennings, I’d give him the start. After all, they brought him in just in case the offence got stuck with Dominique Davis at QB1. It’s stuck.

Bennett: Somebody who is not currently on their roster. Toronto has three QBs and can’t keep them all. Would the Alouettes give up Antonio Pipkin now that they’ve settled on Vernon Adams Jr.? If the season has taught us anything it’s that letting Trevor Harris walk was a mistake and the answers to rectify it aren’t in house.

Morris: Maybe Andrew Luck would want to play in the CFL. What they have is not working.

Fan Poll
Who should be starting at QB for the REDBLACKS?
Jonathon Jennings
Vote
Dominique Davis
Vote
Will Arndt
Vote
Someone Else
Vote
Submit View Poll Results