Landry: Lots to look forward to in second half of ’19 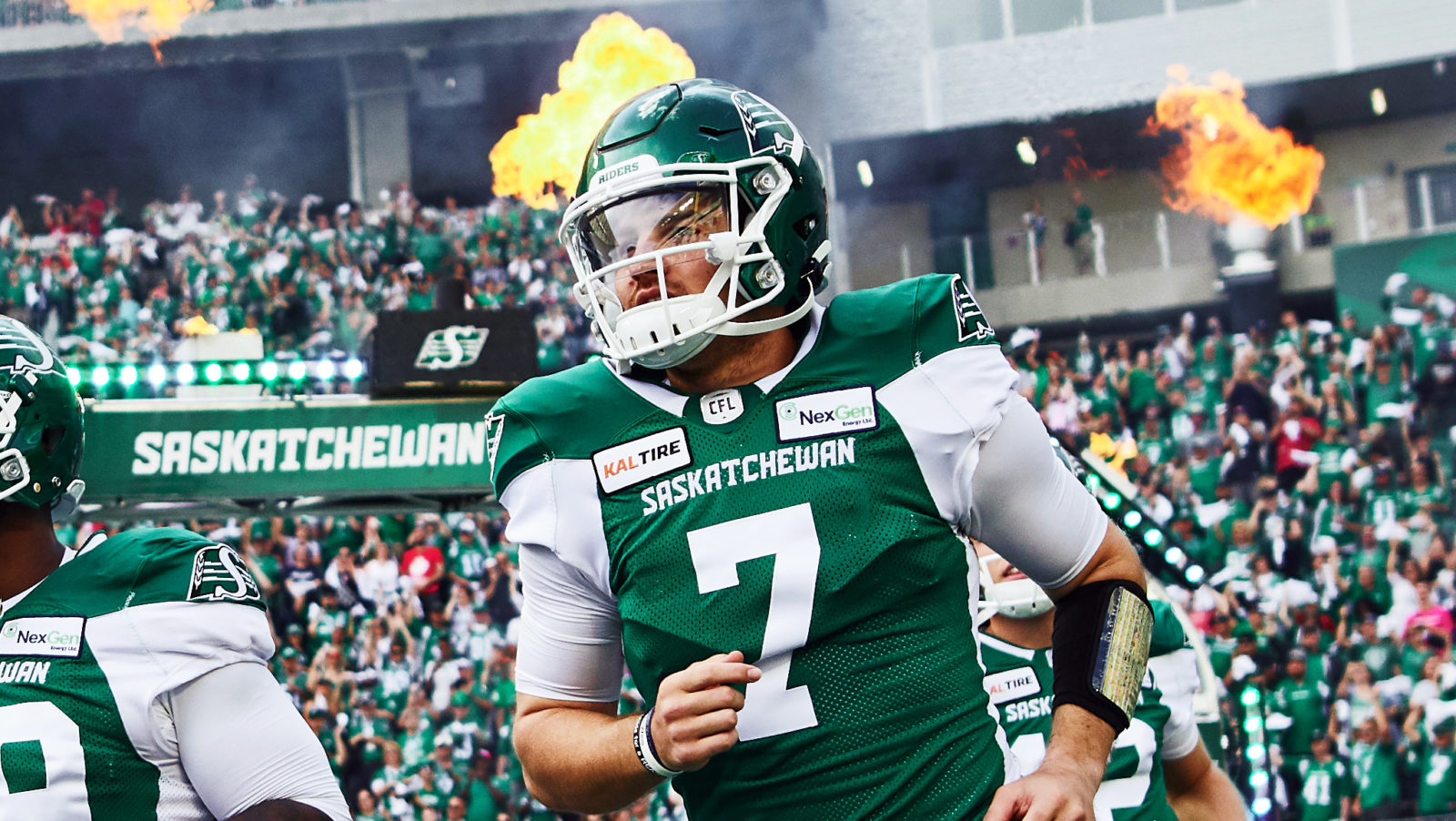 Landry: Lots to look forward to in second half of ’19

Hello, column. I’m not sure what to call you.

On Mondays, I present weekly takeaways, where I look back on things and try to glean some kind of wisdom in the wake of the action that’s taken place in the week just ended. That’s why they’re called takeaways, see?

But what do I call what follows, since these are more like questions for the future, or possibilities that may unfold as this CFL season picks up speed and the contenders trade paint in a mad dash for the line?

What’s the opposite of “takeaways?”

It’s all supposition so I think I’ll make up a new word.

CODY FAJARDO: INTO THE MOP CONVERSATION?

Throughout most of the first half of the season, the MOP conversation in the West has pretty well centred around quarterback Trevor Harris and running back Andrew Harris.

But I wonder: Could Saskatchewan quarterback Cody Fajardo enter the fray?

He sure could. If he’s not knocking on the door, he’s certainly coming up the walk.

While he’s nearly 1,300 passing yards back of Harris, Fajardo is fourth in the CFL in the category and is less than 200 yards back of Toronto’s McLeod Bethel-Thompson for second.

In a Week 8 comeback win over Hamilton, Fajardo showed gritty, MOP-like determination when he capped a late drive with a touchdown run on an ankle that had been injured earlier in the game.

That was impressive, but what was more so, was his late-game drive last Sunday against a dominating Winnipeg defence, going 5-for-5 in passing as he made key, pressure-packed throws to dig out from his own 5-yard line on the way to kicker Brett Lauther connecting on a 26-yard game-winner.

Fajardo and the Roughriders are making loud noises as we head into autumn. If they keep it up and he continues to make key plays at crucial times, he’ll get serious consideration when it comes to MOP voting.

ARE WE ALL DONE WITH THE “YEAR OF THE RETURNER”?

On a record pace for punt and kick return touchdowns earlier this season, the CFL has seen the vice tighten with extreme prejudice in recent weeks; we haven’t had a clean romp to the house since Hamilton’s Frankie Williams jetted for 108-yard major during the last game of Week 9.

*In David Attenborough voice:  “Where once touchdowns came like the unrelenting rains of the Asian monsoons, and returners roamed with the impunity of the Bengal tigers of the Brahmaputra River Basin, a drought now prevails. The returner, far from his former existence as an apex predator, is now gobbled up like so many krill in the unforgiving jaws of the humpback whale.”

Is the party over, or can returners once again make a break for it?

HOW HIGH CAN THESE ALOUETTES FLY? 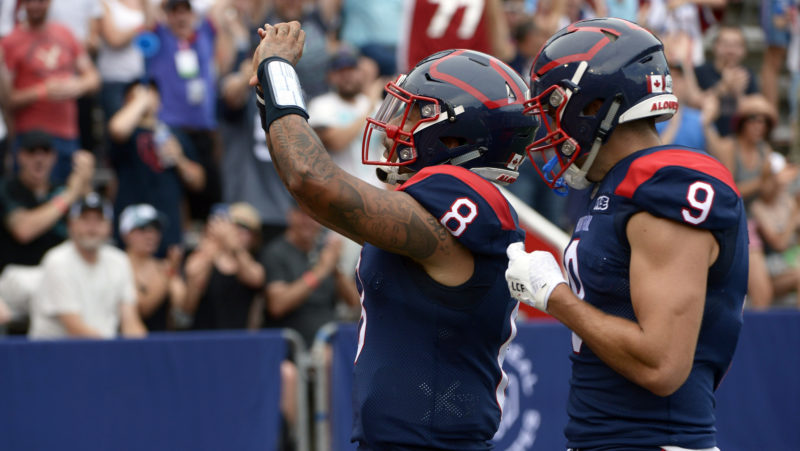 It has been amazing to see this rebirth of the Montreal Alouettes in 2019.

There was calliope music playing at the beginning of the season, as the Als were a blast furnace hot mess, the head coach being fired on the eve of the campaign. And the general manager was shown the door soon after.

But the Alouettes have done more than survive that wreckage, they’ve begun to thrive and you have to wonder if they might not be, by the end of the season, a serious contender to spoil the Hamilton Ticats’ plans of ending a 20-year Grey Cup drought.

They have a first-year defensive coordinator (Bob Slowik) who’s been a rather quick study, blessed with a roster of experienced personnel to run his schemes.

They have a quarterback in Vernon Adams Jr. who is — at long last — emerging as an offensive leader, and after adding veteran game-breaking receiver Chris Matthews this past week, the Als boast a receiving corps that is flat out scary.

With a one-two punch like William Stanback and Jeremiah Johnson in the backfield, and an inspirational head coach to guide them (more on Khari Jones below), this is a team that looks poised to be a difficult proposition to contend with over the next couple of months.

COACH OF THE YEAR? THAT’S SOME KINDA RACE, THAT IS

The Coach of the Year race in 2019 is about as interesting as it has been in recent memory. So who keeps it up over the stretch to become the front runner? Or do we head to the off-season with three candidates that you can make a strong, strong case for?

Hamilton’s Orlondo Steinauer has done an impressive job in Hamilton, keeping the Ticats humming, even through a spate of key injuries, most notably the one to quarterback Jeremiah Masoli. In his first year helming a team, Steinauer has been everything pretty well everyone predicted he’d be. Living up to those expectations would be impressive enough if he’d only had a minor hurdle or two to overcome.

Instead, he’s had many when it comes to injuries to key personnel; one after another after another. And Steinauer has these Cats right at the top anyway.

Saskatchewan’s Craig Dickenson may have had the blessing of lower expectations coming into 2019, but he’s elevated so far beyond those expectations that they’ve been rendered moot. With the late departure of Chris Jones during the off-season, it seemed the job was pretty much defaulted to Dickenson, the belief being that he’d probably not have gotten the position had the Roughriders had a complete off-season to find a replacement for Jones.

Demanding but personable, Dickenson has the full attention of a team that is the hottest in the league right now, and while you might suggest he got lucky with the emergence of quarterback Cody Fajardo, why not give him some credit for guiding his quarterback’s rise?

Montreal’s Khari Jones, long an assistant, never a head coach, got the Alouettes’ job purely by default when Mike Sherman was fired a week before the season opener. While you can argue that Montreal’s fortunes should have taken a bit of an upturn after a very good off-season of adding talented players, it would have been easy to expect more losing from them based on the tumult that engulfed them back in June.

Could Khari Jones be a head coach? That question was a dominant one and it has already been answered with a thunderous “yes,” with his adjustments to his players’ daily routines and his keyed up, spiritual leadership being major reasons why the Als are now, finally, Team Optimism once again.

And by the way, Calgary’s Dave Dickenson has his Stampeders contending again, even with a major off-season roster turnover and the loss of Bo Levi Mitchell for seven games to deal with.

IS DANE EVANS THE MAN? HE SEEMS TO BE. BUT THEN AGAIN…

Shut down by the B.C. defence, stymied by the Toronto defence for almost a full half. Then, an all-world performance to rally the Ticats over the Argonauts on Mark’s Labour Day Weekend, and being named the Shaw Top Performer of the Week.

What’s it gonna be, Dane?

The Hamilton Ticats told everyone who’d listen that they had no reason for major worry after quarterback Jeremiah Masoli went down to a season-ending injury in July. Because Dane Evans could get the job done.

So far, we’ve seen Evans bounce to and from both sides of the scales; ineffective to unstoppable.

The question is, can he find the sweet spot that would have him consistently residing much nearer to the latter than the former? After the bye this week, the Ticats go to Calgary, Edmonton and Winnipeg, all road games against three tough defences.

If Evans keeps grooving through those three — not that you’d expect things to constantly look like the second half did against Toronto — then Ticats fans can probably rest assured that the 25-year-old Texan more than has the right stuff to get the job done in the playoffs; that he IS the right stuff.

Maybe these Ticats could win on defence alone but if Evans is indeed turning out to be more than just an adequate placeholder for Masoli, it’ll be business as usual for all those pre-season predictions that had the Ticats easily mastering the East and trekking to Calgary at the end of November.

BONUS SPECULATEAWAY: Who, or what, can stop defensive lineman Dylan Wynn? Is he on his way to Defensive Player of the Year honours in the East?

THE WEST: IT’S GOING RIGHT DOWN TO THE CUTICLES

Remember that scene in “The Dark Knight,” where The Joker snaps a pool cue, tosses a jagged-edged half on the floor and then orders would-be gang members to take part in “try-outs”?

With four teams believing they can be kings when the regular season ends, and three of them able to make bona fide cases for being the best candidate right now — sorry, Edmonton, you’re in it but you’ve got some proving to do — the race in the West is going to have so many twists, turns and jolts in it, you might think Jordan Peele directed it.

Saskatchewan has all the momentum right now, but you can feel the roll begin to pick up speed in Calgary, too. Winnipeg has the potential to get their mojo back and if they can hang tough until quarterback Matt Nichols returns, they may ultimately secure the perch they now have at the top of the division. Maybe.

The Eskimos, with a defence as good as anyone’s but an offence that’s been travelling across the country only to find that Walley World is closed (I kinda wanted to jam a third movie reference into this), can still be more than a crossover factor, but the time has come to really show it.

With so many head-to-heads remaining, and with very little room for error in games beyond those match-ups, we’re into playoff-type football already. For fans of each of these teams, two months of stomach knots and a steady diet of fingernails are ahead.

THE BOTTOM: WHO’S THE BEST OF THE REST? 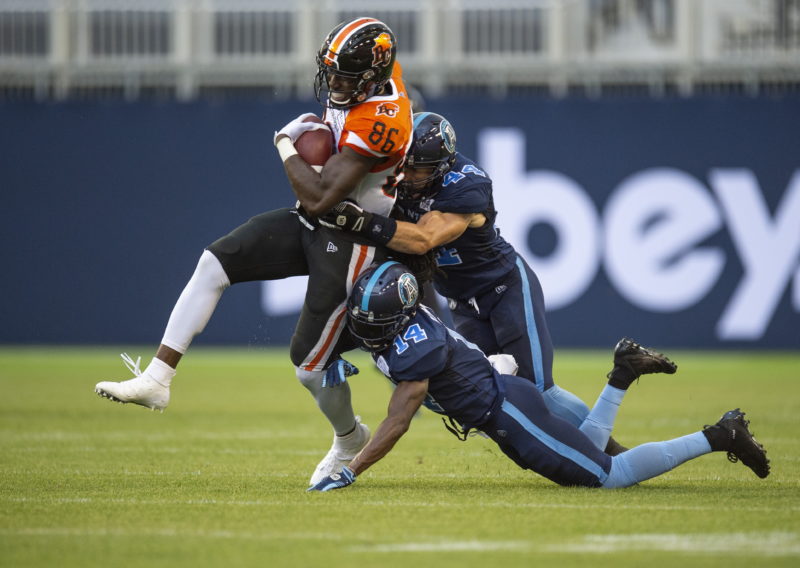 Sure, that might seem like an inconsequential question to those who reside in cities that have teams that are thinking about the post-season, not the next season.

But, it’s intriguing, nonetheless, with the Argos, REDBLACKS and Lions playing for whatever flickering hopes remain, but also for job security and for the very real desire to not be the squad that lays claim to the first overall draft pick in 2020 due to the failures of 2019.

Right now, the Argos look like the best of the three, even if they are technically last based on their single point loss to BC earlier this season. Can they prove it with a few victories, including one over the REDBLACKS this week?

It will also be interesting to see if Ottawa can dig out of its offensive funk with a re-designed offence and Jonathon Jennings at quarterback.

AND FINALLY… I’m not married to “speculateaways.” Open to suggestions.