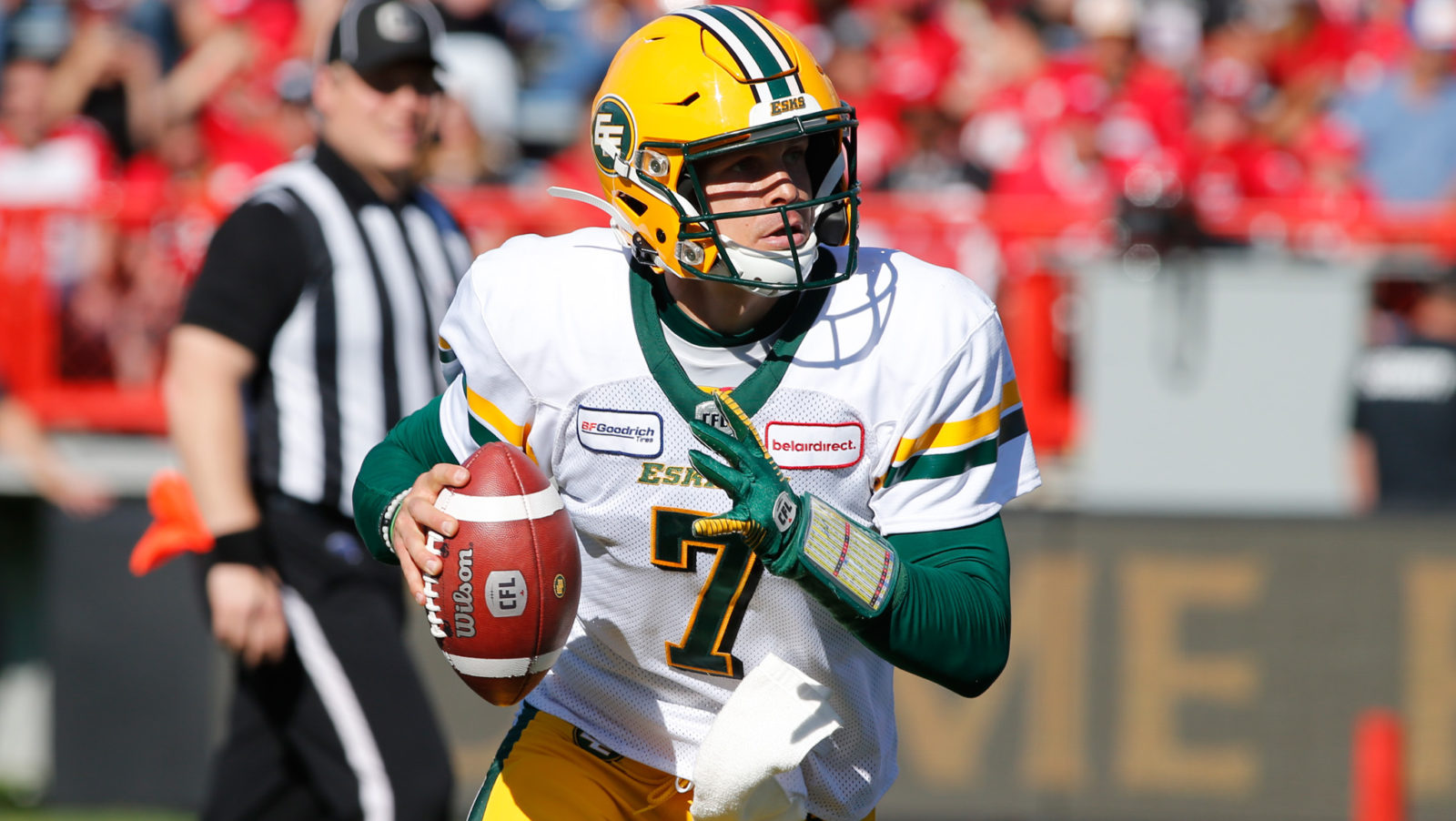 When the Mike Reilly news broke last February, everybody knew Eskimos general manager and head coach Jason Maas had to have a plan. I wouldn’t even call it a backup plan, they just had to know Reilly leaving was a possibility and option B had to be close at hand ready to be activated.

Don Unamba and Larry Dean added to the defence from Hamilton while Sir Vincent Rogers, Greg Ellingson and Trevor Harris all followed Sunderland from Ottawa to Edmonton. Add in DaVaris Daniels from the Grey Cup champion Calgary Stampeders and suddenly the Eskimos went from a team in shambles to arguably one of the more potent and well rounded rosters in the CFL – that is if they could gel in a short period of time we call training camp.

In my assessment, the Esks have come together, their defence especially. The offence has been up and down but continues to post gaudy numbers that seem to follow Jason Maas anywhere he takes his approach.

This season there has been a thorn stuck in the side of Edmonton football fans that the Eskimos need to remove before playoff time: The score zone.

As Rod Black often says on the CFL on TSN, “some call it the red zone, some the green zone.” I don’t care if you call it the mothers maiden name zone or the name of your first pet zone, all that matters inside the final thirty yards outside your opponents goal line is that you score.

Before we get to the breakdown, let’s first clear the air on the score zone.

It’s important, especially inside the ten yard line and even more so at the edge of the goal line, but there are numerous ways to score the football and a big play offence or a perfect touchdown shot that comes from the 31-yard line or from the shadow of your own goal line is equally valuable when the clock strikes zeroes.

It all determines winners and losers, but for a team with the names mentioned above it is befuddling to see the 2019 Eskimos struggling close to pay dirt.

That’s where we begin, attempting to answer the question of ‘is this a real problem or just something that has snowballed into a story of its own ignoring the cold hard facts?’

In the CFL.ca base stats you can see that Edmonton sits eighth in a nine team league in turning score zone opportunities into touchdowns – 14 of 32 for a lowly 44%. That’s the starting point though, not the conclusion.

Why? What is causing this? And most importantly for Edmonton fans hoping for a deep playoff run in a wide open West division, can it be corrected over the next two months?

I believe the first step is getting more reps in the score zone, something Edmonton hasn’t done much of this season – again to be fair, at times this is because of their effective offence from distance. 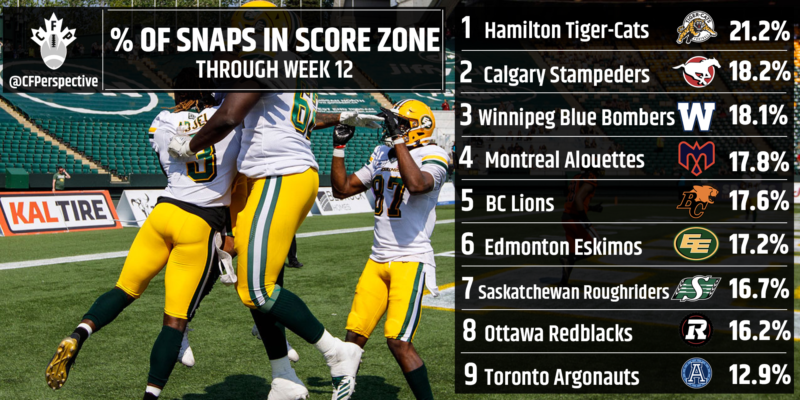 The only way to truly get comfortable in certain situations is live bullets and figuring out what your best plays are on each down, distance and field position. Plays that Trevor Harris and the offensive skill position players know are built to finish the drives, they so often start deep in their own end and drive the length of the field on.

Next is building plays designed for your most effective score zone talent. It requires a different skill set than the rest of the field.

Separation, timing with the quarterback and operating in small windows all come into play. Here is the Eskimos running backs and receivers through Week 12, looking at usage rate and success in the score zone. 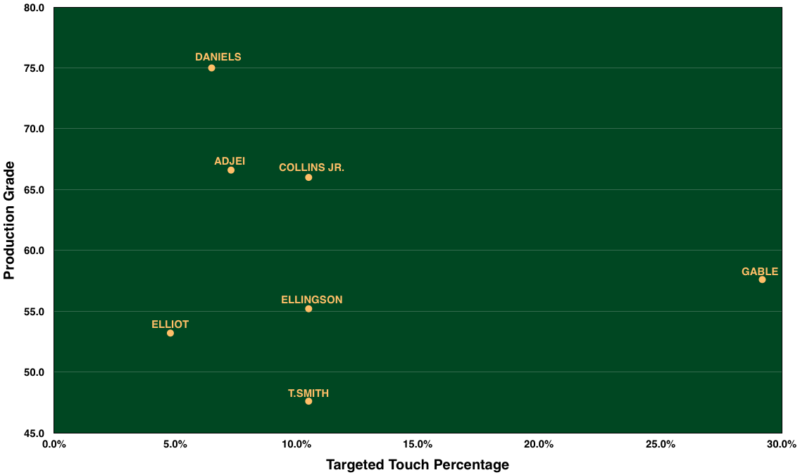 To their credit, the Esks are incredibly balanced in score zone touch dispersal but they have to get DaVaris Daniels more looks as he far out stretches his teammates in score zone production when targeted this season. That’s easier said than done with defences understanding how dangerous Daniels is near the end zone.

To get Daniels more looks the Esks will have to be more aggressive with their play calling in the score zone as they rank below the CFL average for pass play calls inside their opponents 30-yard line.

When Trevor Harris has taken to the sky with his green and gold teammates, it’s been nothing short of feast or famine. On passes of 15 yards or more in the air, Harris is 7/21 this season for six touchdowns. 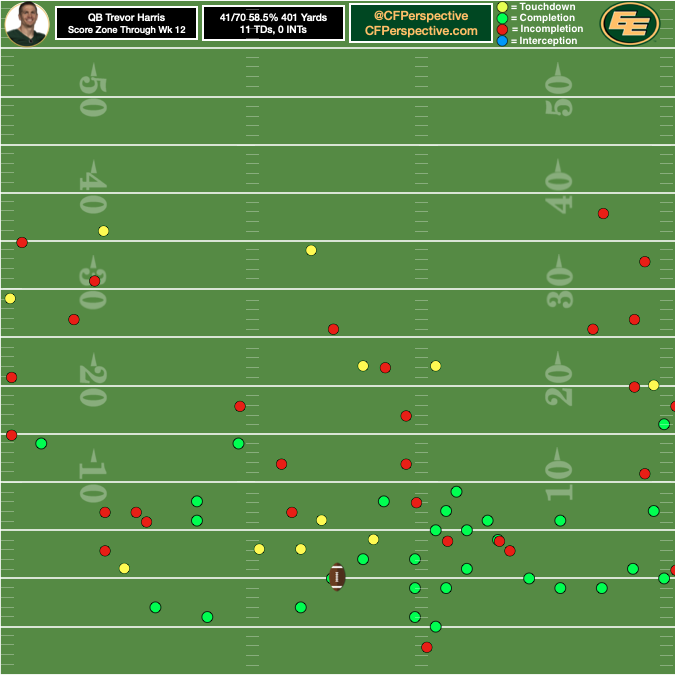 To his credit Harris is yet to throw a score zone interception, which would make any coach happy, but what can’t make Maas happy is the Eskimos surprising inability to stay ahead of the pack on first down yards gained in the score zone.

1st Down Yards Per Play in Score Zone

While the difference isn’t massive, over time it does require more from the quarterback to convert on second and long-er. Much of the social media blame has landed squarely on the shoulders of Trevor Harris as fans believe the score zone issues followed him from Ottawa and the reality is there might be some truth to that. 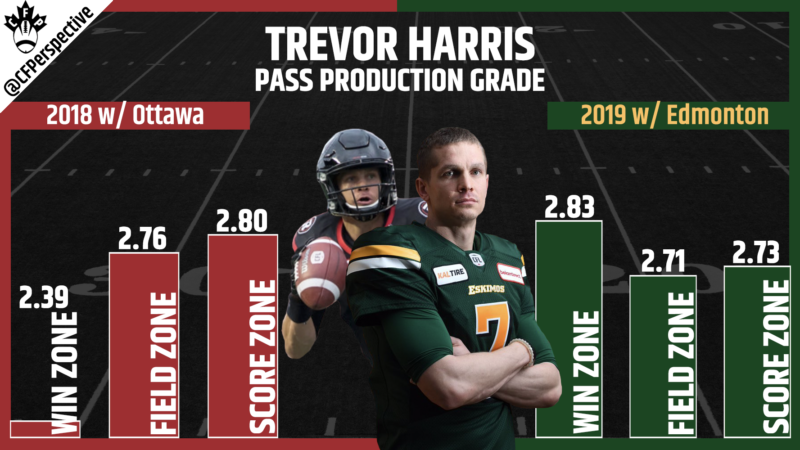 Harris’ production and accuracy grades have dropped slightly in Edmonton, especially close to the goal line but the challenge the Eskimos face in their score zone conundrum is about far more than one man. It’s about a group executing to efficiently score points.

Here’s one last look at the season so far, this time score zone efficiency as judged by points per score zone snap which sees the Eskimos once again near the basement with the West Divisions two top teams in the penthouse. 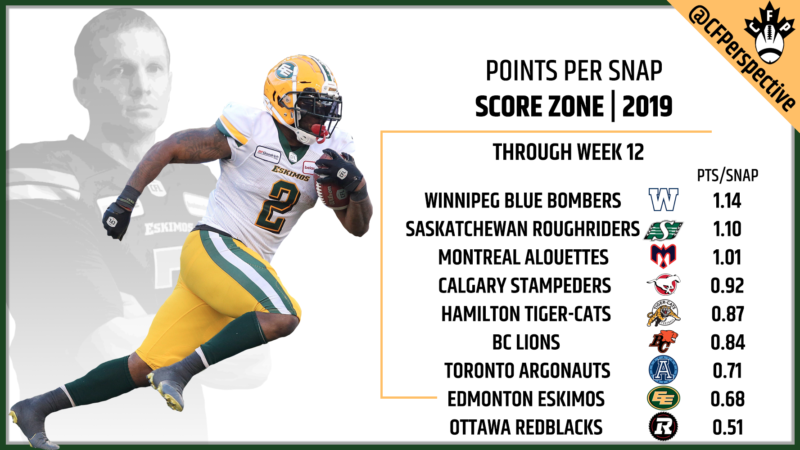 For the Eskimos, all the numbers and comparisons in the world won’t solve their score zone struggles. What it will take, especially this weekend against a suddenly lively Calgary Stampeders squad, is down-to-down execution and a top notch game plan after seeing what the Stamps threw at them when backed up in the Mark’s Labour Day Weekend Classic.

In the team’s first meeting back in Week 8, Edmonton had just three score zone snaps and left with surprising efficiency scoring a touchdown on one of them.

In their most recent meeting this past Monday, Harris took six snaps deep in Calgary territory with no touchdowns. That thanks in large part to a DaShaun Amos knock down at the goal line. The lesson there? Sometimes you can call the perfect play at the perfect time and football just happens.

For the Esks and their fans the hope is when football happens between now and December it’s much more consistently productive showing for an offence too talented to not be finishing drives at a higher rate.