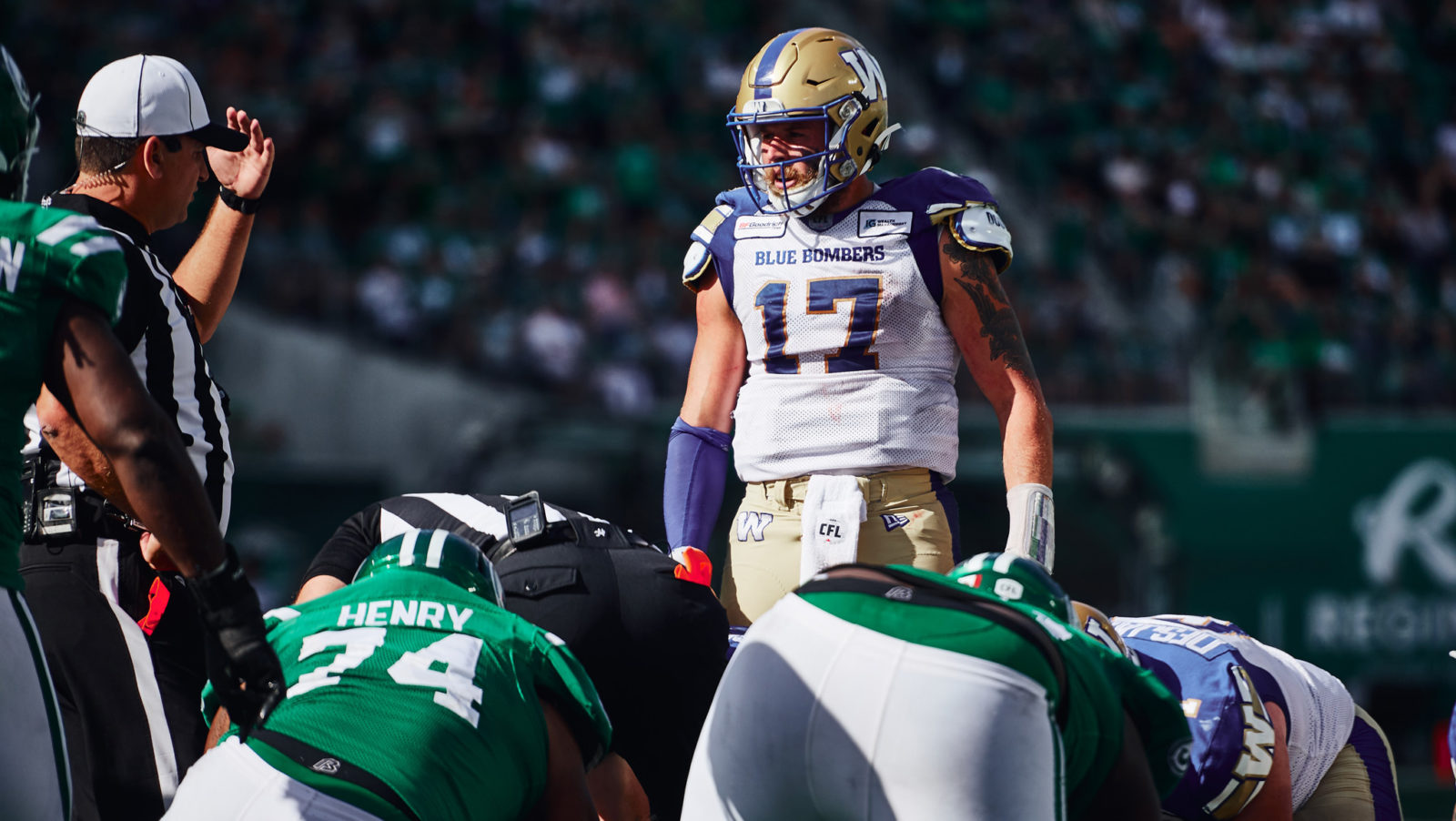 To hear Craig Dickenson describe it, it almost sounds post-apocalyptic.

His full roster on the field on an early September day, going full intensity in practice, but with no sound.

“I debated going completely silent, as opposed to noise,” the head coach of the Saskatchewan Roughriders said on Thursday. “I’ve done that before, where there’s not a sound in the stadium and nobody can say a word.”

These are the lengths that coaches have to go to when they’re tied up in their Mark’s Labour Day games. Saskatchewan rode the deafening noise at Mosaic Stadium to squeak out a 19-17 win on Sunday, stretching their win streak to six games and snapping Winnipeg’s three-game win streak.

On Saturday, it’s the Bombers turn to play host. They’ll be leaning on what’s approaching a sellout crowd at IG Field to return the favour and help them keep their hold on first place in the West Division.

The Banjo Bowl is of course just one of three territorial Labour Day rivalries. Edmonton and Calgary hate each other and as the fisticuffs and subsequent ejections and fines that came from the Hamilton-Toronto game on Monday demonstrated, the QEW that connects the two teams is certainly not paved with love.

Winnipeg and Saskatchewan have something different, though. No matter the iteration of the stadiums that house the games, the neighbouring prairie provinces are armed with the two loudest fan bases in the league.

“They’ve got good fans like we have. They make a lot of noise and it’s something you have to prepare for,” Bombers head coach Mike O’Shea said in the leadup to that trip to Regina.

“Any time you come to Winnipeg you’ve got to prepare for crowd noise. It’s nothing new.”

It’s nothing new to the coaches — O’Shea is in his 26th year in the CFL as a player then a coach and Dickenson is in his 17th — but every year players get to experience it for the first time.

Derrick Moncrief, the Riders’ linebacker that had six tackles, a sack and an interception on Bombers’ QB Chris Streveler, finally went from the sideline to the in-game experience.

“The buildup was good, both fan bases were good,” Moncrief said.

“Just watching from my previous two years, the excitement was there and the players played really hard.”

Bombers linebacker Adam Bighill will be playing in his second Banjo Bowl, after six years with the BC Lions. After the Riders swept the games last year, Bighill would love to get a win back in Winnipeg for Bombers fans and to keep that hold of first place in the West.

“Any time you can play in front of your home crowd and the environment is hostile and loud it’s helpful,” he said, after getting four tackles and an interception on Cody Fajardo.

“Saskatchewan was loud and it’s definitely a home field advantage. We’re looking forward to being in our place and having it on our side this time around.”

The experience is still relatively new to both quarterbacks as well. Streveler got his first taste of the rivalry a year ago this weekend, when he replaced an injured Matt Nichols at IG Field. With Nichols injured again this season, Streveler made 16 of 24 passes for 161 yards a touchdown and two interceptions in Regina and rushed for 65 yards and a TD.

Fajardo of course is in his first year as the Riders’ starting QB. With the home crowd behind him at Mosaic on Sunday, he made 25 of 39 passes for 300 yards, a touchdown and had two interceptions.

The 27-year-old won’t feel as comfortable this time around in Winnipeg.

“We talked about it all week,” Riders receiver Namaan Roosevelt said of what Fajardo can expect.

“We have music playing at practice, so we know what type of atmosphere it’s going to be. It’s going to be loud, fans will be talking behind our bench, screaming at us.

“Cody’s been doing a great job of making sure the offence is ready to go and executing at a high level. We’ve just got to keep it going. We know what type of game it’s going to be. We have to step it up and see what happens.”

“Quarterbacks and all players have an internal clock,” Dickenson said.

“They know when they’re up against it. We’ve talked about playing with poise and dealing with the noise and they’ve gone hand in hand.”