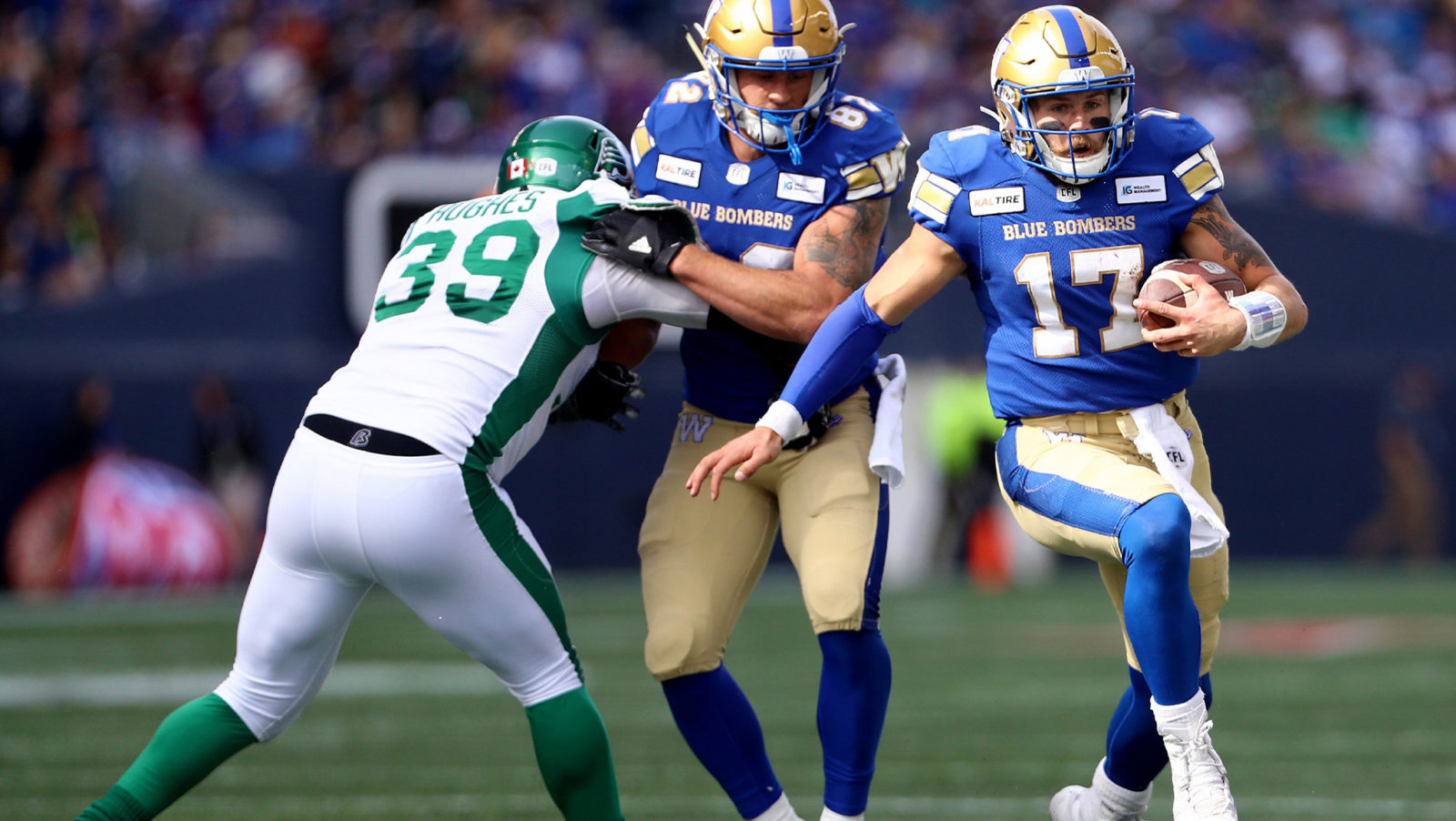 WINNIPEG — Going into their Week 13 clash with the Saskatchewan Roughriders on Saturday, the main question surrounding the Winnipeg Blue Bombers was how they would perform with some big offensive pieces out of the lineup.

The team was already without quarterback Matt Nichols, who’s dealing with an upper-body injury, and running back Andrew Harris, who’s serving a two-game suspension. Chris Streveler and Johnny Augustine slotted into their spots in the lineup and nearly led the team to a Mark’s Labour Day Weekend victory over the same Riders, but they came up just short in the end.

Ahead of this matchup, slot backs Lucky Whitehead and Nic Demski were both ruled out. As a result, Daniel Petermann and Rasheed Bailey were forced into bigger roles in the offence.

Every one of them rose to the occasion to help the Bombers capture the 35-10 victory and their ninth Banjo Bowl.

The first play of the game couldn’t have gone much worse for the Bombers, as they were backed up inside their own five after Streveler was sacked on the opening play from scrimmage. The signal-caller would bounce back immediately, however, getting the Bombers out of their own end with a 21-yard rush to gain the first down.

They were also aided in their movement down the field with a trio of penalties by the Saskatchewan defence. A pass interference call in the end zone set up Streveler’s first rushing score of the afternoon on a sneak play from just outside the goal line.

“It’s always nice to put together a touchdown drive to begin the game,” Streveler said. “It was kind of unique, taking a sack on the first play and then having to run it from the 2-yard line. But we just executed and took it one play at a time. It was a really long drive and thankfully we ended it with a touchdown.

“The focus was on scoring points when we got down there and we did a pretty good job of that.”

Streveler had his most impressive performance of the season under centre, completing 71 percent of his passes for 186 yards and two touchdowns as well as 70 yards and another two scores on the ground.

His biggest run of the day was a scramble out of the pocket that ended up going for 21 yards. It looked as though he would be taken down by Micah Johnson before he crossed the line of scrimmage, but Streveler was able to evade that tackle and then truck-stick another defender before getting down inside the red zone. After gaining another 7 yards on the following play, he’d find Petermann with a strike to the back of the end zone for the second scoring major of the game.

“That created such excitement on our bench, and it was really powerful stuff,” Bombers head coach Mike O’Shea said of Streveler’s run. “There are a lot of things he did very well and that one play where he refused to go down, I think his teammates really appreciated that.”

Streveler and Augustine would connect on a major in the second half. The running back would get in behind the defence in the middle of the field and the quarterback would float it over the heads of two members of the Riders’ secondary. From there, it was off to the races. He’d go 58 yards to the house, fully extending for the pylon in the process.

It was the first touchdown of 2019 for Augustine and the second of his CFL career.

“I’m very humble with it. It’s something we talk about, just seeing the matchups and seeing the film, so I’m very blessed,” Augustine said. “It’s not just me, it’s an effort of the whole team —  the offensive line. It was just a great character win.”

Augustine finished with 75 yards rushing and 63 receiving yards on two catches. Petermann had 33 yards on three catches while

It wasn’t just the offensive side of the ball where Winnipeg asserted it’s dominance. The defence made life extremely difficult on Riders pivot Cody Fajardo and the rest of the offence. Willie Jefferson led the way again defensively, getting three tackles, two sacks, and a forced fumble. Winston Rose also added two tackles and an interception that put the game on ice.

Return man Janarion Grant also helped inflate the team’s lead in the second quarter, taking a punt back 72 yards to make it a 21-3 advantage ahead of halftime. It was his third return of the season — his CFL debut saw him take two punts to the house.

“We all knew and everybody knew how close we were last week so we were still coming in with confidence,” Augustine said. “We have so much depth on this team that we’re confident. We see guys that are not on the active roster and they’re making plays. Like holy smokes, when this guy gets on the field, they’re going to make plays.

“Everyone’s going to count us out but we knew — I’m pretty sure everyone chose Saskatchewan —  that’s the strength of our team, and when everyone comes back, there you go.”

The Bombers head into their bye week atop the West Division standings. They’ll get a well-deserved rest period before getting back to work to prepare for their Week 15 clash with the Montreal Alouettes on Sept 21.