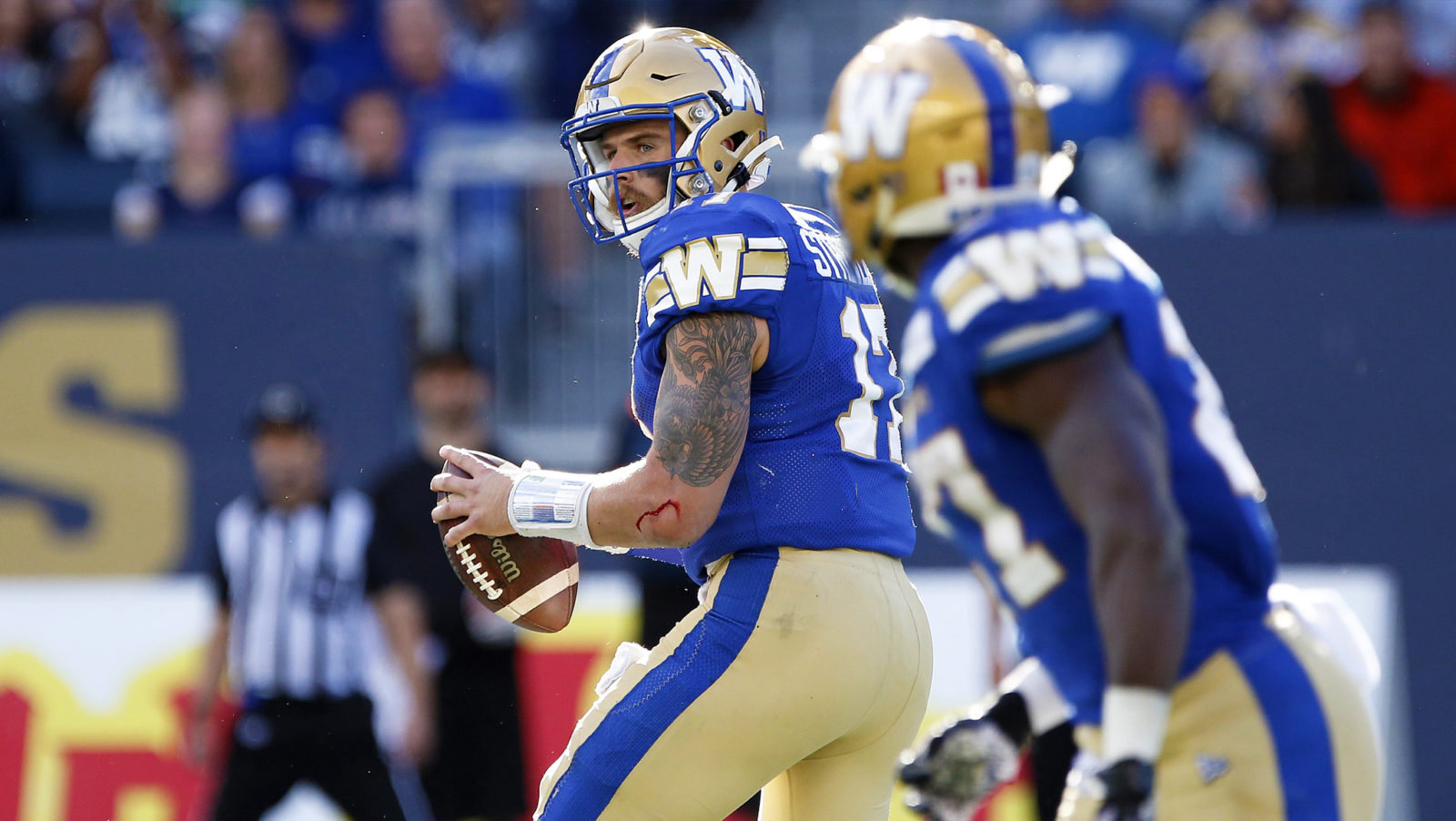 Hello, Tevaun Smith. A tennis-themed touchdown celebration in honour of Bianca Andreescu’s U.S. Open championship? My slow clap builds into a thunderous round of applause and I stand and cheer for your patriotism and creativity. Wait, the chair umpire is telling me to be quiet and to sit down and get writing.

1. MUST BE THE SHOES

You thought the Winnipeg Blue Bombers would remain one dimensional with Chris Streveler as their quarterback? Not so fast.

The sophomore pivot — decked out in ultra high top shoes that look a bit like old-timey wrasslin’ boots — made a number of terrific throws during the Bombers’ throttling of Saskatchewan in the Banjo Bowl.

Included: a back of the end zone, priority post-delivery to Daniel Petermann and a downfield bullseye to running back Johnny Augustine for another major.

Streveler didn’t post scintillating passing yardage numbers (186) and he did not air it out a ton — he went 16-for-21 — but he showed that the Bombers don’t have to rely solely on a powerful and diverse running game in order to get things done under his command.

2. FOR THE SAKE OF SCIENCE, WE NEED TO RUN AN EXPERIMENT

Streveler passed well in his team’s win but that doesn’t mean his greatest highlight came in the passing game, oh no.

His 21-yard run that preceded the Petermann touchdown pass was one of two slobberknocker moments from Week 13.

Trucking Saskatchewan linebacker Cameron Judge and then shaking off safety Mike Edem, Streveler’s run looked like so much fun that a number of his teammates just had to get in on it at the tail end, joining the fray like teenagers hitting the pool in a rapid-fire cannonball frenzy.

In Montreal, Als’ safety Bo Lokombo raced straight up the field and decked Lions’ running back Wayne Moore with a shoulder crunch that was so hard, I actually took a knee right in my living room trying to get my breath back.

That Moore hung on to the ball and popped right up to jog back to the huddle gives us a little bonus takeaway about how tough he is, too.

With the Alouettes leading by just four points and the Lions threatening to steal the thing from them while they snoozed, Lokombo’s “wakey-wakey!” jolt was just what they needed, on the way to a 21-16 win.

The experiment: Bo Lokombo, Chris Streveler. Straight at each other, full speed. You’re welcome, scientists investigating the origins of the universe.

BONUS TAKEAWAY: Another experiment; If I stand in Caronport, Saskatchewan – which is, apparently, exactly halfway between Winnipeg and Calgary – and if I fire a football straight up into the air, who picks it off? Winston Rose or Tre Roberson?

TSN’s Chris Cuthbert surprised even himself when that phrase popped out of his mouth during the BC/Montreal game on Friday night.

It was appropriate in the moment, even if it was a little jolting to hear it.

The BC Lions’ offensive line, continually the butt of jokes and target of maligning intent so far during the 2019 season, had a nice night against the Alouettes, even in a loss, and a sack given up against a three-man rush in the draining seconds notwithstanding.

They surrendered two sacks on the night but considering they’d gone into the game having surrendered 43 of them in their previous 10 — and countless near-sacks and ragdoll hits that came just after Mike Reilly had frantically rushed yet another throw — that was a pretty good improvement.

I won’t call new offensive line coach Kelly Bates a miracle worker or anything like that, but his early work indicates he has the unit on the right track.

I’m sure Reilly gave him a lingering man-hug of thanks, post-game.

Ironically, that’s something he’d not have been able to endure had he been subjected to the usual onslaught.

4. THE JAMES WILDER CRISIS APPEARS TO BE OVER

That’s something, isn’t it?

Just three weeks ago, it appeared that the running back’s days were numbered in Toronto after he declined to happily take a demotion to special teams play while Brandon Burks got an extended look.

Wilder was, on the night of the Argos’ August 16th game against Edmonton, a healthy scratch.

It was rumoured the Argos were shopping the 2017 Most Outstanding Rookie, although there were denials from the team. Maybe, just maybe, they’d have to cut him, we were told.

Astonishingly, the storm blew away, and Wilder was returned to starting running back status on Labour Day against Hamilton, and then enjoyed his best game of the season on Saturday, against Ottawa.

With three touchdowns to his credit (two as a receiver, one as a runner) and a total of 87 yards from scrimmage, Wilder appeared to be more like his old self, with the bulk of his production coming as the Argos attempted to take a stranglehold on the affair during the fourth quarter.

They did, with Wilder being used as a cudgel, although at least one critic (with Ottawa connections, I’ll assume) was heard to yell “you’re a front-runner, 32” at him as Wilder was enjoying the moment.

At any rate, the James Wilder Jr. drama seems to be done. For now, at least. History suggests there’s the chance of another chapter cropping up.

5. 100 DEGREES CELSIUS HAS BEEN REACHED IN EDMONTON

A bye week, perhaps, couldn’t have come at a better time for the Eskimos, who were turned away once again by the Calgary Stampeders on Saturday night.

At 6-6, and with the three stablemates ahead of them looking good to go as the autumn winds begin to blow, the Eskimos face a fulcrum moment as they scatter for a little rest and relaxation.

They could use the break. During their loss to the Stamps, teammates Josh Johnson and Vontae Diggs got into a spat with each other, a sure signal that the levels of frustration are high in Edmonton. You might take that as a sign of doom for an underachieving team (leading the league in the yardage categories on both offence and defence) but the ashes of that squabble might actually leave you feeling a little less concerned about a full unspooling if you’re an Eskies fan.

Diggs took responsibility for it all after the game. “It was my fault,” he told reporters. “It was nothing that Josh did. He did what he was supposed to do in the moment. He tried to calm me down and I just lost my cool. That’s on me.”

Diggs and Johnson aside, this is a team that needs to quickly find its way to a few wins. After the break, they’ll have gettable games against Ottawa and BC over the next month, but those aren’t the games that observers will most be interested in. It’ll be the two against the Hamilton Tiger-Cats that will be most telling — well, losses to Ottawa and BC would be rather telling, too, I suppose.

Earlier this season, the Eskimos looked like a contender for the title. Now, however, they’re another team trying just to find some traction.

AND FINALLY… Hang on a sec. You’re telling me that every starting quarterback has missed time due to injury this season except one, and that one is Mike Reilly, the most abused of them all? If you’re ranking surprises of 2019, that one would be right at the top of the list.