Steinberg’s MMQB: Destiny in their hands 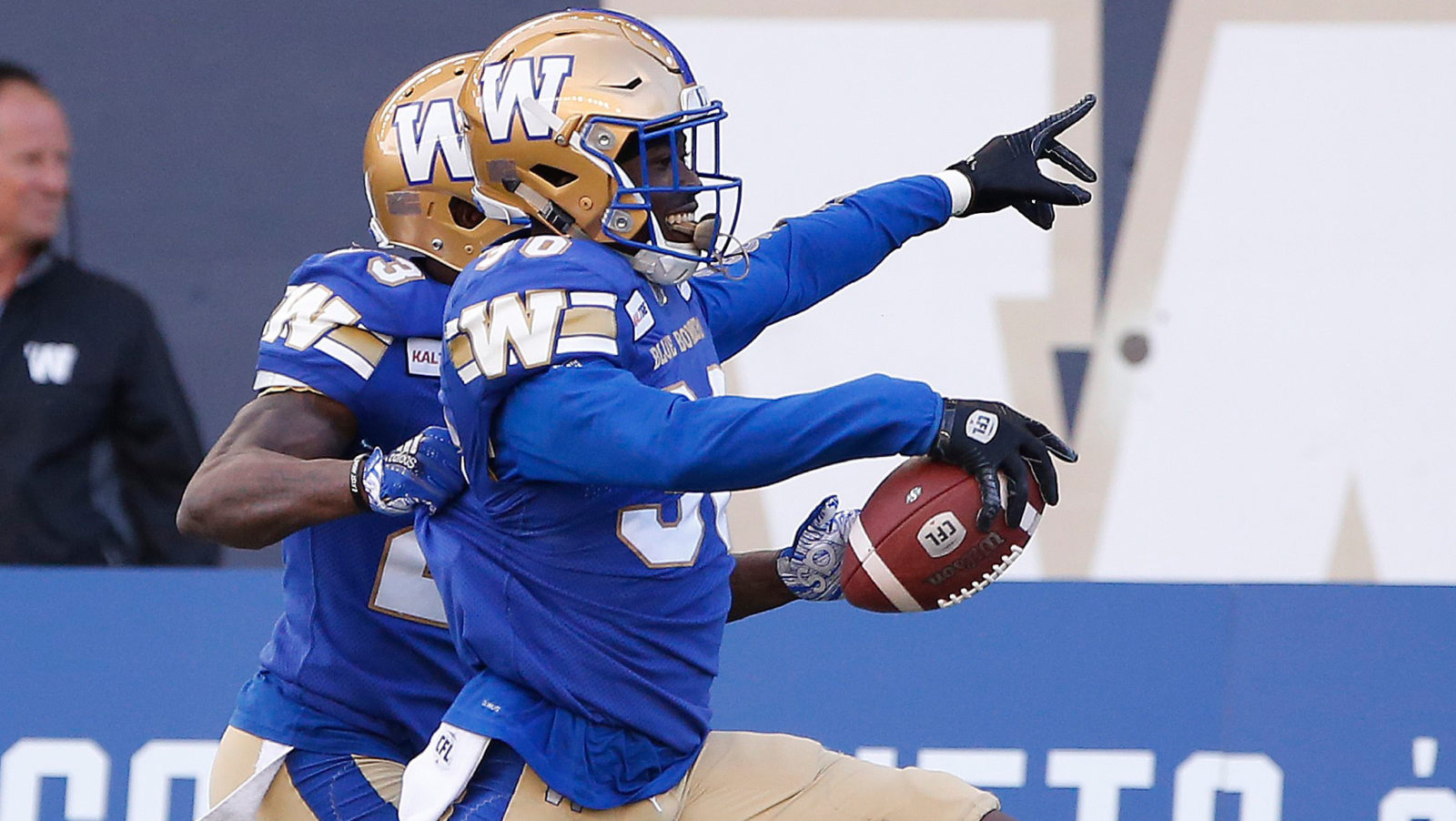 Steinberg’s MMQB: Destiny in their hands

Plenty of pre-season predictions had the Calgary Stampeders and Winnipeg Blue Bombers as favourites in the West Division. Well, here we are more than halfway through the 2019 season with the Bombers sitting on top of West with the Stamps tied for second. The best part is, both teams have very similar schedules down the stretch with first place up for grabs.

After a tough loss in Regina over Mark’s Labour Day Weekend, Winnipeg bounced back with a huge 35-10 win over the Riders on Saturday afternoon. At 9-3, the Blue Bombers are in the driver’s seat to lock up a first round playoff bye, albeit with a difficult remaining schedule.

In their final six games, Winnipeg has nothing but playoff-bound opponents on the docket: two with aforementioned Calgary, two with Montreal, and singles against Saskatchewan and Hamilton. Sure, that’s a difficult stretch to finish off the year, but there’s plenty of bright side if you’re a Bombers fan.

Half of the team’s remaining games are against teams they want to keep behind them in the division, which gives Winnipeg control over their fate. Furthermore, following this week’s bye, running back Andrew Harris returns to the fold, which gives the Blue Bombers their most important player back for a crucial stretch drive.

RELATED
» Rewind: All the best highlights from Week 13
» Bombers’ depth shines in victory over Riders
» Stamps sweep Esks in Battle of Alberta

Much the same can be said about the Stampeders, specifically from a schedule standpoint. Calgary has seven games to go and their remaining slate includes two with Winnipeg, and then single games against Saskatchewan, Hamilton, Montreal, and BC. Once again, it’s those three games against their West Division playoff foes that loom largest.

The Stamps seem to be trending in the right direction at the right time of year. With a 33-17 win at Commonwealth Stadium Saturday, Calgary has swept this year’s three-game Battle of Alberta and has the Eskimos a game-and-a-half behind them. I don’t think it would surprise anyone if the Stamps were to finish the regular season on one heck of a roll.

Reigning Most Outstanding Player Bo Levi Mitchell is back and looks like the dominant force he’s been for the last five years. Additionally, Calgary’s offensive line has taken huge strides since Week 1 and Brent Monson’s defence has returned to being one of the best in the CFL. This looks like a formidable foe.

I’ve yet to focus on one team here and that’s the Roughriders. Saskatchewan is licking their wounds heading into a fascinating Week 14 game with Montreal and their schedule keeps them right in the fight, too. That schedule may not have the appeal of a home-and-home set that appears for the Stamps and Bombers, but Sask still has games with each of those teams left and a season ending doubleheader with Edmonton.

With the way things look right now, and with each team’s remaining games in 2019, the West Division is anything but decided through 13 weeks of football. Winnipeg, Calgary, and Saskatchewan all have legitimate claims to first place. After that we likely get to see these three teams duke out in the playoffs.

In a great spot

Hamilton is running away with the East Division. The West is as tight at the top as we’ve seen it in quite a while. Because of that, it’s easy to forget about the impressive season being had by the Montreal Alouettes. Now 6-4 on the year, the Als sit virtually untouched at second in the East and it would be a shock if they weren’t hosting a crossover team in November.

Montreal got the job done for a third straight win Friday night as they dispatched the Lions 21-16. The story that is “Big Play VA” continues to grow; quarterback Vernon Adams Jr. threw for a touchdown and ran for two more as the Alouettes’ offence continues to come at opponents in waves.

I like what Montreal is doing right now with the ball. In addition to what Adams is doing, the Als boast a group of receivers where any one of Eugene Lewis, DeVier Posey, or Quan Bray could go off for a monster game. And with William Stanback and Jeremiah Johnson both in the backfield, Montreal has found a nice “thunder and lightning” run game.

And don’t discount what this group is doing defensively. In five of their last seven games, the Alouettes have held opponents to 22 points or fewer. I know some of Montreal’s defensive totals don’t look overly attractive, but a few rough games have inflated a lot of their averages. All in all, I think the Als have a pretty solid defensive group.

As it stands right now, Montreal holds a three-and-a-half game lead on Ottawa for second spot in the East. Barring a fairly epic collapse, the Alouettes are very much in line to host a Division Semi-Final in November against a crossover team from the West. With what I’ve seen from Montreal the last two months, I’m not signing up for a trip to play them on their turf.

The plight of the Edmonton Eskimos is an interesting one. With their home loss to Calgary on Saturday, you can make it three straight losses for the Esks. They’ve dropped back to fourth in the West Division and continue to have all kinds of trouble turning promising drives into touchdowns. To make matters worse, the immediate future of quarterback Trevor Harris is up in the air after leaving Saturday’s game midway through.

All that is the bad news for Edmonton. The bright side is the fact they still have a big leg up on Ottawa for a playoff spot. At 6-6, the Eskimos have three more wins than the 3-8 REDBLACKS with one more head-to-head matchup remaining. With how Ottawa has struggled recently, a giant surge doesn’t seem to be in the cards.

This leaves head coach Jason Maas and Edmonton in an interesting spot. The team has six games and two byes remaining on their schedule and a chance to finish further up the West Division standings. Even though there’s not an immediate threat of the Esks missing the playoffs, Maas has to keep his team hungry and driven so complacency doesn’t set in. 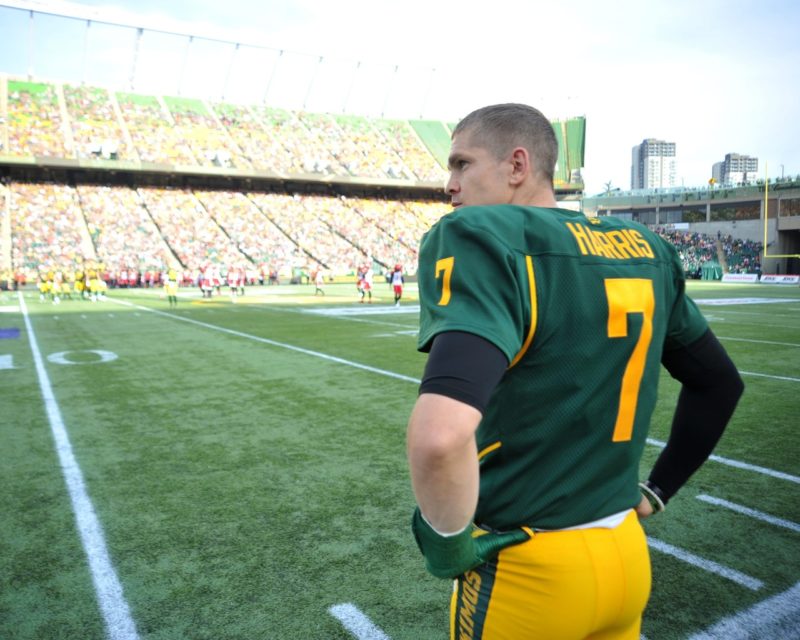 I’m curious to see what Maas does between now and Edmonton’s next game against Hamilton in Week 15. With a bye week to prepare, perhaps this coaching staff can figure out some solutions to their red zone woes. At the same time, a week off could be exactly what the doctor ordered for Harris to be back in action.

One thing that interests me is something Jeff Krever brought up in last week’s CFL Fantasy Podcast. Edmonton possesses a very interesting weapon in tailback Shaq Cooper, but they haven’t used it much at all. I’m a huge CJ Gable fan and I think he remains a vital piece of this offence, but using a dynamic weapon like Cooper has the potential to really open things up.

In Cooper’s only start this season, he ran for 128 yards and a touchdown on 22 carries while adding 48 more yards on five catches. Cooper’s speed would be a really nice compliment to Gable’s steadiness and reliability. Most importantly, a more multi-faceted run game could really open up passing options for Harris and company when things grind down inside the 20.

Fans in Edmonton are frustrated right now, which is fair. The Eskimos have lost all three games against arch-rival Calgary, they’ve fallen to fourth in the division, and many of their losses look strikingly similar.

All is not lost in Alberta’s capital, though. Edmonton still has the CFL’s top passing attack, an effective run game, and a defence that ranks number one against the pass and number five against the run. What’s key for Maas and crew is to use this bye effectively and come up with a few new wrinkles offensively. Doing that could make this stretch drive a whole new ballgame.