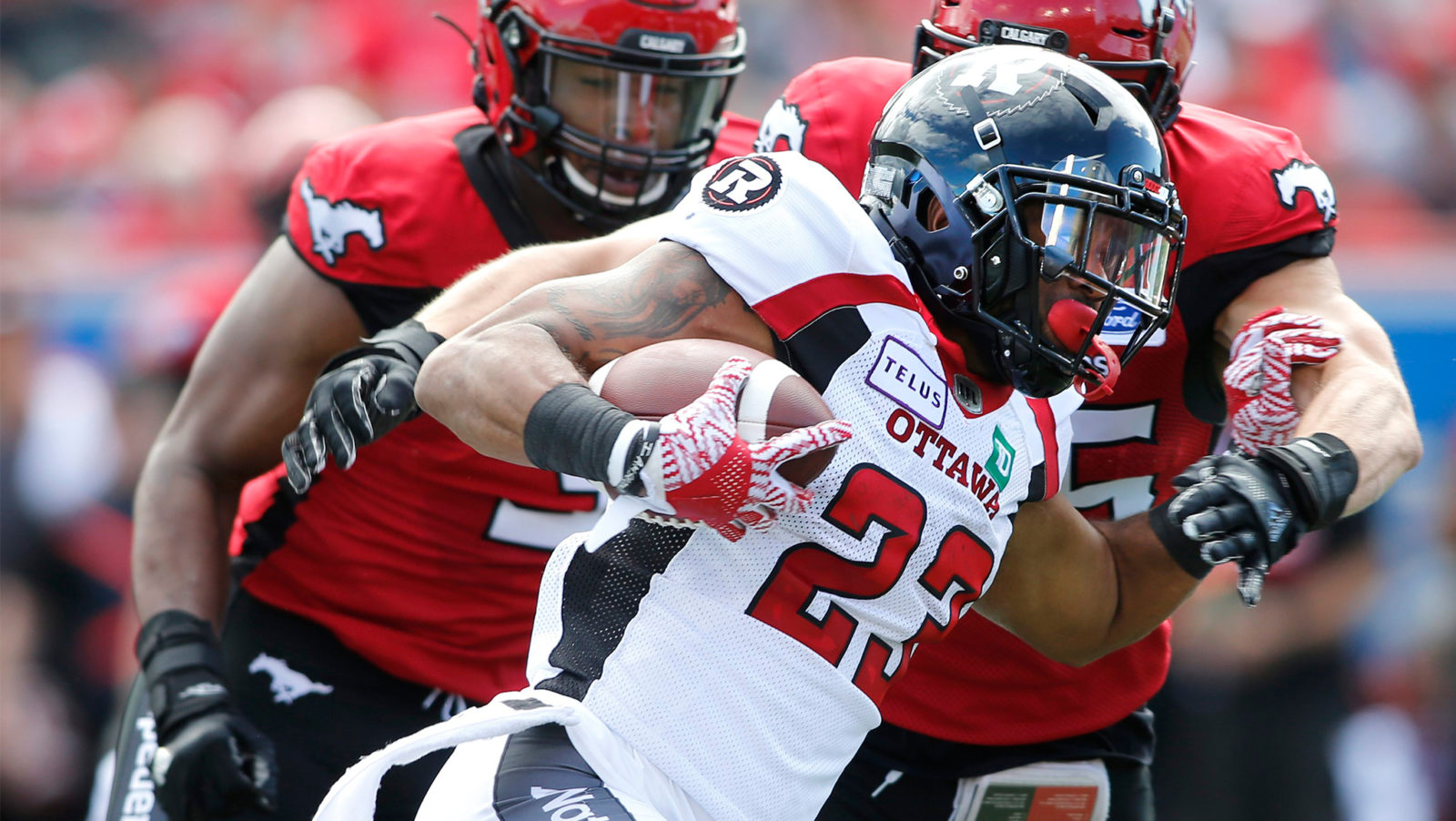 REDBLACKS receiver Brad Sinopoli ($6,880) will miss Friday night’s game vs. the Lions. Nate Behar ($2,500) will take his place in the slot and offers bargain buy appeal.

The Ottawa Sun‘s Tim Baines reports that Mossis Madu ($6,816) will make a second consecutive start for the REDBLACKS. Madu had just 21 rushing yards vs. the Argos, but produced a career game through the air with 12 catches on 14 targets.

After being replaced by Will Arndt ($5,000) late in a loss to Toronto, it appears Jonathon Jennings ($5,581) will remain the REDBLACKS’ starting quarterback. That should be the arrangement the rest of the season barring unforeseen circumstances.

First-year running back John Crockett ($4,984) is not expected to return this week, according to Tim Baines. Crockett is undoubtedly Ottawa’s featured back when healthy, but for now Mossis Madu ($6,816) will handle backfield duties for the REDBLACKS.

It appears Jerminic Smith ($2,500) will get another start for the REDBLACKS this week. The rookie caught four passes and also rushed once for 11 yards in his debut, and is a buy-low candidate against the struggling Lions.

Lions running back John White ($6,547) will remain sidelined for Friday night’s game vs. Ottawa. White was on the one-game injured list vs. Montreal and was replaced by Brandon Rutley ($4,749).

Brandon Rutley’s ($4,749) will start at running back for the Lions this week. It’s a second consecutive start for Rutley, who had a strong performance against Montreal as he looks to spark a struggling offence.

According to TSN’s Kyle Melo, receiver Luke Tasker ($6,612) has remained sidelined at Ticats practice so far this week. Tasker hasn’t played since Week 10 but is eligible to suit up this week if he’s ready.

The Ticats have signed veteran running back Tyrell Sutton ($6,541). Sutton has already practised with the team and could suit up this week, though he won’t be available in Fantasy until he’s added to the active roster, which would likely happen on Friday.

American running back Cameron Marshall ($5,311) has yet to return to practice for the Ticats. Marshall was placed on the six-game injured list before Labour Day and will miss at least the next few weeks.

Despite being listed as the starter on Labour Day, Anthony Coombs ($3,658) had just two touches for the Ticats. The former third overall pick is talented as a pass-catcher, but is a risky Fantasy play, especially if Tyrell Sutton ($6,541) makes his debut.

A year after being drafted as a defensive back, Jackson Bennett ($3,500) has emerged as a legitimate weapon for the Ticats at running back. He had 12 carries for 77 yards and a touchdown while adding three receptions vs. the Argos on Labour Day.

Stamps running back Don Jackson ($6,183) was activated from the injured list but did not play vs. the Eskimos in Week 13. Jackson will have to wrestle the starting job from Ka’Deem Carey ($5,163) before becoming an impactful Fantasy player again — though that could happen as early as this week.

Fantasy users may want to check the depth chart before starting Ka’Deem Carey ($5,163) this week. He’s shown plenty of upside this season, but his job as the No. 1 running back is tenuous at best with Don Jackson ($6,183) looming close behind.

No word yet on the status of injured receiver Markeith Ambles ($4,408), who was on the one-game injured list during last week’s win over Edmonton. If he can’t go, Josh Huff ($2,500) would continue to play in his place.

Former Oregon receiver Josh Huff ($2,500) has made eight catches over his last two starts in place of Markeith Ambles ($4,408), but could be back on the bench this week should Ambles return.

With Jeremiah Johnson ($5,890) expected to miss Saturday’s game, William Stanback ($8,346) could see a heavy workload vs. the Riders. Stanback was eased back from his injury for Touchdown Atlantic a couple of weeks ago before touching the ball 17 times in a win over BC.

According to Didier Ormejuste of RDS, Jeremiah Johnson ($5,890) won’t suit up to face the Riders on Saturday. Johnson left last week’s win over BC and was reportedly placed in concussion protocol according to TSN’s John Lu.

After being cut by the NFL’s Chicago Bears, Jordan Williams-Lambert ($4,772) has signed with Saskatchewan through 2020, but according to Craig Dickenson will have to wait another week to debut. Make sure he’s out of your lineup for Week 14.