Berg vs. Ferg: Can Jennings, Franklin resurrect their careers? 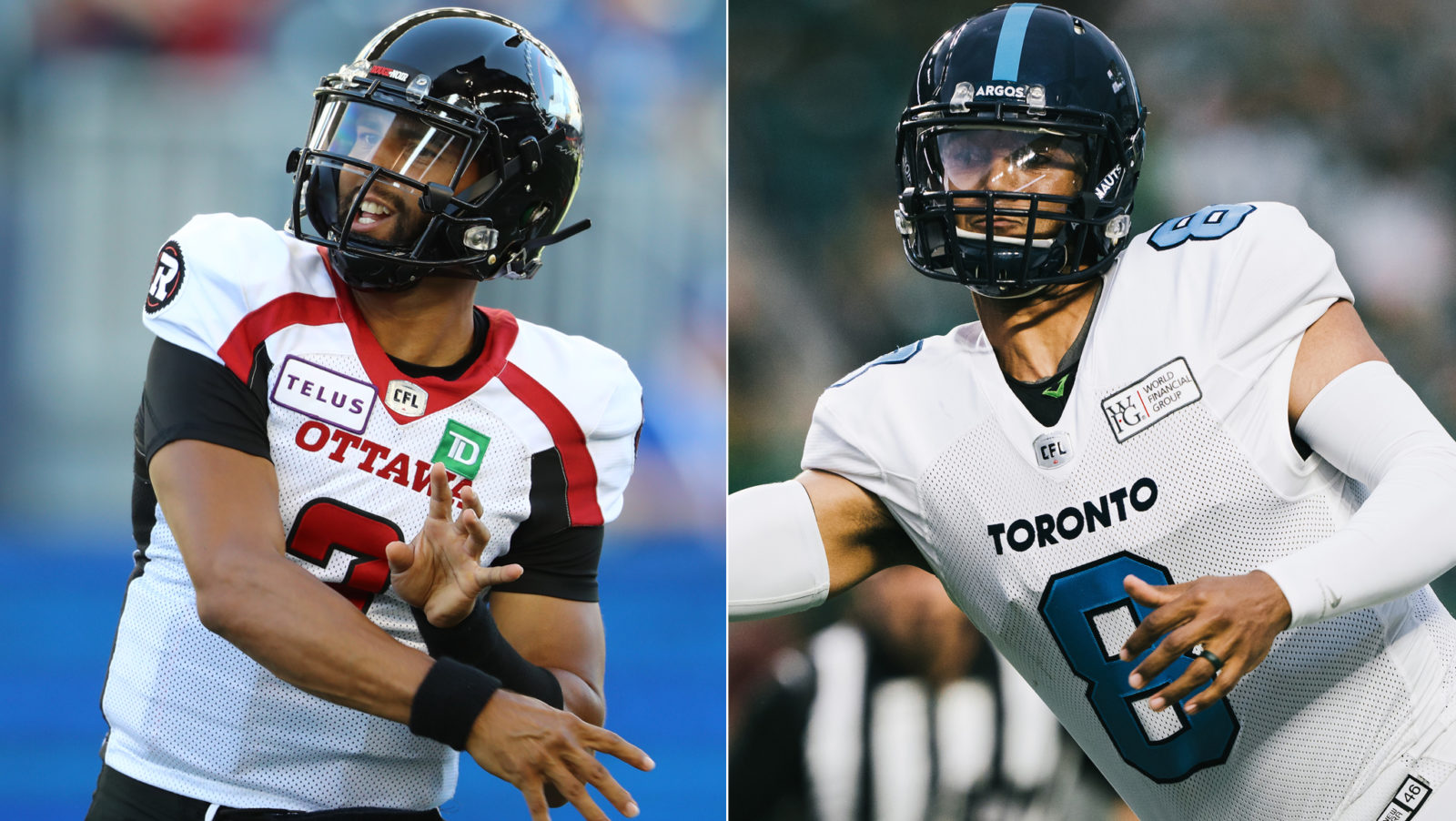 Berg vs. Ferg: Can Jennings, Franklin resurrect their careers?

Berg vs. Ferg is back for 2019 as columnists Pat Steinberg and Marshall Ferguson debate over some of the league’s most contentious storylines. This week’s question: Out of James Franklin and Jonathon Jennings, which quarterback has the better chance to resurrect his career?

TORONTO — Three years ago, Jonathon Jennings, then of the BC Lions, was putting together his first 5,000-yard passing season as a professional quarterback.

One province over, Edmonton Eskimos pivot James Franklin was emerging as one of the league’s most highly-regarded prospects as the understudy to Mike Reilly.

How quickly things change in the Canadian Football League.

Jennings is ready to make his third start as a member of the REDBLACKS this weekend. He’ll have something to prove against his former team and the general manager that let him go in Ed Hervey.

RELATED
» Nye: Who are the best receivers in the CFL?
» Morris: Attention to detail key for Lions’ O-line
» CFL Simulation: The Stamps are surging

In Toronto, James Franklin is firmly entrenched as the backup to veteran journeyman McLeod Bethel-Thompson. Franklin lost his job after being injured in Week 3 having made just eight starts as an Argo.

Quarterback can be a difficult position to evaluate. Every player is unique, with development curves varying from person to person. Coaching, systems, supporting cast and opportunity all significantly impact one’s ability to succeed.

But for every late bloomer, from current Bombers starter Matt Nichols to an all-time great in Anthony Calvillo, there are many more that either never figure it out or just don’t get the opportunity.

At 28 and 27 years old respectively, can Franklin and Jennings resurrect their once promising careers that made them top prospects?

James Franklin’s time in Toronto hasn’t gone according to plan. 2018, his first year with the Argos, was turbulent but ended with promise. Franklin’s 2019 has been just as frustrating, but this time for something out of his control. Franklin sustained a hamstring injury in Toronto’s second game of the season and hasn’t started a game since. But while things haven’t gone as he or the Argonauts have envisioned, I believe there’s still plenty of upside left in Franklin.

In a lot of ways, we still don’t really know what Toronto has in Franklin. He was thrust into the spotlight earlier than expected last season thanks to a Ricky Ray injury and was kept on a very short leash. Then, after yielding his gig for a number of weeks, Franklin returned as starter late in the season. Franklin was significantly more effective late in the season than in the earlier stages, which gave the Argos a glimpse of what this guy was capable of.

There are a lot of attributes to like about Franklin. He’s extremely athletic, which makes him elusive in the pocket and a threat to run at any time. Franklin’s career average of 5.4 yards per carry speaks to his ability to turn nothing into something. He also possesses an explosive arm and the ability to throw on the run, which we’ve seen on display many times. Franklin has yet put it all together as a starter, but that doesn’t mean he won’t.

There’s a reason why this guy was coveted during his time as Mike Reilly’s understudy in Edmonton. Before being traded to Toronto, Franklin had done nothing but impress and tantalize when on the field with the Eskimos while racking up a 12-1 touchdown to interception ratio. The Argonauts weren’t the only team interested in Franklin’s services prior to the 2018 season, because he has a lot of very unique gifts.

Not all quarterbacks put it together right away and Franklin’s teammate in Toronto is a perfect example. McLeod Bethel-Thompson finished his college career in 2010 and yet hasn’t truly come into his own until this season. After bouncing around with numerous teams and leagues, it has finally clicked for Bethel-Thompson.

Let’s not forget, Franklin has just eight starts under his belt while being at the top of Toronto’s depth chart. I know he hasn’t always impressed since joining the Argos, but the sample size is way too small to write him off completely. I still think there is a lot to like, but it might take a little longer than most had expected for it all to come together.

There’s just too much talent.

It’s not exactly a scientific take, I understand the stats and the lack of consistency from down to down doesn’t necessarily suggest that Jonathon Jennings is on the path to reclaiming his 2016 magic as a member of the BC Lions. But then you watch the guy make those one or two throws, and your jaw just drops.

Is his package limited at times? Yes.

Does he miss some easy throws? Yes.

Can he throw against his body on a rope down the sideline in a way that most professional – CFL or NFL – quarterbacks can only dream of? Yes.

For my money, that’s why Jennings is still in the CFL after being beaten up and turned down several times in BC before exiting for Ottawa in free agency.

In Ottawa, Jennings found arguably the perfect landing spot. A team in flux with no established starting quarterback that is looking for hope and a plan moving into 2020. What is better at giving hope than a quarterback who can make throws that feel like he could change the game at any moment?

While all of this sounds great in theory, I understand it’s a lot of rainbows and sunshine for a guy who has yet to put it all back together. But if you are looking for a player with supreme talent who is capable of reclaiming it, I believe the combination of fit and opportunity for Jennings is second to none.