O’Leary: Wynn making most of new opportunity with Ticats 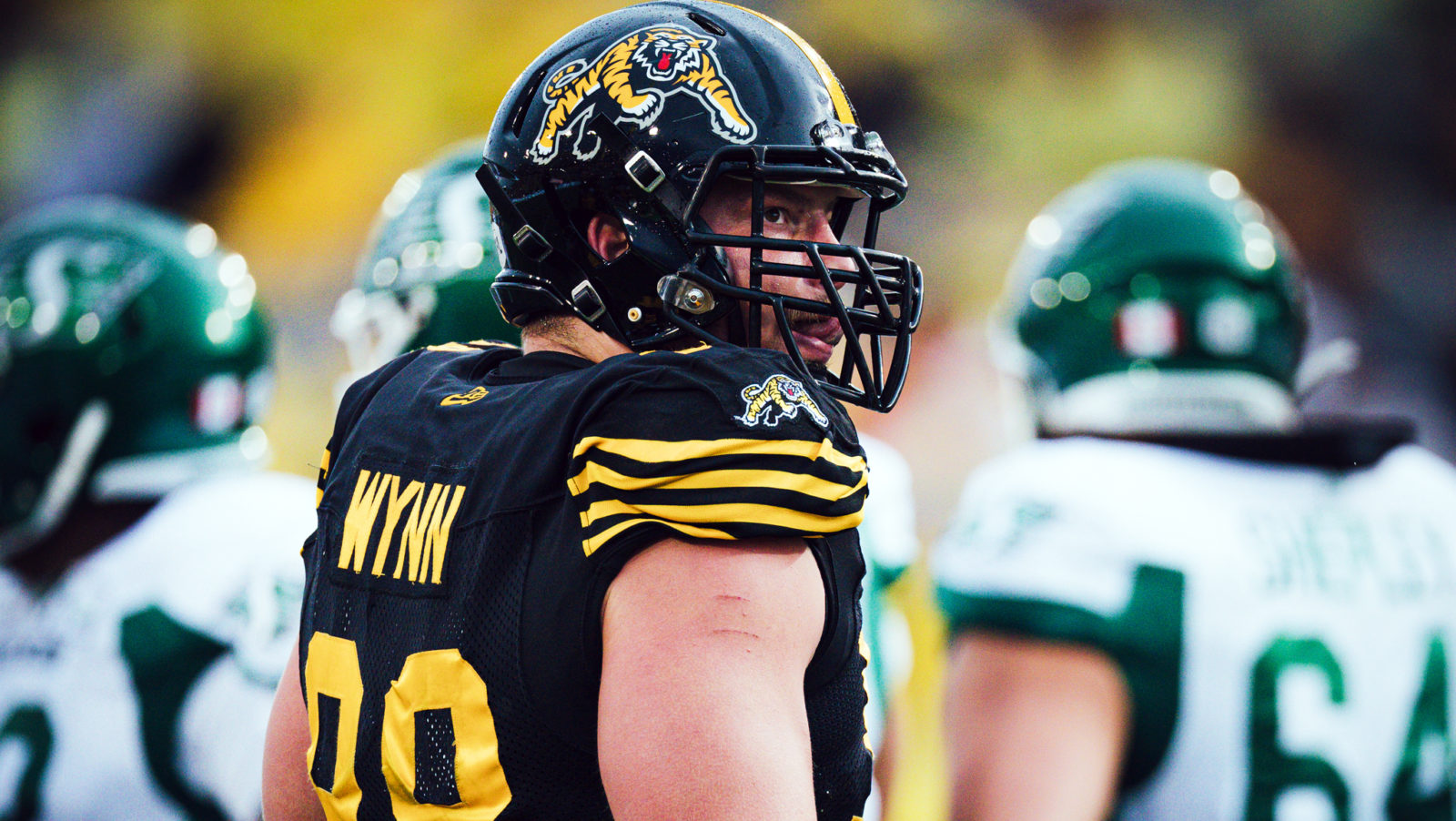 O’Leary: Wynn making most of new opportunity with Ticats

When the calendar flipped from 2018 to 2019, Dylan Wynn knew he’d be playing football in the coming year. He just didn’t see it unfolding the way that it has.

The 26-year-old defensive lineman had spent the past two seasons with the Toronto Argonauts, winning a Grey Cup with the team as a rookie in 2017. He weighed his free-agent options and on Feb. 19, opted to stay in the States. He signed with the Arizona Hotshots of the Alliance of American Football.

Wynn hoped for the best when he signed, that the league would catch on and that he could at least play out his contract. Standard contracts were three years with a total salary of $250,000 U.S.

The league ceased operations on April 2, but Wynn saw the writing on the wall before many others.

“We had…a week or two before it closed down all of us had I want to say an extra 500, 600 bucks in our cheques. Everyone was like, ‘Where’s this coming from?’” Wynn said. “A lot of guys didn’t want to question it.”

RELATED
» Trading Places: Skill set has Bennett on other side of the ball
» O’Leary: Time to put respect on the Ticats’ name
» Weekly Say: Are the Ticats getting enough respect? 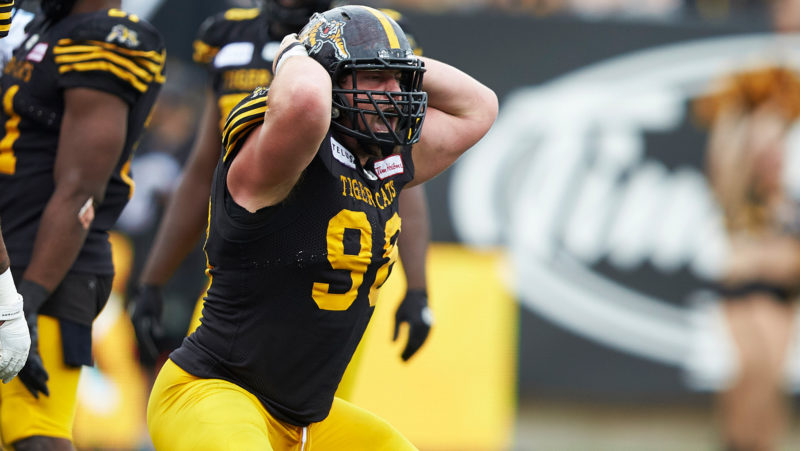 Wynn got some more concrete evidence that something may have been up just before what turned out to be the team’s final game. Hotshots quarterback John Wolford pulled Wynn aside when he noticed something.

“We had just won a big game in San Antonio. We were the No. 1 team in the league,” Wynn said. “Wolf saw the guy (from the AAF) who ended up shutting everything down. He saw him on the field before the game with his family, walking around, looking around.

“What he had said, I remember this very vividly because it was after the game and we’re all getting treatment, this was the day before we all found out.

“(Wolford) goes, ‘Yo, I think I think we’re done. This guy was part of the XFL before. And his last game with the XFL he was quoted saying that he’d brought his family down to the field and they looked around and just took it all in.’

“He was doing the same (stuff) at our game.”

Wynn joined the Hotshots with their season in progress and was recovering from an injury, so he only recorded five tackles in his time with the team. The players all lived in the same complex, so when the league did shut down, they were able to commiserate together. It felt like dorm living, Wynn said, so when someone suggested getting a keg it seemed like the natural next step. The team had its day together, said its goodbyes and when Wynn got home he had essentially made his decision: He wanted to go back to the CFL.

He was a late addition to the Ticats’ roster, signing on May 8. That late arrival has been a blessing for one of the league’s top defences. Wynn is enjoying a career year in Hamilton, with a nine-sack season in 11 games. He had eight combined in 26 games through his previous two years in Toronto.

“I’m just trying to do my job the best I can,” Wynn said.

“I’ve been put in a lot of great situations this year and luckily, I’ve been able to do my job in those situations. Football is just a collection of little moments and I’ve been lucky to be on the positive sides of my little moments.”

Ticats’ o-lineman Mike Filer was thrilled to have Wynn go from an opponent on game days to a teammate to line up against in practice.

“I love Wynn. I said to him a couple of years ago when he first started playing in Toronto that I thought he was probably one of the toughest d-linemen to go against,” Filer said. “At that time, Toronto didn’t have the best record but it didn’t matter. He went out there and he played like they were a 15-3 team. That’s what he brings to this locker room.

“He wants to be great. I don’t think he has any desire to be good. He doesn’t take plays off,” Steinauer said. “Those aren’t words. You can turn on practice tape, you can turn on a game film (and see it). That starts there.

“He’s a self-motivated athlete. He’s a team-first guy, great character. He’s been a nice welcome addition. He’s a blue-collar guy that fits in our organization, our community and our football team for 2019 perfectly.” 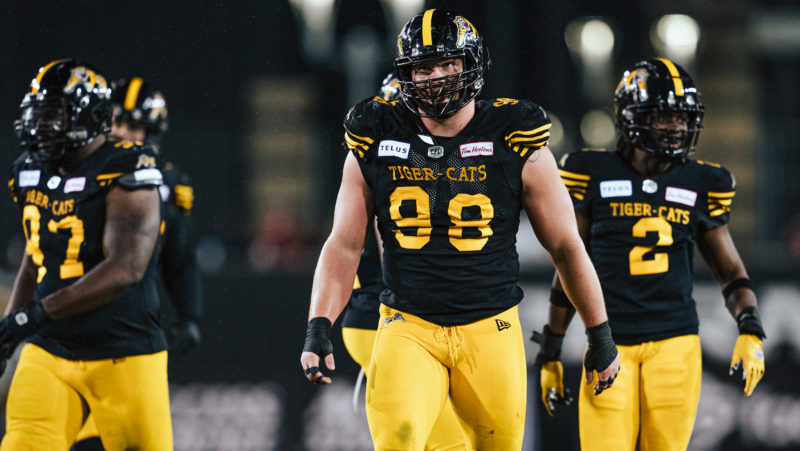 Fans are getting to know Wynn better through his sack celebrations. There’s some variety on them — he touched on that with CFL.ca’s Brodie Lawson on The Waggle last week — but his go-to move has been jumping, crossing of the legs and a hip swivel that conjures up images of 1980s wrestling legend Ravishing Rick Rude.

That’s a little bit before Wynn’s time, but he’s familiar with the wrestler and his moves.

“I just thought it was funny,” he said. “The first time I did it I think I was in Toronto last year and just got people talking about it.

“I used to be a big wrestling fan. That’s not the idea behind it but I’d love for it, if that’s what people get out of it, that’s what they get out of it. It also makes people think I have rhythm and that’s a great little facade.”

The celebrations are about the only thing that Wynn does that don’t have his coach singing his praises.

“Nah,” Steinauer said when he was asked if he liked the celebrations.

“But he’s passionate about them.”

Tolerating a players’ foolishness while he racks up sacks for your team is a good problem to have.