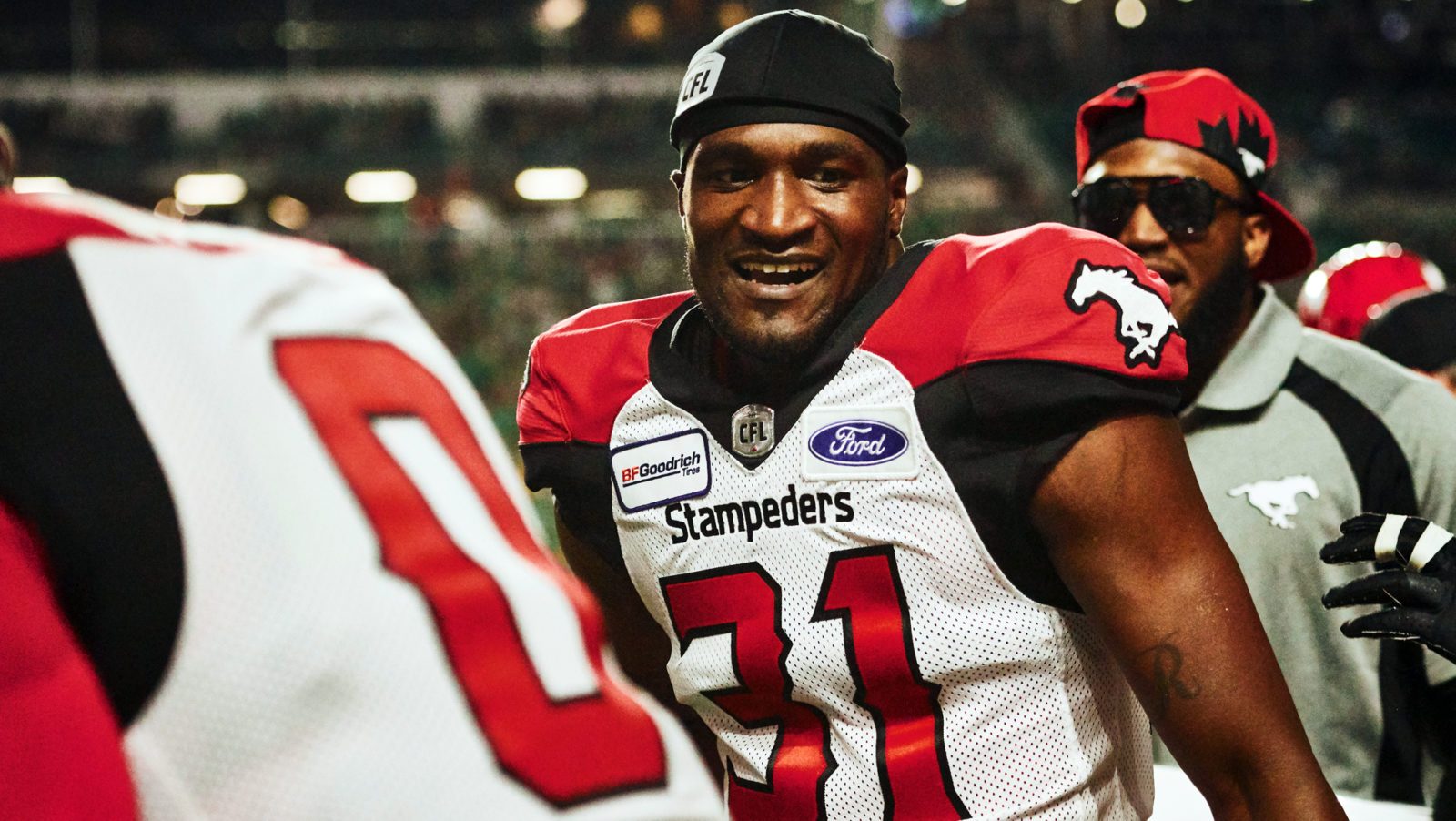 I’ve watched the play at least a dozen times and I’ll probably watch it at least a dozen more. Not to take away from Rod Black and Duane Forde’s call of the moment or analysis on the replay, but all I can think of when I watch the clip is Kevin Harlan’s booming, rumbling voice notifying us that we’d just seen a man fly.

Tre Roberson’s blocked field goal attempt is the perfect highlight. It’s freak athleticism, it’s perfect timing and it’s peak drama, a play that preserves a win for his team. It was a no-brainer as the No. 1 in our Timbermart Plays of the Week and (in my eyes, at least) it’s a frontrunner in the highlight of the year race.

At the risk of being one of those people that puts their phone in your hands and step-by-steps you through the minute details of something that they care about more than you do, let’s go through a few of the finer points of this clip.

It’s like he’s floating. When TSN shows you the replay of the block, they have a tight shot of the ball being snapped. Dane Evans catches and plants the ball down, laces out for Lirim Hajrullahu’s swinging foot. The shot pans out as the ball is kicked and there’s Tre Roberson, with more than his waist floating above the scrum. More. Than. His. Waist!

When he was a senior at Illinois State in 2016, his vertical leap was measured at 37.5 inches. To my uneducated eye, he’s added to that leap in the last three years.

Roberson told reporters after the game that they knew Hajrullahu kicked a low ball. Which brings us to the next point.

It hit his elbow. You see things like this in lower levels of other sports sometimes. A man-child on the volleyball court that overjumps a pass from his setter that’s meant for regular human beings. A foolish guard drives to the basket and thinks they can quickly lob a layup over a player that’s a foot taller than them. Roberson just hung there in the air like a character in the Matrix. They might have anticipated a low kick, but no one may have anticipated Roberson skying the way that he did. The ball might have been able to go upwards of a foot higher and he still would have gotten a hand or finger or two on it.

Tell Danny Austin he was right. In covering the Stamps for Postmedia, Danny Austin has watched the league’s preeminent franchise closer than just about anyone in the country. He was vocal (to say the least) about the rest of the media voters not choosing Roberson as the West rookie of the year in 2018.

I don’t know 100% if he’s eligible, but I can’t see how anyone in the league other than Tre Roberson can win Most Outstanding Rookie this season.

I asked Stamps rookie corner Tre Roberson (who was the clear choice for Most Outstanding Rookie in the West for anyone paying attention) about not getting the West’s nomination for the year.
His answer pic.twitter.com/tLnYtHNOX5

He had three interceptions and two forced fumbles last year, along with 54 tackles. He’s been on a mission to make his name a household commodity this year. Twelve games in, he’s sitting at seven interceptions — one behind Winnipeg’s Winston Rose for the league lead — two touchdowns and 36 tackles.

Rookie of the year isn’t an option anymore, but Roberson is making his name known across the league, first with a breakthrough 2019 and now with the kind of highlight play that can live on for weeks, months, sometimes years. We saw a man fly on Saturday and it feels like he’s just getting started.