Accuracy Grades: Who was on target in Week 14? 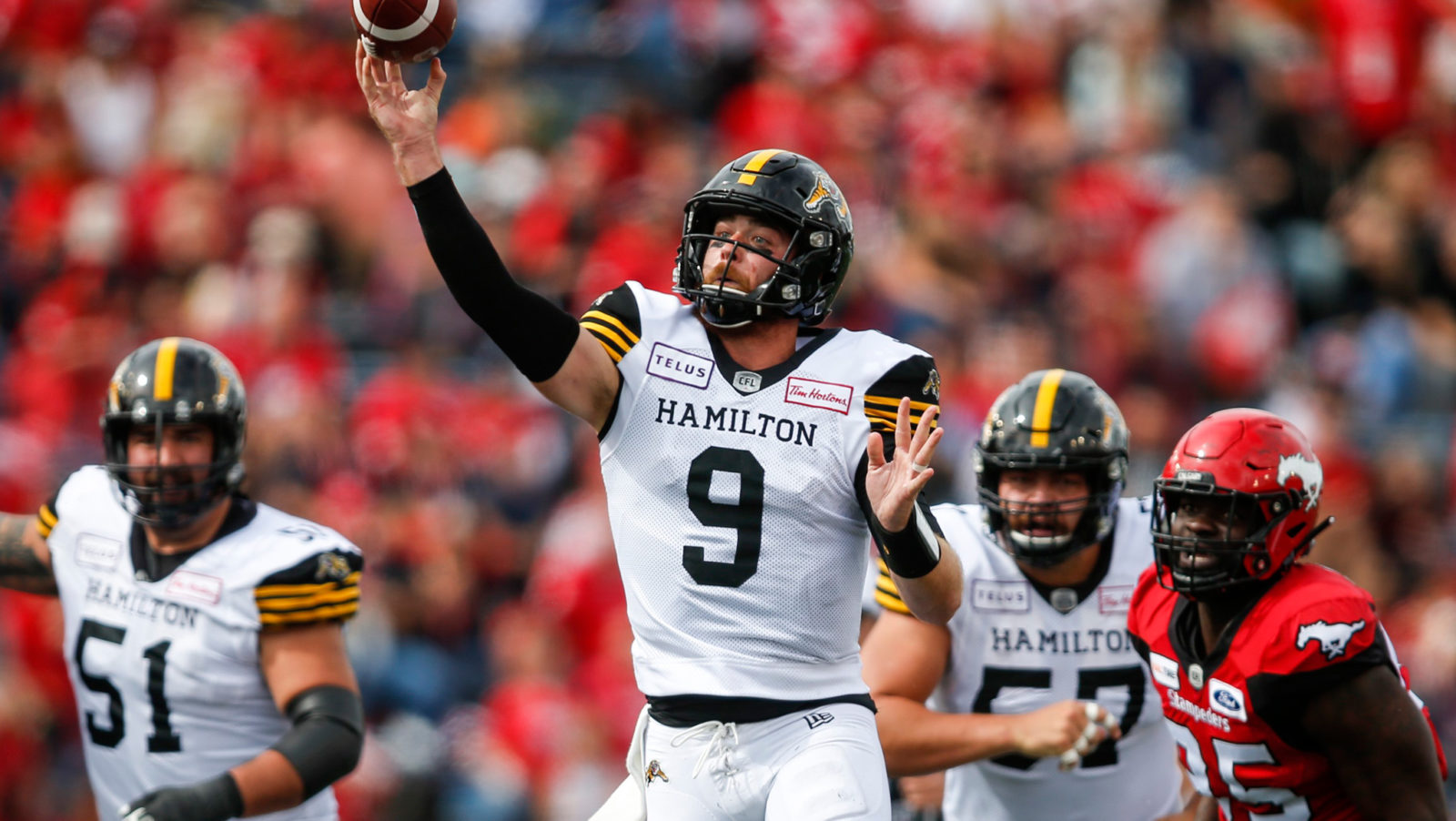 Accuracy Grades: Who was on target in Week 14?

Before Calgary hosted the Hamilton Tiger-Cats this week, I caught up with Calgary QB Bo Levi Mitchell after he finished his third walkthrough as the born-again starter for the Stamps.

I told Bo I hated not being able to get my usual hundreds of throws to analyze as a result of the pectoral injury that held him out for the majority of 2019 season thus far.

I mentioned in this weekly piece following Week 13 that Bo is a victim to his own aggression as accuracy grades don’t take into account the difficulty of a throw or the yards in air per attempt.

Maybe down the road I’ll be able to find a sliding scale that properly paints the picture of what the true value of each throw is, but for now it’s all about putting the ball in the right place regardless of the challenge presented by each toss.

Here is a look at the Week 14 accuracy grades: 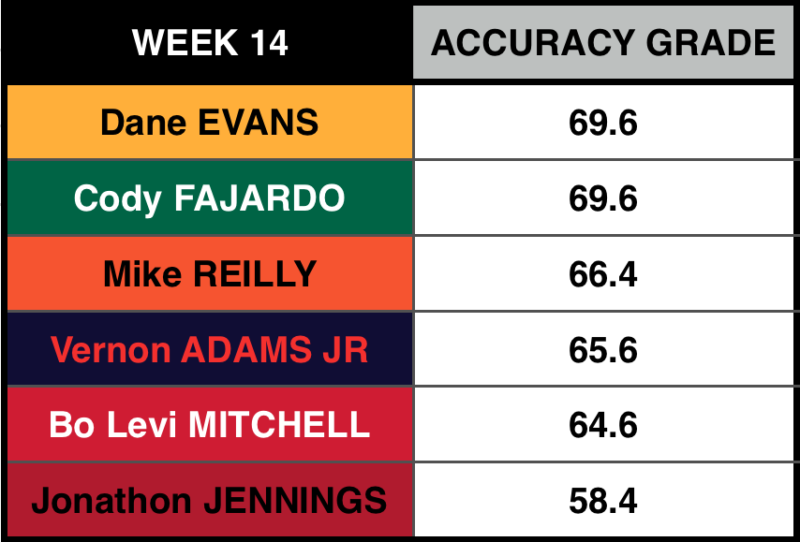 Jonathon Jennings posted the low mark of Week 14 in his return to BC Place as starter for the Ottawa REDBLACKS. Jennings struggled to find the groove and at times appeared to force the ball downfield in an attempt to send a message to his talkative general manager Ed Hervey, who had some critical comments to make about his departed huddle leader this past week.

For Jennings it was a drop off rare seen so far this season as he posted the best accuracy mark in the entire CFL just last week against the Argos.

Ahead of Jennings was Bo Levi Mitchell, who improved considerably on the accuracy grade scale from last week’s Labour Day rematch in Edmonton but couldn’t reach the grade set in his return to starting in Calgary on Mark’s Labour Day Weekend.

Rounding out the bottom half of the Week 14 grades was Montreal starter Vernon Adams Jr. in his matchup with the Riders in a crazy Saskatchewan environment. Vernon has made a bunch of spectacular throws this season both off and on balance and did so again this week, but his tendency to miss a couple of big ones hurt the Alouettes down the stretch. 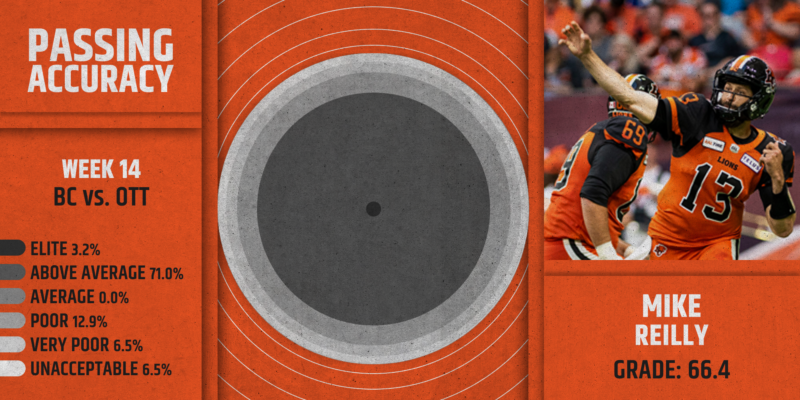 THAT is what Lions fans have been waiting for. Put aside for a second, if you can, that the REDBLACKS pass rush seemed completely ineffective or that Reilly clearly had superior athletes running open in space against the Ottawa defence consistently.

Reilly was straight upslinging it all over the place against Ottawa on Friday night and I hope the trend continues and sets a tone for the Lions 2020 season. 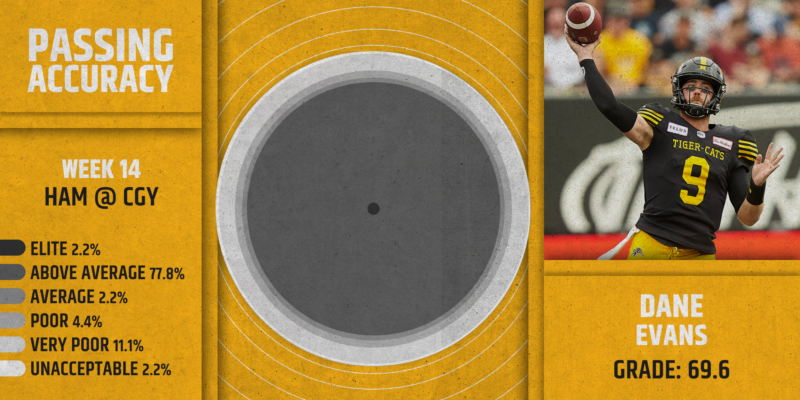 The Ticats were not able to extend their four game winning streak but Dane Evans put on a show for his dad and former high school coach Damon Evans who made the trip from Texas to take in his son’s starting role for the first time in the Canadian Football League.

Dane had a couple of outstanding throws which allowed him to tie for the top mark of the week and would have easily taken top spot in Week 14 if not for the interception thrown down the left sideline to Tre Roberson, whose sizeable length advantage caused issues for the Ticats on both defence and special teams all afternoon. 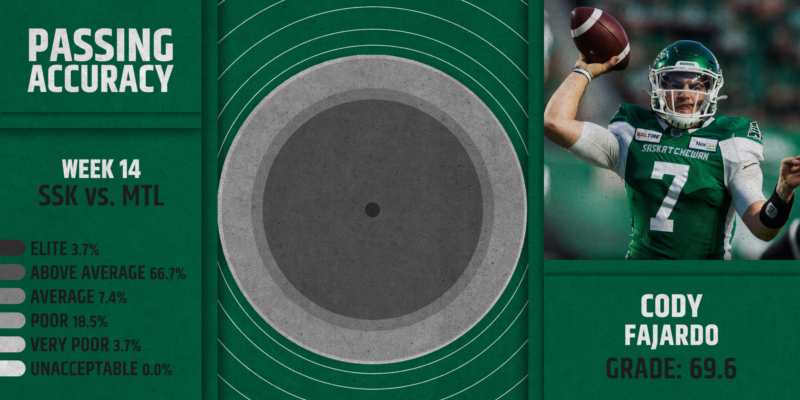 Just like Vernon Adams Jr., Fajardo continues to find a way, albeit with a slightly higher accuracy grade on the season. Saturday evening was a matchup of two great gamers with Fajardo barely coming out on top. While the completion percentage wasn’t his best, and accuracy grade was far from his season high, Fajardo continues to improve and progress as we head down the stretch which has to keep Riders fans excited as any fan base in the league right now about their quarterback play.

Now a look at the season standings: 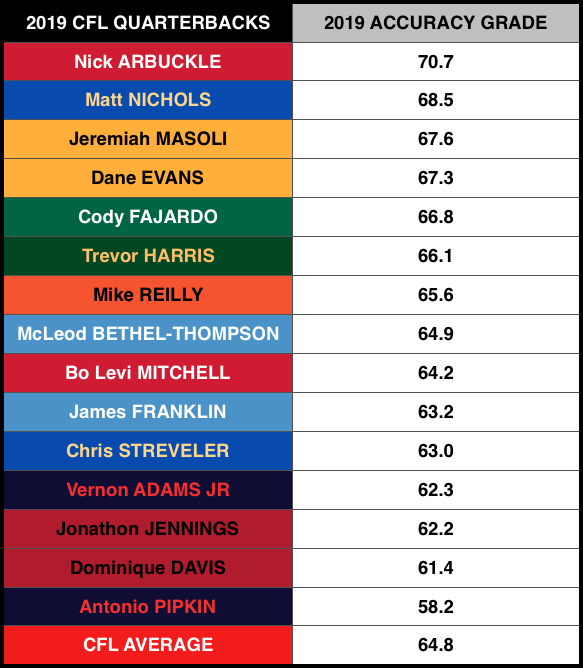 It was pretty straightforward this week. Arbuckle is a backup, Masoli is done for the year and Nichols has yet to return while also on a bye week.

The only movement of the entire week was Vernon Adams Jr.’s performance in Saskatchewan allowing him to leap frog Jonathon Jennings who struggled in BC.

I’ll be back next week with a full slate of four games to break down!