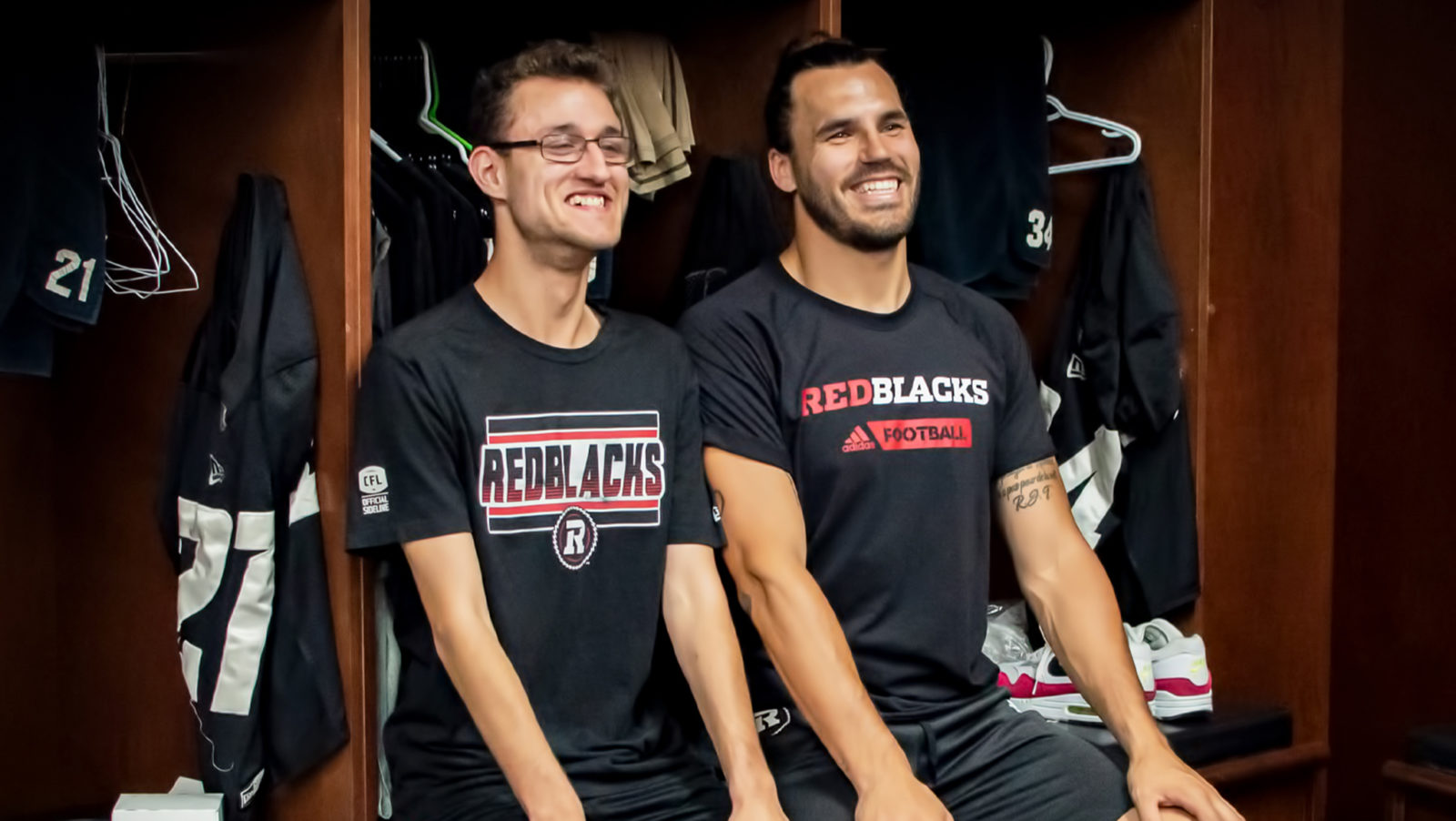 Bolduc smiles with a camper while on a TD Place facility tour. (Roch Lambert photo)

OTTAWA — It’s a perfect August day at TD Place and the sounds of football are in the air.

Tackle dummies are getting thwacked, passes are being caught and high-fives are being exchanged.

Managing the organized chaos of this camp is REDBLACKS player JP Bolduc, easygoing in a man bun and quick to flash a smile.

The camp, put on by Autism Ontario in conjunction with Bolduc, is called JP’s Football Training Club; today’s session — the last of the summer — is being hosted by Bolduc and a handful of teammates at the same stadium in which they routinely play in front of 24,000.

It’s a natural role for the 28 year-old from Montreal, and one he has embraced since shortly after he joined the REDBLACKS.

“When I first came to Ottawa, we had Moton Hopkins (and) he was running this camp for autistic kids,” remembers Bolduc, now in his fourth season with the team. “I hopped in with him — I was on the practice roster and I had a little more time — and the rest is history.” 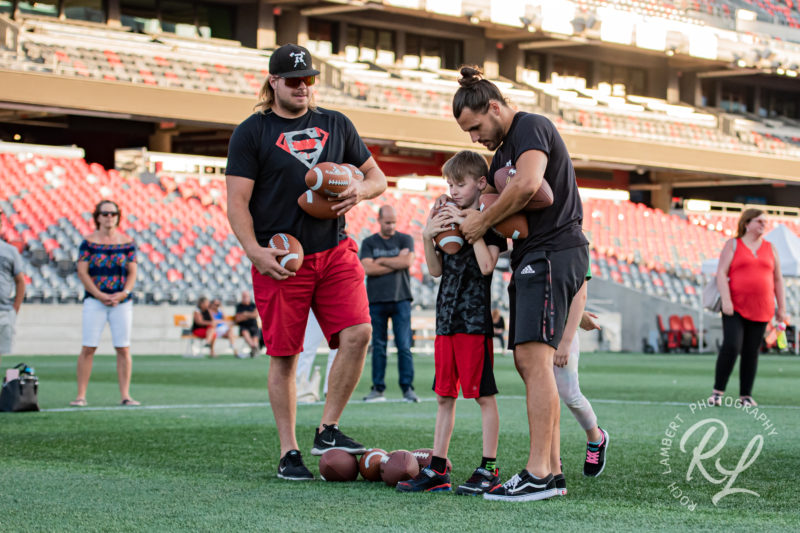 Bolduc (right) helps a camper while teammate Mike Klassen (left) looks on during the final session of 2019; all campers received pizza, a team hat and facility tour of TD Place. (Roch Lambert)

It’s no surprise to see Bolduc involved in the Ottawa community; his own path to professional football was marked by people who put an emphasis on making a non-sport impact.

“I remember when I was in high school, we had Alouettes guys come and talk to us (and) what they said about football and school stuck,” says Bolduc, who has made Ottawa his home year-round. “10 years later, I ran into one of them, Phillip Gauthier, at one of our games and said ‘hey, here I am doing the same thing, making sure kids believe in themselves’.”

The game took Bolduc to Quebec City and the famed Laval Rouge et Or, where he discovered his football status could help him make a difference off the field.

“One of my coaches, (CFL alum) Mathieu Bertrand started a program where we went to elementary schools and talked about our past, and how we became players,” he remembers.

That experience awakened something for the young player, and helping out Hopkins with his initiative was a natural fit after making the jump to the REDBLACKS. 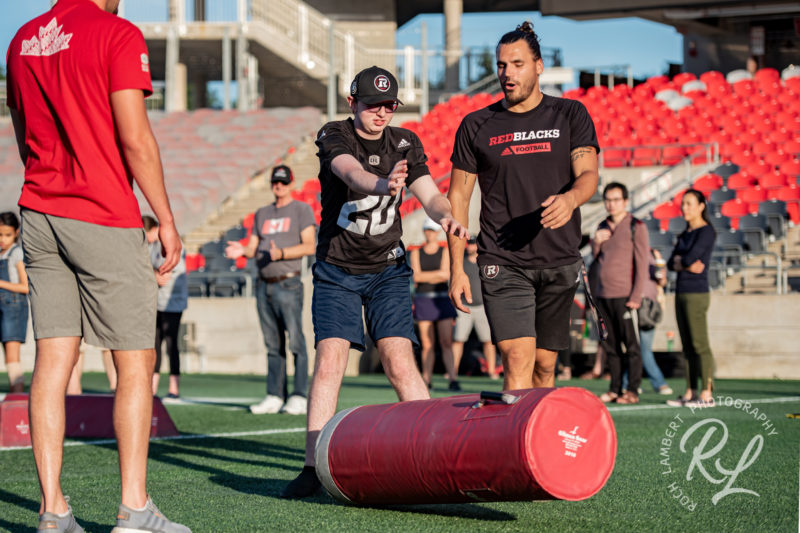 Bolduc walks a camper through a tackle dummy drill during the final session of 2019 at TD Place. (Roch Lambert photo)

If there were an award for ‘Most Interesting CFL-er’, Bolduc would almost certainly be in the running.

From his extensive volunteering, to coaching and teaching at a Gatineau high school in the off-season or marauding the globe in search of enlightenment, he brings a lot to the table.

“I travel a lot, I went for a month and a half to southeast Asia,” he laughs. “I wanted to train like these muay thai fighters in southern Thailand — every off-season I’m trying to gain some life experience.”

And, of course, there’s his new home base in Ottawa.

“If you’d have told me five years ago I’d be living in Ottawa full-time…I’d never have believed you,” chuckles Bolduc, whose girlfriend lives in Montreal. “It’s an amazing city, (and) you need to be here to realize how fun it is. There’s always stuff going on.”

Let it be known that Bolduc gets as much out of his community involvement as the kids he mentors.

“To see these kids smile, it’s worth it,” he says. “It makes you feel good.

“I won’t lie, this year we’re having a tough season, (and) it’s tough to get out of the football mindset,” explains the Rouge et Or alum. “When you go to these camps, with these kids, it brings back what’s important in life.

“How we’re lucky to be healthy, and in our position. It keeps us grounded.”

One thing is clear: When a child takes a handoff or throws a fluttering semi-spiral at TD Place in front of 24,000 empty seats, a handful of REDBLACKS players and their proud parents, it’s sport at its purest.

And in some ways, moments like those — a kid breaking into a huge smile, or a parent beaming on the sidelines — run deeper than anything that happens here on a professional football gameday. 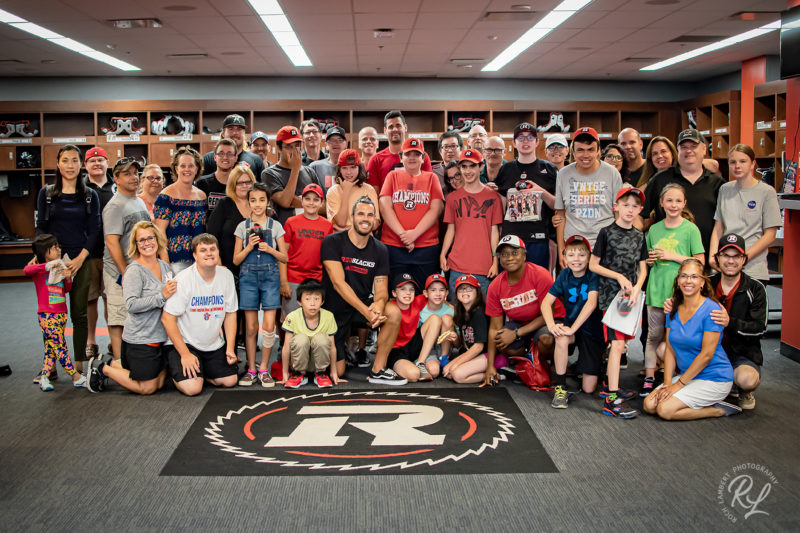