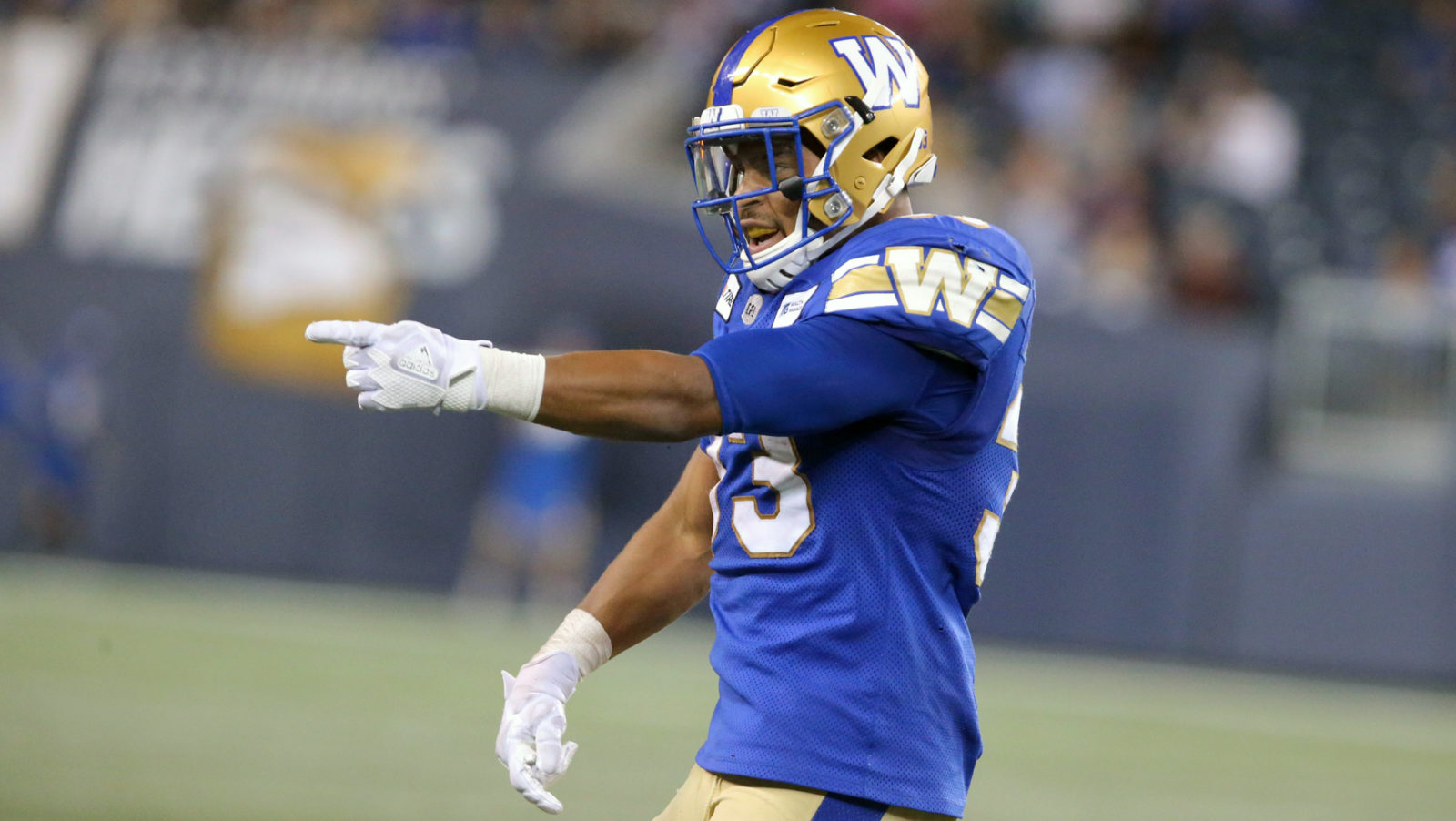 By all accounts there were no jokes and no lighthearted exchanges with the faces surrounding him on Tuesday.

Andrew Harris is focused on his work.

The Winnipeg Blue Bombers running back last stepped onto the field on Aug. 23 against Edmonton and when he stepped off of it, his team had won and Harris was the league’s leading rusher, with 908 yards.

Almost a month later, Harris is still the league’s leading rusher, but a lot has changed around him.

The 32-year-old tested positive for the banned substance Metandienone and received a two-game suspension, as per the CFL and CFLPA’s drug policy. Harris has maintained that a supplement he used was contaminated and that the violation occurred unintentionally. He’s since sent that supplement away for analysis and is awaiting results.

In our first MOP Watch of 2019, we have to start with Harris. Before the positive drug test, he was the early favourite to be named the league’s top player. In the four years he’s played for his hometown team, Harris has been the key to the Bombers’ offence and the point from which GM Kyle Walters has built a Grey Cup contender.

With Harris back in the lineup this week and with a late-season return from QB Matt Nichols, the Bombers are, on paper, still a Grey Cup contender; maybe even a favourite. They’ve weathered multiple injuries and Harris’ suspension and still hold on to the top spot in the West with a 9-3 record.

Harris’ award-season push could be the one thing that isn’t salvageable this year.

Last week, TSN’s Dave Naylor polled 36 media members across the country that cover the CFL, asking them if they’d vote for Harris, given the failed test. Seventeen said no and 11 said that they would. Naylor also asked coaches and GMs from every team, Winnipeg excluded, if they would vote for Harris. Ten said no, while only two said yes.

Which brings us back to IG Field, where the Bombers began to prep for their trip to Montreal, where they’ll face the Alouettes on Saturday night. Chris Streveler said he saw an excitement from Harris in practice.

“He’s pissed off,” O’Shea told reporters. “He’s not in any mood to chat and he’s just not going to exchange pleasantries. He’s angry.

“I’m sure that will turn into something productive for him.”

RELATED
» The Waggle, Ep. 176: Bright spot in BC?
» Weekly Say: Which September addition will help most?
» CFL Simulation: Bombers favoured to win the West

The Bombers have six games left and though it came in a way that nobody wanted, they’ll go into that stretch with their most lethal offensive weapon rested and apparently, angry. What could an even more fired up, an even more determined Andrew Harris be capable of in these coming weeks?

The failed drug test has clearly hurt Harris on a personal and emotional level. The one thing that can’t be voted on, that can’t be determined by media and coaches’ votes is a Grey Cup win. That’s something that it feels like the Winnipeg Blue Bombers are closer to this year than they have been since 2011, when they fell to BC in the Grey Cup game. Harris, of course, was with the Lions then and was named the game’s most outstanding Canadian.

All that’s standing between Harris and lifting that trophy for the second time in his career are eight, maybe nine games. That’s indisputable.

Brandon Banks, Hamilton — Banks’ case for MOP is similar to Harris’. With Jeremiah Masoli out for the season, he’s the most important part of his 9-3 team’s offence. Banks goes into Week 15 second in the league in receiving yards, with 967 and six touchdowns. He’s still dangerous on returns, where he’s taken two missed field goals back for touchdowns.

Trevor Harris, Edmonton — Despite dealing with a forearm issue on his throwing arm the last few weeks, Harris is leading the league in passing yards. The Esks’ record — they’re 6-6 after starting the season 3-1 — will need to improve dramatically over the last third of the season for the MOP talk to get any more serious for Harris at this point.

Cody Fajardo, Saskatchewan — Fajardo is a great story this season, coming in as a backup, being thrust into the starters’ job a couple of minutes into the season and steering the Riders to an 8-4 record. Through three years as a backup in Toronto and BC, he drew little attention as a free agent but has put himself in position to be the Riders’ QB of the future. Can a first-year starter win the MOP award? We’ll find out over the next six games in Saskatchewan.

Willie Jefferson, Winnipeg — That two Bombers are in this conversation is both a testament to the depth that Kyle Walters has built with his team and to Jefferson himself, whose impact on a game can be profound enough to warrant recognition beyond the defensive player of the year award. Whether it’s interceptions, sacks, forced fumbles or recoveries, Jefferson has found ways to get his team into the win column.

Vernon Adams Jr., Montreal — Similar to Fajardo in Saskatchewan, Vernon Adams Jr. has come off of the depth chart and roared into the starting lineup, taking his team higher than anyone could have expected this season. With the Als at 6-5, though, Adams would have to take them even further — catching Hamilton in the standings could do it — and play exceptionally well to legitimately enter the MOP race.