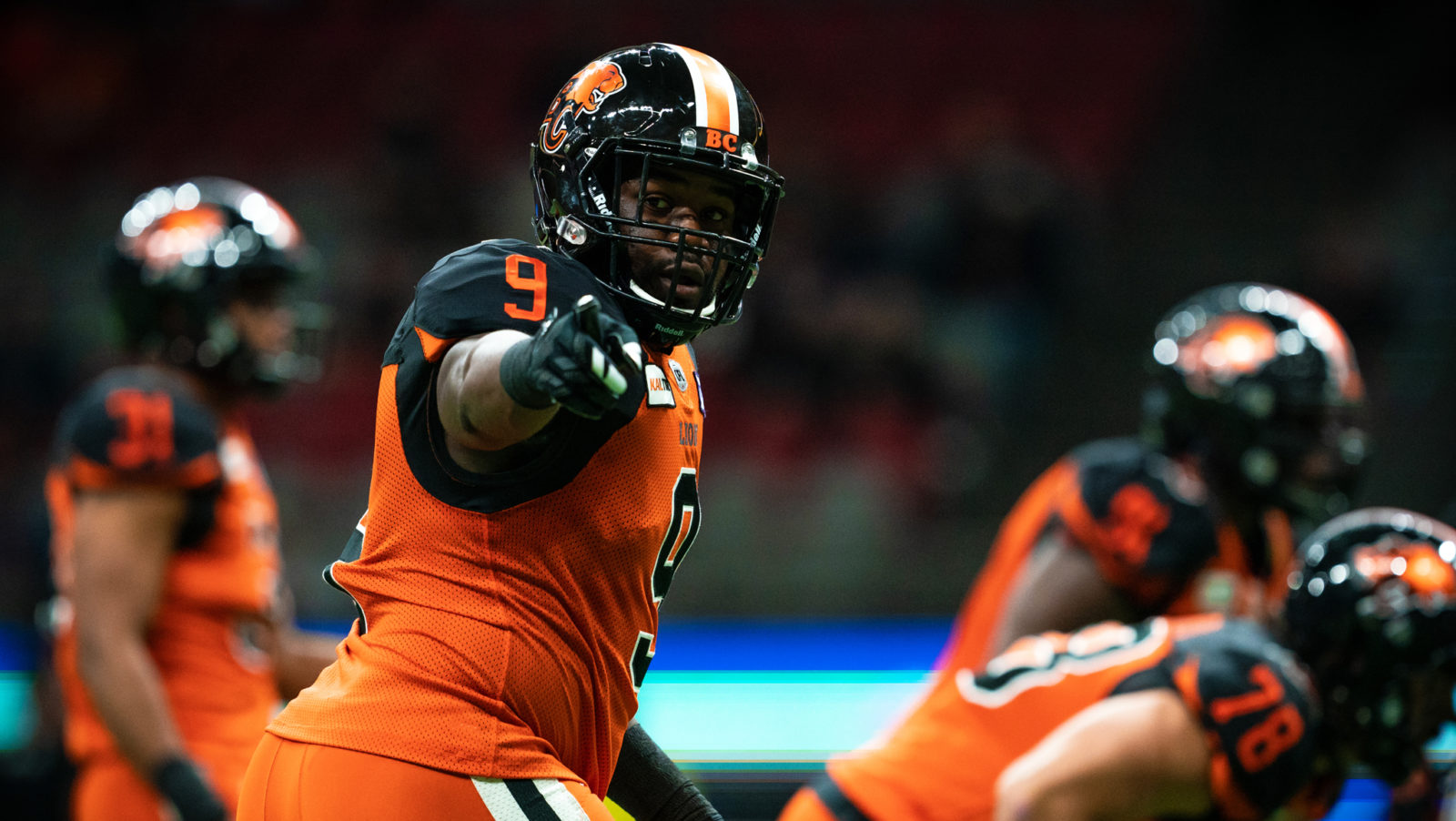 TORONTO — We’ve got one team picked across the board to come away with a win while two others have all but one individual on their side.

The Calgary Stampeders are the lone team this week to have a unanimous vote of confidence from the CFL.ca writers. In the early Sunday matchup, four of the six selected the Winnipeg Blue Bombers to pull out the victory over the Montreal Alouettes on the road.

Hamilton received five votes to win, with Pat Steinberg being the lone individual to be in the Edmonton Eskimos’ corner. The same goes for the final game of the week, where Jamie Nye is going with the Ottawa REDBLACKS to topple the BC Lions at TD Place.

Here are the picks for Week 15.

RELATED
» Weekly Predictor: REDBLACKS with the edge in the rematch?
» Total CFL Pick ‘Em: Make your picks for Week 15!
» Be the GM in TSN CFL Fantasy presented by LeoVegas
» The DailyRoto 2019 Fantasy Guide 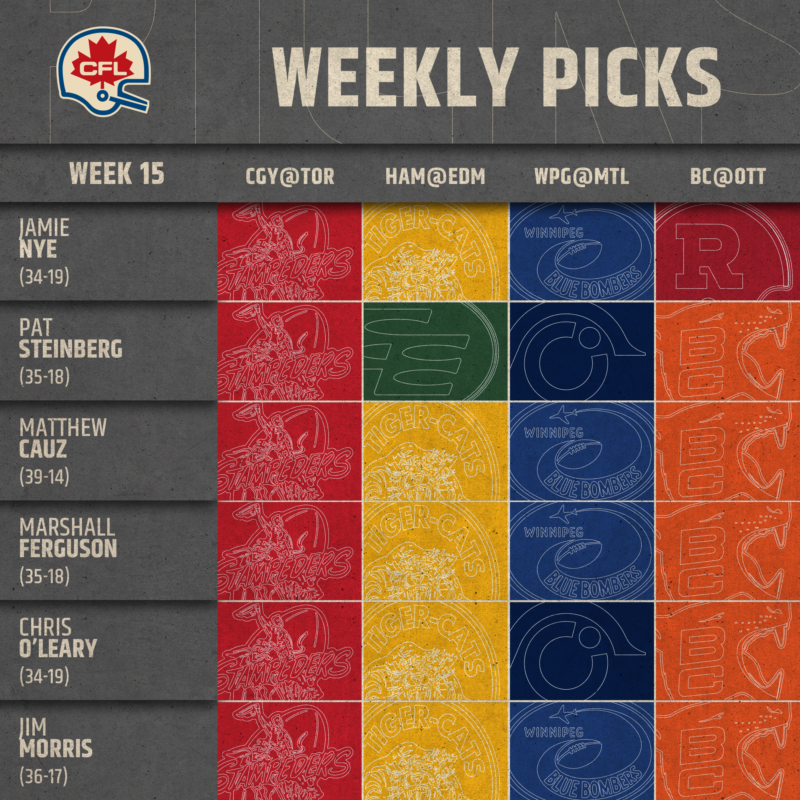 In the opening matchup of the week, we’ll get a Calgary Stampeders squad looking for their fourth straight win when they invade BMO Field to face the Toronto Argonauts.

Bo Levi Mitchell comes into this game off of three straight solid performances since returning from injury. In the Stamps’ last game against Hamilton, he completed 60 percent of his tosses for 342 yards and a touchdown. Eric Rogers had a season-high 129 yards and a touchdown on eight grabs and Reggie Begelton had 108 yards of his own on six catches.

Toronto is coming in off the bye week, but in their previous game in Week 13, they crushed Ottawa in front of their home faithful. James Wilder Jr. had his breakout performance of 2019, getting into the end zone three times in the second half — twice on receptions. McLeod Bethel-Thompson also tossed for 411 yards and three touchdowns in the win. He currently sits second in the league in passing yards and has gone for over 300 yards through the air in seven of the 11 games he’s appeared in.

Calgary is on a roll. In the first matchup between these two squads, the Stamps took the win at McMahon Stadium. We’ll see how the Argos’ defence stacks up against them now that Mitchell is back in the equation.

We’ll see a battle of the backups when the Hamilton Tiger-Cats take on the Edmonton Eskimos on Friday night.

Dane Evans took over under centre for the Tabbies back in Week 7 when starter Jeremiah Masoli suffered a season-ending ACL injury against Winnipeg. He’ll face Logan Kilgore this week. The Esks’ backup came in to relieve Trevor Harris in Week 13 after he sustained an upper-body injury against Calgary.

Evans has posted 1,951 yards and eight touchdowns over his eight appearances last season. He’s got a pair of big-time targets in Brandon Banks and Bralon Addison. The former continues to be one of the biggest offensive threats in the league while the latter is having a breakout sophomore CFL campaign.

Kilgore came in during the first half in Week 13 and went 21 of 28 for 242 yards while throwing one interception. With a bye week to prepare for his first start of the campaign, he should fare even better than his last performance. He won’t be short on weapons, as C.J. Gable and the entire Esks receiving core is healthy for this matchup. Look for him to get DaVaris Daniels, Ricky Collins Jr. and Greg Ellingson involved early.

These two teams will get well acquainted over the course of the next three weeks. They’ll meet up again at Tim Hortons Field in Week 17. With the victory, Hamilton will officially lock up a playoff spot, so expect them to come out with a lot of intensity in this game.

The third game of the week sees the West-best Winnipeg Blue Bombers travel East for a showdown with the Montreal Alouettes.

This will be the first head-to-head of the year between the two inter-divisional foes. They’ll meet up again at IG Field in Week 18.

During this current run of solid play, Vernon Adams Jr. has been fantastic. The pivot has thrown for 1,318 yards and six majors over the last four games. William Stanback has also returned to the lineup with a vengeance, rumbling for 135 yards and a touchdown over his last two outings. The receiving group — featuring Eugene Lewis, DeVier Posey, Quan Bray and Chris Matthews — poses matchup nightmares for opposing secondaries.

For Winnipeg, they’ll see star running back Andrew Harris return following a two-game suspension. The 32-year-old is having an MOP-calibre campaign, racking up 908 rushing yards and three touchdowns on 141 carries. Chris Streveler had his best start of the season in Week 13 against Saskatchewan, throwing for 186 yards and a pair of touchdowns while adding another two scores with his legs.

This is a crucial game for the Bombers, who are looking in the rearview as both Calgary and Saskatchewan get closer to the top spot with every passing week. Despite their 6-5 record, the Als are no picnic to play against, especially in the friendly confines of Percival Molson Memorial Stadium.

Despite the REDBLACKS dropping nine of their last 10 games, they still have one believer in the form of Jamie Nye, who was the only writer to go with Ottawa in this matchup — it’s worked out well in the past for O’Leary, so let’s see what happens.

Ottawa and BC will go head-to-head for the second consecutive week. In their last game at BC Place in Week 14, the Leos cruised to a 29-5 victory.

The red and black are trying to find their way while attempting to figure out who will be the man under centre going forward. Dominique Davis and Jonathon Jennings have alternated snaps throughout the season but neither individual has been able to make a case to be the unquestioned starter. Jennings started in Wek 14 and had 239 yards through the air while tossing a pair of interceptions.

BC was able to protect quarterback Mike Reilly efficiently in Week 14, as the Ottawa defence didn’t get to him once. Reilly took that effort and completed 69 percent of his passes for 286 yards and a pair of touchdowns while also scoring two rushing scores. Bryan Burnham finished with nine catches and 97 yards while Lemar Durant had 87 yards on four receptions. The Lions’ defence also came out with a pair of interceptions in four sacks against the REDBLACKS.

With Toronto looking stronger over the last handful of games, Ottawa needs to come out of Week 15 with a positive result. It won’t be easy but their home faithful should give them some extra confidence.