Lions roll over REDBLACKS for biggest win of season 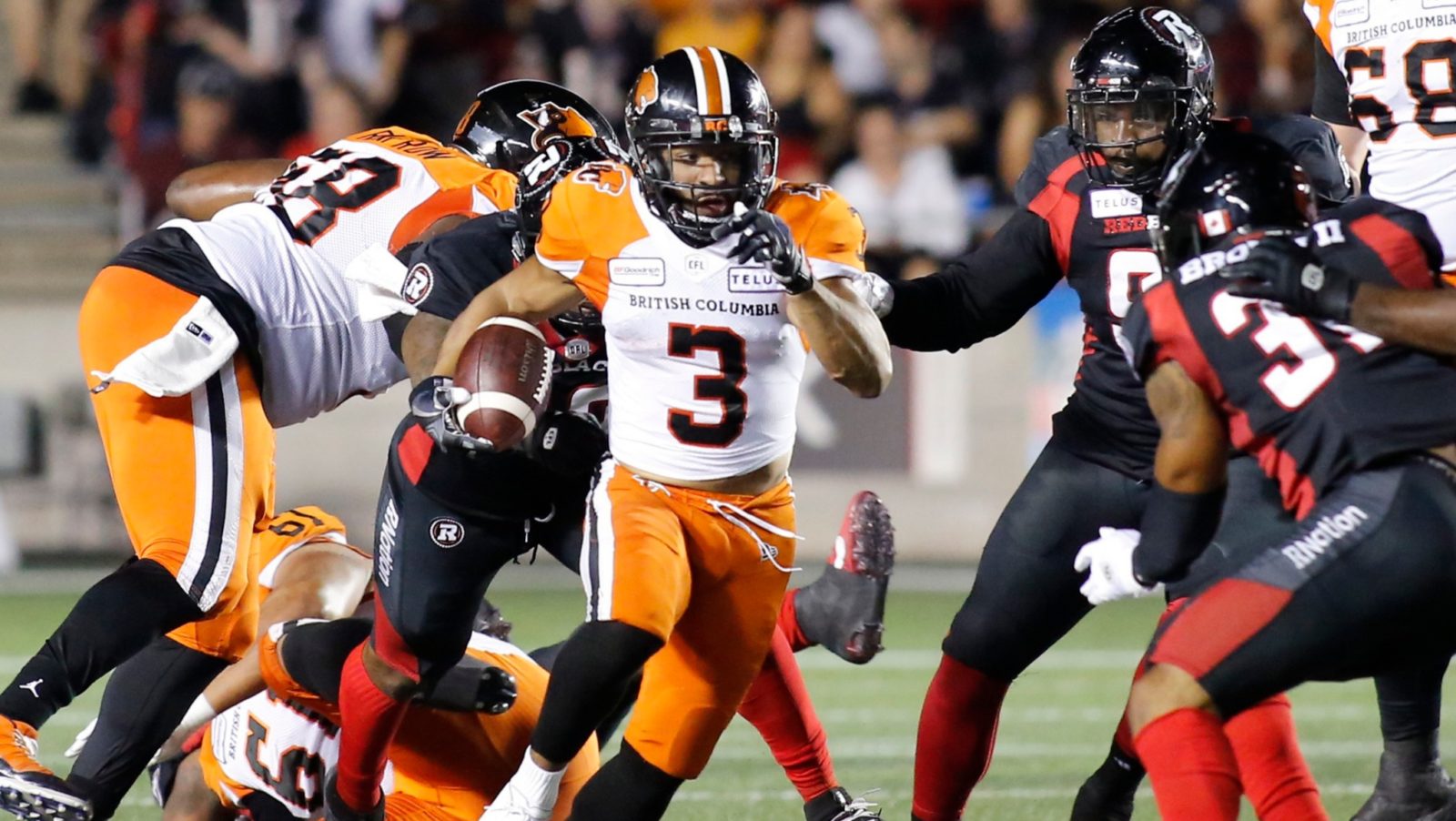 Lions roll over REDBLACKS for biggest win of season

OTTAWA — A dominant performance on both sides of the ball led the BC Lions to a 40-7 road win over the Ottawa REDBLACKS on Saturday night. The Lions improved their record to 3-10 after winning back-to-back games against Ottawa and scoring 40 points for the first time this season.

The Lions’ defence forced six consecutive two and outs while holding quarterback Jonathon Jennings to just 16 passing yards in the first half. Touchdowns from John White and Shaq Johnson combined with three field goals from Sergio Castillo to give the Lions a 25-point lead entering the fourth quarter, and the Lions extended their lead with a 14-yard touchdown pass from Mike Reilly to Bryan Burnham. Castillo added his fourth field goal to seal the victory.

Reilly passed for 353 yards while completing 78 per cent of his passes, and Johnson had his best CFL performance with 160 receiving yards on just three catches.

Burnham caught nine of his 12 targets for 135 yards, taking the league lead while surpassing 1,000 receiving yards for the fourth straight season.

RELATED:
» Images: Lions at REDBLACKS
» By the Numbers: View Boxscore
» Watch: Trick play has Carter air it out for the TD
» Watch: Reilly comes out firing after halftime

Ottawa took an early two-point lead after the Lions conceded a safety deep in their own end, but the Lions grabbed the lead after a big 43-yard pass from Reilly to Johnson led to a seven-yard touchdown run from White.

The Lions extended their lead in the second quarter on a gadget play that saw Duron Carter throw a perfect 67-yard touchdown pass to Johnson. Castillo kicked the extra point to put BC up 14-2.

The REDBLACKS came up with a solid play on defence when defensive back Chris Randle intercepted a pass intended for Lemar Durant, but the offence was unable to convert the turnover into points.

BC extended its lead to 15 points with a 28-yard field goal from Castillo late in the second quarter, and Castillo added an 18-yard field goal in the final seconds before half-time after BC forced another quick punt.

The Lions came roaring out of the gate to start the third quarter, as Reilly found Burnham deep down the field for a 55-yard gain just two plays into the first drive. Reilly followed up the big play with a 14-yard touchdown pass to Carter, and Castillo added the extra point to give the Lions a commanding 27-2 lead.

Ottawa moved into scoring range after receiver DeVonte Dedmon beat cornerback Crezdon Butler deep for a 41-yard gain, but Butler bounced back on the very next play to pick off Jennings and give the ball to the Lions.

The turnover led to Castillo’s third field goal of the game, and the 42-yard kick put BC up by 28 points with seven minutes to go in the third quarter.

Jennings found another big play through the air when he connected with receiver R.J. Harris for a 43-yard pickup, but the REDBLACKS opted to settle for a 28-yard field goal from Lewis Ward after the drive stalled.

William Arndt came in at quarterback for Ottawa near the end of the third, and the REDBLACKS added a point to their total after a missed field goal from Ward resulted in a single.

But the Lions held on to momentum when they extended their lead later in the fourth quarter. Reilly engineered a 60-yard drive that saw him cap it off with a 14-yard touchdown toss to Burnham, and Castillo added the extra point to put BC up 37-6.

The Lions extended their lead with a 28-yard field goal from Castillo, and the REDBLACKS added a point down the stretch after a 77-yard punt from Richie Leone resulted in a single.

Both teams will be in action again next Saturday in Week 16, with the Ottawa REDBLACKS hosting the Edmonton Eskimos before the BC Lions host the Montreal Alouettes.