We all have those friends that we can go months or even years without seeing and when you reunite, it’s like you just pick up where your conversation last left off without a hitch.

That’s how it felt watching Ricky Ray back in Edmonton on Friday night.

It’s been almost eight years since Ray was traded to Toronto, but watching him being paraded around in the Edmonton Eskimos’ coloured fire truck at Commonwealth Stadium, surrounded by some of his former teammates and most significantly back in an Esks’ jersey for the first time since that 2011 season ended, it all felt familiar and comfortable.

At the end of a 16-year career built on staying cool in high-stress situations, Ray finally cracked. He choked up at the words, at the sight of his name on the team’s Ring of Honour, up there with the names of the greatest to have ever played for a franchise that’s woven together with excellence.

Until this past week, Ray had never fully opened up about the hurt that came with being dealt away from Edmonton. He’d taken a  pay cut to stay with the Esks for that 2011 season. He led the team to the West Final that year and there was optimism that the team could be a tweak or two away from Grey Cup contention in 2012.

It turns out that Ray was on the road to another Grey Cup. He just didn’t see it taking him East to Toronto.

“I was shocked,” Ray later said in the TSN booth, joining Dustin Nielsen and Glen Suitor. “I was really mad that whole year. I wanted to be in Edmonton.”

Ray said that it wasn’t until his Argos beat the Esks in the 2012 playoffs — Edmonton crossed over that year and played at Rogers Centre in the East Semi-Final — that he was able to put the trade behind him and start to come to terms with his new football life in Toronto.

If you paid attention to his play in that game, you could see how much it meant to him. In the Argos’ 31-point second quarter, Ray ran a touchdown in, jumped in the air and spiked the ball between his legs.

In the grand scheme of grandiose football celebrations, a spike between the legs doesn’t register. When Ray did it, it became something that his teammates and coaches would talk about years later.

Jordan Younger, now an assistant coach with the Winnipeg Blue Bombers, played defensive back for those 2012 Argos. When Ray announced his retirement, Younger told me that the spike was the moment that Ray fully became a Toronto Argonaut.

“It’s the (touchdown) run more than anything,” Mike O’Shea said earlier this year of the play. “He was fired up and I think that was an important time right there. I think guys always understood how important it was to him and they just enjoyed that moment. I think it had some lasting effect.” 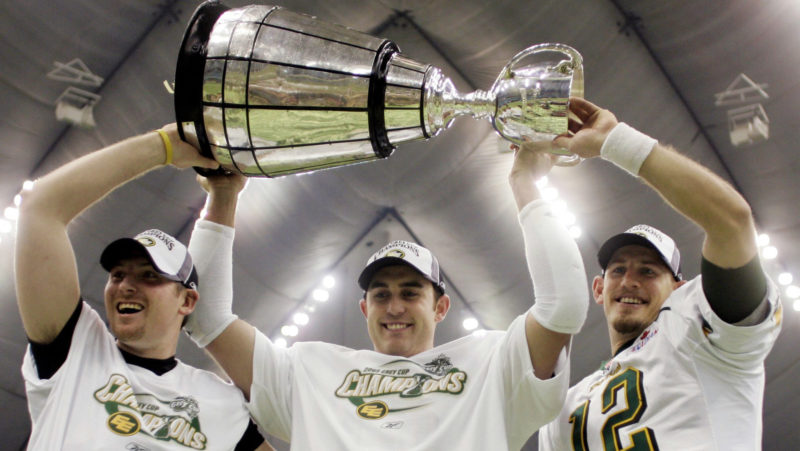 While Ray enjoyed his time in Toronto, winning two Grey Cups in seven years with the Argos, a connection to Edmonton was always there. It came fully back to the surface in Edmonton on Friday.

While sitting in the booth, still wearing his green No. 15 jersey, Ray reacted as the game started to turn in Edmonton’s favour.

“We needed that,” he said as the Esks forced a turnover. When Logan Kilgore — who ironically enough wears Ray’s No. 15 this year in Edmonton after serving as his backup in Toronto in 2016 — threw a 32-yard touchdown to Greg Ellingson, Ray used ‘we’ again.

Ray was masterful on the field, quietly building a legacy as one of the best to ever play the position in the CFL. He was also masterful at rarely showing emotion, whether it was celebrating the highs or the lows of the game. Standing on the field where it all began for him in 2002, he finally put the poker face away. It was a night that was eight years in the making and at the same time, it felt comfortable and familiar, like Ray had never left.