Week 5 gave us a few pieces (and a lot more questions) of U SPORTS football’s 2019 jigsaw puzzle.

At Alberta, it’s clear the Bears (3-1) are a force to be taken seriously after a final-minute field goal helped them down ranked Saskatchewan (2-2) in Edmonton.

Defensive coordinator Greg Knox (ex-McMaster HC) has helped U. of A. become a team that can win games on defence — and possibly threaten come the Canada West playoffs for the first time in a decade.

In Ontario, the Queen’s Gaels kept their season alive with a rollercoaster 37-33 win at No. 10 Toronto.

Former Western OC Steve Snyder’s had a challenging start to his Gaels tenure, and while a playoff berth may be too large an ask for a 2-3 team with Guelph and a resurgent Laurier still to come, it’s a big win nonetheless.

As somebody that was in attendance at Varsity Stadium on Saturday, a quick word on the atmosphere: It was fantastic. 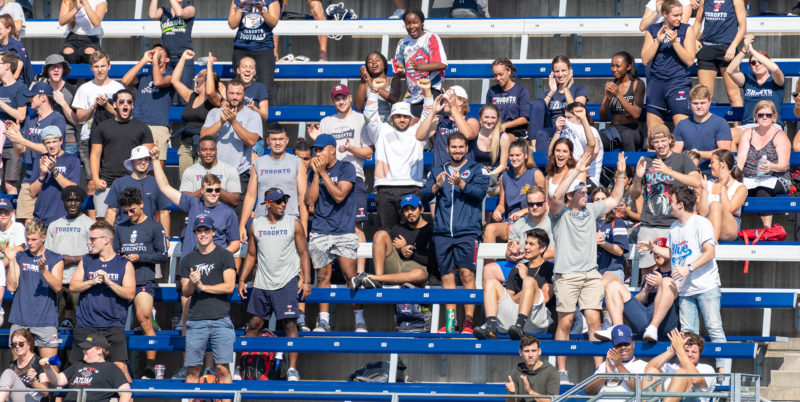 A raucous crowd of 2,500-plus made for a great atmosphere at Toronto’s Varsity Stadium. (Henry Zhao/University of Toronto)

Whether it was the Blues’ cheer and in-game hype team getting the crowd of 2,500-plus riled up, or the Queen’s band (love ’em or hate ’em) and its friendly chirps, it felt like a university football game. Kudos to all involved.

In Quebec, ranked Laval fell behind McGill and was level at halftime before pulling away for a 37-17 victory.

RSEQ’s basement battle saw Concordia edge Sherbrooke in a wild contest that went down to the wire.

After Sherbrooke erased a 19-point deficit and took the lead with seconds on the clock, the offence set up rookie Bradley James Santos for the biggest kick of his life.

Relive the final moments of today’s dramatic Homecoming victory over the Vert & Or. #CUstingers #CUfootball pic.twitter.com/fjqdOxZvs3

Buckle up: Sherbrooke, McGill and Concordia are now all tied at 1-3, and only two of the three can qualify for the right to face monumental challenges at Montreal and Laval in the playoffs.

In Atlantic Canada, the favoured teams pulled out wins as Acadia and Saint Mary’s beat Mt. Allison and St. FX respectively by one score.