Accuracy Grades: Who was on target in Week 15? 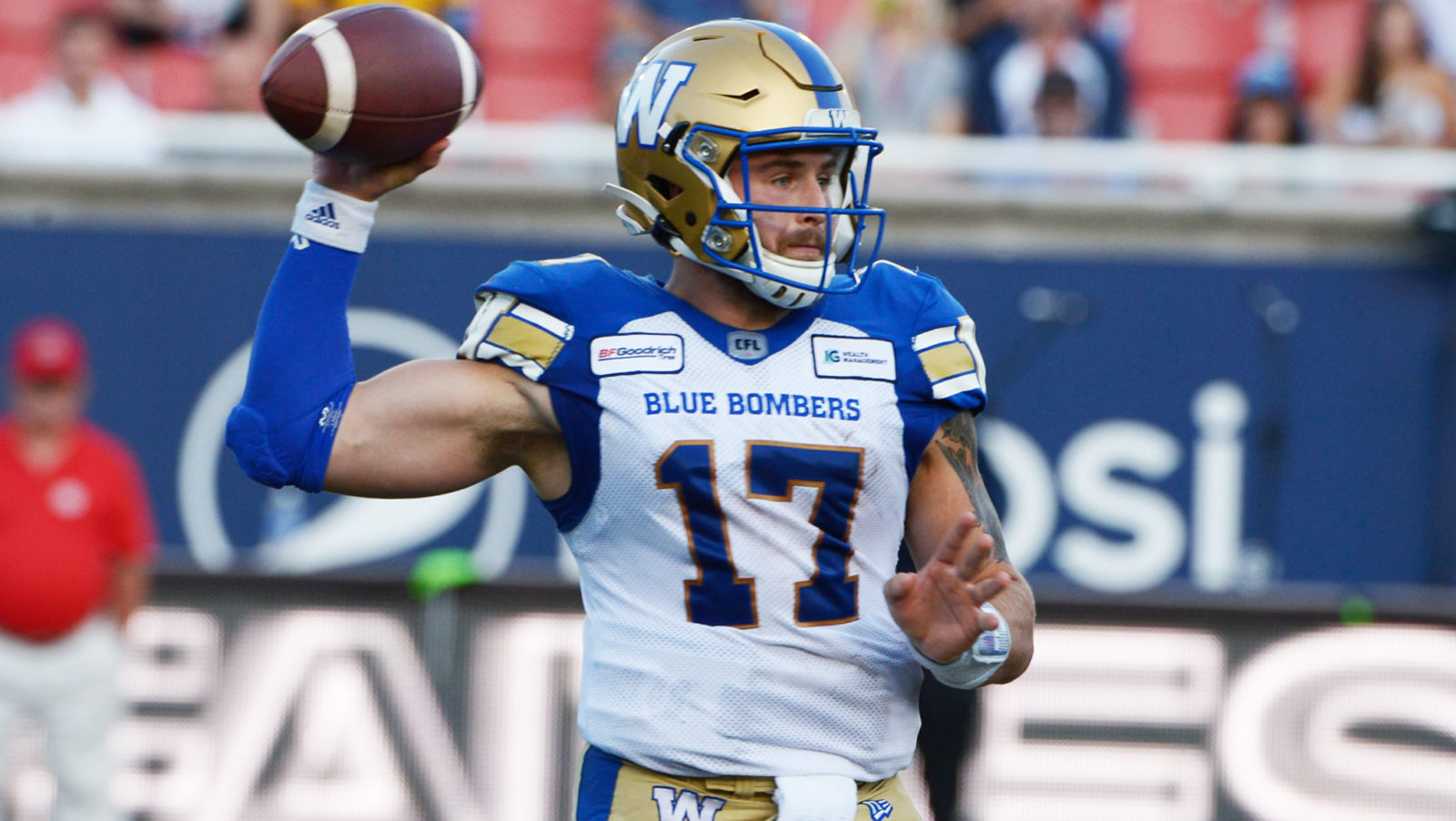 Accuracy Grades: Who was on target in Week 15?

Week 15 has come and gone with a couple of outstanding quarterback performances.

Let’s take a look at how the accuracy grades shook out for the most recent passing test.

Here’s the breakdown of Week 15 in the CFL: 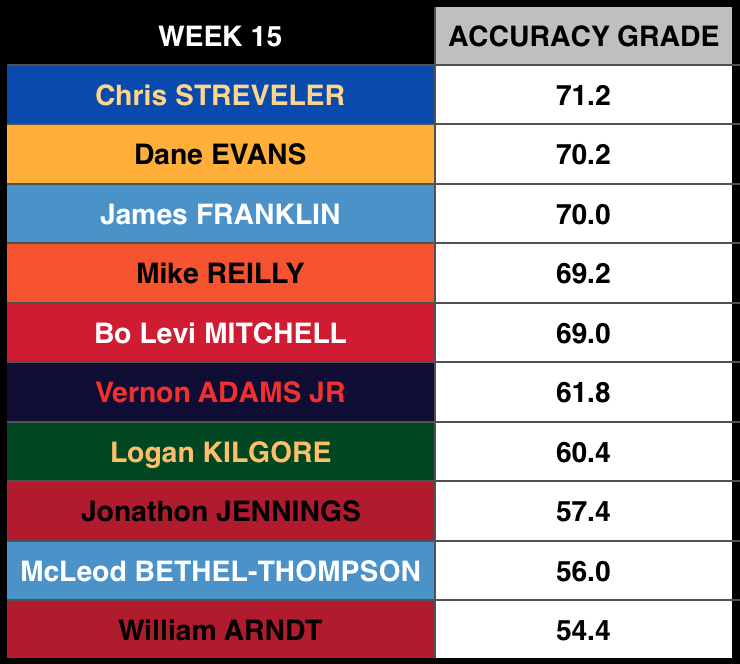 Thrown into a difficult situation with an understandably restless crowd, rookie William Arndt brings up the back of the field for Week 15. With the way things are trending in Ottawa I don’t see how Arndt doesn’t get a start to show us and the REDBLACKS what he can really do moving forward as the team has to be wondering who their quarterback of the future is.

McLeod Bethel-Thompson – baring injury to James Franklin – might have taken his last double blue snaps of 2019 in Week 15. MacBeth sits third in CFL passing yardage, which should be reason enough to keep him in the starting role but the winds of change appear to have once again swept over the Argos sails.

Jonathon Jennings was up and down again this week against his old team. The back-to-back against BC was not kind to Jennings, who dropped his overall season grade both weeks after being the most accurate passer in all of Week 13.

Logan Kilgore put up an admirable fight against a tough Ticats pass rush Friday at home but his tendency to leave balls short and inside hurt his grade and should have resulted in more than the three interceptions he threw.

Despite getting the stunning win and a Shaw CFL Top Performer nod, Vernon Adams Jr.’s sporadic play continues to keep him in the lower half of the 2019 accuracy grades. For every off throw that is put in a dangerous or uncatchable spot, Adams Jr. has found a way to make a great throw but his grades continue to be – by far – the most volatile of any CFL quarterback in 2019.

Bo Levi is back, and in a visor! Bo made light work of the Argos on Friday night in Toronto completing 33 of his 48 attempts on route to reaching his highest accuracy grade for a single game so far in 2019 (69.0). A number that easily would put him amongst the top three for Week 15, if it weren’t for a couple quarterbacks with less downfield aggression and fewer throws.

Mike Reilly has won back-to-back games and don’t look now but the Lions passing attack is suddenly alive. While it might be too little too late there is no questioning how much fun it is to see Reilly upright and throwing strikes more often since Kelly Bates was hired to run the offensive line in Vancouver.

Now a look at the top three and their target graphs. 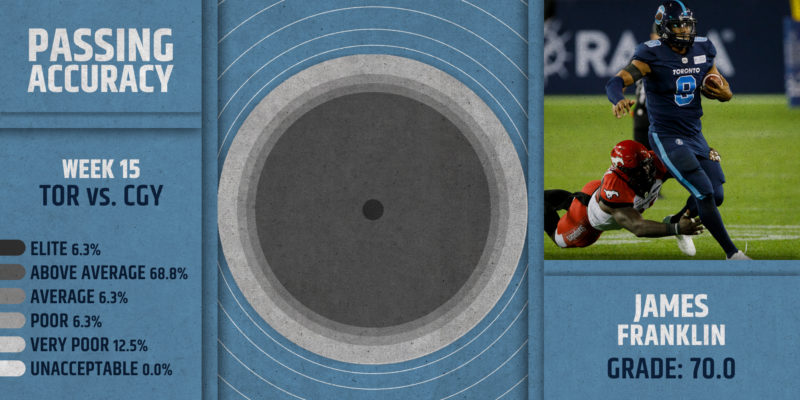 For James Franklin, Week 15 consisted of just 16 throws in relief duty for McLeod Bethel-Thompson but he dropped a couple absolute dimes including a corner ball to his left and a shot between levels of the defence perfectly place to Armanti Edwards, who seems to have a more natural chemistry with Franklin than any other Argos passer. 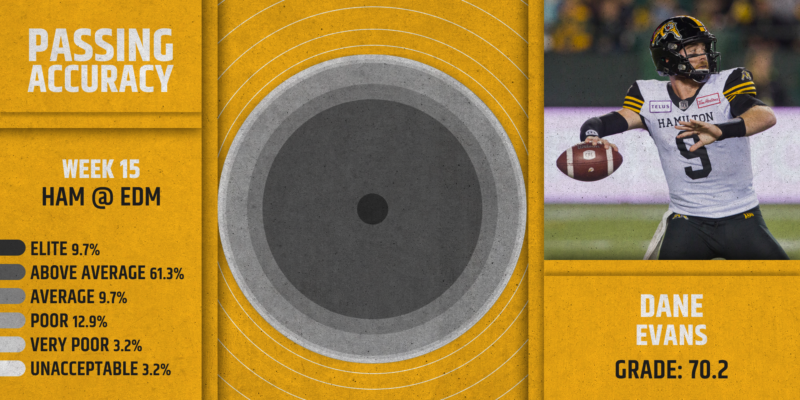 Dane Evans will always remember the win in Edmonton for his heroic hold on Lirim Hajrullahu’s 34-yard game winning field goal but he should be proud of the overall effort he gave last week. Aside from three touchdown bombs in the first quarter, Evans sprinkled in some dandy dimes in the third quarter and saved his best for last on his final throw of the night to Bralon Addison. 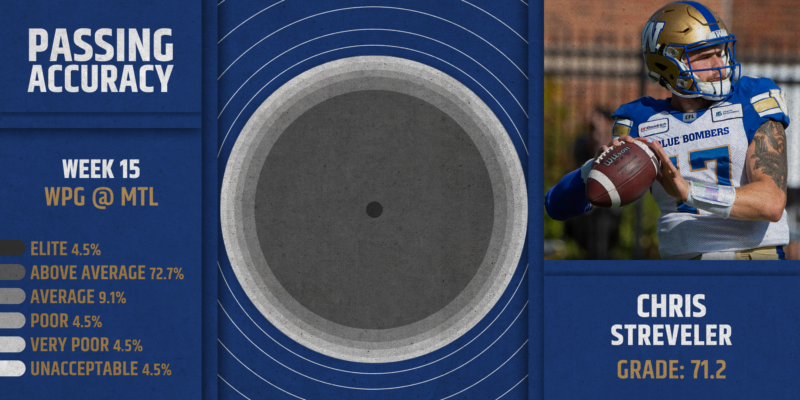 He did it. The guy who runs like a horse threw like a king Saturday in Montreal. Despite the end result, Streveler reached his best accuracy mark of 2019 while completing more than 75 per cent of his passes with above average or elite accuracy.

Here are the up to date season standings: 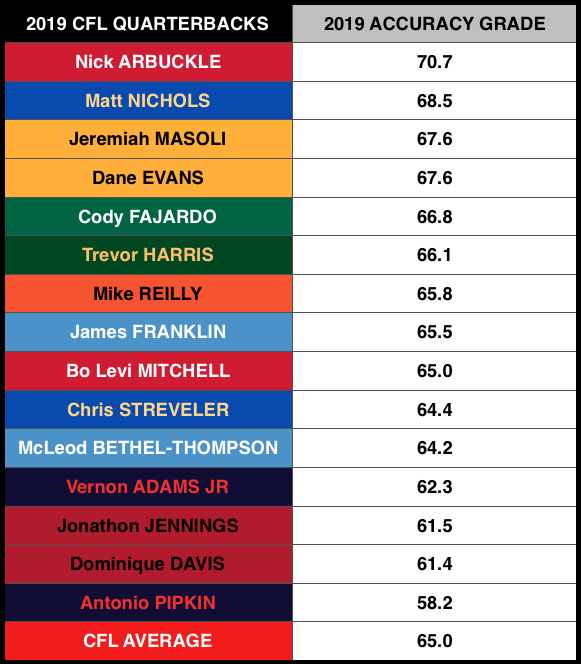 The only change to speak of this week sees James Franklin leapfrog his fellow Argo QB, Bo Levi Mitchell and Chris Streveler while Streveler also bounced up the standings one spot. It’s hard to imagine anyone other than Cody Fajardo or Mike Reilly having a chance to catch Nick Arbuckle at this point unless Bo Levi can go on a historic run down the stretch.

This week sees the first and second most accurate quarterbacks face-off in Winnipeg on Friday night before James Franklin and Cody Fajardo duel in their attempt to take home the week’s top spot. It should be some great games with playoff implications looming for many teams relying on a quarterback they never thought they’d have to this late in the season.