Grossman: Setback not the end of football dreams for high school student

Grossman: Setback not the end of football dreams for high school student

Kayla Fernando remembers the piercing knockdown followed by a hollow feeling inside her.

While she was trying out for the flag football team, the blow was not physical nor did it have anything to do with a tackle, a miscue or a turnover.

As a 13-year old, she was not accustomed to dealing with setbacks so soon in her life and her ivory gleaming smile suddenly disappeared. The winds of youth, and promise, had chilled.

The reason: Fernando was told that she wasn’t good enough to make her Calgary elementary school team.

For Fernando, what was to come later amounted to a glorious chance to turn disappointment into a vibrant success – and, that, she did.

While the memories still linger on with her, her high school triumphs and a jewel of alacrity also overshadow the tough times.

“Sure it was a serious letdown for me and at a time when I was excited about being active, trying to enjoy an opportunity to play for my school and also keep learning how to play (football),” recalled Fernando, who has a Pilipino background. “What happened forced me to work harder, and I used it as a learning experience.”

Fernando was living in Calgary, with her family, and attended St. Martha Catholic School where she also played basketball, and was one of the top scorers on the squad. 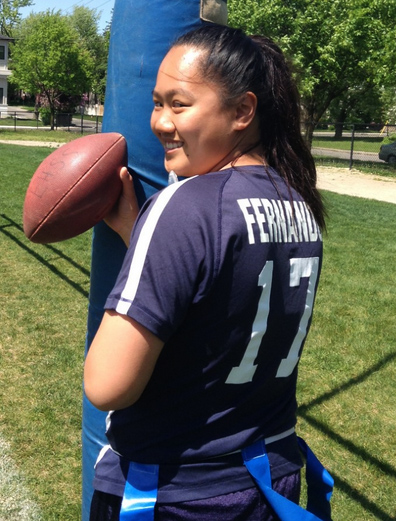 When Randy Chevrier, a former three-time Grey Cup champion with the Calgary Stampeders, was invited to speak to students at St. Patrick elementary school, Fernando took in the session, listened and was inspired by his comments about playing and teamwork.

“We threw a football around in the gym and found it to be a lot of fun,” she recalled. “I know I wasn’t good at throwing (the football) back then – but I had to start somewhere.”

When her father’s employment resulted in a return to Toronto, Fernando, with a new look on life, registered for Grade 8 at Cummer Valley Middle School. She quickly learned that no flag football team existed, despite attempts to get students interested.

Things changed when she signed up for Earl Haig Secondary School.

“It had bothered me because I wanted to learn, become a good player and didn’t want to fail myself,” said Fernando. “The next year, when I went to Earl Haig, I made the team as a linebacker.

“We didn’t make the playoffs, but what mattered to me was that I was contributing and learning. Teachers and coaches were very supportive. My self-confidence shot up like a bolt and I was tempted to let the coach, who cut me, know how well I was playing now.”

It turns out that Fernando was wise, so she stuck with the upper hand, and focused on the future.

In Grade 10, she won Earl Haig’s award as the most physically fit female in her grade, and was highlighted for Most Improved Player on the team. She was also nominated for Athlete of the Year.

There were also academic honors in the classroom. In Grade 11, she was a flag football team captain who started as a quarterback, and helped her squad make the Toronto District School Board playoffs.

To top it off, the school recognized her efforts with the Most Valuable Player award. It was an emotional moment for the 17-year old – one that had ecstasy mixed with shock, tears, exuberance, and that special smile returned.

“Every once in a while, I think about what happened (in Calgary) and I get a bitter taste,” added Fernando. “I could have quit, but I’m a better person and leader. Now, I am older, learned a great deal, am successful, and turn to the younger players on the team, share my story, and encourage them to keep trying and good things do happen.”

Earl Haig teacher and coach Derek Sherman didn’t know much of her past, but is thrilled Fernando is on the school team.

“You can see the ability, the look of success and, clearly, she is a leader,” said Sherman who acknowledged that Fernando, this past year, benefitted from a session with Damon Allen, a legend and member of the Canadian Football Hall of Fame.

Often walking to school in the fall with a football and her books, Fernando is thinking ahead – about many things that include her volunteer time commitments at a local senior citizens home. Also, her big plan is to pursue a career in law at a university – and hoping that it has a flag football team.