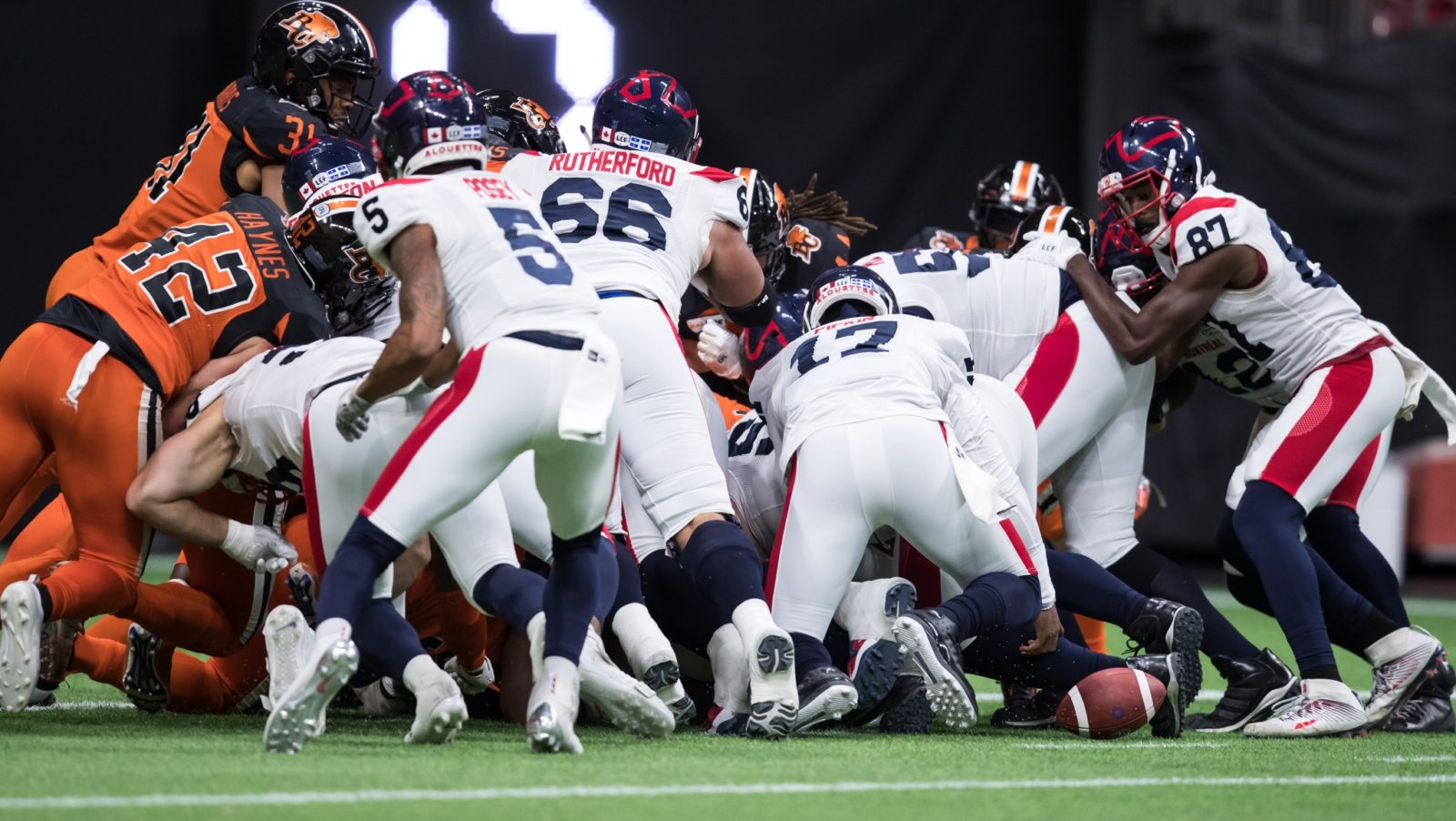 Montreal Alouettes quarterback Antonio Pipkin (17) fumbles the ball, which was picked up by Eugene Lewis (87), who was stopped by the B.C. Lions on the goal line on a third and goal, during the second half of a CFL football game in Vancouver, on Saturday September 28, 2019. (The Canadian Press)

VANCOUVER — One win and the Montreal Alouettes could have clinched a playoff spot for the first time since 2014.

Instead, head coach Khari Jones gambled from a few yards out, down by two, and just over a minute remaining in the game.

Antonio Pipkin, the Alouettes’ short-yardage quarterback went under centre, plunged forward as he received the snap, except for the fact that he never had the ball. Instead, the ball fell to his feet.

An attempt by Eugene Lewis to scoop up the loose ball and dive for the end zone came up unsuccessful as the ball was turned over on downs, and Mike Reilly and the Lions offence ran out the clock, further extending their hopes of making the playoffs despite their now 4-10 record.

“I would have done that in any situation,” said Jones following his team’s 25-23 loss in Vancouver. “We were really good on our 3rd-and-1s to that point. With the time on the clock, to give a guy like Mike Reilly that kind of time with needing one point… thought that would be pretty tough too.”

Reilly ended up finishing the game with 309 yards passing, as well as completing 88 per cent of his passes. Certainly understanding why Jones elected to go for the major when reading Reilly’s post-game stat line.

Antonio Pipkin finished the game with four carries for 13 yards and a touchdown, all coming from short-yardage offensive packages. Unfortunately for Pipkin and the Als, that critical fumble made it all for not.

On the flip side, Lions’ head coach DeVone Claybrooks seemed to see it coming, but also understood the play call of his coaching counterpart.

“We knew what they were going to do. They’ve been characteristically doing sneaks right over the top. They had success on it all day. One sneak got eight yards on one. So you can totally understand the call, as well as the circumstances.”

While it may not have been a pretty way to win, according to Claybrooks, he’ll take it nonetheless.

“The defence, even though we couldn’t plug a boat on the run game and they had given up 250 yards, but they stopped them for the one-yard when it counted, so that’s all that matters.”

The Lions’ coach cited his team’s resilience, stating they made the play they needed to to make the difference in the ball game.

“Kudos to those guys and their resiliency, and their maturity of what we’re trying to develop in laying the foundation here,” said Claybrooks

While the Lions will live another day in their fight for a playoff spot as they sit at the bottom of the West Division, Claybrooks admits there’s plenty of things they’ll be needing to improve on in this coming week’s worth of practices.

The Lions will welcome the Toronto Argonauts next Saturday at BC Place. The Alouettes will get another chance at securing themselves a playoff berth next week against the Calgary Stampeders on Saturday as well.