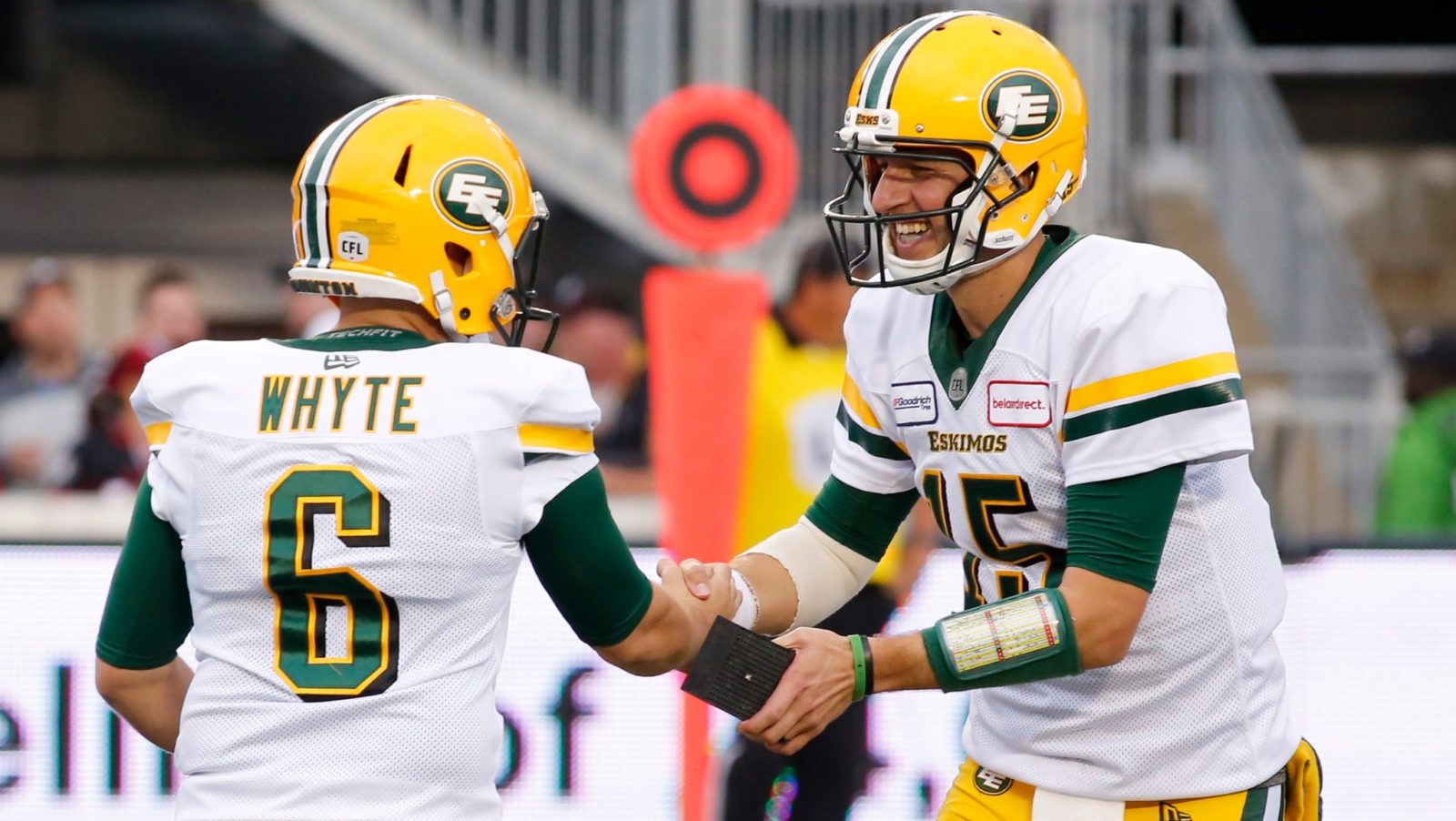 Hello, John Bowman. Every time you think you’re out, this game keeps pulling you back in. We keep hearing that this is definitely, surely, your last season of pro football. But after your first career interception – beauty that it was – are you certain of this? I continue to hold out hope that I can actually see a defensive lineman play at the age of 40 (50, anyone?) and you’re just the right candidate.

The Hamilton Ticats have been battling what has been at least a perceived lack of respect and maybe even a real one, this season.

There were decent reasons to hold off on pushing them to the top of the CFL heap for a good portion of this season, however.

For one, the Winnipeg Blue Bombers were looking the part for the first half of the year and the Ticats entered “gee, I dunno” territory after their franchise QB Jeremiah Masoli went down with a season-ending injury.

Friday night’s win over the Blue Bombers, though, showed us a team in command of itself, hitting the throttle at just the right time as September gives way to October.

Dane Evans has graduated from placeholder QB to pivot to be feared, that seems clear.

What happens when those two get back on the field? Even better things, you’d imagine.

No slight on the surging Calgary Stampeders, nor the rising Saskatchewan Roughriders here; they are nipping at Hamilton’s heels. And with a month to go, there’s time for team’s like the Blue Bombers, Eskimos and Alouettes to press the issue, if they can.

But right now, the ‘Cats are the CFL’s top dogs.

2. A REMINDER: HINDSIGHT IS… YOU KNOW

Montreal Alouettes’ Head Coach Khari Jones held fast to his guns in the wake of his team’s fumbling away a victory in B.C.

“I would have done that in any situation,” Jones said of his decision to go for it on 3rd and one from the Lions’ two-yard line, with a minute to go and his team trailing by two.

All those who said “this is a stupid call” before the ball was snapped, well, you get to pile on a bit due to the outcome.

Those of us who thought “I like this” don’t get to be revisionists, though.

The real takeaway from this? Don’t be predictable.

Said B.C. Head Coach Devone Claybrooks after the game: “We knew what they were going to do. They’ve been characteristically doing sneaks right over the top.”

The decision to go? Not a bad one, in my opinion.

3. A RETIRED PUNTER CAN TOP THE WEEK’S HIGHLIGHT REEL

You’ve never seen a ‘Ring of Honour’ induction like this!

Bob Cameron, you magnificent beast, you.

The former Winnipeg punter pulled off a very impressive core strength move on the night of his induction to the Blue Bombers’ Ring of Honour.

It was a thing of beauty. Incredible, unpredictable, insurmountable beauty.

He did a planche on the edge of the roof of the pick-up truck that was transporting him around the field at halftime. A planche!

Yeah, that’s right, a planche. I had to look it up to discover the name of the move, it was that freaking great; Elbows bent, balancing horizontally like some kind of punter-superman hybrid.

I immediately wondered if that was a move he invented and perfected years ago during an Acadia frat party or something, but that’d be another story.

What a moment. I quickly nabbed a screencap of it and gave the image a place of honour on the masthead of my Twitter page.

And, oh yeah, he’s 65. I’m ten years younger than he is and I audibly groan while pushing myself off the edge of the bed in the morning. That’s on mornings where I can actually push myself up from the bed.

Mostly I just roll off it onto the floor and slowly get to my feet as I crawl towards the bedroom door. Okay, maybe that says more about me than Bob Cameron, but still.

Up until Friday night, Cameron was simply the best (by far) into-the-teeth-of-the-wind punter I’ve ever seen. His performance during a gusty Grey Cup in 1988 remains as, probably, the top single-game punting display of my lifetime.

Now? Now he’s an aspirational legend; he set the bar, going forward, for all inducted player celebrations to come. And how did he set that bar? By BEING the bar. Come on.

I’m not saying Bob Cameron should be named a Shaw CFL Top Performer of the Week or anything but… wait a minute. Yes, I am. That’s exactly what I’m saying.

4. THERE’S NOTHING LIKE A REVIVAL OF A WELL-KNOWN SHOW

When I visited Toronto over the weekend, I noticed advertisements for a revival of the long-running Broadway smash “Cats.”

I saw no such advertisements for a revival of “The Manny Show,” but we got one, all the same, on Saturday night.

Manny Arceneaux’s first touchdown as a Saskatchewan Roughrider was a long time in coming, but it was a beauty, as the veteran receiver found his light and showed the Argos he can still exploit you deeply if you snooze just a bit, and you bank on his rehabbed knee not allowing him to be all he used to be.

When I saw that ad for “Cats” I thought: “Meh, do we really need that?” I had no such thoughts when I saw the revival of “The Manny Show,” though.

And judging by the number of Roughriders I spied on the Saskatchewan sideline doing their own versions of the Manny March when he scored, this is one revival that is being greeted enthusiastically.

5. EYES ON THE FUTURE, YOU TWO

The math is still there for the Toronto Argonauts and Ottawa REDBLACKS, both with faintly flickering playoff hopes, the flame doing its best to keep licking, despite the odds.

Realistically, though, the winds are howling and the rain is falling hard, so it’s time to turn attention to the hopes and dreams of 2020.

With the trade deadline coming up fast (October 9th), that means taking stock of the players that have market value to teams heading into the playoffs, and deciding whether they’re more valuable to you there, or as part of the promise of “there’s always next year.”

Ageing vets who’ve still got it can fetch a little something-something for teams that are in the post-season ditch.

Week 16 results, while not fatal, suggest strongly that both the REDBLACKS and Argos can stick a “SALE!” sign in their windows.

AND FINALLY… We need to keep alive, forever and ever, images of Brad Sinopoli and Greg Ellingson greeting each other before Saturday’s game between the REDBLACKS and Eskimos.

They smiled broadly, shoved each other playfully, and hugged it up happily prior to kick-off.

Move over, video of grown lions hugging the woman who raised them as cubs after they’d been reunited years later. So long, videos of babies delightfully reacting after seeing clearly for the first time when mama puts a pair of wee glasses on them.

You’ve got company in the feel-good meme game now. The buds. Being buds in a “been too long, bud” way.

GIF that sucker up, somebody.