Accuracy Grades: Who was on target in Week 16? 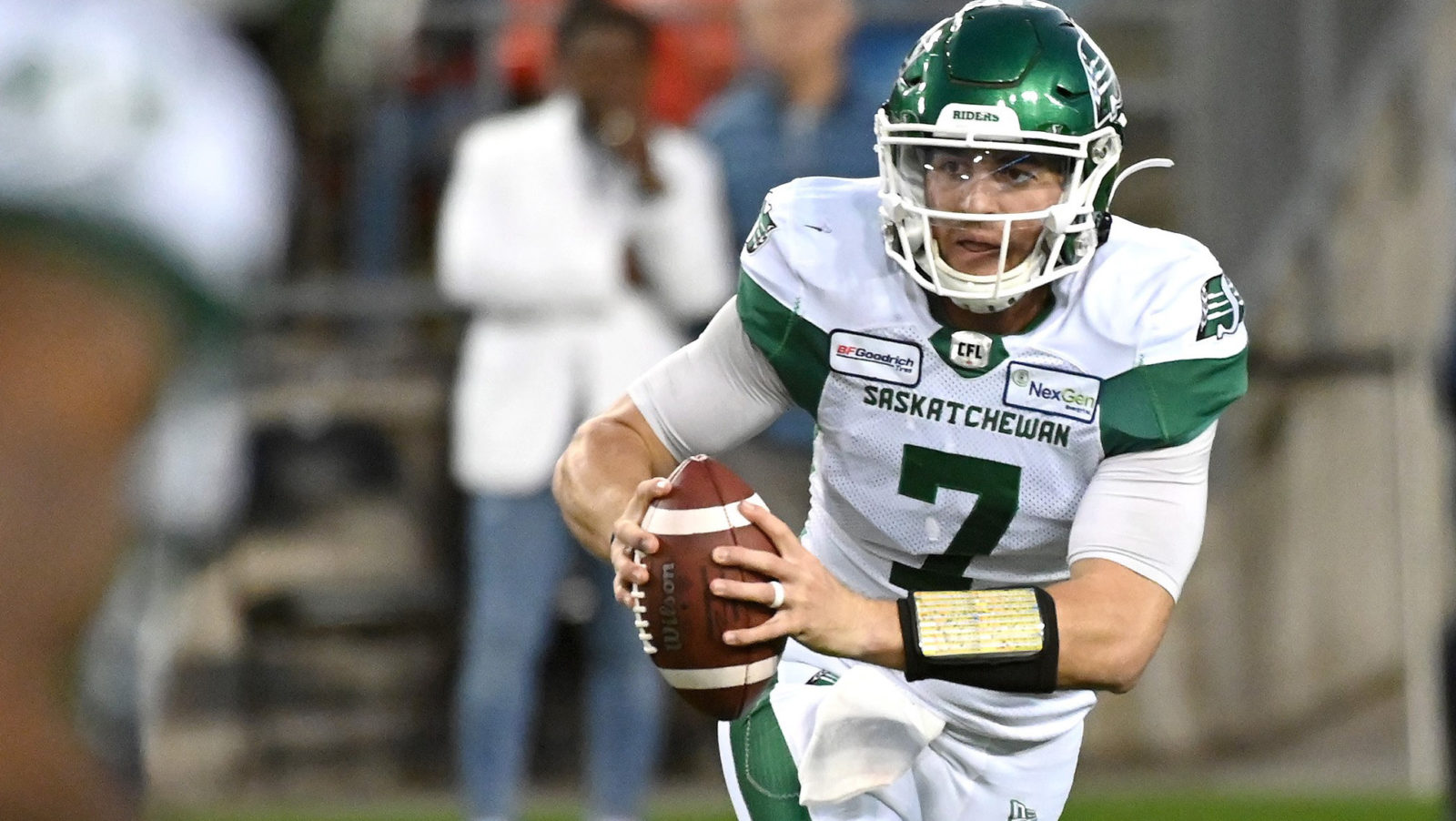 Accuracy Grades: Who was on target in Week 16?

Week 16 is in the books featuring another plethora of unique performances and situations for CFL passers.

Let’s look at how this week’s four games shook out for quarterback accuracy: 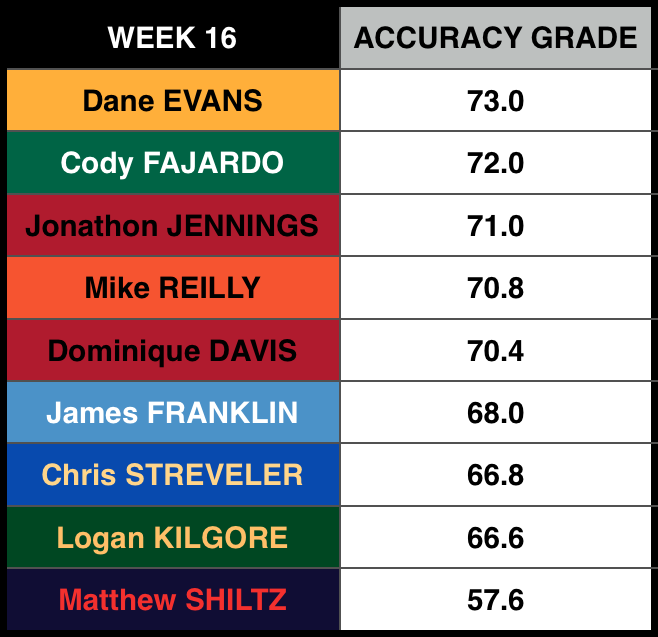 Pushed into duty, Matthew Shiltz did a nice job for the Montreal Alouettes in place of Vernon Adams Jr. but the accuracy just wasn’t there and as a result he placed last for Week 16.

Just ahead of Shiltz was Edmonton Eskimos QB Logan Kilgore, whose 66.6 grade is actually his best thus far in two true starts and a relief effort. That 66.6 grade is actually above Trevor Harris’ season mark set before he fell to injury but Kilgore still remains 2.3 grade points behind Harris in the season standings.

Chris Streveler and the Winnipeg Blue Bombers did not have the matchup with Hamilton go the way their offence would have liked, specifically on first down. Minimal early possession production led to Streveler being forced into tough down and distance throws repeatedly. That situation does the exact opposite of shining light on his unique skill set resulting in a low accuracy grade.

James Franklin got his chance – again – in Toronto and didn’t do much with it. The stat line was average, the accuracy grade – while above league average – was below the Week 16 median.

In Ottawa, Dominique Davis returned to the lineup – albeit not in the starter’s role – and played the majority of reps for Ottawa but his cross body decisions and long winding mechanics led to a variety of off target throws while Mike Reilly and the BC Lions won yet again. Reilly posting a 70.8 grade in Week 16, just 0.2 off the podium. 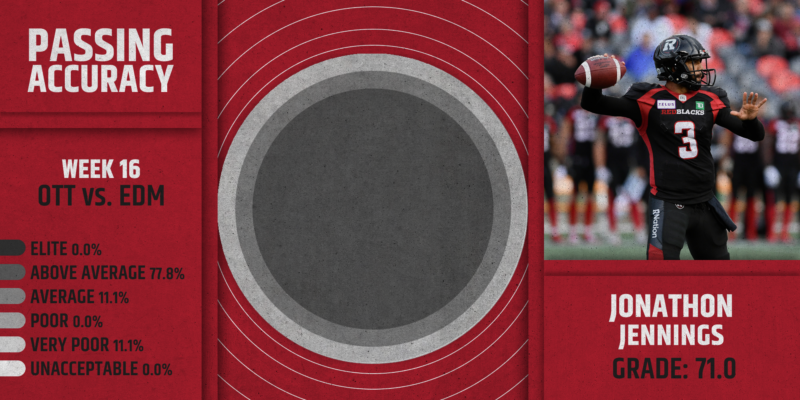 It’s a small sample size thanks to his limited usage in the game but Jennings qualified on the throws he was allowed to make for the top three this week. The problem in Ottawa isn’t single game performance as Jennings and Davis have both had their moments. Instead, it consistency and design. The REDBLACKS need to find something to celebrate over the next month at quarterback in order to give some semblance of hope for 2019 if either returns next season.

I wouldn’t hate grading out a game of Brad Sinopoli at quarterback… Just saying. 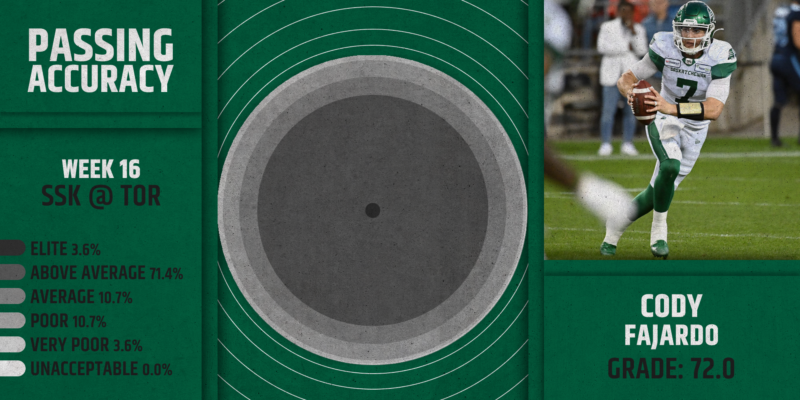 Fajardo and the Riders went into Toronto and made what appeared to be by the end of the evening right work of the Argos.

Fajardo made all the throws required and while not his best performance, he has shown a consistent quality of play with some great pocket escaping maneuvers that should have Riders fans wide awake come playoff time. 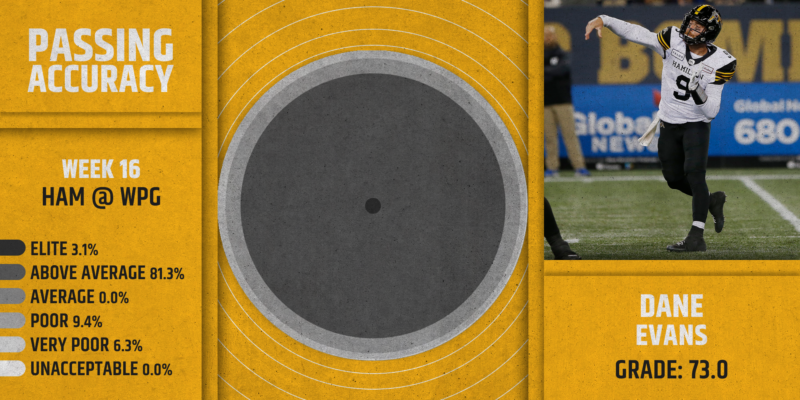 He did it again. For the second time in as many weeks, Evans went on the road to the West and came home with a victory while shredding an opposing defence early for home run shots. At halftime Evans had missed only four passes including two that were completely under his control to correct.

He had 308 first half passing yards and is beginning to make the type of throws as his in game rhythm improves that will only allow Hamilton’s offence to pick up more steam as the regular season comes to a close with four home games and a single road date in Montreal.

Now for a look at the overall 2019 season standings. 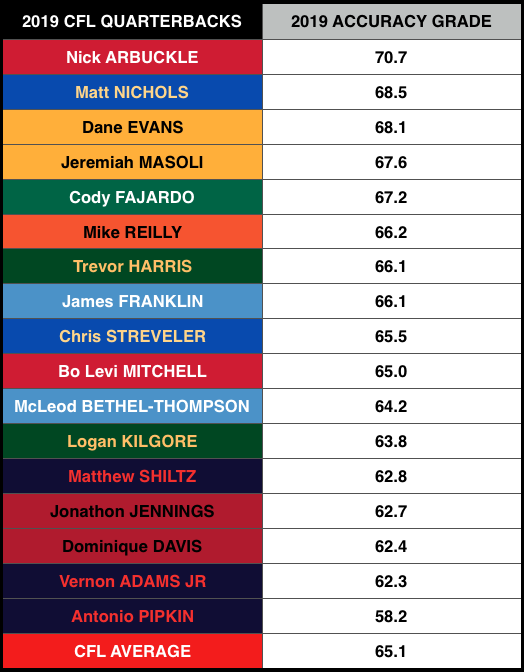 I can’t believe it, but we finally had some movement this week! Dane Evans overtook third in the season standings from teammate Jeremiah Masoli while Mike Reilly hopped from seventh into sixth by passing injured and idle Esks QB Trevor Harris.

Six of the bottom seven accuracy grades in 2019 belong to East Division quarterbacks. Logan Kilgore is still getting his feet wet with the Edmonton offence and is the only West passer to grade the bottom half of the season standings.

Week 17 features the return of Bo Levi Mitchell from a bye week and Vernon Adams Jr. from a one game suspension while Bombers QB Chris Streveler will try to rediscover his Banjo Bowl touch in a matchup with Cody Fajardo. Back next week with the updated grades!