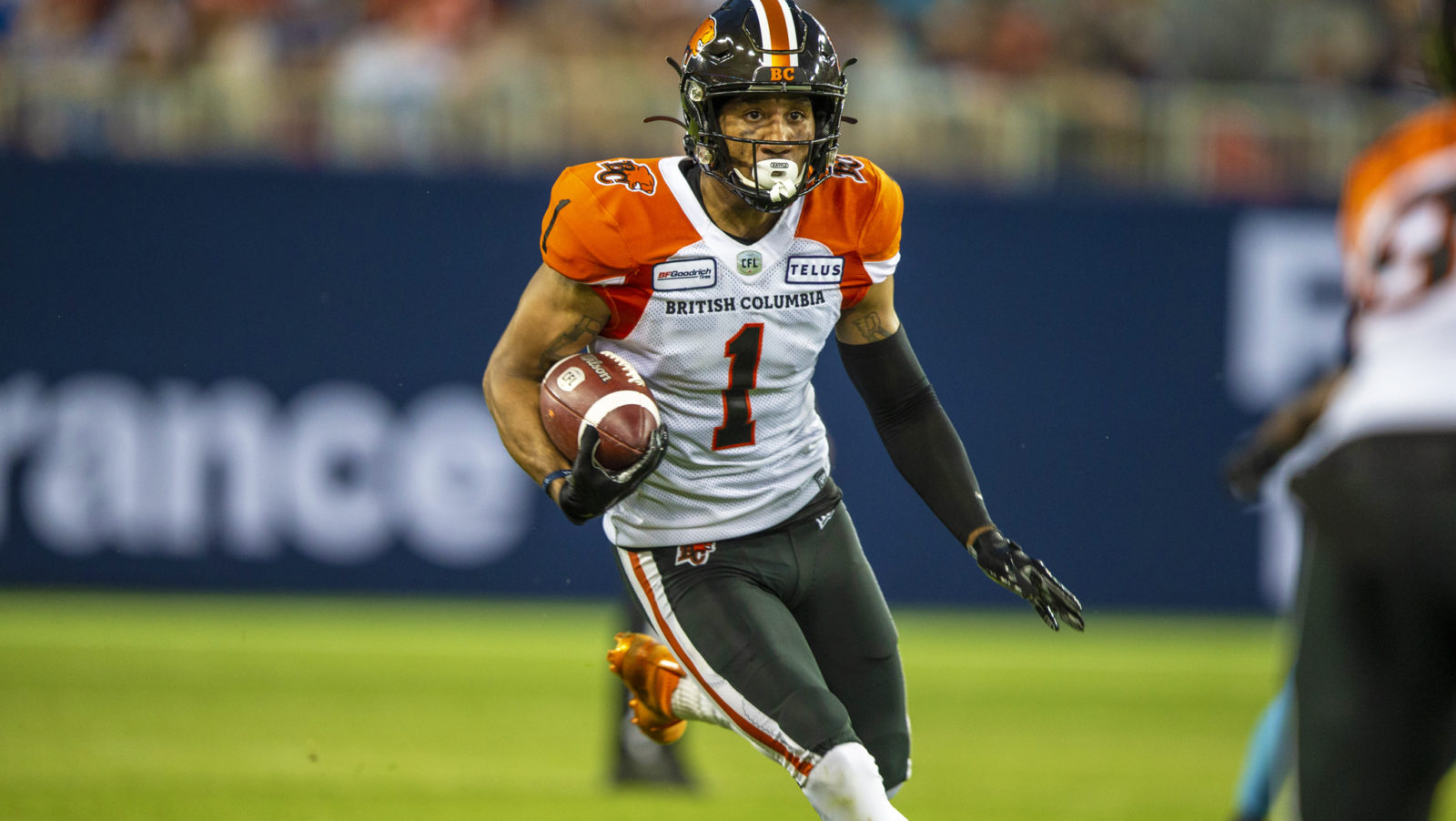 Three squads have received the unanimous vote of confidence ahead of their Week 17 contests.

The CFL.ca writers have all gone with the Hamilton Tiger-Cats, Saskatchewan Roughriders, and BC Lions to get the wins in their matchups.

Marshall Ferguson and Chris O’Leary are on the Als’ side this week as they welcome the Calgary Stampeders to Percival Molson Memorial Stadium. However, the others have gone with the Stamps to walk away with their fifth straight victory.

Here are the picks for Week 17.

RELATED
» Weekly Predictor: Stampeders are automatic after the bye
» Total CFL Pick ‘Em: Make your picks for Week 17!
» Be the GM in TSN CFL Fantasy presented by LeoVegas
» The DailyRoto 2019 Fantasy Guide 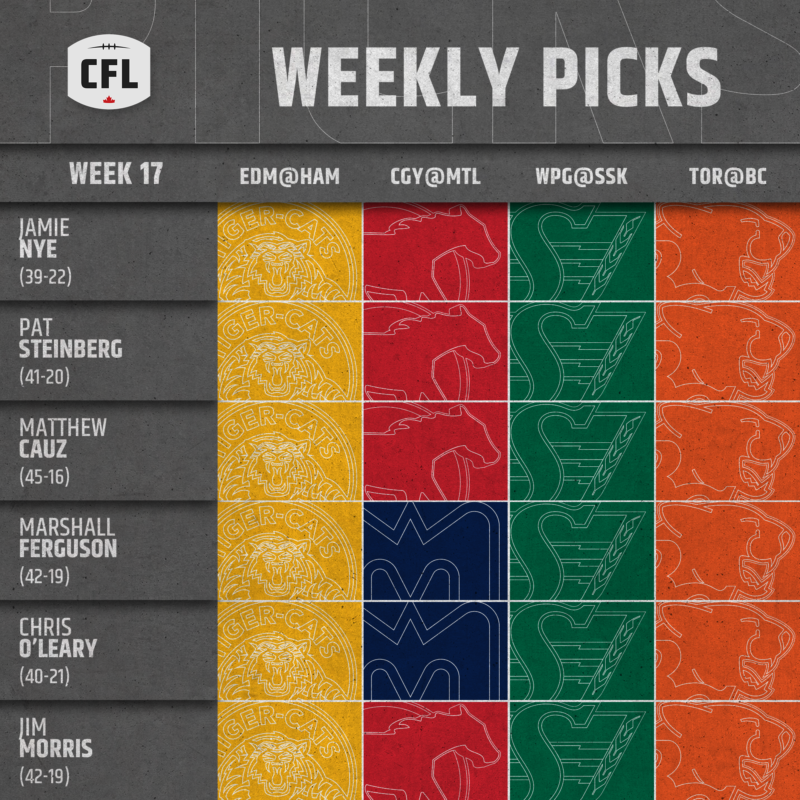 The Ticats will be looking to stay undefeated at Tim Hortons Field in 2019 when they welcome the Eskimos to open Week 17 action.

These two teams last matched up in Week 15. Hamilton hopped out to a big lead after a great first quarter, but after Logan Kilgore led the Esks back, it would take a last-minute drive down the field and a walk-off field goal from Lirim Hajrullahu to get the Ticats the win.

During the Week 15 showdown, Dane Evans tossed for 336 yards and three touchdowns, with the trio of scoring tosses coming in the first quarter. Bralon Addison led the team in both receiving and rushing with 126 yards and a score through the air and another 29 yards on the ground. Brandon Banks also had 72 yards and a receiving major himself in the win.

Logan Kilgore will once again lead the Eskimos in this game. The 29-year-old made his first start of the campaign against the Tabbies, completing 61 percent of his passes for 223 yards and two touchdowns. C.J. Gable also led the way when it came to air and ground, as he had 97 all-purpose yards on the game, but he didn’t manage to get into the end zone.

With a win and an Als loss, the Ticats would secure the East Division crown. However, if Edmonton can pull out the victory, they’ll clinch a spot in the postseason via the crossover.

Calgary will be looking to spoil the party in Montreal while taking home their fifth straight in the process.

In the first meeting of the year between these two squads, the Als managed to pull out a victory in overtime while Vernon Adams Jr. had a breakout performance.

The Stamps are at top form right now, and after getting Bo Levi Mitchell back, their sole goal is to defend their Grey Cup title in their home stadium come November. Mitchell has thrown for over 340 yards in each of his last two outings and will now have his top target, Reggie Begelton, back in the lineup. Ka’Deem Carey is also finished for the year, so it’ll be Don Jackson‘s backfield going forward.

Adams also returns to the Als’ lineup after serving his one-game suspension in Montreal’s last game against the Lions. In his last appearance — Week 15 against Winnipeg — the 26-year-old threw for 488 yards and four touchdowns. William Stanback had 147 rushing yards in Week 16 against BC. It was his highest total since Week 4, when he put up 200 yards on the ground. Eugene Lewis also had 114 yards and a touchdown against the Leos as well.

Montreal would clinch the first playoff berth since 2014 with a victory, and to do it in front of their home faithful against the defending Grey Cup champions would be something special. That will be easier said than done against the Stamps, but the Als have proven they can topple Calgary already this season.

The third and final regular-season meeting of 2019 between the Bombers and Riders could very well be the best installment of the trilogy.

Both sit with nine wins on the year, but Winnipeg sits in third just behind Saskatchewan in the West standings. The green and white took home the Labour Day Classic game before the Bombers struck back by capturing the Banjo Bowl a week later.

Chris Streveler had a career-best outing against the Ticats, tossing for 304 yards and a touchdown while running for 46 on eight carries. Kenny Lawler also had a career day, reeling in 10 catches for 144 yards against Hamilton. Andrew Harris has returned to the lineup, and while he didn’t have the best outing in Week 16, he torched the Als’ defence in Week 15 to the tune of 76 rushing yards and 112 receiving yards on five catches.

Cody Fajardo keeps leading his team to wins, and he completed 85 percent of his passes for 278 yards and three touchdowns against the Argonauts in his last outing — he also ran for 80 yards and a major. Emmanuel Arceneaux, Kyran Moore, and Shaq Evans all finished with a touchdown and Naaman Roosevelt had over 60 yards. The Riders’ defence absolutely swarmed Toronto in that game as well, posting six sacks, two interceptions, and a forced fumble.

Bragging rights and possibly home-field advantage could be on the line in this game. Expect another great game from the West rivals.

To finish off the week, the boatmen will invade BC Place looking to break out of their current two-game losing streak.

In Week 4, these teams played a tight game, with a walk-off single after a missed field goal by Sergio Castillo being the difference.

McLeod Bethel-Thompson was the man under centre for the double blue in that game, and if the Argos stick with the same plan as last week, it’ll be James Franklin in charge of the offence this time around. Franklin completed 70 percent of his passes for 208 yards and a touchdown against the Riders in Week 16. Chris Rainey had 50 rushing yards and 102 all-purpose yards on the game while S.J. Green led all receivers with 55 yards and a touchdown on five catches.

BC has won its last three games and will be looking to make it a third straight win at home. Mike Reilly had 309 yards and a touchdown pass, Lemar Durant had 107 receiving yards, Bryan Burnham caught seven passes for 77 yards and a touchdown, and John White rumbled for 78 yards and a score against the Montreal Alouettes last time out.

The Lions still have hope of capturing the crossover playoff spot, but a loss to the Argos would all but end that chance.