Riders’ Hughes: ‘I feel like this is a playoff game’

Riders’ Hughes: ‘I feel like this is a playoff game’

REGINA — Every week offers a chance for teams to get better and learn something new about themselves.

Heading into the final few games of the season, Saskatchewan Roughriders head coach Craig Dickenson is looking for his team to tighten the screws, clean up their game, and stay healthy.

“I don’t know if we can improve leaps and bounds at this point in the year and that was the message to the team,” he said to Riderville.com. “The improvement now is little, but if everybody improves a little, we improve a lot.

“So we’re just trying to get a little better individually, have a little more awareness of what they’re trying to do, and we’ve just got to stay healthy and stay strong because, at this point of the year, guys are starting to break down a bit and we’re hoping that’s not the case for us.”

RELATED
» Weekly Predictor: Stamps are automatic after the bye
» Landry: Purifoy taking next step as a defensive leader
» CFL.ca Game Notes: A look at Week 17 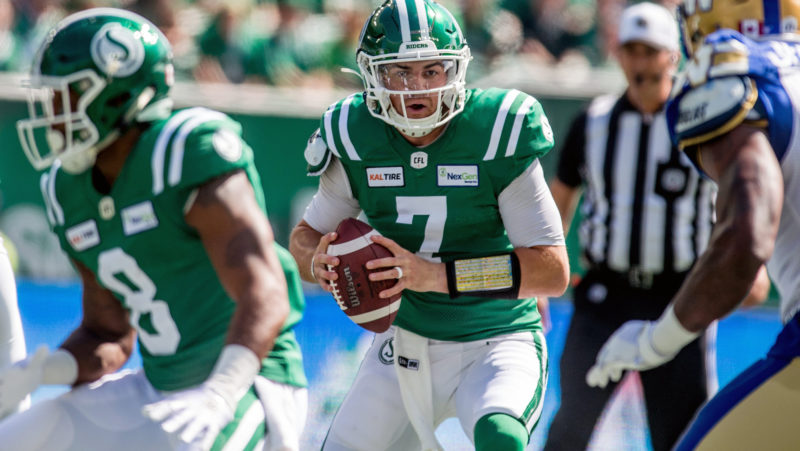 The Riders will be welcoming the Winnipeg Blue Bombers to Mosaic Stadium for the third and final regular-season meeting between the two rivals.

Winnipeg and Saskatchewan last met up during a back-to-back in Weeks 12 and 13. During the Labour Day Classic, the Riders were able to come out with a victory over the Bombers with help from Brett Lauther, who hit a walk-off field goal to secure the victory. In the rematch a week later, the blue and gold took home the Banjo Bowl following a big first half from their offence.

Cody Fajardo continues to be a standout for the Riders. In their Week 16 clash against Toronto, the pivot completed 85 percent of his passes for 278 yards and three touchdowns while rushing for 80 yards and another score.

He’ll have some added help against the Bombers on Saturday, as receiver Jordan Williams-Lambert will make his season debut. He’ll line up out wide and provide another weapon in the passing game alongside Shaq Evans, Kyran Moore, Naaman Roosevelt, Cory Watson, and Emmanuel Arceneaux.

The Saskatchewan defence was also fantastic against the Argos, piling up six sacks, two interceptions, and a forced fumble. In what should come as a surprise to no one, Charleston Hughes had a massive outing, finishing with three tackles and two of the team’s sacks on James Franklin.

It’s been a fantastic season for the 35-year-old, who has 41 tackles, 15 sacks, and four forced fumbles on the year. That has him in the conversation for the Most Outstanding Player and Defensive Player of the Year awards.

Dickenson called Hughes the team’s leader on and off the field, and Hughes’ teammates certainly agree with that assessment.

“I’ve kind of always taken a leadership role. My teammates are calling me a coach already but I’m like ‘Nah, I’m just a player trying to help get the best out of every player,'” Hughes said. “I’m trying to make plays and show everyone how I’m making plays on the field the best way I can.”

Hughes and the rest of the Riders’ defenders will be tasked with slowing down Chris Streveler and the Bombers’ offence.

“I don’t think we tackled him properly,” Hughes said of the Riders’ performance in that game. “He broke tackles on all ends of the field, so when it comes down to it, we’ve just got to make tackles.” 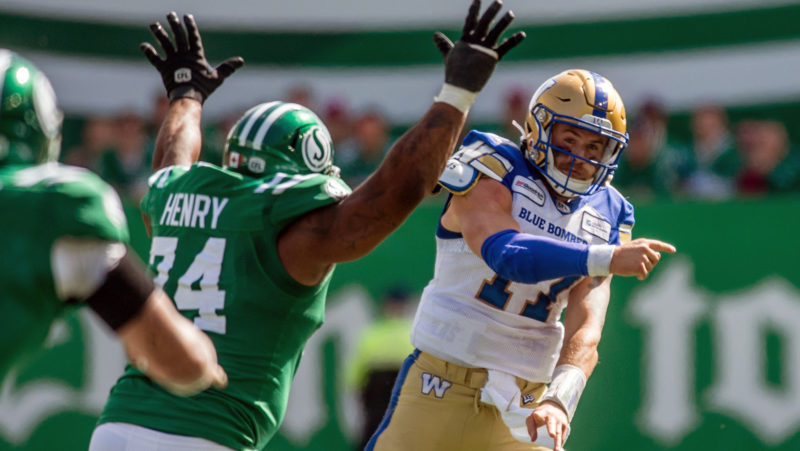 This will also be the first time that the Riders will see Andrew Harris this season. The running back missed both games against Saskatchewan while serving his two-game suspension. Harris, who’s also in the talks as a possible MOP this year, will be a centrepiece of the Winnipeg offence, something that’s not lost on Dickenson and the Riders.

“… We think they’re going to try to run it down our throats and we’ve challenged our guys to be able to match the physicality that Winnipeg is going to bring.”

The Riders and Bombers currently sit in second and third in the West Division, respectively, and with just five weeks remaining in the regular season, the margin for error is small. Anyone can still finish the year in first, which makes these final few games the most important of the year.

“I feel like this is a playoff game,” Hughes said. “It’s one of those games where it’s going to come down to us, Calgary, and Winnipeg to be the No. 1 team and it’s going to be a fight to the finish.”