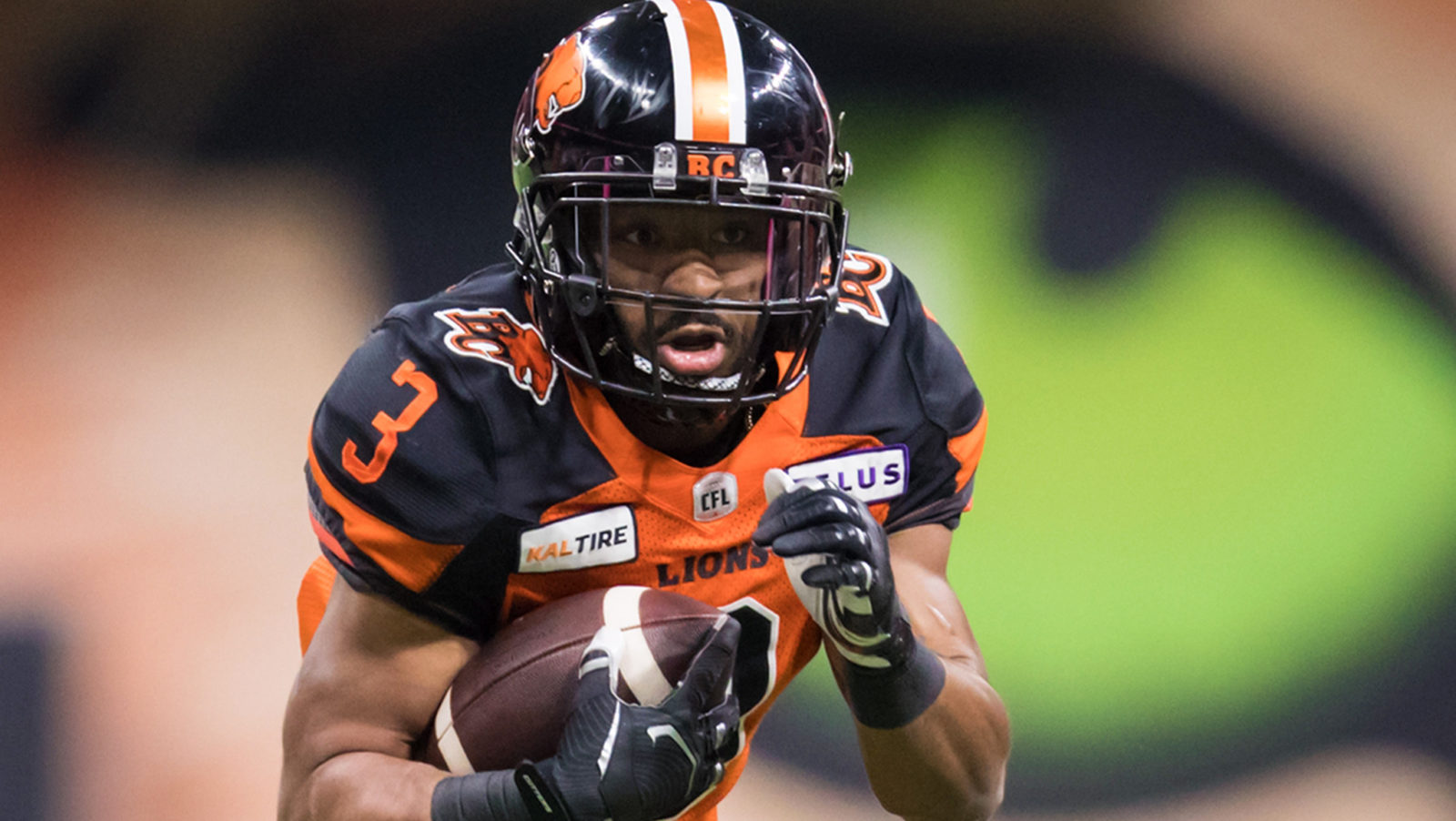 1. HAMILTON IS THE MOST EXOTIC PLACE IN THE CFL

Oh yes, it is, based on Friday night’s win over Edmonton.

On defence, they’ve got blitzes and disguises that spin the mind and give an opposing quarterback the feeling that he’s Alice and he’s full-on through the looking glass. The only thing Mark Washington’s defence lacks is, perhaps, safety Tunde Adeleke painted up like an actual cat, standing way back in centre field with a giant floppy top hat on.

On offence, they’ve got stunts and twists and bombs and little flips, going this way and that in a sleight of hand masterpiece suitable for a run on the Vegas strip.

Is THIS your card? No, it’s not. Because you only THOUGHT Bralon Addison had your card. Actually, Brandon Banks has it, waaaaay over there.

BONUS TAKEAWAY: Adding a fresh Tyrell Sutton to your line-up in October is like pulling your fall jacket out of the closet, reaching into the pocket and finding a $20 bill.

2. CFL DEFENCES REMIND US THAT SINCE IT’S AUTUMN, THERE IS YARD WORK TO DO

In the fall, you gotta get to mulching. And that’s what a number of CFL defences did over the weekend, the tone set by the Ticats on Friday night.

Both Saskatchewan’s and Winnipeg’s units fired up the grinders and handed out some slobber knockers in a low-scoring affair that featured a blur of bodies, bat-downs and fearsome one-on-one tackling.

The Alouettes’ defence – after a much less than desirable first half showing against Calgary, rose to the occasion in the second, in a punishing, shutdown showcase, led by safety Bo Lokombo’s string of insistent interruptions. Lokombo, by the way, sent word via social media afterword, that he likes to wind down from an afternoon of football mulching by taking a bubble bath.

He didn’t mention it, but when Bo Lokombo sleeps, he sleeps in a torpedo tube. Of that, I’m certain.

Calgary’s defence was also up to wood-chipper status in that game, more than good enough to win, had the offence not provided fresh baked goods for the Als every time they showed up on Montreal’s doorstep. If there’s a bonus takeaway to be had here, it’s this: The Stampeders are good, but not good enough to beat two teams on a given day, one being their opponent and the other being themselves.

Finally – and for it’s worth – the BC Lions’ defence completely manhandled the Toronto Argonauts’ offence. Or maybe they just stood there and let the Argos run into them. You decide.

Week 17 has gotten us ready for the fantastic fall colours ahead; Red, orange, yellow. Black & blue.

3. WAKE UP AND SMELL THE L.J. McCRAY HIGHLIGHTS

Who IS that guy?

He’s L.J. McCray and if you’ve been paying close attention, you already know he’s the rookie Saskatchewan defensive back who has locked down the field corner position for the ‘Riders.

McCray stepped up big against the Bombers on Saturday, registering seven tackles, two of them being perfectly-timed blasts, the kind that get lab coat-wearing seismologists out in California pushing their glasses back on their noses and scurrying over to their print-outs to see what the heck that was.

And then, a funhouse mirror kind of interception. One-handed, leaping, reaching back behind him, snuffing a late fourth-quarter drive at the Saskatchewan goal line.

McCray came out of college as a safety, but the Saskatchewan brain trust had him at SAM on their depth chart during training camp and then on the practice roster when the regular season began

“L.J. came in and he’s that good,” Roughriders’ defensive back Loucheiz Purifoy told me last week. “He listens. He takes coaching.”

It wasn’t until Week 7 that McCray got elevated to the active roster, the Riders thinking he’d be a good fit at corner. They were right. He’s been there ever since. And now everybody knows who he is after a tour de force performance against Winnipeg.

The BC Lions are really feeling it.

It’s true, part of the reason that they looked so dominant on Saturday night was that they played an Argonauts team that, right now, even a James Cameron search team would not be able to locate.

And then, the head coach’s post-game media conference left no more doubt and added some snarl to the team’s current feel-good world of busting practice moves.

Devone Claybrooks bit back on a reporter who’d asked him not to take it the wrong way, but that some might point out that the Lions beat Ottawa twice and also Toronto during their current four-game win streak.

“We’ve been showing up the last four or five,” Claybrooks said. “We’re gonna keep showing up. We’re gonna show up next week. Hopefully you’ll be there.”

“Make sure you’re on our flight,” he said, as he dismissively looked away to see who was next.

Claybrooks also mused about getting wind of someone with Edmonton connections talking about getting the brooms out and making it a sweep of the teams’ three-game regular-season series.

“Thanks for the bulletin board material,” Claybrooks deadpanned. “Like I need to get my guys any more crunked for that.”

BONUS TAKEAWAY: “Crunked” means excited or intoxicated, apparently. Guessing Claybrooks was using the former meaning rather than the latter. But if they pull off a miracle of miracles and ride a streak all the way to a Grey Cup win, the Lions can go ahead and get the other “crunked,” for sure.

We’ve got some fabulous Thanksgiving feasting ahead.

After you get by the carrot and celery plate of Ottawa vs Toronto (that can still be pretty good, by the way, if it comes with a nice ranch dressing) featuring two evenly-matched teams trying to prove they are not number nine, you get into some royal dining.

First-place Saskatchewan at second-place Calgary? That’s a fine lookin’ bird coming out of the oven, a deserving centrepiece for the table. A Saskatchewan win and they’re four points clear, a first-place finish just ahead. A Calgary win and all hell breaks loose, especially if Winnipeg beats Montreal the next day.

That Als/Bombers game is the nice slice of ham of the weekend, with bad blood between the two – and Winnipeg’s memory of blowing a 24-point lead in Montreal just three weeks prior – providing a delectable honey glaze.

But do not overeat the meat, and as the saying goes: “keep your fork, duke, there’s pie,” because here comes dessert right after. The surging BC Lions will stare down Edmonton in what amounts to a playoff game. The Lions, feeling their dance-contest oats lately, take on an Eskimos team that is desperate not to let a four point cushion get shaved to two in the race for the final playoff spot.

The whipped cream? The Eskimos’ defence crushed BC’s offensive line in two wins early in the season, sacking quarterback Mike Reilly 12 times and rag-dolling him on countless other occasions. In the last few weeks, though, the BC offensive line has been waaaay better. I can’t wait to see how this line of scrimmage battle goes.

It’s a good thing that juicy, fatty football games don’t, literally, pound calories into your system, otherwise all of you participating in Grey Cup Fit Up would be screwed this weekend.

AND FINALLY… Saskatchewan linebacker Cameron Judge said it, and all of Winnipeg’s opponents are thinking it. “Stop the run,” Judge said during a halftime interview. “Stop the run.” Either Chris Streveler finds a passing game, or the Blue Bombers’ season of promise continues to fade away.