Accuracy Grades: Who was on target in Week 17? 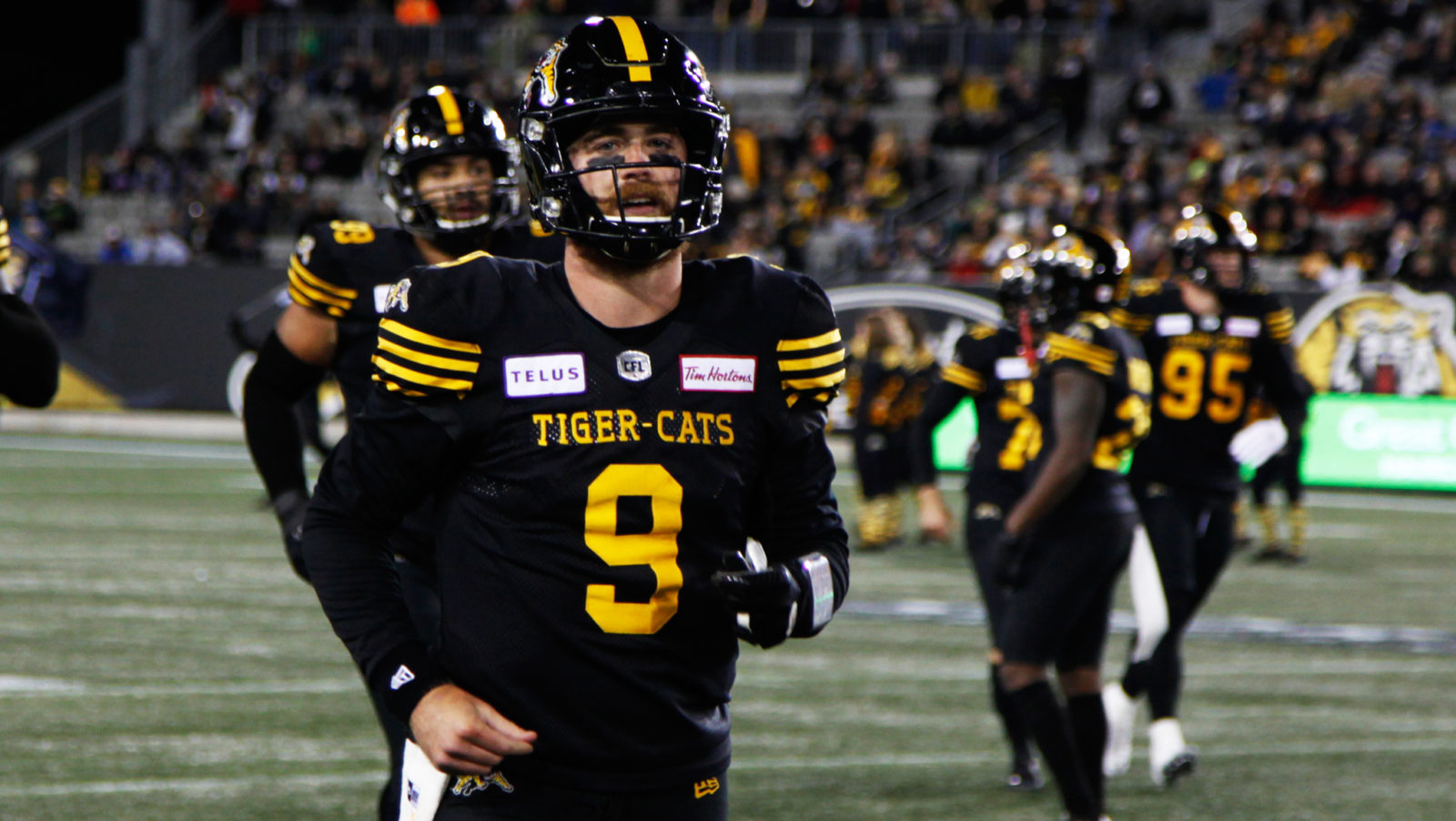 Accuracy Grades: Who was on target in Week 17?

As the playoff picture becomes clearer, quarterback play and the need for high level execution has come into focus as well.

These accuracy grades are just one aspect of the greater picture of who is peaking at the right time but they do tell a story yet again this week.

Here is a look at the quarterback accuracy grades for Week 17: 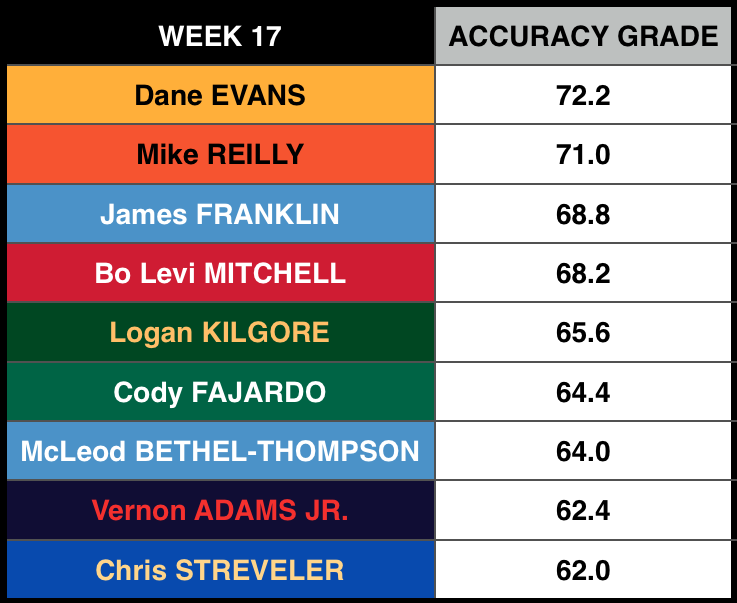 It’s no secret that Chris Streveler has struggled in recent weeks against Hamilton and now Saskatchewan, especially on passing downs. Thankfully for Streveler, thrown away passes at the feet of receivers or out of bounds to avoid pressure are not counted in the grading system, as those have gone up for him in recent weeks with an obvious emphasis to protect the football better as the Bombers window for error has narrowed significantly.

Vernon Adams Jr. once again did Vernon Adams Jr. things, posting a below average accuracy grade but finding a way to get the win in an impassioned rage against the status quo of quarterback expectations while McLeod Bethel-Thompson in relief duty against the Lions came in the bottom three.

Cody Fajardo and the Riders continue to work over the Bombers but this effort was not as flashy as past outings. A couple of big balls down the rail to Shaq Evans essentially saved Fajardo from reaching down near Adams Jr. and Streveler ranks.

In the loss, Logan Kilgore still completed 72 per cent of his passes, albeit while only producing one touchdown drive and a couple of field goals while being sacked five times by the Hamilton defence. Bo Levi Mitchell continues to work himself back into form, landing just off the Week 17 podium. 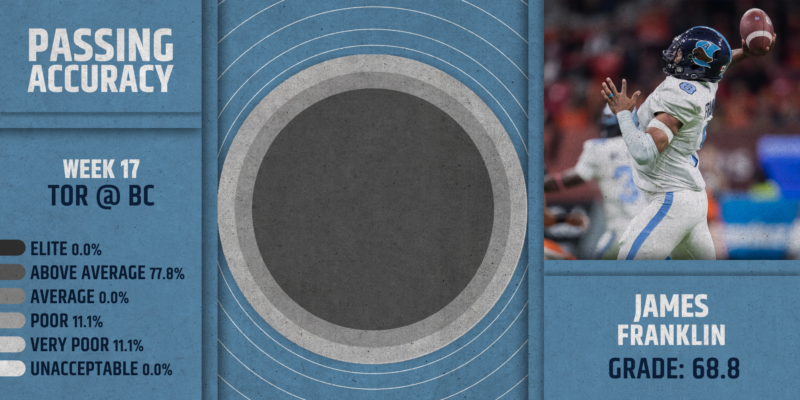 Before you dismiss this, hear me out. Throwaways, knock downs and balls batted at the line of scrimmage do not count in the grading process, meaning Franklin’s interception on the Argos first play from scrimmage didn’t affect his grade. Add in a limited number of possessions due to turnovers and bad field position and you get a limited sample size where Franklin began taking safe throws just for the sake of getting a completion. THAT is how you get a QB on the losing end of a 55-8 score placing in the top three in passing accuracy. 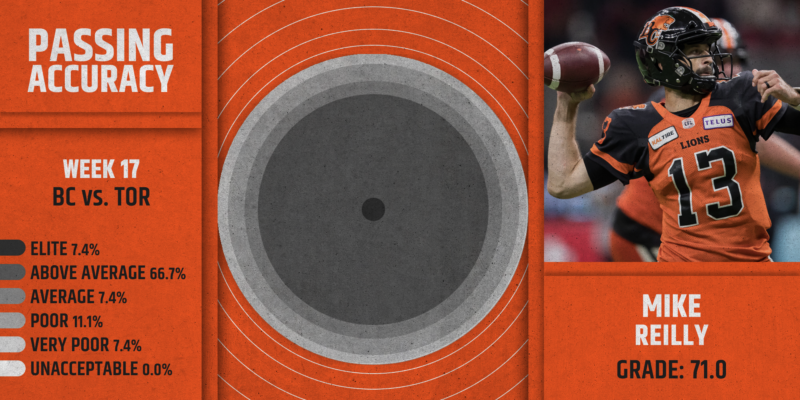 Where was this all year?! The vertical passing game, the pass protection and variety of offensive weapons all working in concert with each other? I wish this was the version of the BC Lions we got since Week 1 but for now I’ll settle for picking them to put even more heat on the Esks with a win in Edmonton this Saturday. 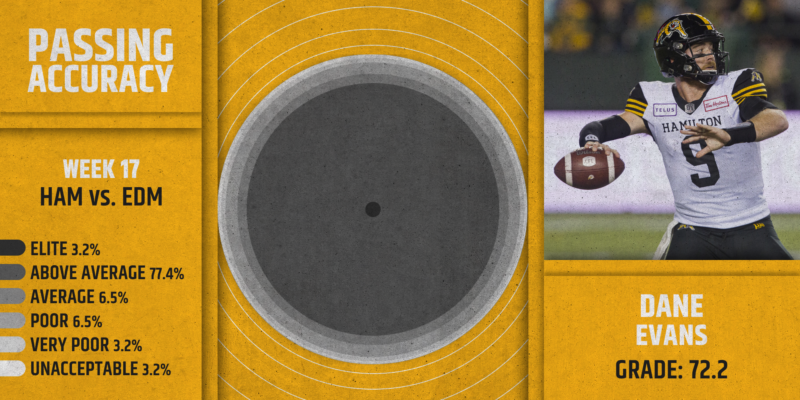 He did it again. A clean sheet again for Evans who completed 75 per cent of his passes for two touchdowns and no interceptions. Mixed in were a couple of absolute dimes including one with pressure in his face to the corner as Brandon Banks ran away from coverage.

Interestingly, with the Week 17 accuracy effort Evans is now tied with inactive Matt Nichols for second in CFL passing accuracy in 2019. Here are the rest of the updated season standings: 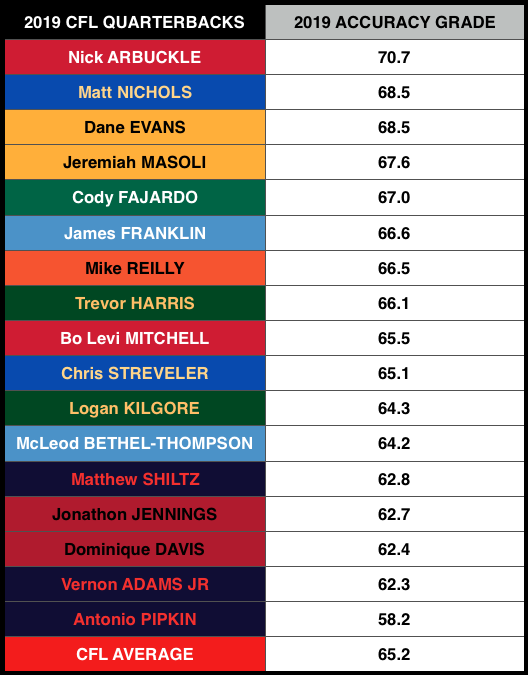 Aside from Evans nipping at the heels of both Nichols and Arbuckle for the overall lead, there was plenty of movement this week. Logan Kilgore hopped McLeod Bethel-Thompson for 11th in the CFL while Bo Levi Mitchell passed Chris Streveler for ninth.

The biggest jump of the week saw Argos QB James Franklin on his nine pass attempt outing in Vancouver jump both inactive Trevor Harris and his opponent in Week 17, Mike Reilly. It’s the first time all season an Argonauts quarterback has finished a week in the top six league wide.

There are plenty of juicy matchups coming this weekend including Streveler vs. Adams Jr., Fajardo vs. Bo Levi in Calgary and Mike Reilly returning to his old stomping grounds yet again with a chance to turn the crossover and his old franchise on their respective heads.