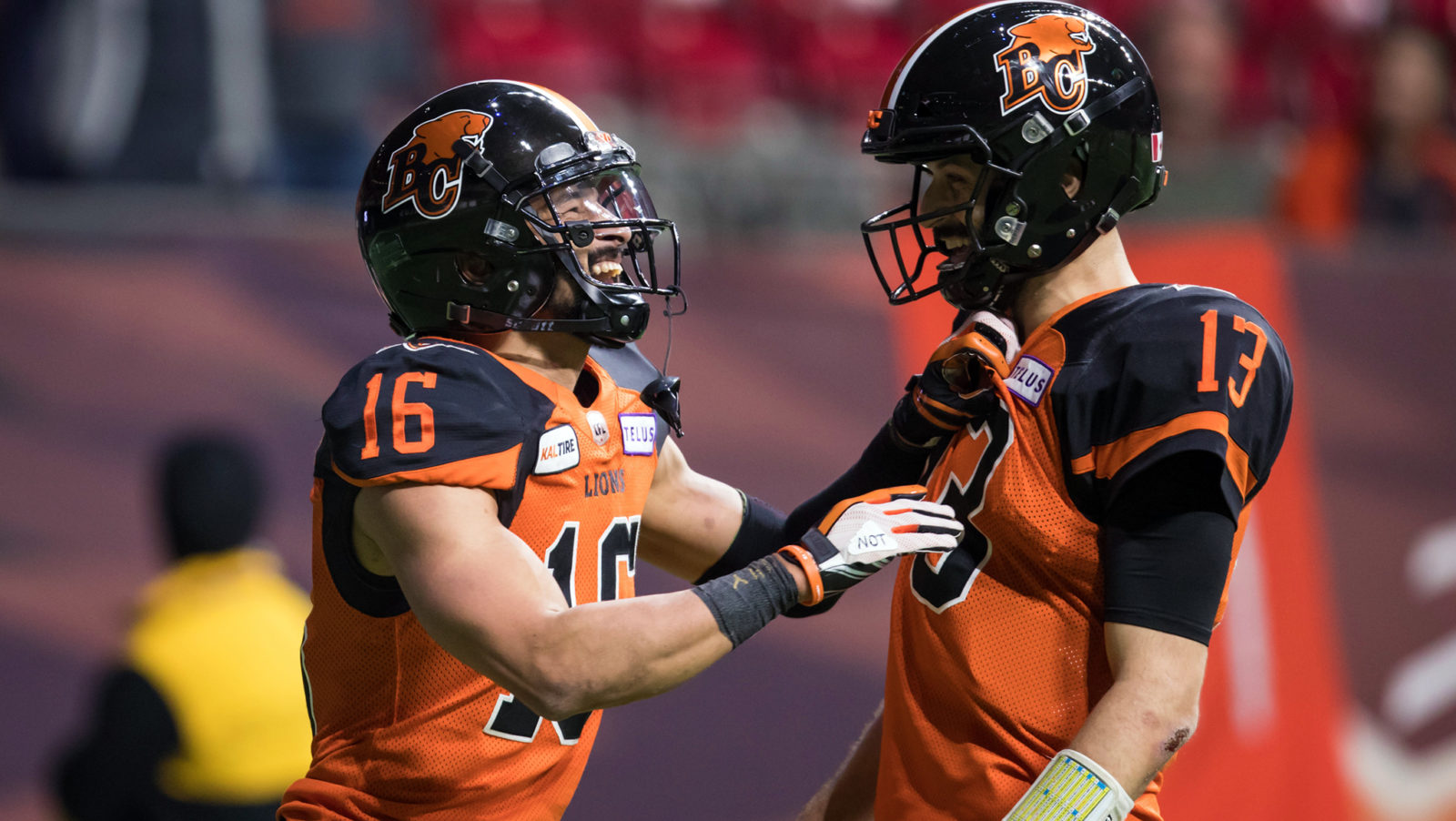 Life is good for BC football fans. It’s also good for Fantasy users entering Week 18 of TSN CFL Fantasy Football Presented by Leo Vegas. Winners of four straight games, the Lions have roared in many a Fantasy lineup, and with an improved offensive line, stand a chance to continue its late-season run of the CFL jungle.

PLAY CFL TSN FANTASY
» Sign up and set your lineup for Week 18!
» REDBLACKS’ Arndt to start against Argos

Mike Reilly ($10,247) is back to five-digit value, courtesy of a four-game run that has seen him average 306 passing yards and 12 total touchdowns (10 passing, two running). The Eskimos still own the league’s top defence, but this isn’t the Reilly that was held to a combined 306 passing yards and one major in the previous two games. Expect Vernon Adams Jr. ($11,345) to test the Blue Bombers secondary that has allowed a league-high 25 completions of better than 30 yards. Adams and running back William Stanback ($7,275) are a big reason why the Alouettes are second in red zone success (64%), a number that will be challenged by Winnipeg’s second-ranked red zone defence (49%). The Stampeders held Cody Fajardo ($10,268) to 89 passing yards and two interceptions in Week 4. Fajardo comes in having thrown for at least 254 yards in four of his last five games. If the Argos roll with McLeod Bethel-Thompson ($8,353) at pivot, he would be a strong value play. He’s sporting a 13:3 TD:INT margin since Week 8.

Yardage shouldn’t be an issue for Bo Levi Mitchell ($9,285), who’s averaging 384 yards in his last three starts. Touchdowns, however, are an issue: Mitchell has thrown multiple majors in just two games this season. Chris Streveler ($9,276) has to be an effective runner in order to juice up his inconsistent passing game. Don’t expect too many Fantasy users lining up at the chance to start either Logan Kilgore ($6,099) or new REDBLACKS starter Will Arndt ($5,000).

Like his quarterback, John White ($7988) has been a hot hand for Fantasy users, rushing for 279 yards over the past three games. He’s also tied for second with six runs of better than 20 yards. In what could be a high-scoring affair, Andrew Harris ($9,435) should have enough touches to flirt with repeating the 188 yards from scrimmage he produced against the Alouettes in Week 15. Stanback, who is only 46 yards away from crossing the 1,000-yard mark, will have to attempt reaching the milestone against a Winnipeg defence that is limiting opponents to a mere 67.4 yards per game on the ground. William Powell ($7,575) is in a two-game skid that has seen him manage just 85 yards on 22 carries. He’s scored just one rushing touchdown since Week 12. C.J. Gable ($7,739) is out for Saturday’s game against the Lions, opening the door for Shaq Cooper ($4,807) to come off the practice squad. Keep in mind that Cooper did rush for 128 yards and a major in a Week 7 win over the Argos.

The Stamps have to be pleased with Don Jackson’s ($6,417) return (58 yards, one touchdown) in last week’s loss over the Alouettes. He could see more than 12 carries against the Roughriders. It’s too hard to put trust in James Wilder Jr. ($8,086) at this stage of the season. An inexperienced pivot means Mossis Madu ($6,351) gets a heavy workload against a Toronto defence that’s allowed a league-high 46 big plays. As for the back end, Toronto’s Chris Rainey ($5,429) could be in line for 200-plus all-purpose yards against Ottawa, which has given up seven big plays on special teams.

It’s not a sweep for the Lions, as Calgary’s Reggie Begelton ($11,121) gets the slight edge over BC’s Bryan Burnham ($10,890). Begelton recorded the first of his five 100-yard games this season at the expense of the Roughriders in Week 4. Not only does Burnham lead the league with 12 catches of over 30 yards, he’s also racked up a league-best 26 receptions on second down. Eric Rogers ($7,970) has at least 14.2 Fantasy points in his last four games. Shaquelle Evans ($7,831) is the lead target for Saskatchewan, with Kyran Moore ($5,722) settling into the WR2 role for the Riders. Count on Derel Walker ($8,949) to rebound from last week’s letdown with a solid outing against a REDBLACKS defence that’s allowed 20 touchdown passes this season. Despite all the challenges at pivot, Dominique Rhymes ($6,863) is only 50 yards away from the 1,000-yard mark. Life without Trevor Harris has been anything but blissful for Edmonton’s receiving corps. Play DaVaris Daniels ($7,402) and Greg Ellingson ($6,821) at your own risk.

The Roughriders ($5,972) have totalled 29 fantasy points over the past two weeks. The Bombers ($5,985) have struggled with forcing turnovers of late but have recorded at least four sacks in four of their last five games. Calgary ($5,330) had just one Fantasy point last week; there’s definitely room for improvement against Saskatchewan. BC ($4,295) has put up double-digit points on the defensive side of the ball three times in the last four games.