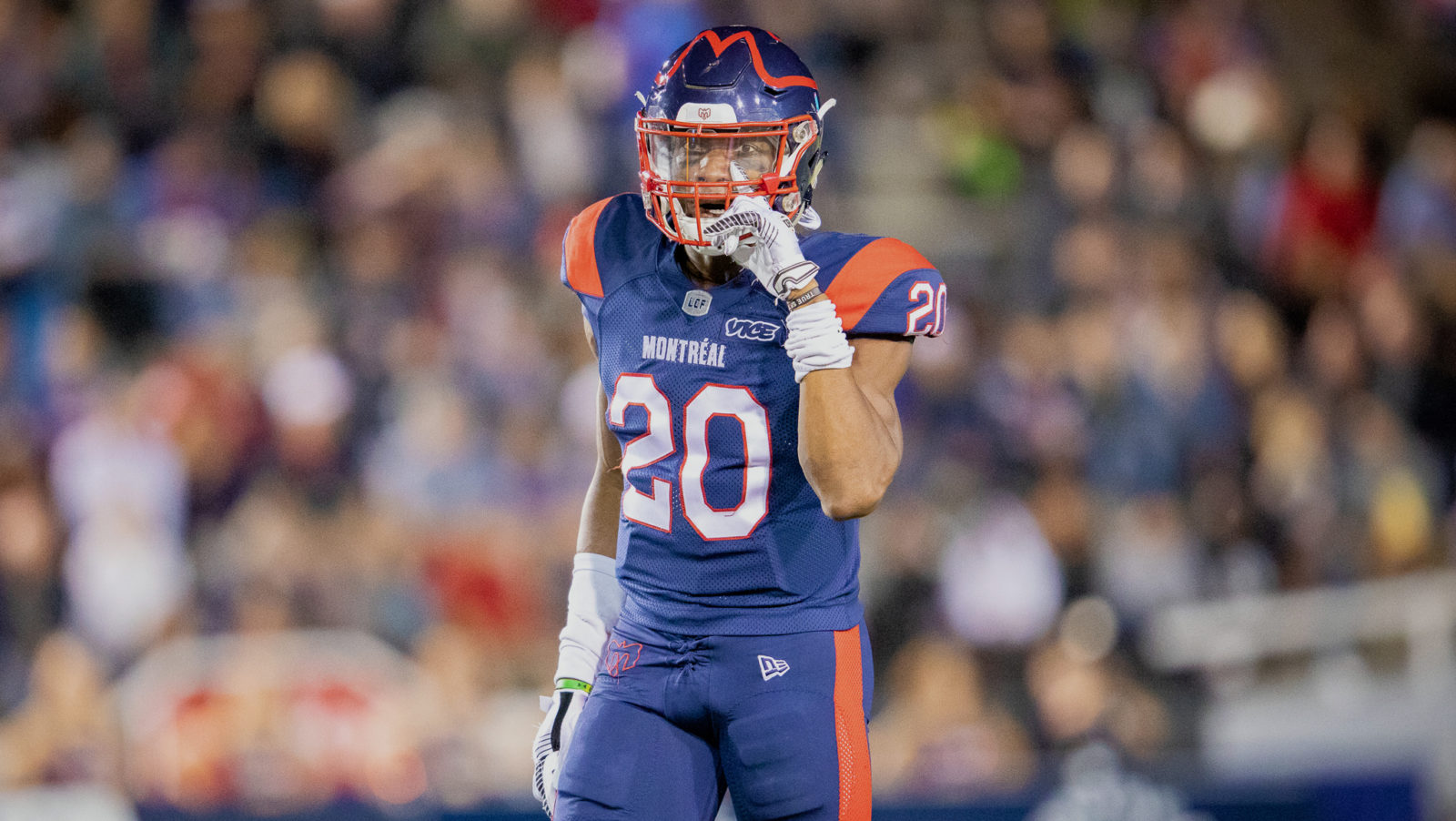 Calgary Stampeders’ receiver Josh Huff was putting the finishing touches on a big catch-and-run play last week when a torpedo known as Bo Lokombo blew up that play, in spectacular fashion.

The Montreal Alouettes’ free safety lowered his left shoulder as he approached his target at pretty good speed, knocking Huff into next week and the ball to the turf, where Lokombo’s teammate Dominique Termansen fell on it.

It’s the kind of hit that is becoming habitual.

A few weeks prior to that play, Lokombo turned in what might well be the hit of the season, using his right shoulder this time, as he met BC Lions’ running back Wayne Moore head-on with a blast that must have rattled all the dishes at those fancy restaurants down in Old Montreal.

Lokombo likes being a Bo-listic missile. Likes making a big play. “It feels good, man,” he said, with a laugh. That meant his answer to the question of what it’s like to make that kind of contact was a little like his style of play; straight to the point.

Lokombo is still reasonably new to the position he is playing but that has not stopped the 28-year-old converted linebacker from impressing onlookers and scaring the bejeezus out of the opposition with big-time hits that can change the feel of a game in an instant.

“I’m loving it so far,” he said of hanging back and playing centre field for the Alouettes, in a defence that is getting steadily better by the week.

Pressed into emergency action when Montreal’s starting safety Taylor Loffler went down with a season-ending knee injury, Lokombo is quickly getting the feel for a position he’d only previously had fleeting experience with.

In doing so, he’s looking an awful lot like the man he’s filling in for at the position.

Loffler cemented his reputation as a thunderously hard-hitting safety almost right away when he first got to the CFL with the Winnipeg Blue Bombers, in 2016. Lokombo and Loffler are kindred spirits in the sense that they each like to come into the picture like a wrecking ball.

“I’ve always believed in clean hits,” said Lokombo, born in Kinshasa, Zaire — what is now known as the Democratic Republic of the Congo — but who grew up in Quebec and BC when his parents emigrated to Canada.

“I’ve always believed in a nice, good tackle. And I think fans like to see that. They like to see that football is still alive as far as the physical aspect of it,” he said. “That’s always what I’ve liked the most about the game.”

In college, Lokombo played strong-side linebacker (SAM) with Oregon. When he turned pro with the BC Lions in 2014, joining them midway through that season, he was originally sent into meetings with the defensive backs, a bit of a harbinger of what was to come, perhaps.

However, when he showed up for training camp in 2015, he was slotted in at weakside linebacker (WILL), where he remained for the two seasons he’d spend in Vancouver, before heading for NFL tryouts in 2017.

And when he returned to BC in 2018, he played WILL once again, impressing with a 71-tackle total along with two interceptions and four sacks.

While in BC, Lokombo got at least a taste of what playing safety could be like for him, with the Lions spotting him back at rover, he figures, five or so times a game depending on the package they were running.

Still, he was a linebacker through and through, so when the call went out for him to take over from Loffler, he was anxious.

“I’m not gonna lie. I was a bit nervous,” he admitted. “It’s kinda rare to have a guy go from linebacker to safety. It doesn’t happen very often.”

Coaches had often told him, Lokombo said, that his quick feet would make him a pretty good candidate for the secondary. And his own experiences in playing a lot of basketball illustrated to him that he did well when he operated in space. So while he was a trifle concerned ahead of his first start at safety in a game against Toronto in Week 11, he was also feeling excited at the prospect of testing himself at a new position.

He had good support from everyone around him, too.

“The coaches and all my teammates believed in me and they said ‘just go play.’ And that’s the biggest thing. No matter what, you’re gonna make mistakes. But play fast, and play hard and have fun.”

Lokombo had eight tackles in that win over the Argos, with the Als then getting a bye week to follow. It was Week 13 when he added six more tackles against the Lions, punctuating the performance with his crushing hit on Moore — by the way, it should be noted that Moore was pretty impressive too, in that collision, hanging on to the ball and bouncing right back up on his feet afterward.

In the six games he’s started at free safety, Lokombo has made 35 tackles. Nine of them came last week against Calgary, in a game where he added a key knockdown as he blitzed his way into the backfield, rising up to swat away Bo Levi Mitchell’s pass attempt on third and ten, late in the fourth quarter.

God numbers, good play. Then again, Lokombo knew he needed to do that if he was going to help the Montreal defence carry on.

“You gotta remember,” he said, “I’m replacing somebody who’s a three-time all-star in Taylor Loffler. Pretty big shoes to fill.” 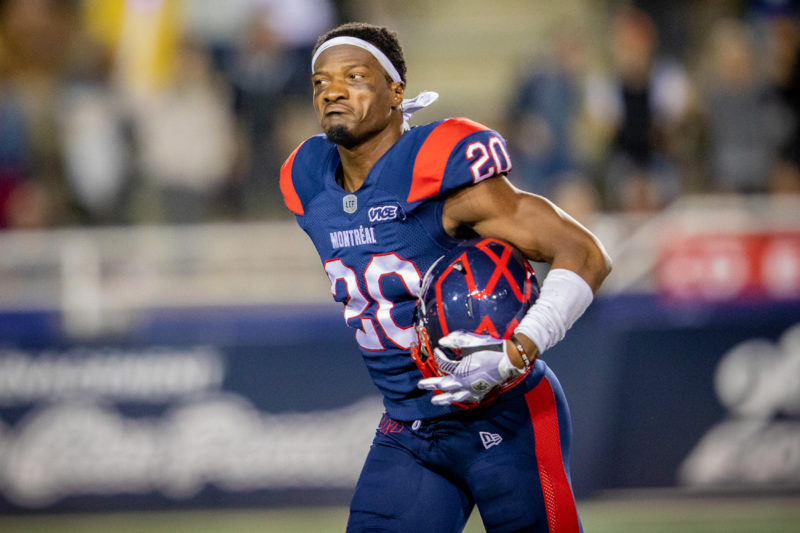 Montreal Alouettes safety Bo Lokombo celebrates after a defensive stop against the BC Lions (MontrealAlouettes.com)

And how does one go about trying to fill those shoes? By trying to knock the ball carrier out of theirs, of course.

Lokombo has kept that beat going for the Alouettes, providing solid hitting while endeavouring to get better and better at pass coverages, and at deciphering the offence’s intentions from his new spot deep in the middle of the defence.

“At safety there’s less reaction, more reading,” said Lokombo, though he added that there are certain elements of his old job as a linebacker that are assisting him in his adjustment.

That was a position that he’d come to master pretty well with the help, he says, of great coaches like Don Pellum, now with UCLA but who coached Lokombo at Oregon. Then there was John Holland, linebackers coach with the BC Lions, now with the San Francisco 49ers.

“I grew up learning proper technique,” said Lokombo, who also credited Mark Washington – the defensive coordinator with the Hamilton Ticats who coached Lokombo in BC – with turning him into a more well-rounded defender.

“He played a big part in developing my skills at DB,” Lokombo said of Washington’s decision to dangle the linebacker’s toes in the free safety waters, last season.

That bit of game action, no doubt, was helpful to Lokombo when he was tossed into the deep end after Loffler’s injury.

After a half dozen games, Lokombo already looks like a seasoned safety, even if there is much, much more for him to do before he can be considered a master.

“When I get really comfortable – and I’m feeling more comfortable at that position – then I’ll really be able to fly,” he said.

That’s certainly something to contemplate. Bo Lokombo is already blasting plays to smithereens.

And he hasn’t reached full throttle yet.